NISKAYUNA, NY and GREENVILLE, SC – May 25, 2022 – The U.S. Department of Energy’s (DOE) Office of Fossil Energy and Carbon Management announced the selection of two GE proposals worth more than $12 million as part of their efforts to accelerate the path towards a 100% hydrogen combustion future. This funding will allow GE to develop technologies to integrate higher levels of hydrogen into its gas turbine platforms—with a specific focus on GE’s F-class gas turbine fleet—and accelerate the transition towards a zero-carbon energy future.

GE’s projects are part of six projects totaling $25 million in federal funding announced by the DOE last week. These awards represent another key milestone in GE’s efforts to advance hydrogen technologies for gas turbines and combined cycle power plants, which will help achieve significant reductions in carbon emissions. Last month, GE worked with Long Ridge Energy Terminal in commissioning and demonstrating the first advanced class hydrogen-burning power plant in Hannibal, Ohio.   The plant is powered by a GE 7HA.02 gas turbine, which can burn up to 20% hydrogen by volume in the gas stream initially, with GE’s technology roadmap developed to more over time.

Jeffrey Goldmeer, Emergent Technologies Director at GE Gas Power, says the new projects with the DOE will be a major catalyst to accelerate GE’s progress toward 100% hydrogen combustion, stating, “We applaud the DOE’s leadership, commitment and investment in hydrogen combustion. The investments the agency is making will help us accelerate the development and testing of retrofittable F-class combustion systems capable of operation on 100% hydrogen using a combination of micro mixer and axial fuel staging technologies.”

Keith McManus, who leads the Combustion Team at GE Research and is leading GE Research’s project, is excited about the project and opportunity to advance the integration of hydrogen to create a substantial increase in power plant efficiency, stating, “As everyone close to hydrogen technology knows, the technical challenges are considerable when you’re talking about being able to run a turbine on 100% hydrogen. Having worked on hydrogen combustion technologies for many years, we are aware of the many challenges and have made considerable progress over time. Working in cooperation with the DOE, we’re confident we can make even more strides that get us closer to 100%.” 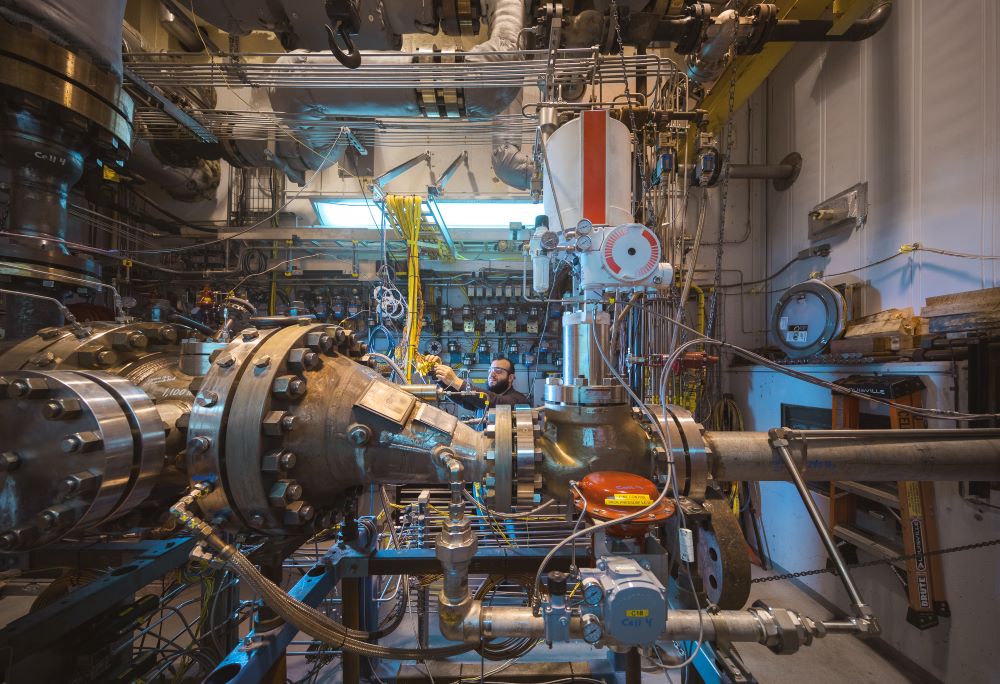 Caption: Pictured is one of more than a half dozen test cells in GE Research’s combustion test facilities. Located on its research campus in Niskayuna, these facilities can test new components and fuels like hydrogen for its gas turbine and jet engine platforms.

GE Research’s project, which totals close to $7 million, will study the operation of hydrogen-fueled turbine components on special rigs in its combustion test facility in Niskayuna.  The team will examine how gas turbine efficiency can be improved for both simple- and combined-cycle power generation applications.

GE Gas Power’s award, totaling nearly $6 million, will focus on the study of highly reactive hydrogen fuels and addressing the challenges associated with this type of combustion dynamics. As part of their program, the project team will develop and test gas turbine components with natural gas-hydrogen fuel mixtures and up to 100% hydrogen.

Over the past years, GE has collaborated with DOE to research and develop combustion solutions for more sustainable power generation.  GE’s DLN2.6e combustion system that is standard on current GE HA gas turbine offerings was developed as part of the DOE’s High Hydrogen Turbine program.  This technology has enabled the DLN 2.6e combustion system to operate on blends of natural gas and hydrogen. Further, GE has developed a technology roadmap to achieve 100% hydrogen in this platform in the next decade. GE has more than eight million operating hours on hydrogen and similar low-BTU fuels from more than 100 units.

Final terms of the projects award selections will undergo final negotiation and confirmation with the DOE in the coming weeks.

In addition to the power sector, GE has been a leader in advancing hydrogen technologies in the aviation sector as well. CFM International, a 50-50 joint company between GE and Safran Aircraft Engines, is working with Airbus on a hydrogen-fuel demonstration with an aircraft engine.

About GE Gas Power
GE Gas Power is a world leader in natural gas power technology, services, and solutions. Through relentless innovation and continuous collaboration with our customers, we are providing more advanced, cleaner, and efficient power that people depend on today and building the energy technologies of the future. With the world’s largest installed base of gas turbines and more than 670 million operating hours across GE’s installed fleet, we offer advanced technology and a level of experience that’s unmatched in the industry to build, operate, and maintain leading gas power plants. For more information, please visit www.ge.com/power/gas and follow GE’s gas power businesses on Twitter and LinkedIn.

About GE Research
GE Research is GE’s innovation powerhouse where research meets reality. We are a world-class team of scientific, engineering and marketing minds working at the intersection of physics and markets, physical and digital technologies, and across a broad set of industries to deliver world-changing innovations and capabilities for our customers. To learn more, visit our website at https://www.ge.com/research/.

“As everyone close to hydrogen technology knows, the technical challenges are considerable when you’re talking about being able to run a turbine on 100% hydrogen. Having worked on hydrogen combustion technologies for many years, we are aware of the many challenges and have made considerable progress over time. Working in cooperation with the DOE, we’re confident we can make even more strides that get us closer to 100%.” - Keith McManus, Technology Manager, Combustion Technologies, at GE Research
Share to social
Media Contacts
MEDIA RELATIONS