NISKAYUNA, NY – March 31, 2022 –  Are we moving closer to the day when diabetes is no longer monitored and managed with blood sugar tests, insulin injections and drug treatments?  A GE Research-led team, which includes The Feinstein Institutes for Medical Research, UCLA Samueli School of Engineering, Yale School of Medicine, and Albany Medical College, has demonstrated the ability to prevent or reverse the onset of diabetes in studies of three different preclinical model systems. The team reported their findings in the latest issue of Nature Biomedical Engineering.

The reported findings represent a significant milestone in the field of bioelectronic medicine, which is exploring new ways to treat chronic diseases such as diabetes using electronic devices to modulate the body’s nervous system. For the past 6 years, GE Research has been a pioneer in ultrasound-based bioelectronic medicine, developing a novel, non-invasive stimulation technique that uses ultrasound to stimulate specific neural pathways within organs that are associated with disease. The diabetes studies reported in the Nature Biomedical Engineering article were supported in part by the Biological Technologies Office (BTO) of the Defense Advanced Research Projects Agency (DARPA). 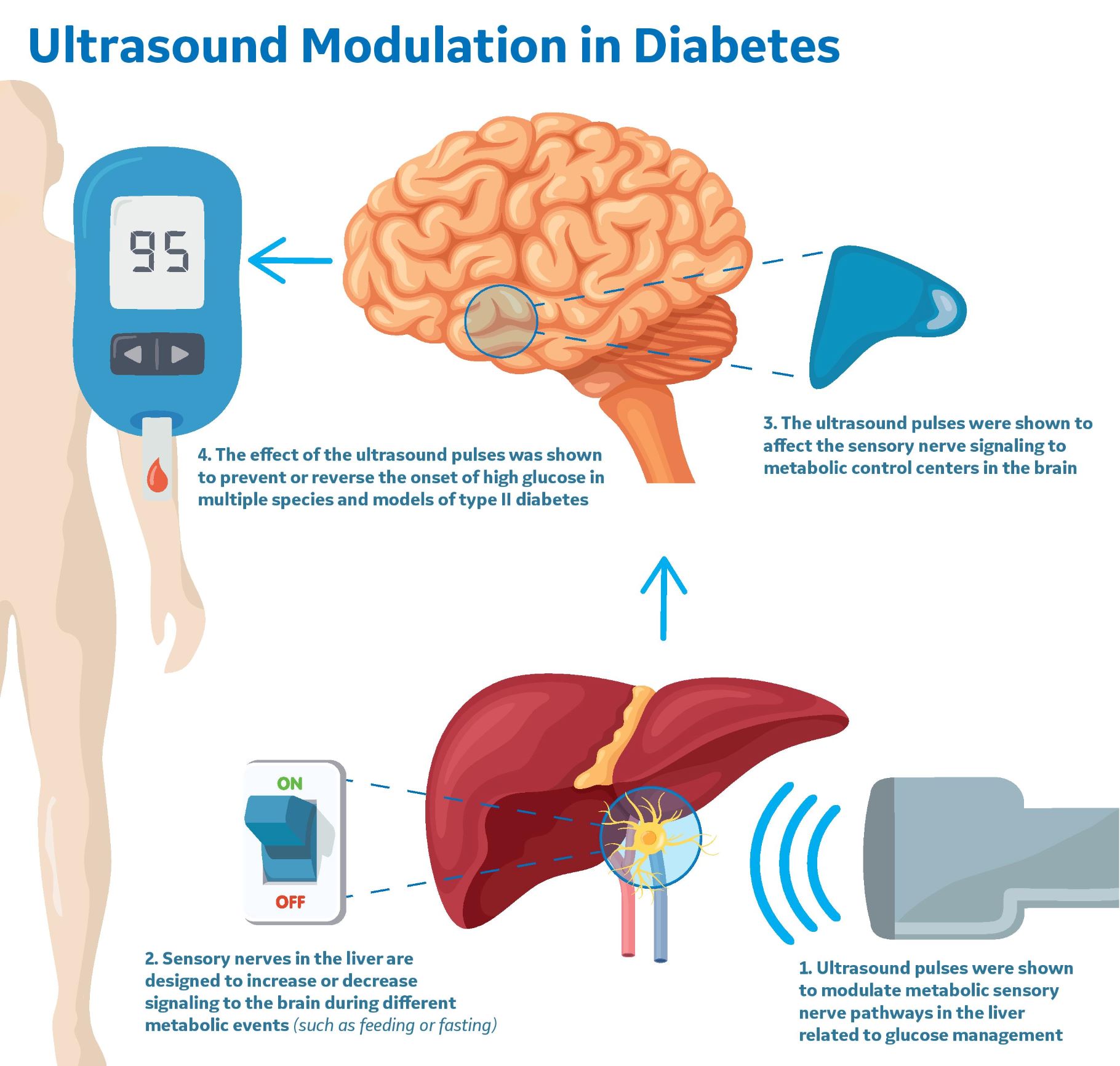 Christopher Puleo, a senior biomedical engineer at GE Research who co-led the diabetes studies and a corresponding author of the Nature Biomedical Engineering article, is excited about the progress that the team has made to demonstrate this potential new treatment for diabetes, stating, “We have shown that ultrasound can be used to prevent or reverse diabetes in these preclinical studies.  We’re now in the midst of human feasibility trials with a group of Type-2 diabetic subjects, which begins our work toward clinical translation.”

“The use of ultrasound could be a game-changer in how bioelectronic medicines are used and applied to disease, such as Type- 2 diabetes, in the future,” Puleo added. “Non-pharmaceutical and device-based methods to augment or replace the current drug-treatments may add a new therapeutic choice for physicians and patients in the future.”

From the onset of these diabetes studies, this has been a truly collaborative team effort among all the partners to achieve the extraordinary progress made to date.  From the first GE studies showing initial results using ultrasound-prototype devices with diabetic models; the work then expanded through a DARPA-funded program. This was followed by additional work at partner sites investigating: The specific ion channels associated with the ultrasound effect within in vitro cultures (UCLA Samueli School of Engineering; Di Carlo Lab); the direct effects of ultrasound stimulation on nerve activity using recording electrodes (Albany Medical College; Shin Lab); testing the ultrasound treatment effect in a second and third models (Feinstein Institutes for Medical Research (FIMR); Chavan and S. Zanos Labs); and the magnitude of the effect on blood glucose using quantitative glucose clamp methods (Yale School of Medicine; Herzog Lab, and FIMR; S. Zanos Lab).

Sangeeta Chavan, PhD (professor in the Institute of Bioelectronic Medicine at the Feinstein Institutes and one of the senior authors on the paper) said, “There are no long-lasting clinical treatments in tackling diabetes. This exciting research is a major step forward to harness a novel approach of using ultrasound stimulation and bioelectronic medicine to alleviate and potentially reverse a disease that affects millions worldwide.”

Stavros Zanos, MD, PhD (associate professor in the Institute of Bioelectronic Medicine at the Feinstein Institutes and one of the senior authors on the paper) said “In addition to demonstrating a potential therapy for diabetes, this paper begins to mechanistically bridge short-term and long-term physiological and metabolic effects of neuromodulation, a missing link in how we understand, optimize and deploy clinically neuromodulation therapies.”

Raimund Herzog, MD, MHS, is an associate professor (endocrinology), in the Department of Internal Medicine at Yale School of Medicine and a member of the Yale Diabetes Research Center. "Even though we already have a large variety of antidiabetic medications to treat high glucose levels available to us, we are always looking for new ways to improve insulin sensitivity in diabetes. Unfortunately, there are currently only very few drugs that can do that. If our ongoing clinicals trials confirm the promise of the pre-clinical studies reported in this paper, and ultrasound can be used to lower both insulin and glucose levels, ultrasound neuromodulation would represent an exciting and entirely new addition to the current treatment options for our patients."

Dino Di Carlo, study co-author and bioengineering professor at the UCLA Samueli School of Engineering, said, “Our studies indicate that the focused ultrasound activates neurons through ion channels that are sensitive to mechanical forces.  This is a completely new avenue to interface with our body and treat disease.”

Damian S. Shin, Ph.D., interim chair and associate professor in the Department of Neuroscience and Experimental Therapeutics at Albany Medical College, said, “The findings from this collaborative effort are really exciting.  If substantiated, our work could lead to an innovative, non-invasive way to treat Type-2 diabetes. We’re proud to have helped lay the foundation for future clinical studies.”

Victoria Cotero (the lead author of the study from GE) noted that the findings reported in Nature Biomedical Engineering showed that GE’s non-invasive stimulation technique using ultrasound was  effective in both genetic and diet-induced models of Type- 2 diabetes.  In both cases, the treatment was able to improve both glucose tolerance and insulin resistance.

Jeffrey Ashe (the senior electrical engineer on the project) said, “One of the factors the GE Research-led team is still determining is the frequency of treatments that is needed to maintain the reversal of diabetes under different stimulation parameters.” In these studies, the team found that regular short treatments (i.e., 3 minutes every day) resulted in long-term maintenance of normal blood glucose levels.

Following the reported preclinical studies, GE Research and its collaborators have been engaged in additional preclinical and initial clinical studies that investigate the effects of alternate dosing (i.e., type of ultrasound pulse and duration of treatment) . The team will report on those studies later this year.

*The diabetes studies referenced in this material were partially based upon work supported by DARPA under Contract No. HR0011-18-C-0040.  Any opinions, findings and conclusions or recommendations expressed in this material are those of the author(s) and do not necessarily reflect the views of DARPA.

GE Research is GE’s innovation powerhouse where research meets reality. We are a world-class team of scientific, engineering and marketing minds working at the intersection of physics and markets, physical and digital technologies, and across a broad set of industries to deliver world-changing innovations and capabilities for our customers.   To learn more, visit our website at  www.ge.com/research/.

“The use of ultrasound could be a game-changer in how bioelectronic medicines are used and applied to disease, such as Type- 2 diabetes, in the future. Non-pharmaceutical and device-based methods to augment or replace the current drug-treatments may add a new therapeutic choice for physicians and patients in the future.” -- Christopher Puleo, a senior biomedical engineer at GE Research who co-led the diabetes studies and a corresponding author of the Nature Biomedical Engineering article
Share to social
Media Contacts
MEDIA RELATIONS