Not one, but two! Mexico's first HA power plants

The energy demand in Mexico has grown by 25% since 2000 and isn’t likely to slow any time soon. The country’s electricity demand is booming at three times the rate of the OECD average, and electricity consumption is expected to grow by 50% in the next 25 years. Enter the HA combined-cycle power plant—GE has received not just one order, but two in the first half of 2017 for these highly advanced and efficient plants. Together, these two projects will generate the equivalent power needed to supply up to 5.3 million average Mexican homes.

“For Iberdrola, being GE’s first client with this technology in Mexico represents an important step that strengthens the relationship between both companies,” said Enrique Alba, Iberdrola Mexico’s General Director. “We have been working together for many years, and we’ve always received the most reliable technology from them. GE’s technology will be crucial for our expansions in Mexico, where we plan to double our size by 2020.”

Outfitted with GE’s Digital Power Plant capabilities using advanced controls and control systems powered by Predix*- the platform for the Industrial Internet - plants can use real-time data to deliver better outcomes with stable and efficient operations.

The power plant will feature two GE 7HA.02 gas turbines, one steam turbine, three generators, two HRSGs and the latest plant control systems. The plant is expected to generate 875 MW of electricity with the highest levels of efficiency in the industry, helping to improve the stability of the Jalisco state grid. Jalisco is the fourth-largest energy consumer nationwide, and despite its national importance only 11% of the energy Jalisco consumes is produced locally. Tierra Mojada will not only help power Jalisco but also the entire “bajío” region which is a key area of the country due to its industrial growth.

“Tierra Mojada will provide energy in the most competitive manner, allowing for more reliable power to the residents and businesses in the region - thanks to GE’s state-of-the-art 7HA.02 technology, services and digital solutions,” said Pedro Barriuso, Fisterra CEO.

GE will also provide services to maintain the gas turbine, steam turbine and generators under a multi-year service agreement that will support optimum performance, efficiency and reliability of the equipment. The project scope also includes GE’s Predix-based Asset Performance Management (APM) software that predicts and accurately diagnoses issues, optimizing the units’ operation and resources, this will help Tierra Mojada operate at the highest levels of reliability and availability to support power purchase agreements.

Global orders mean local impact
Not only will these plants bring efficient power that’s needed to the people of Mexico, but they will also create jobs in the US, with the majority of the equipment being manufactured in our facilities in Maine, New York, and South Carolina as well as technology from other locations. Check out the details here: 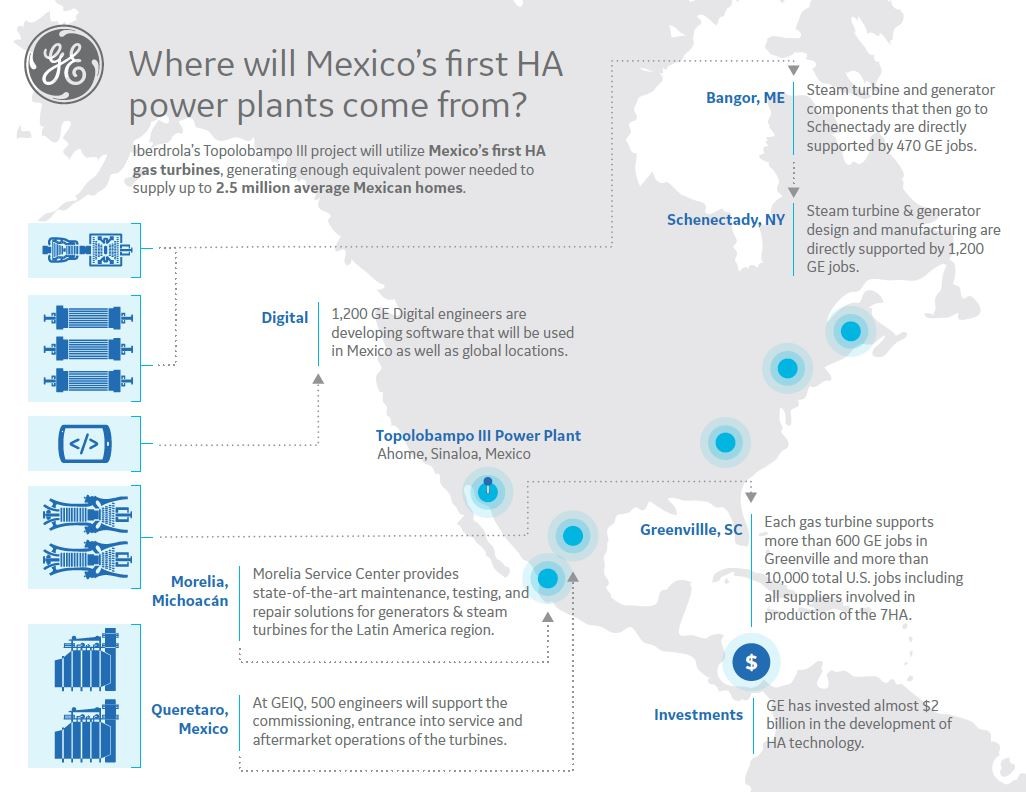 Learn more about the 7HA

The Digital Power Plant Is Here!