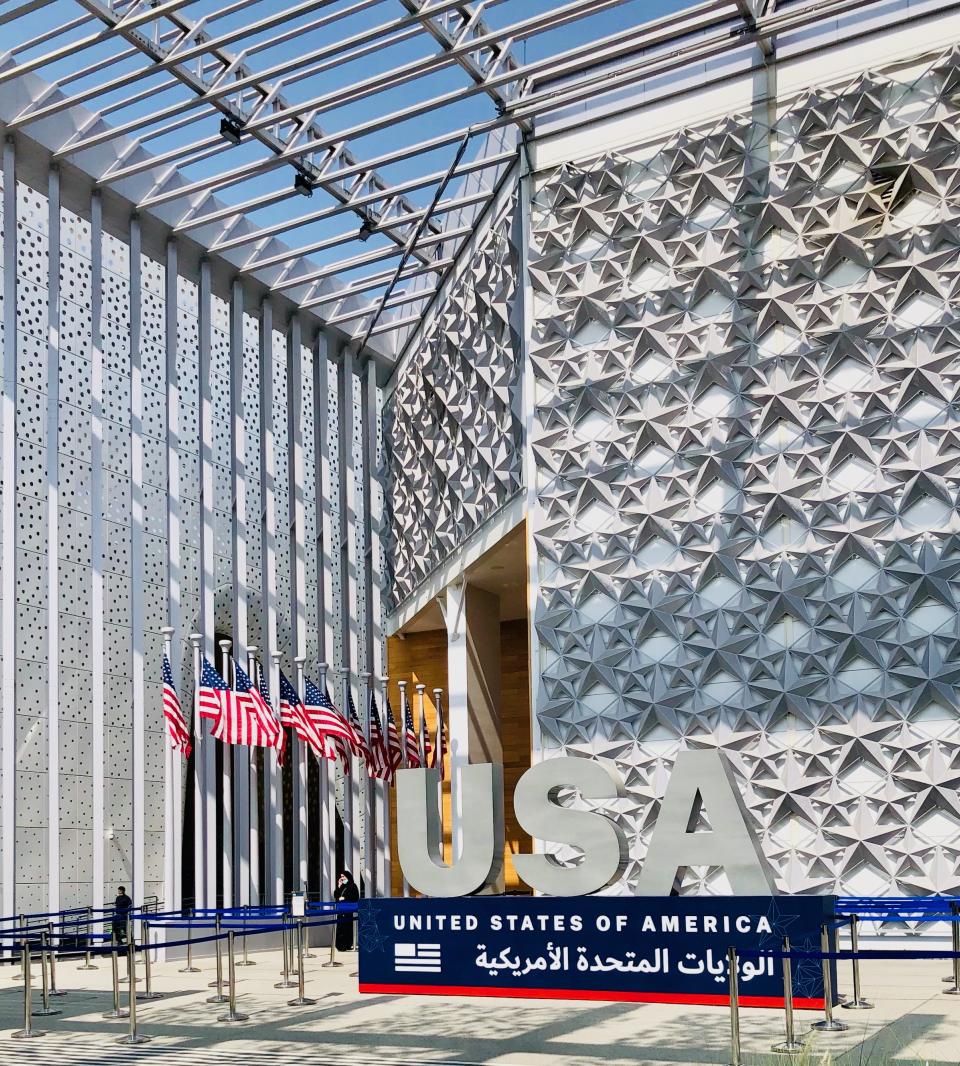 As chief operating officer of Etihad Airways, Mohammad Al Bulooki is paying close attention to what his customers are saying. That includes his 10-year-old son. “I asked him, ‘What’s the biggest problem in the world?’” Al Bulooki said. “He said, ‘The environment.’ That was his answer. If you asked me when I was his age, I would tell you Ninja Turtles.” Al Bulooki wasn’t trying to be funny. He was making a point. Sustainability and protecting the environment isn’t just good for the planet. It’s a smart way of doing business. “We believe that commercial customers are way more aware now than they ever were before” of what companies are doing to reduce their carbon footprint, he said.

Ahmed Safa, chief engineer at Emirates, one of the world’s largest airlines, agreed with the sentiment. “There’s a lot of appetite to travel, but don’t forget, a lot of the travelers are young and want to travel responsibly,” Safa said. “And we owe it to them to give them that option. Sustainability will be one of those options that we can bring to the arena so the traveling public can make responsible choices.”

Al Bulooki and Safa made their comments in November at the U.S. pavilion on the grounds of Expo 2020 Dubai. They were both speakers at the Spotlight Tomorrow summit, organized by GE and focusing on the future of energy, aviation and healthcare. 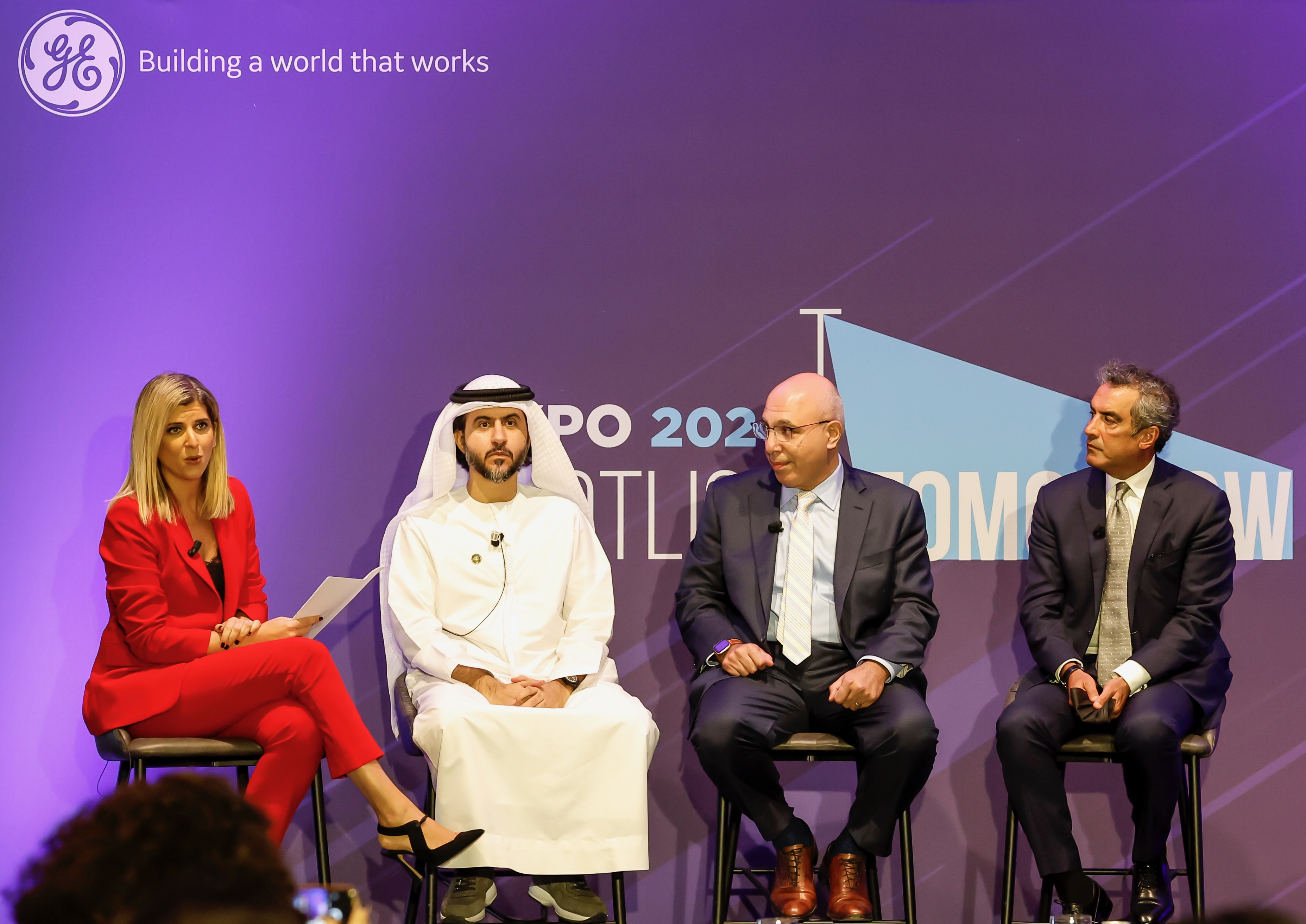 The Expo brought together 192 countries around the theme of “connecting minds and creating the future” through sustainability, mobility and opportunity. The show has been a huge draw — it attracted more than a million visitors in the first few weeks after it opened on October 1 and the organizers expect 9 million people to show up before the Expo’s end, next March.

But it’s not just countries who are at the Expo to display their contributions to sustainability and their vision of the future. Companies and businesses are present as well. Besides Etihad and Emirates, the GE event included speakers from the UAE’s Medcare Hospitals and Medical Centers, Emirates Global Aluminum and PricewaterhouseCoopers and a host of senior GE executives.

Roger Martella, GE’s chief sustainability officer, arrived in Dubai directly from the 2021 UN Climate Change Conference (COP26) in Glasgow, Scotland. He said that while COP26 was focused on what can we do in terms of setting targets and taking actions to address climate change, the Dubai Expo is focused on how innovation and technology must be part of the solution. Martella added that countries should focus on lifting quality of life for people while at the same time solving some of the world’s biggest challenges.

The Future of Energy

At the GE summit, Martella was speaking on an energy panel that included Joseph Anis, GE Gas Power’s president and CEO for Europe, Middle East and Africa, and Ivano Iannelli, senior adviser for sustainability at Emirates Global Aluminum (EGA), the world’s largest “premium aluminum” producer and the largest industrial company in the UAE. Iannelli said companies like EGA are producers of CO2 emissions, but he also pointed out that its product — aluminum — is infinitely recyclable. “When we look at aluminum, in the future the possibilities are endless; already today we produce aluminum by harvesting the power of the desert sun and hope to achieve new benchmarks in the future to meet global expectations.”

The panel discussed the benefits of partnerships between companies pursuing their decarbonization goals — like GE and EGA — and the role of governments, with their own long-term decarbonization visions, and NGOs. “GE shares those goals of innovation and technology, we share the sense of optimism,” Martella said. Having seen COP26 and the Expo back-to-back, “it gives me a lot of confidence that we’re going to be able to bring solutions, innovation and technology to these issues.” 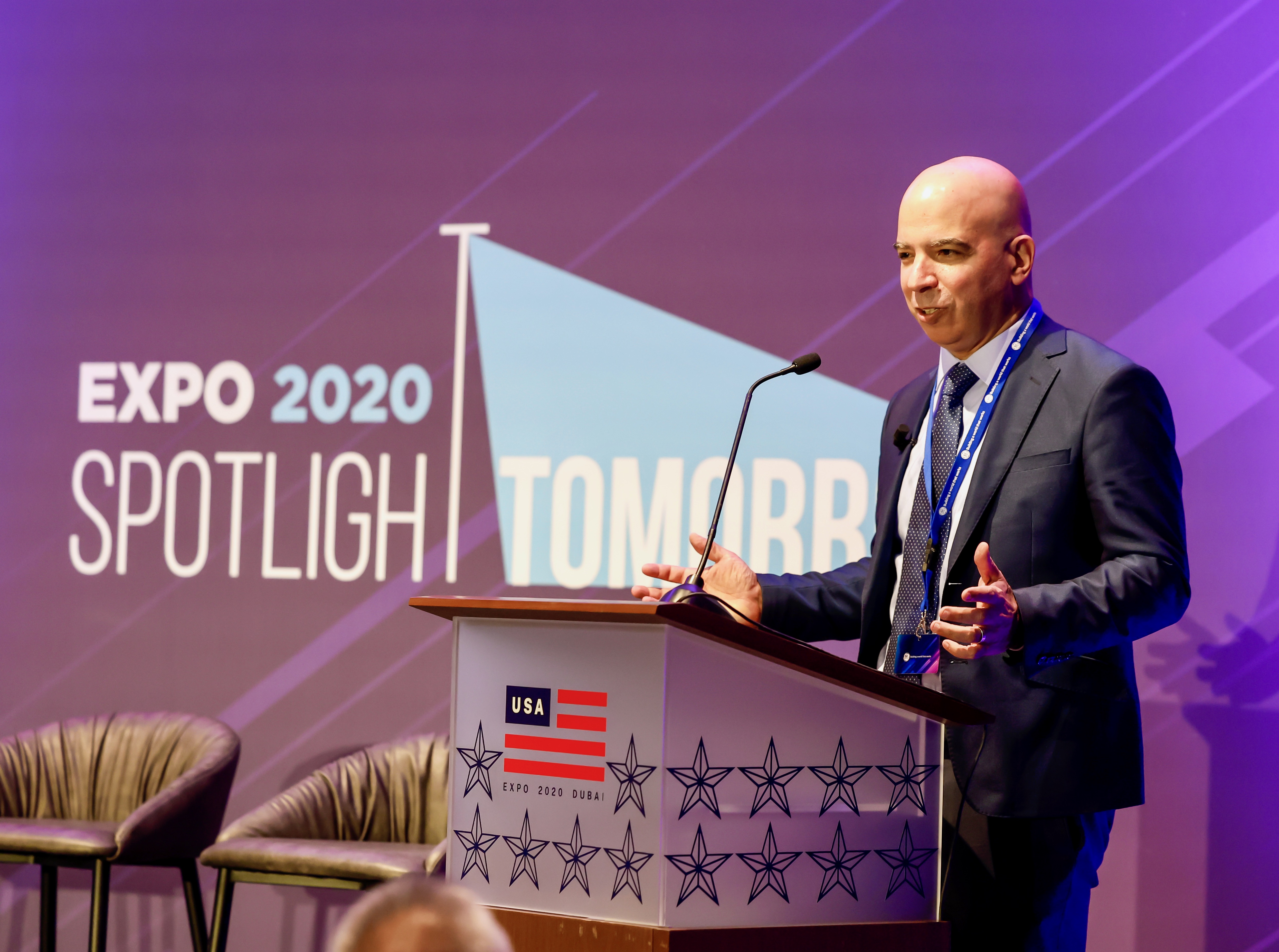 Anis addressed the role of gas power, a source of baseload electricity that is much less carbon-intensive than coal, and grid stability as more renewables come online. “You will need to have flexible power available to balance” the variability of renewable sources like wind and solar, he said. “I was just traveling, meeting with customers, meeting with government utilities, and that’s really what’s top of mind for them as they’re adding more renewables into their grids.”

Anis also talked about the use of hydrogen as fuel in GE gas turbines to help decarbonize the energy industry further. “There are over a hundred GE-built gas turbines with more than 8 million operating hours that have operated on varying percentages of hydrogen blends,” he said. “So the ability to burn hydrogen with no carbon emissions is obviously a great incentive. It’s something that we have the capability to do.”

While hydrogen combustion does not produce carbon emissions, the making of hydrogen usually does at present. More than 95% of the hydrogen produced for industry comes from hydrocarbons, through steam methane reforming (“SMR”). Most of the carbon dioxide produced is not sequestered, resulting in “gray” hydrogen. To keep the carbon footprint low, the industry is now looking at low-carbon hydrogen such as so-called green hydrogen, made with renewable energy, and gray-turned-“blue” hydrogen, made with carbon capture solutions. GE, for example, has been participating in a green hydrogen project in New York State. GE gas turbines can burn any color of hydrogen, and GE has a pathway to burn up to 100% hydrogen in most of its gas turbines by the end of this decade. It is worth noting that the company’s most advanced HA (high-efficiency, air-cooled) gas turbine technology is currently capable of burning up to 50% of hydrogen by volume, which is the highest in its class globally. There are also already GE B- and E-class gas turbines that can burn 100% hydrogen by volume.

The Future of Flight

The energy panel was followed by an aviation session that included Al Bulooki, Safa and Mohamed Ali, GE Aviation’s vice president of engineering. Al Bulooki highlighted Etihad’s pledge to cut its carbon footprint by 50% by 2035 and pointed to the Greenliner program the airline launched in 2019. The program is an industry partnership between more than 50 organizations, including key players like GE and Boeing. In fact, the program is using the airline’s Boeing 787 fleet as a test bed for sustainability improvements, and many of these planes are powered by GE Aviation’s GEnx engines. “We will partner with anyone,” Al Bulooki said.

The Greenliner program is experimenting with novel approaches to flying outside of areas where planes form contrails, which are thought to trap heat. More traditional solutions focus on sustainable aviation fuel (SAF), aircraft weight reduction, flight planning software and other approaches.

The program has already started delivering results. In October, an Etihad Airways jet flew from London to Abu Dhabi on a fuel blend containing SAF and took advantages of the steps mentioned above. The plane’s carbon emissions were 72% below those of an equivalent flight in 2019.

Safa’s Emirates is pursuing a similar path. He said that lighter aircraft interiors, analytics-based maintenance, GE’s 360 Foam Wash engine-cleaning technology, which improves engine efficiency, and digital tools enabling optimal flight planning, airline operations and even individual pilot performance can make a difference. “There’s a lot of things that we do with the current technology, because this is going to be with us for the next 15 years,” Safa said. 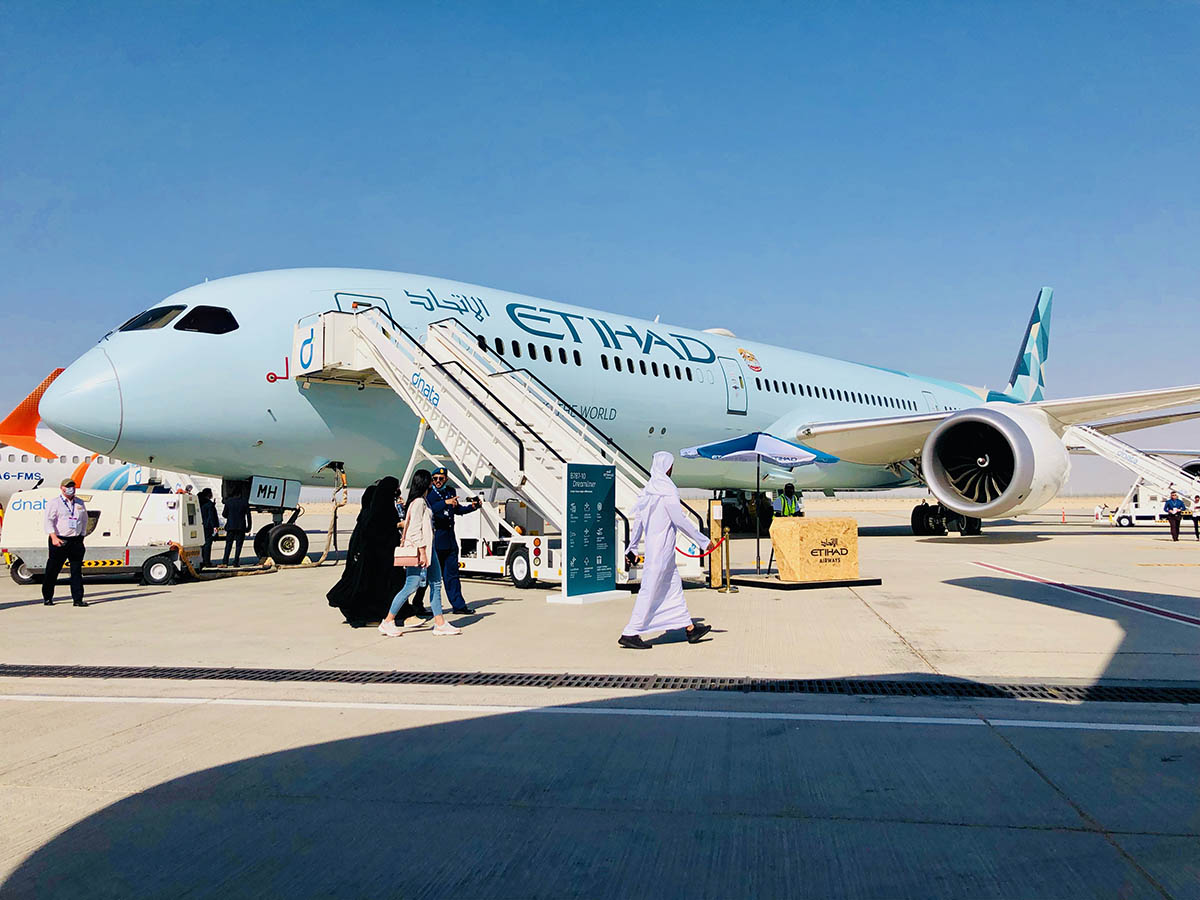 GE’s Ali, who was at the Expo summit and also attended the 2021 Dubai Airshow in November, said that “every discussion I’m having here is about sustainability.” One frequent topic was SAF. “We have been working on certifying more and more sustainable aviation fuel so that we enable our customers to use it,” Ali said. “And quite honestly [we are] collaborating with everybody — governments, government agencies, airlines, energy companies — in how to create more pathways to enable more sustainable aviation fuel.”

Ali also discussed GE technologies like 360 Foam Wash, whose development he led. “It makes the engine more efficient and consume less fuel,” he said. And he pointed to software to make flight more efficient. “Digital technologies, they play a huge role,” he said. “We have been collaborating with our customers here in the region and worldwide on using and deploying these digital technologies to enable a more sustainable future.”

Speaking of the future, Ali mentioned GE’s work on new technologies, including research into hybrid electric and electric flight. In June, CFM International, a 50-50 joint company between GE and Safran Aircraft Engines, announced the RISE program, aimed at developing new technologies to reduce engine fuel burn by 20%. “We are working with our customers worldwide on maturing these technologies so that they are ready for the next generation of aircrafts and engines,” Ali said. GE Aviation is also partnering with NASA on finding new paths to electrifying aviation.

Ali said that GE was committed to developing solutions that will enable safe and affordable flight that reduces CO2 emissions “so that everybody can enjoy the joy of flying.” He said that aviation “connects the world, makes the world peaceful,” and that the industry should do it in a way that leaves “the planet to our children and grandchildren equal or better.”

The Future of Healthcare

The final panel focused on healthcare. Andre Daoud, CEO of the UAE’s Medcare Hospitals and Medical Centers, said that a key aspect of sustainability in healthcare meant expanding the capacity of healthcare systems and patient access to care through home treatment, for example. “The way things are moving today is how do we go to the patient, rather than bring the patient in,” he said.

Mohie Elrafey, head of strategic marketing at GE Healthcare EMEA, said that healthcare systems must be both sustainable and resilient. “There are lots of variables that come into play,” he said. “I think one of the most important variables is ensuring that whatever we do in healthcare is centered around a person-centric approach. And that’s really putting the patients and the caregivers at the heart of the system.”

Elrafey said one obstacle hindering access to care today is a global shortage of doctors, nurses and technicians. “We need to be mindful of wellness and mental health and look at ways to design healthcare systems that make a lot of redundant administrative work go away, automate workflows, simplify and expedite diagnosis, so that healthcare workers can really do what they’re meant to do, which is to actually focus on patient care.” 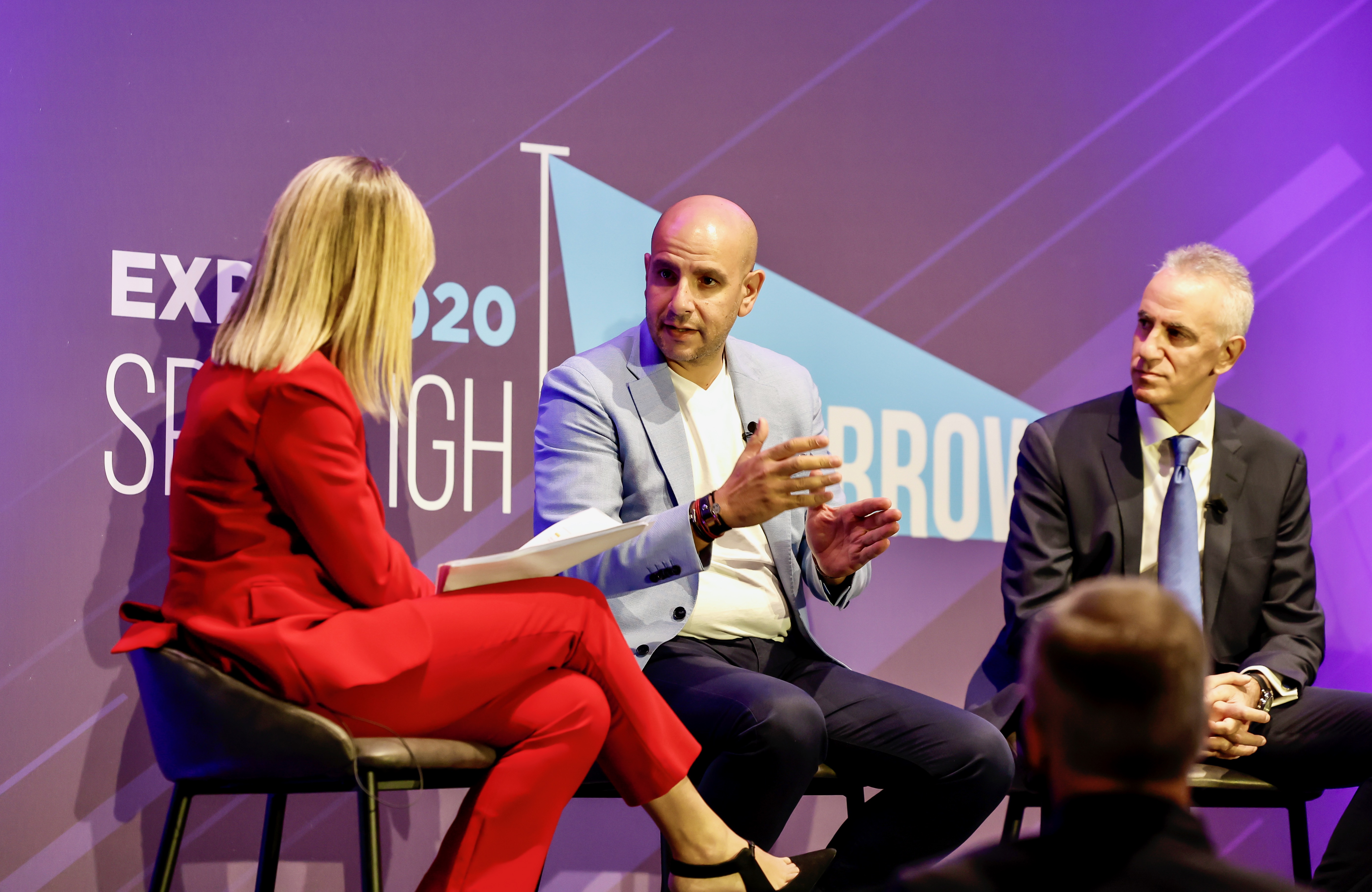 He also mentioned that healthcare systems need to be “intelligently” efficient, leveraging software platforms like GE Healthcare’s Edison platform, which is vendor-agnostic and sits on top of and pulls information from multiple siloed data sets from across the hospital enterprise — ingesting, aggregating and structuring this data and then applying AI and intelligence to this information and sending back to caregivers actionable insights that are easy to interpret and use in a timely manner. This will help to drive precision and efficiency in healthcare, be it clinical, operational or financial.

Nabil Habayeb, senior vice president of GE and president and CEO for GE International Markets, said the Spotlight Tomorrow summit was about “addressing a key priority for GE, which is sustainability.”

Said Habayeb: “We’ve got key customers and key stakeholders who are focusing on sustainability, and this is why we’re here.”