The Art Of The Possible: UAE’s Etihad Airways Cut CO2 Emissions By 72% On A Recent Long-Haul Flight

A routine commercial long-haul flight scored an important aviation industry milestone last week when a Boeing 787 operated by Etihad Airways flew from London to Abu Dhabi on a fuel blend containing sustainable jet fuel. The plane’s carbon emissions were 72% below those of an equivalent flight in 2019.

The flight, which took place on Oct. 23, was the most sustainable flight in the airline’s history. It was part of the Etihad Greenliner Program, an industry partnership launched by Etihad that includes GE, Boeing and other companies. The program is using the airline’s Boeing 787 fleet as a test bed for sustainability improvements. All of Etihad’s Boeing 787s are powered by GE Aviation’s GEnx engines.

“These are noteworthy savings,” said Mohammad Al Bulooki, chief operating officer of Etihad Aviation Group. “When Etihad committed to achieve net zero, it was acknowledged that it was only possible if the airline worked collaboratively and positively with our industry partners. That is exactly what Etihad has done with the sustainable flight.”

The London-to-Abu Dhabi flight employed a number of improvements during flight planning, while the plane was in the air and after landing. “This included preparing the aircraft, engines and route planning systems to optimize take-off, en route and landing flight paths and trajectories, minimizing contrail formation, working with our guests to reduce their luggage and rewarding those that travelled light,” Etihad said in a news release. Even the catering was “appropriately sourced” and served on sustainable dishware and with lightweight cutlery. 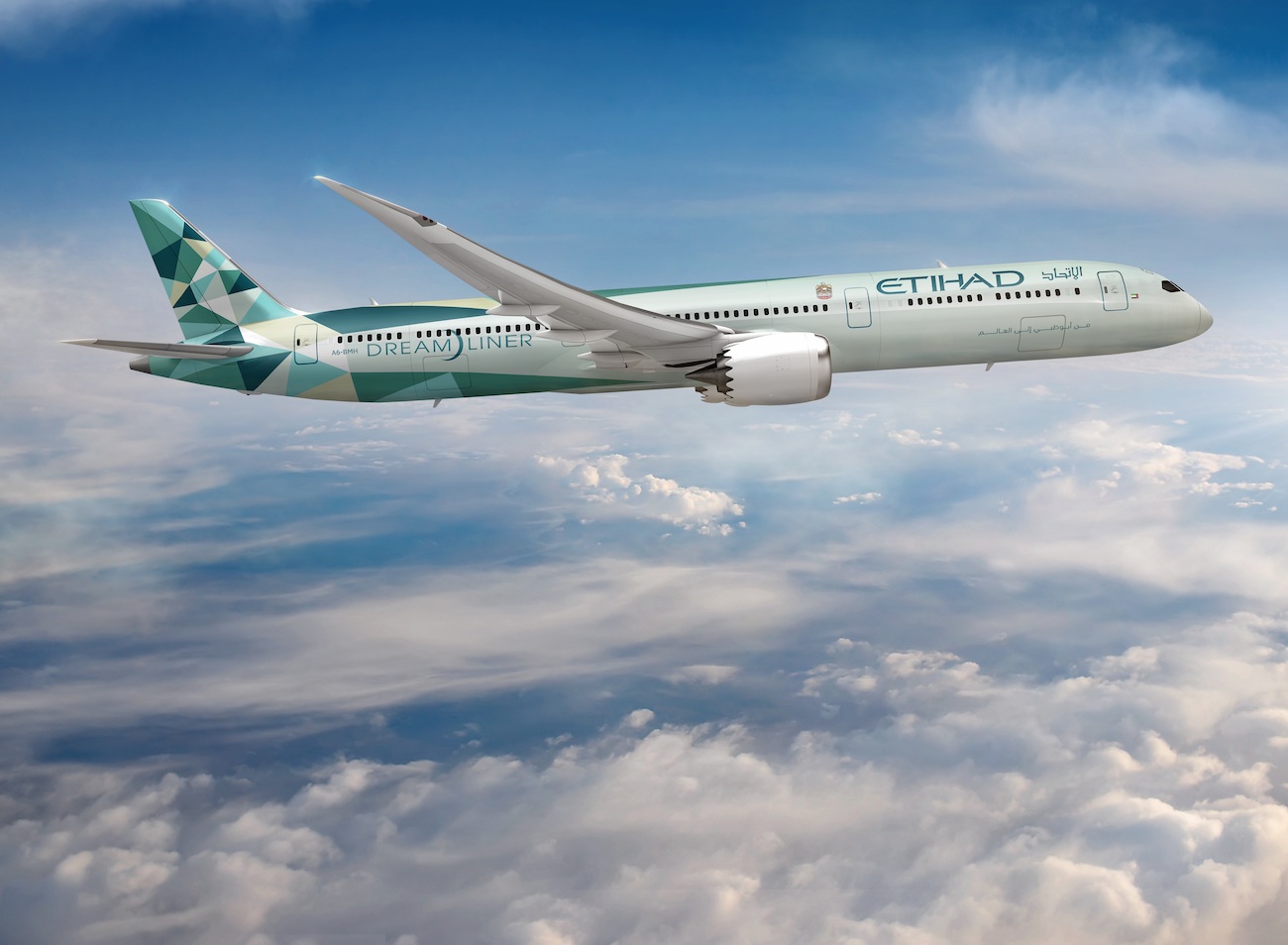 According to Etihad, the six-hour flight was the first commercial flight to mitigate contrails, which can cause cirrus clouds to trap outgoing infrared radiation. Working with the British company SATAVIA, “the team identified potential areas of ice super-saturated regions in the atmosphere where harmful contrails are likely to form, and the flight route was adjusted to avoid these areas,” the airline reported. “Based on the original and adjusted flight plan, the strategy avoided the production of approximately 64 tons of CO2 [emissions], with a fuel penalty of only 100kg, or 0.48 tons CO2.”

“This is only possible when we all work together, and we all commit to making whatever savings we can,” said Tony Douglas, group chief executive officer of Etihad Aviation Group. “Each of these partners played their own, significant role in the step we took today.”

The Boeing 787 flying on Oct. 23 also used GE Digital’s Fuel Insight software. The software can help airlines reduce costs and emissions by analyzing flight data, examining trends and identifying fuel savings in just minutes. It can be used on a single flight or scaled to the airline-wide level.

The plane’s two GEnx engines ran on a fuel mix containing sustainable aviation fuel. SAF, or biofuel, is jet fuel made with fats, oils and greases that have been derived from crops, grasses, algae and other sources. “And now we are talking about waste streams, municipal or wet wastes, we are talking about sugars and alcohols,” says Gurhan Andac, GE Aviation’s engineering leader for aviation fuels and additives. “At the end of the day, all of them might play some role, no matter how small they may be, depending on the location, depending on the resources a particular region has.”

Though less than 1% of the fuel currently used in commercial aviation is SAF, GE Aviation is among the companies researching ways to expand its use, which down the road could mean CO2 savings of up to 80%, factoring in the entire life cycle of the fuel.

“SAFs are a credible alternative to current fossil fuels, however they are currently very expensive and difficult to source and load onto the aircraft,” said Etihad’s Al Bulooki. That’s why, he says, “industry and governments must work together to address these issues through the funding of the research and development of SAFs.”

Beyond SAF, GE Aviation and Etihad have partnered on development of GE’s 360 Foam Wash, an advanced cleaning system that can help improve engine performance and reduce fuel consumption by removing dust and dirt particles from inside the engine. Etihad has a technical license to use 360 Foam Wash on its GE90 and GEnx-1B engines, allowing the airline to clean its fleet of Boeing 777s and 787s completely in-house, and the airline used Foam Wash before takeoff in London.

“Not only does GE have a robust technology pipeline to significantly reduce emissions in future aircraft engines, we’re committed to partnering with our customers to reduce emissions today with the fleet in service," said Dave Kircher, general manager of the GEnx engine program for GE Aviation. "More fuel-efficient GEnx engines, coupled with digital tools for fuel savings, new engine-cleaning technologies such as 360 Foam Wash and the ability of all our jet engines to run on approved sustainable aviation fuel can help our airline customers and partners like Etihad Airways reduce their environmental impact.”

To shave still more emissions, the jet was serviced after landing by Etihad’s new fleet of electric vehicles for ground logistics such as baggage unloading.

“Our single greatest learning from the past two years has been that even when solutions are available, they are not easily deployed on a regular basis due to constraints throughout the entire aviation ecosystem,” said Etihad’s Al Bulooki. “What was demonstrated on [the flight] was the art of the possible; the next step is to work on how these can be deployed sustainably.”