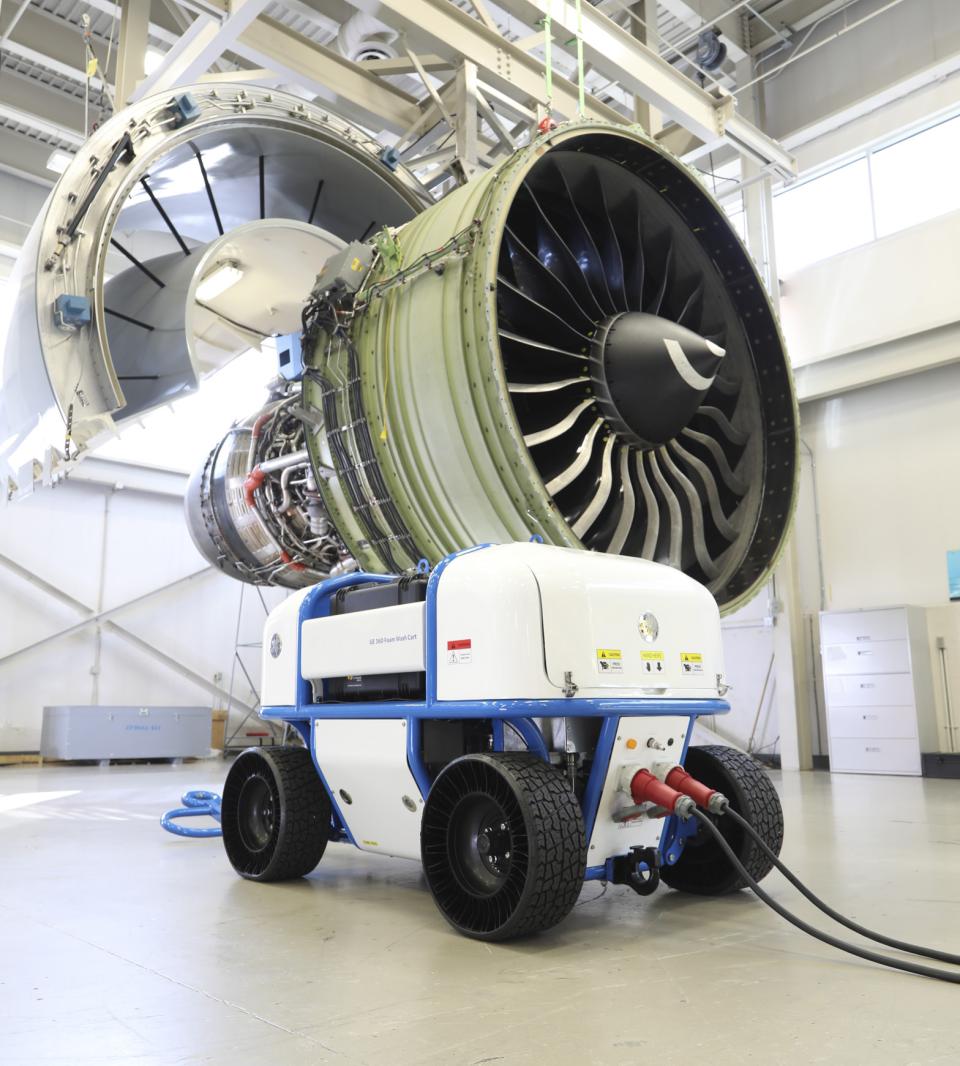 If there’s one thing airlines chase more than anything else when it comes to engines, it’s “time on wing.” The longer you can keep a jet engine in good working order without having to remove it for maintenance, the more flights you can complete and customers you can serve.

In the Middle East in particular, airlines fight a constant battle to increase time on wing. Sand can adhere to the turbine blades inside an engine and work its way into the compressor, wreaking havoc on fuel efficiency, a metric closely linked to carbon emissions. Now, after a lot of study and testing, GE engineers who designed and built those engines think they’ve hit upon a novel way to reverse the effects of the sands of time. Called GE’s 360 Foam Wash, the powerful approach thoroughly cleans a commercial jet engine, helping to improve its performance and potentially eliminate tons of climate-damaging CO2.

“The world has only done water washing for the last 30 years,” says Mike Eriksen, senior technology program leader at GE Aviation. “Literally, spraying water in the front while the engine’s motoring and rinsing it out. And that wasn’t adequate for this problem. So we reinvented how to clean an engine.”

360 Foam Wash is now approved for use on engines including the GE90, GEnx, CF34 and CF6, as well as the Engine Alliance’s GP7200 engines, which serve on large Airbus A380 double-decker jets. At the Dubai Airshow his week, GE Aviation announced the 360 Foam Wash program has reached 1,000 washes of engines in the field since 2017.

So far, seven airlines and one MRO (maintenance, repair and overhaul) operator have license agreements. Etihad Airways alone anticipates a reduction of more than 7,000 metric tons of CO2 through the end of 2021 for its combined GE90 and GEnx fleets as a result of switching from water to 360 Foam Wash.

In fact, just in time for COP26, Etihad’s long-haul Boeing 787 flight from London to Abu Dhabi scored a 72% reduction in carbon emissions using existing technologies, including 360 Foam Wash. The flight used sustainable aviation fuel, employed innovative route planning to avoid creating contrails and even served passengers on eco-friendly dishes. Besides the new cleaning method, the plane used GE Aviation’s GEnx engines and utilized GE Digital’s Fuel Insight software to analyze data and make fuel-saving adjustments within minutes. The plane will be on display this week at the 2021 Dubai Air Show, which started on Sunday. 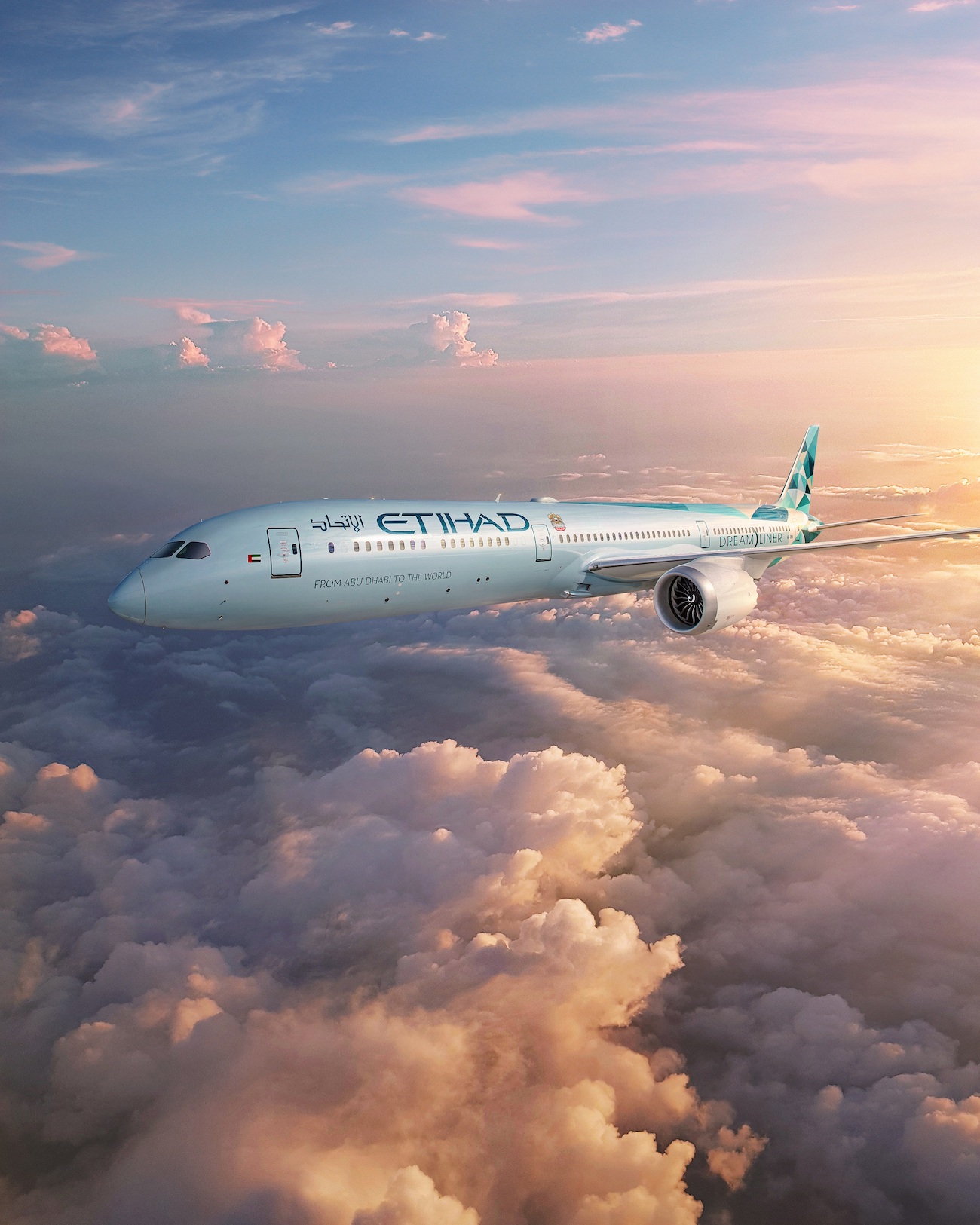 The hunt for a cleaning solution started around 2012, when GE started noticing what it called the “hot and harsh” effects of sand on the wide-body jets flown by some of its engine customers, Eriksen recalls. Emirates airline — and, later, Etihad Airways and Qatar Airways — came to GE with the same problem: Very fine particulate dust was getting “baked on” to the cores of the GE90 and GEnx engines, causing a loss in fuel efficiency. Traditional water-wash techniques were showing diminishing returns — they couldn’t keep engines clean enough between regularly scheduled maintenance sessions. The relentless desert heat and sand were exacting a toll.

After studying the problem at GE’s Middle East Technology Center in Dubai, GE Aviation took the data to GE’s Research Center (GRC) in Niskayuna, New York, where Eriksen says they posed two key questions: “How would you characterize the dust that we’re seeing? And how would you remove it?”

A geologist at GRC subjected the samples to a battery of tests and found it to be “a very hard, metamorphically phase-reacted layer of dust,” Eriksen says. “It’s the kind of thing where you scratch it and it’s like cement.” GE engines are otherwise very efficient at ingesting and separating coarse gravel, rocks and sand that occasionally find their way into the inlet. “But the really fine dust, we found, still went through the entire core,” he says. “That’s what was building up.”

That’s when the real brainstorming began. Over the next couple of years, the technicians at GRC developed what Eriksen describes as a “really novel detergent” that is extremely effective at breaking down the binders in that hardened layer of dust. But once they had the detergent, he says, the team had another challenge: how to carefully inject it into an engine.

This is where the foam came in. As Eriksen says, “foam is just a volume-filling method. All we wanted to do was figure out, ‘How can you get this detergent throughout the whole engine?’ We can’t just squirt it in there. And it works by a chemical reaction, so you have to keep contact fresh with all the surfaces where the dust is.”

They built three generations of prototypes for the foaming system and a mock-up of an engine in the lab so that they could figure out how to safely and effectively distribute the detergent throughout its core. Once they had the foaming system fine-tuned, they took it to some of GE Aviation’s overhaul shops and tried it on various engines that were being repaired. After using the foam wash, they’d run the engine in a test cell to measure its recovery — basically, how hot it gets when it’s running. “If the exhaust gas temperature (EGT) is within a certain range, you know that the engine is running efficiently,” Eriksen says. “And so if you have dust buildup, if the engine has to work harder to produce the same amount of thrust, that’s what makes the EGT go up.”

While a normal water wash typically produces a fall in EGT as the engine becomes more efficient, the foam washes were resulting in “significant” drops, he says. “We started seeing the EGT recovery and the fuel flow recovery go off the charts.”

By 2017 they were ready to take it into the field. Etihad began testing 360 Foam Wash on-wing on a GE90 engine powering a Boeing 777 that January; Qatar followed in April, testing it on a GEnx-1B engine designed for Boeing 787 jets. Over the next four years, working with their partners at Etihad, Qatar and Emirates, GE Aviation industrialized its foam wash system, designing a special self-contained cart with hoses to pump the detergent into an engine and a separate apron to catch the solution as it flows out. The cart allows 360 Foam Wash to be employed in a variety of on- and off-wing scenarios, whether inside a maintenance hangar or outdoors on a tarmac.

Emirates, Etihad Airways, Qatar Airways and Royal Jordanian Airlines now hold technical licenses to use 360 Foam Wash for their GEnx and GE90 engines. According to Rohan Douglas, Etihad’s senior manager of engine management, the airline has begun to track fuel savings on its GEnx-1B- and GE90-powered planes. “We’re seeing the improvements,” he says.

Yasser Elkilani, services leader for on-wing technology at GE Aviation, oversees the rollout of foam wash to GE’s customers. He notes that “during technology trials with its GE90 and GEnx engines, the 360 Foam Wash solution allowed customers in the Middle East to improve engine performance by reducing buildup of deposits in the engine, lowering engine exhaust temperatures and improving engine compressor efficiency. These improvements led to reduced fuel consumption and CO2 emissions, as well as increased engine time on-wing.”

GE continues to work in a variety of ways to help its airline customers incorporate more emissions-lowering methods into their businesses. “We believe we can win together,” Douglas says. “We tell the guys [at GE], ‘If you have anything that’s new and fresh, interesting or groundbreaking, we’re ready.’”