Reporting GE’s year-end and fourth-quarter results for 2020 today, GE Chairman and CEO Larry Culp said the company delivered “significantly improved” profitability and cash performance in a difficult year. “We are in leading positions to capture opportunities in the energy transition, precision health, and the future of flight,” Culp said. “As we continue our transformation, we remain focused on strengthening GE and delivering value for the long term.”

Those opportunities and that strength can grow because of GE’s perennial focus on innovation, and last year was a good example. GE developed and introduced technologies that help address some of the world’s biggest challenges such as energy transition to more renewables, climate change and, of course, the pandemic. It did so with top notch engineering and also by artificial intelligence, data analytics, and other digital technologies. Here are a few examples. 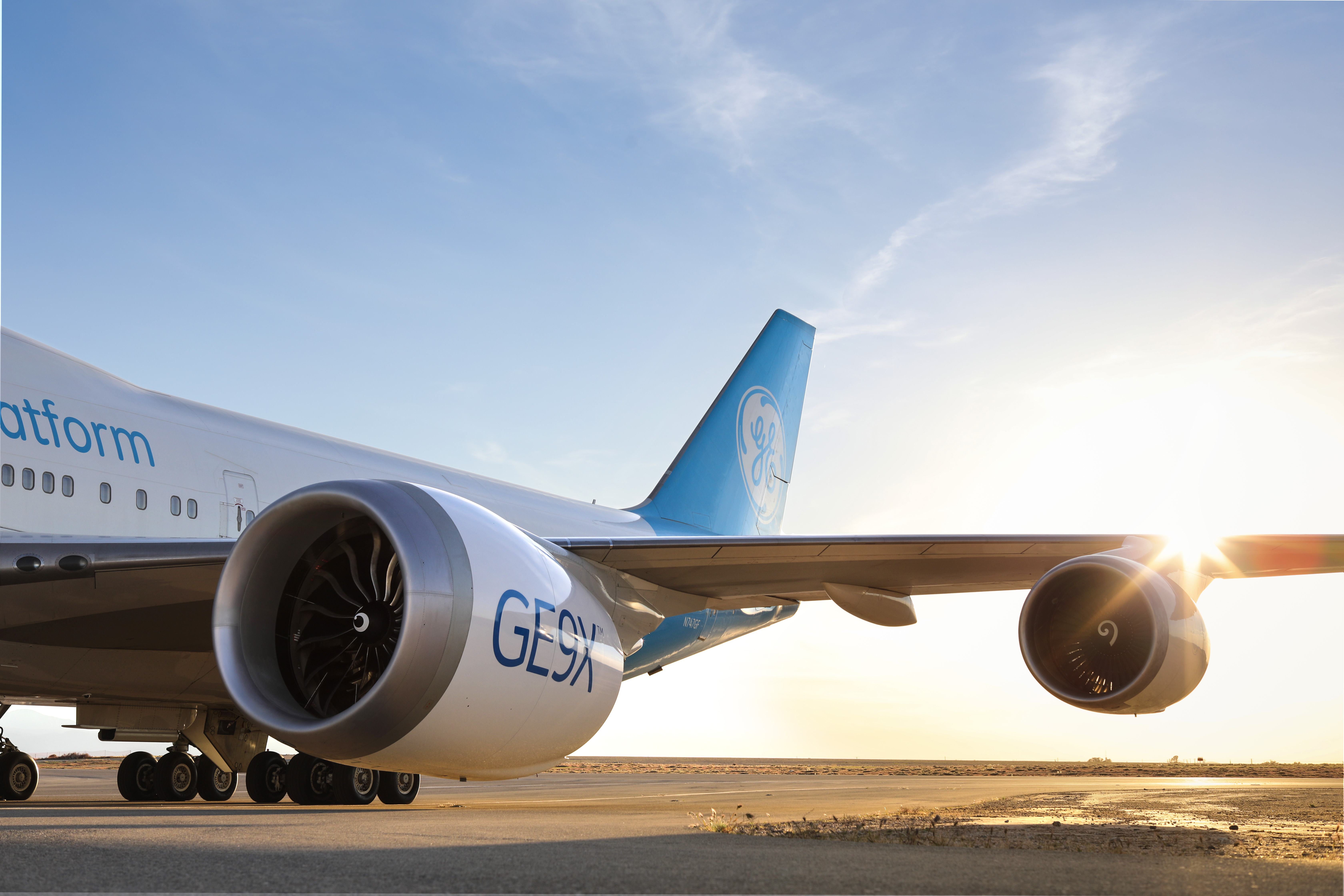 A couple decades ago, engineers from GE Aviation canvassed customers to learn what they wanted in an ideal jet engine. They turned up a list of about 300 items, with one wish firmly at the top: fuel efficiency. That’s no wonder, given that fuel accounts for close to a fifth of an airline’s operating costs. Those engineers got to work — and came up with the GE9X engine. Together, the engine and the plane it was designed for, the Boeing 777X, are expected to be 20% more efficient than their predecessors. But efficiency isn’t the only thing this machine has going for it, though. It’s also the most powerful jet engine in existence.

Last fall, the Federal Aviation Administration certified the GE9X, meaning that GE could start manufacturing engines for commercial service. The milestone came after a testing process that was long and grueling, at least from the engine’s standpoint. The engine is tough but it’s also cutting-edge: The GE9X achieves its efficiency gains partly through the use of lightweight but heat-resistant ceramic matrix composites, as well as 3D-printed parts. And the engine is smart, incorporating big data and analytics to help airlines save time and money. GE Aviation senior engineering executive Karl Sheldon summed it up: “We’ve developed an aircraft-engine combination that I honestly think is going to be unbeatable in the marketplace.” 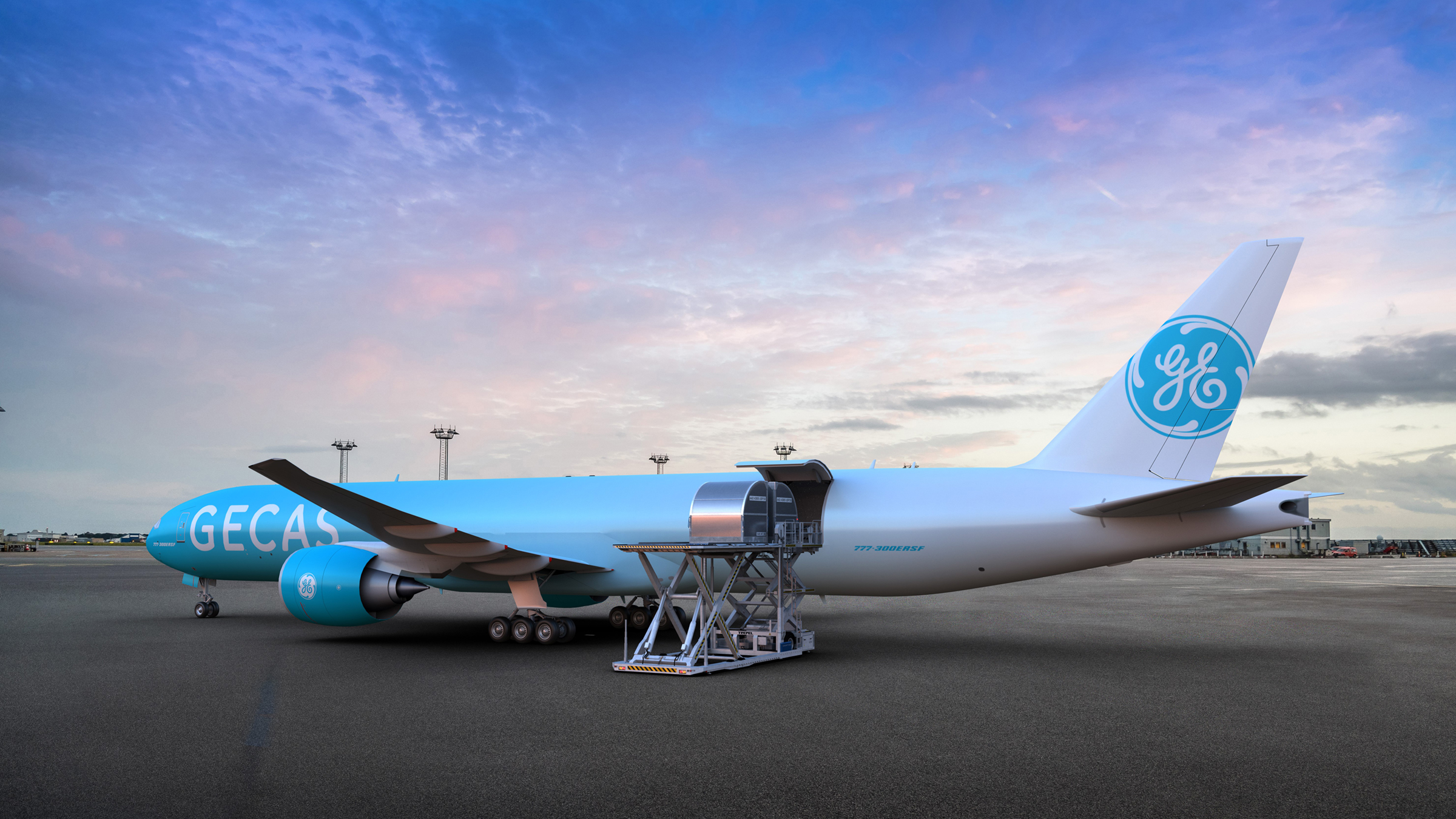 The Boeing 777 is considered a workhorse of long-haul passenger aviation, ferrying travelers nonstop between continents powered by two giant GE90 jet engines under its wings. But today, these stalwarts of the skies are finding another purpose — as cargo jets. With cargo traffic expected to grow in coming years, GE Capital Aviation Services is seeking to meet that projected need by converting passenger planes to freighters. In 2019 the company teamed up with Israel Aerospace Industries on a 777 conversion program, and last year Michigan-based Kalitta Air agreed to lease three converted Boeing 777-300ERSF (with the “SF” standing for “special freighter”) widebody jets from GECAS. Russia’s S7 Airlines also leased two 737-800 Boeing Converted Aircraft (BCF) freighters from GECAS.

Converting a Boeing 777 to a cargo jet is no mean feat, involving some 200 people and roughly 39 months from first blueprint to first payload. The team needs to cut major sections of the fuselage for a new cargo door, for instance, and install a rigid barrier inside the plane that can withstand forces up to 9 Gs. “What we’re witnessing is really a re-engineering of the aircraft,” said Richard Greener, senior vice president and manager of GECAS Cargo. But all that hard work should pay off: Boeing projects that the market segment will double over the next 20 years, and that the world’s freighter fleet will expand from about 1,870 to 3,260 freighters. More than 60% of the new volume will be passenger-to-freighter conversions. 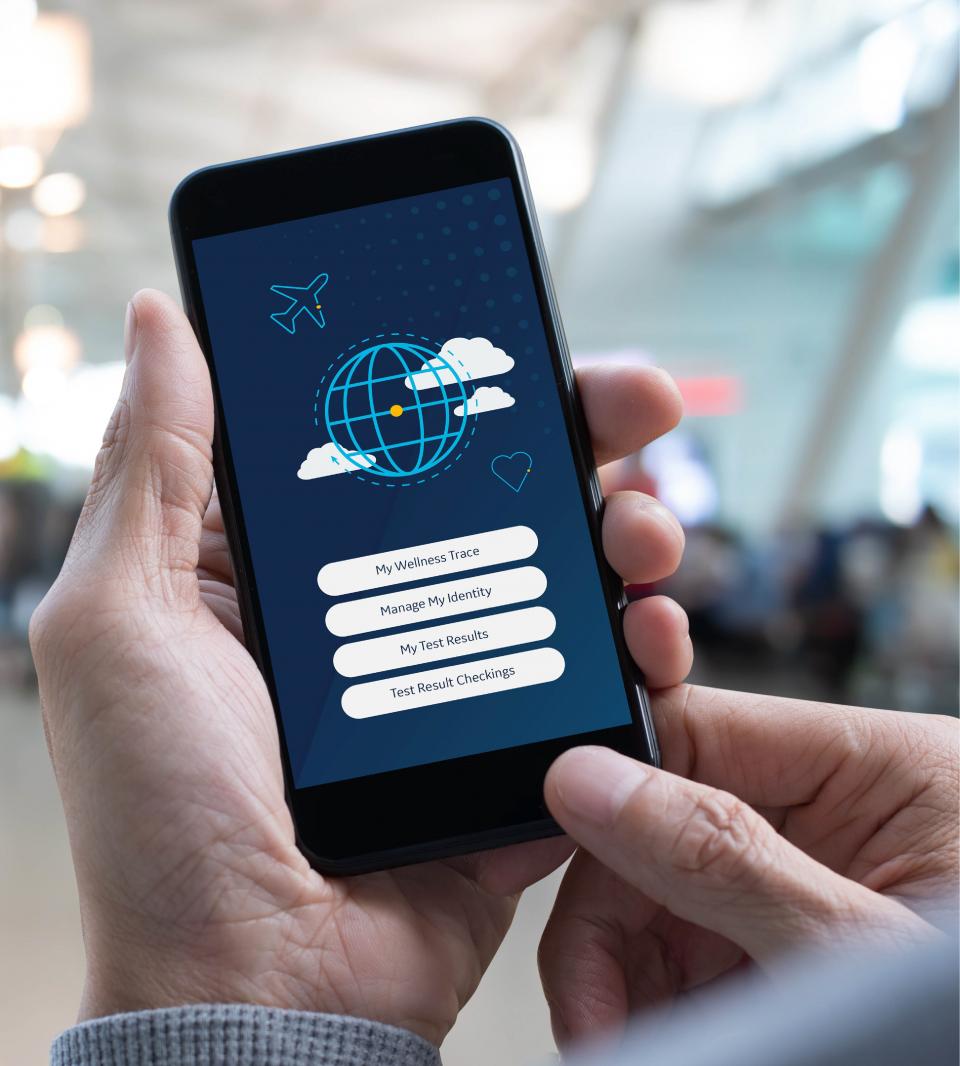 Flyers passing through the Albany International Airport may notice a new, albeit subtle, addition these days: stickers attached next to the bathroom entry door, check-in counters, even the food court. They may not look like much, but they could have a part to play as the aviation industry seeks to reassure passengers who might be uneasy about flying in the COVID-19 era. The stickers are affixed with QR codes that anyone can scan with a smartphone, then learn the last time that bathroom was cleaned, or when that check-in counter was sanitized. GE Aviation developed the app, which is called Wellness Trace, through a partnership with TE-FOOD, a company that uses blockchain to track the food-supply chain, and the laboratory testing company Eurofins.

“After 9/11, the industry set up the Transportation Security Administration, introduced PreCheck and fortified cabin doors — big things you could see,” says Andrew Coleman, senior vice president and chief digital officer at GE Digital. “Today, improvements aren’t so physical, because we’re fighting something you can’t see.” Coleman says Wellness Trace can give passengers “digital eyes” throughout their journeys. The Wellness Trace pilot program is the first step in turning the Albany airport into a sort of “digital incubator” that will explore a battery of cutting-edge technologies, including artificial intelligence and machine learning, with the aim of improving safety and transparency.

Working alongside colleagues at the Swedish startup Prismatic Sensors AB and GE Healthcare, the team found a new way to capture and analyze the X-rays passing through the body and render them into minutely detailed images. Image credit: GE Healthcare.

In 1895, the German physicist — and future Nobel laureate — Wilhelm Röntgen was experimenting with an electrified glass vacuum tube when he noticed that it produced mysterious rays that could pass through solid objects. He called them X-rays and launched the field of radiology. Soon Elihu Thomson, GE’s co-founder and first chief scientist, took up Röntgen’s work, designing an X-ray machine that could diagnose bone fractures. [1] And Thomson pushed GE to open the research labs where another scientist, William Coolidge, and researchers who followed him would advance the field even further — toward technology like computed tomography, or CT. [2]

Now, engineers at GE Research with their colleagues at GE Healthcare and the Swedish startup Prismatic Sensors AB hope to alter radiology’s course once again. The researchers have found a way to vastly expand CT’s already impressive imaging powers. The team invented a new way to capture and analyze the X-rays passing through the body and render them into minutely detailed images of the heart, say, or of nodules inside the lungs. They say their method is designed to enable doctors to see deep inside the human body with greater clarity and specificity while exposing patients to less radiation than traditional CT scans.

Their approach, which took decades to develop, uses a technique called photon counting and involves hypersensitive X-ray detectors made of "Deep Silicon" technology — a critical component that was difficult to develop. “We believe this technology has the potential to be a substantial step forward for CT imaging that will benefit millions of patients worldwide,” said Kieran Murphy, president and CEO of GE Healthcare.

In an indication of how momentous the promise of this technology is, GE Healthcare announced plans last year to acquire Prismatic — GE’s first acquisition since Larry Culp became the company’s chairman and CEO in 2018. “We believe this technology has the potential to be a substantial step forward for CT imaging that will benefit millions of patients worldwide,” said Kieran Murphy, president and CEO of GE Healthcare.

[2] “General Electric Research Lab: A hotspot for innovation on the plat for the last 111 years.” Edison Tech Center. <https://edisontechcenter.org/GEresearchLab.html>

There’s An App Store For That

AI apps will be available through Edison Marketplace, a future online store that allows customers to find and purchase algorithms from a range of third-party developers. Image credit: GE Healthcare.

The last time you bought a new car, you probably didn’t just write a check. You took it for a spin to see how it handles. GE Healthcare said in December that it would soon offer a similar service to hospitals interested in buying its latest software powered by artificial intelligence (AI). “This is a big deal for the healthcare industry,” says Ken Denison, vice president of digital platform and product marketing at GE Healthcare. “It’s rare to have the option to quickly find things, try them and decide to buy them or not.”

The option will come to life through Edison Marketplace[1], a future online store that will allow customers to find, try and buy algorithms from a range of third-party developers. Edison Marketplace is a key component of GE Healthcare’s AI software platform named after America’s father of invention and GE co-founder: Thomas Edison.

Some of the AI apps now available[2] help doctors glean insights into clinical data and improve outcomes. Radiologists can find applications that assist in the identification of breast cancer or prioritization of cases with possible collapsed lungs. Other apps could allow emergency physicians to track the extent of COVID-19-triggered pneumonia.

[1] Technology in development that represents ongoing research and development efforts. These technologies are not products and may never become products. Not for sale. Not cleared or approved by the U.S. Food and Drug Administration or any other global regulator for commercial availability.

Mural Virtual Care Solution, which launched in 2019, allows doctors and nurses to monitor the near real-time status of numerous intensive-care patients in one place. Image credit: GE Healthcare.

Doctors and nurses are, by nature, resourceful problem-solvers, using the tools they have available to save as many lives as possible. During the COVID-19 pandemic, that means finding new ways to observe their patients while lowering their own risk of infection and addressing the shortage of personal protective equipment (PPE).

The intensive care unit, or ICU, is one particularly critical area of the hospital that often brings together the sickest patients and many caregivers needed to frequently check on patients. As a result, nurses in one California hospital in an urgent need of a solution have reportedly turned to baby monitors to check on patients from afar.[1]

Mural Virtual Care Solution, which is enabled by Decisio Insights – a standalone 510(k) cleared device — allows doctors and nurses to access the status of many ICU patients in one central place. They are able to drill down into each patient dataset based on hospital defined prioritization and take a closer look at their vital signs in near real time, manage hospital defined protocols around lung protection and ventilation weaning, activate audio/video feeds of the room, and consult information in their electronic medical records.[2]

[1] Baby monitors in the ICU: Nurses get creative to save lives, critical equipment, ABC News, April 1, 2020.