The Boeing 777-300ER widebody passenger jet is the workhorse of long-haul aviation. Powered by a pair of giant GE90 engines — for a long time the world’s most powerful jet engine — the planes have allowed airlines to link continents and cities as distant as Los Angeles and Dubai with frequent nonstop flights.

But early this summer, one specimen arrived at an Israeli airfield set for a dramatic transformation into an air cargo freighter. The plane is a prototype for a program to convert 15 of the giant planes into a cargo configuration that will each be able to carry 100 tons of goods around the globe. As the 777-300ER replaced the iconic four-engine 747 jumbo jet for passenger airlines, the 777-300ERSF — with the “SF” indicating “special freighter” — is set to bring the same twin-engine efficiencies to cargo operators.

From the first blueprint to the first payload, the conversion program involves over 200 people and will take approximately 39 months to clear the myriad of steps including concept definition, design phases from preliminary to critical, physical conversion, and regulatory certification hurdles. For example, the team needs to cut major sections of the fuselage to fit the new cargo door, install a rigid barrier that can withstand forces up to 9 g’s and replace the entire composite floor structure with reinforced aluminum.

The team plans to transform the passenger deck into a full cargo compartment by modifying existing passenger doors and windows. The plane is expected to be able to carry many different kinds of cargo, including express shipments, online orders and perishables, as well as oversized freight — including even live horses or aircraft engines.

The plan also includes a supernumeraries compartment — basically, quarters for crew and company employees — right behind the pilots’ cabin where the galleys, lavatories, passenger seats and other areas were located. “Everyone thinks converting an aircraft from passenger to freighter is a simple process,” says Richard Greener, senior vice president and manager of GECAS Cargo, the freighter platform within GE Capital’s aviation finance business. “Instead it involves similar principles and regulatory requirements that you would face when producing a factory new build aircraft.”

GECAS has partnered with Israel Aerospace Industries on the program to convert the planes for planned delivery in late 2022 for operating lease to GECAS customers.

The first step is measuring every part of the fuselage to get an accurate rendition of the plane on the computer drawing board. Engineers use finite element modeling and extensive ground and flight tests to analyze how the conversion will affect the aircraft. With planned changes to include a new floor, adjustable storage configurations, a wider door and a cargo-loading system, engineers assess the shifts in stress on the plane’s fuselage to determine what additional modifications are needed. “What we're doing is really re-engineering the aircraft,” Greener says.

The goal is to minimize the weight of the plane and maximize the payload to make it as cost-efficient as possible. When the conversion is complete, the 777-300ERSF, aka the “Big Twin,” will be able to carry something as large as a GE90 aircraft engine on the main deck as well as express and e-commerce cargo.

Greener said he expects a significant milestone will come around next June. That’s when engineers will cut into the plane’s fuselage and bring the freighter design to life. “New structures such as the main-deck cargo door and cargo-loading system will be added to the aircraft and the transformation from passenger to freighter will begin,” he says.

Meanwhile, as the engineers make their changes to the plane’s designs, Israel Aerospace Industries will be working closely with the Civil Aviation Authority of Israel, U.S. Federal Aviation Administration and the European Union Aviation Safety Agency to validate the work and obtain the necessary approvals and certifications.

These conversions are expected to be a growing business for GECAS as cargo traffic is expected to grow significantly in coming years. Last year, for example, GECAS started leasing converted Boeing 737-800BCF jets to Amazon. Boeing projects that such market segment will double over the next 20 years, and that the world’s freighter fleet will expand from about 1,870 to 3,260 freighters. More than 60% of the new volume will be passenger-to-freighter conversions.

More information about the 777-300ERSF can be found on the program’s website. And in case you’re wondering what a Boeing 777-300ER looks like on the inside, a few years ago the American aviation enthusiast Luca Iaconi-Stewart built a detailed model of the plane from paper. The model includes details like bolts, hydraulic pipes and hinges, and features amenities such as food carts, galleys, and the hidden crew “rest module” that most passengers never get to see. GE Reports talked to Iaconi-Stewart about the project — find that story here and the video below: 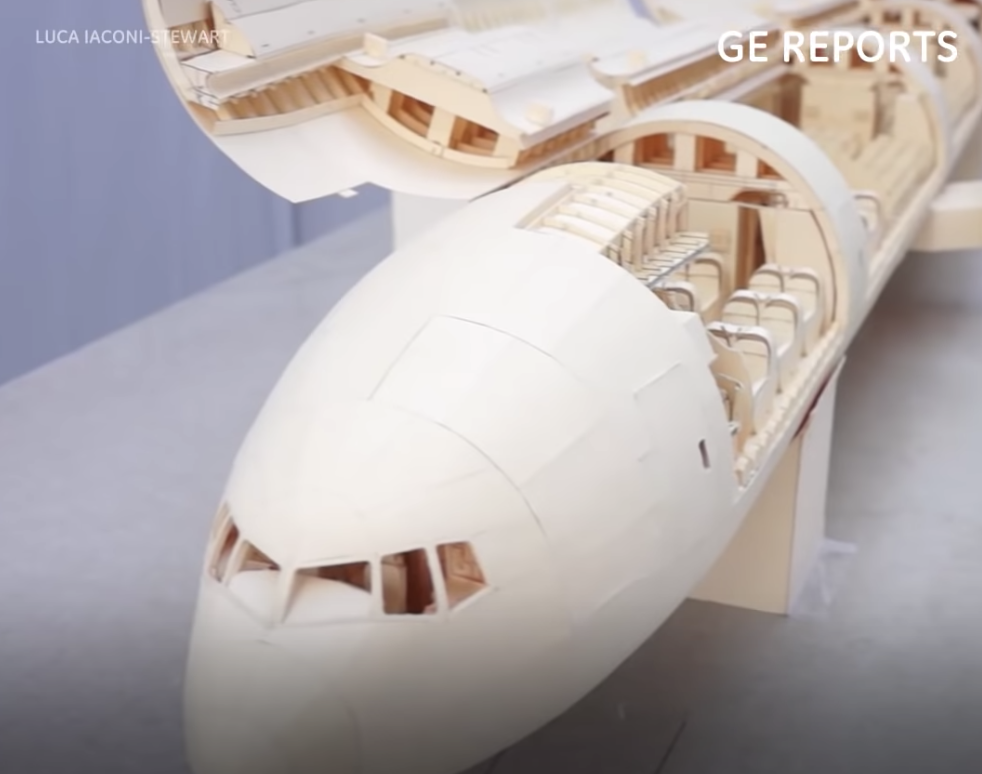