In most cases, increasing something by 1% doesn’t make too much of a difference. A 1% raise is nice, but it won’t buy you a vacation in Hawaii. You probably wouldn’t even notice if your body weight increased by 1%.

But when it comes to power plants, a 1% increase in efficiency can make a huge difference. One percent could save a power plant $40 million over 20 years.

U.S. energy giant Exelon is now one step closer to being a part of this power
plant efficiency improvement at two of their Texas-based gas-fired power plants. Over the past month, Exelon’s Wolf Hollow and Colorado Bend power plants achieved “first fire” of their 7HA.02 gas turbines built by GE. Each plant will house two 7HA turbines. And the sites are now on their way to being two of the most efficient power plants in the United States.

“First fire” is power-generation parlance meaning the first time the operators at the plants flip the switch and ignite the massive industrial gas turbines. It’s also the first time the plants will start consuming any fuel at all, in their bid to meet the growing energy needs of Texas. Both Wolf Hollow and Colorado Bend plants are expected to enter commercial operation later this year. 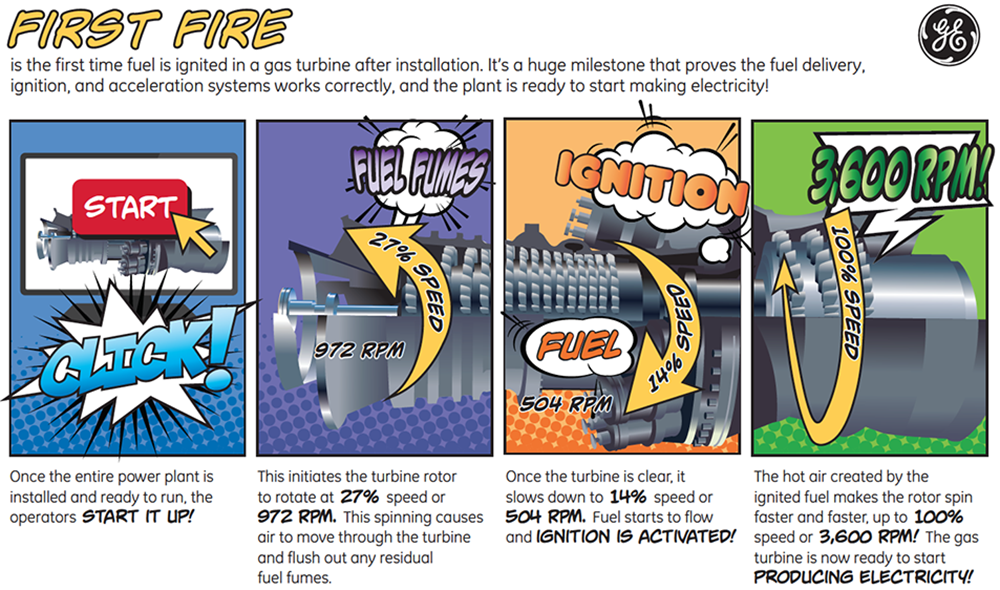 At the heart of both the Wolf Hollow and Colorado Bend plants is the HA technology—GE’s most efficient gas turbine technology in its class, achieving an overall efficiency of more than 62% in a combined-cycle plant.

The plants are on track to be as efficient and digitally advanced as the record-setting Bouchain power plant in France, which GE inaugurated last year. Bouchain holds the world record for the most efficient combined-cycle power plant at 62.22% efficiency, up from a previous record of 61.5%. And each Texas plant boasts a combined-cycle output in excess of 1 gigawatt.

The HA turbines incorporate some of the most advanced gas turbine technology ever constructed, says Vince Futia, who has been overseeing the expansion of Exelon’s Texas plants, from contract award to that all-important commercial operation, on behalf of GE. 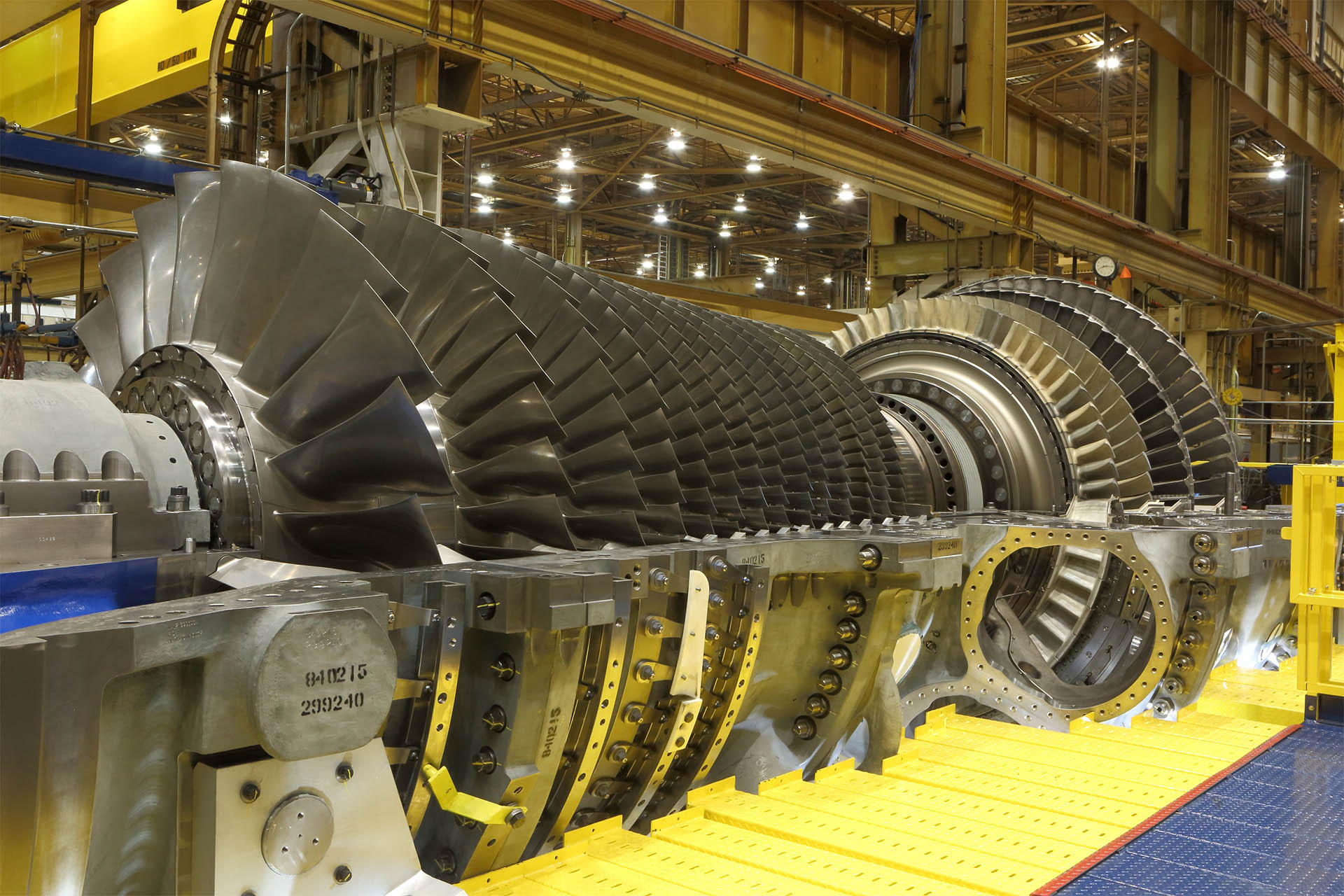 HA Gas Turbines in the Mix

The 7HA gas turbine will be a crucial part of managing Texas’ growing mix of gas-fired power and renewables. The sun doesn’t always shine and the wind doesn’t always blow, which means another energy source must pick up the slack. But it also means these plants have to be able to run at lower power when renewables are doing the heavy lifting.

“Texas produces more wind power than any other state,” says Walker. About 9% of the electricity produced in Texas in 2014 came from wind power generation, and there’s been an influx of solar power too, he adds. “You need these large gas turbines that are flexible to balance that,” and benefit from economies of scale, he says. “The alternative is lots of small units on the ground, and that’s inefficient.”

The gas turbines boast a ramp rate of up to 50 megawatts per minute, making them 50% faster than previous-generation gas turbine technology. It takes as little as 10 minutes from start command to full load, which is useful when the wind suddenly stops blowing and a gas-fired power station needs to quickly step up to meet the energy needs of a sprawling metropolis nearby.

If the wind starts blowing again, the gas turbine also can “turndown” to 25% of its rated power capacity—compared with an industry norm of 45%. Lower turndown means operators can reduce fuel consumption during off-peak hours. “And these turbines are extraordinary at running to low power levels while remaining emissions compliant.” Turning down instead of shutting down reduces start-up costs and ensures the gas turbines are ready to be ramped-up to full power. The net result is that Exelon will be able to provide the Texas grid with more low-cost energy due to larger, more flexible gas turbines. 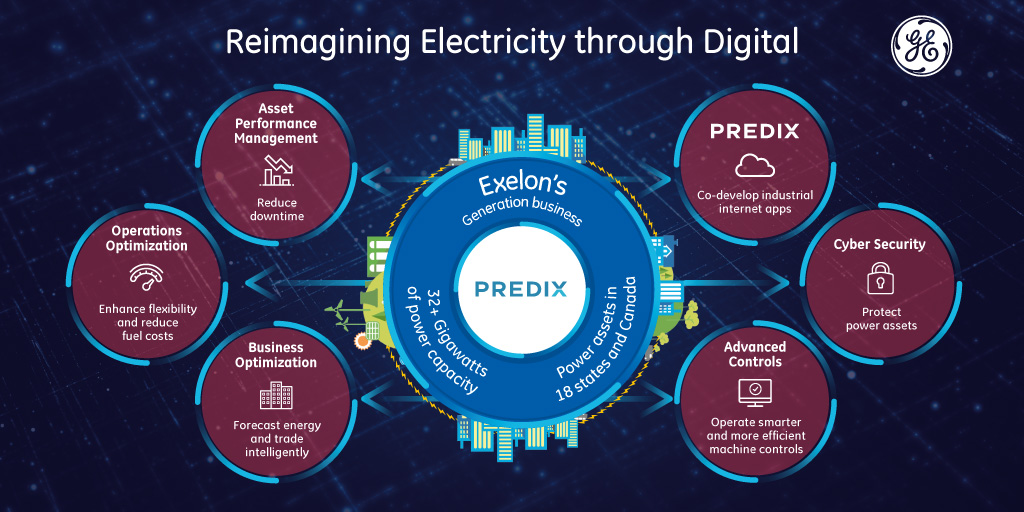 What will help push the Texas power plants over the top efficiency-wise is software. Exelon is using GE’s full software set to analyze and manage 90 power plants in 48 states including Wolf Hollow and Colorado Bend. The power plant software works over Predix, GE’s cloud-based platform for the Industrial Internet, and can make power plants up to 3% more efficient and 5% more reliable. It collects data from thousands of sensors around the plant to analyze factors such as when parts need maintenance, when they can be working harder and how to maximize efficiency.

“It’s the culmination of years of work,” says Walker. And it should help Texas produce cleaner energy for years to come.

GE and Exelon: From digitizing the company, to increasing efficiency and improving effectiveness

Exelon CEO Chris Crane describes how Exelon sees technology as a key part of the future of the company—from digitizing the company, to increasing efficiency and improving effectiveness—with Predix as a strong platform to drive the transformation. #GEPower #PoweringForward

Learn more about the 7HA

The Digital Power Plant Is Here!

Want to learn more about gas power plants and other energy solutions?