SAINT-NAZAIRE - WHERE HALIADE TURBINES ARE MADE

weigh of some parts 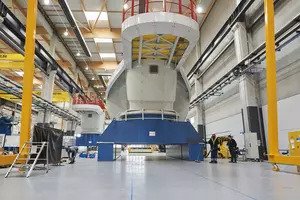 HOW IT’S MADE: GO INSIDE THE PLANT THAT MAKES THE WORLD’S LARGEST WIND TURBINES

How wind turbines are made is a complex process. The factory focuses on manufacturing Haliade generators, and assembling nacelles—the case that houses the generator and other equipment on top of the tower. Currently, there are 170 workers at the factory assembling wind turbines, a number that GE plans to almost double eventually.

One of the first steps the Saint-Nazaire team takes in the production of wind turbines is assembling the wind turbine rotors, a process that begins by attaching 256 magnets to the rotor, so that when it’s spun by the wind, the resulting magnetic field generates electricity. “The magnets are so strong the rotor makes electricity by just turning it from north to south on the shop floor,” says operations manager Jean-Baptiste Vilcoq.

After the rotor has been fitted inside the stator, the work of assembling and constructing the generator begins. Then the whole thing is then moved to a custom-built testing rig, which is run by the electricity generated by the turbine while it’s being tested (this also helps reduce stress on the local grid). Following construction of the wind turbine, testing takes around four days.

Finally, the workers complete the offshore wind turbine by attaching monitoring tools to the nacelle, spraying it with recovered rainwater to make sure it’s water-tight, then shrink-wrapping it, and sending it to the port to be shipped and transported. It’s a long process, but it’s been paying off: Haliades are now installed all over the world, and three more have been ordered for a demonstration project in China.

Learn more about the technology and innovation behind one of the world’s largest offshore wind turbine.

Read the full story at http://www.gereports.com/where-ge-makes-haliade-turbines/