From the outside, there’s nothing unusual about the Boeing 737 MAX 8 jet operated by United Airlines that flew from Chicago’s O’Hare to Washington’s Reagan National Airport with 115 people on board yesterday. But the plane made history. It was the first commercial flight with passengers on board to use 100% drop-in sustainable aviation fuel (SAF) for one of the aircraft’s two engines.

“Today’s SAF flight is not only a significant milestone for efforts to decarbonize our industry, but when combined with the surge in industry commitments to produce and purchase alternative fuels, we’re demonstrating the scalable and impactful way companies can join together and play a role in addressing the biggest challenge of our lifetimes,” said United CEO Scott Kirby, who was on the D.C. flight. 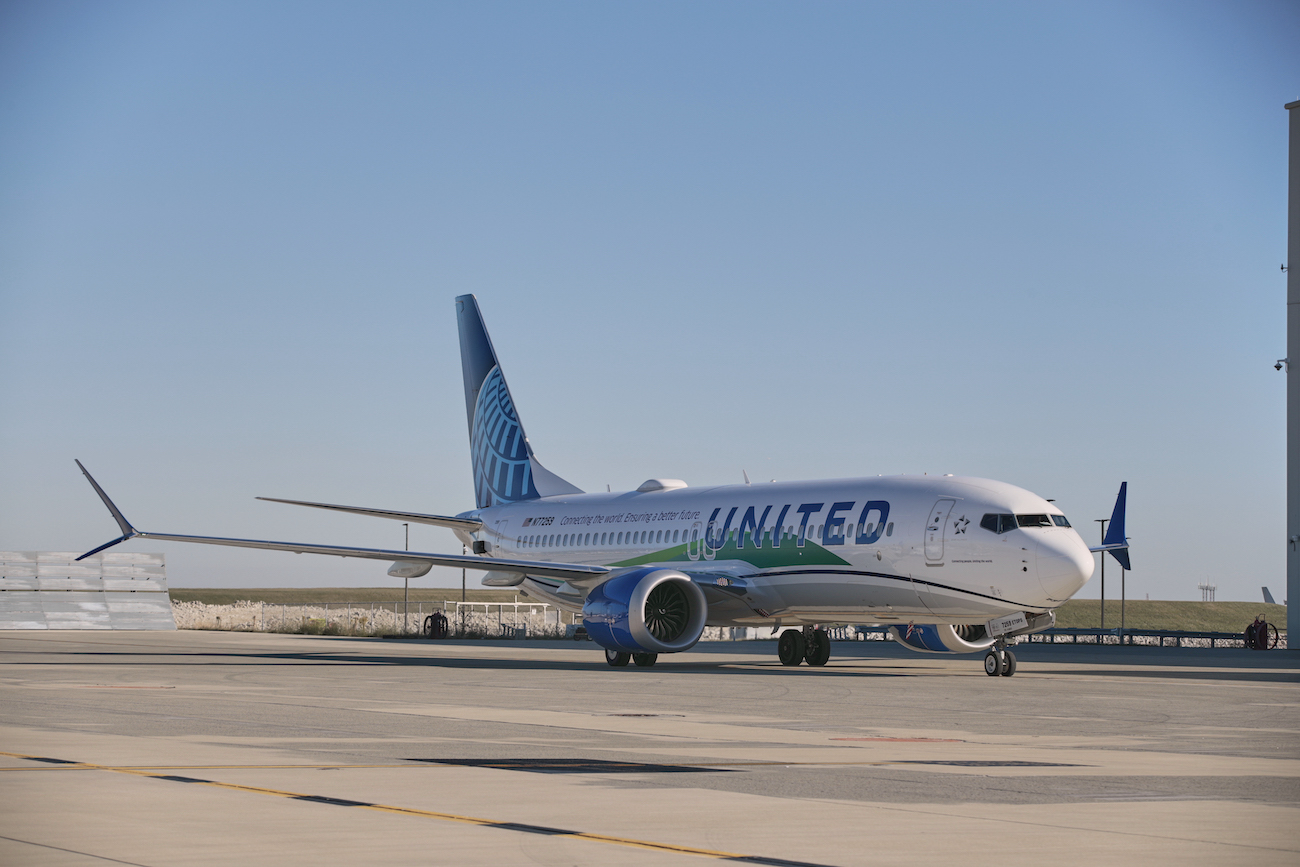 Another person on board was GE Aviation’s CEO, John Slattery. The jet used a pair of LEAP-1B engines developed by CFM International, a 50-50 joint company between GE and Safran Aircraft Engines. GE has also been researching the use of SAF in its engines. Recent flights operated by Etihad Airways and British Airways used a fuel mix containing SAF, and GE Aviation is also working with Emirates on plans to test 100% SAF in 2022.

Currently, international standards following the process developed by ASTM International (which develops technical standards) permit airlines to use a maximum of 50% SAF in commercial flights. So on this demonstration flight, United operated one of the plane’s two engines on 100% conventional jet fuel and the other one on 100% SAF — about 500 gallons in each engine. 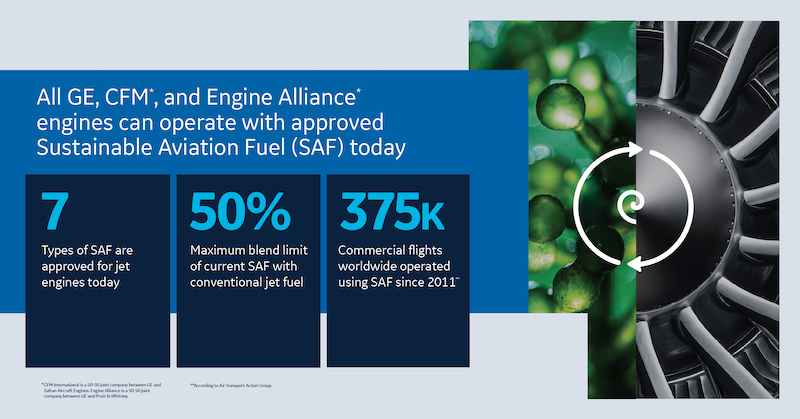 The SAF used by the jet was “drop-in” ready, meaning it is interchangeable with conventional Jet A and Jet A-1 fuel and requires no modifications to engines or airframes. This also makes it compatible with the existing commercial fleet and the existing fuel distribution and storage infrastructure. “These molecules don’t know where they come from,” says Gurhan Andac, GE Aviation’s engineering leader for aviation fuels and additives, about the difference — or the lack thereof — between SAF and conventional jet fuel. Andac, who was also on board the United flight, has played an important role in researching biofuels and synthetic fuels for engines and promoting their use. He also chairs an international task force to develop standardized industry specifications supporting adoption of 100% SAF.

GE Aviation’s SAF testing includes several industry-first flight tests: the first SAF commercial demonstration flight (2008), the first SAF transatlantic flight of a large freight commercial airplane (2011), the first 100% SAF military jet flight (2016) and, earlier this year, the first use of power-to-liquid (PtL), in which renewable electricity is used to split water into hydrogen and oxygen, then the resulting H2 is used with captured CO2 to synthesize liquid hydrocarbon fuel. 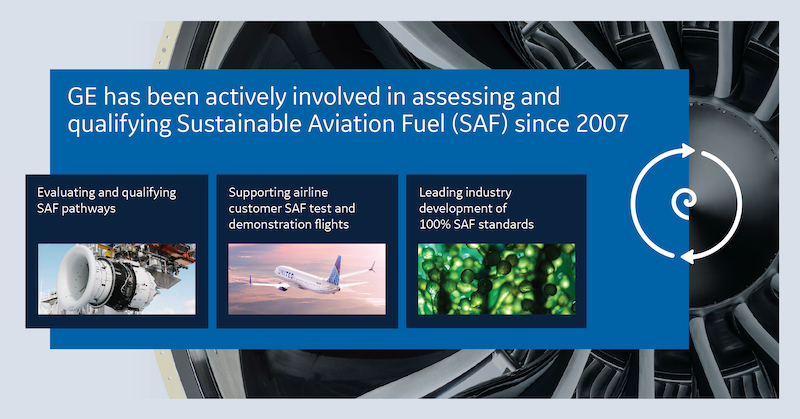 Besides CFM, United partnered on the flight with Boeing, Virent — a subsidiary of Marathon whose technology enables 100% drop-in SAF — and World Energy, the world’s first and North America’s only commercial SAF producer.

United says it has made the largest commitment of any airline to the transition toward SAF. Last spring it launched the Eco-Skies Alliance program, in which a list of 29 corporate partners and counting have collectively contributed toward the purchase of approximately 5.7 million gallons of SAF this year alone. This is enough SAF to eliminate approximately 53,000 metric tons of GHG emissions, or enough to fly passengers over 372 million miles.

Sustainable aviation fuel can be made from any of 60 different feedstocks — among them plant oils, algae, greases, fats, waste streams, alcohols, sugars, captured CO2 and other alternative feedstock sources and processes. The Department of Energy estimates that the United States alone has the resources to produce 50–60 billion gallons of SAF per year. For context, commercial airlines will use about 57 billion gallons of fuel by the end of 2021, down from a peak of 95 billion gallons in 2019, according to Statista. By switching from petroleum to SAF — when you take into consideration the entire life cycle of the fuel — the aviation industry could reduce its carbon contribution from fuel by up to 80%, according to industry associations the Air Transport Action Group and the International Air Transport Association. 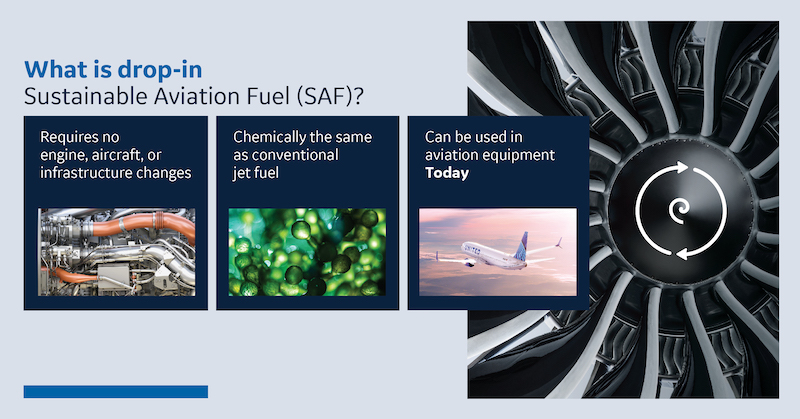 But so far, only a fraction of 1% of the fuel consumed in aviation is SAF. To spur more investment in SAF and create more supply, demand must first grow, which is why United hopes the flight will set an example for others to follow. “Drop-in SAF is something our industry can adopt now to begin making inroads on our commitment to be net-zero carbon emissions by 2050,” says Gaël Méheust, president and CEO of CFM International. “Along with our parent companies, GE Aviation and Safran Aircraft Engines, we applaud United for taking this bold initiative and look forward to even greater cooperation in the future.”