Time-Sensitive Networking (TSN) is an evolving technology that enables the use of standard (commercial) Ethernet for industrial applications by introducing previously lacking features of reliability and determinism to commercial Ethernet. The well-known benefits of Ethernet – interoperability, scalability, evolvability, and ubiquity – combined with industrial grade performance enables a cost-efficient communication solution in aerospace, energy, automotive, and many other industries.

Ethernet is defined by IEEE 802.3 and 802.1 standards. TSN comprises of a set of amendments to 802.1Q standard that address time synchronization, traffic policing and shaping, path control, frame replication and elimination, configuration, and management. Additionally, TSN profiles are being developed by standard bodies to enable cost-efficient adoption of TSN in certain verticals.  GE is leading the development of TSN profile for Aerospace Ethernet – a joint project between IEEE and SAE.

GE Research, in close collaboration with business units, is working on deployment of TSN based solutions in the transportation, energy, and aerospace sectors. In particular, the research team is focused on scheduling, configuration, analysis, and security of TSN in real world use cases. One outcome of this research is Chronos – a software tool that allows one-step configuration and analysis of complex time-sensitive networks as shown below. 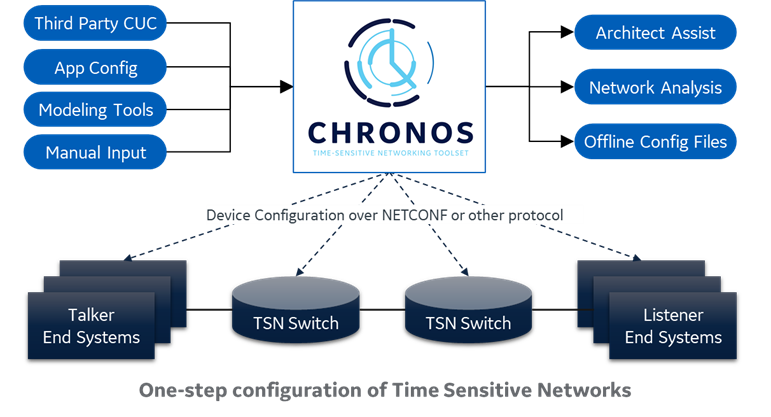 Another area of development is secure time synchronization, wherein the team has added symmetric key authentication to generalized precision time protocol (gPTP) based on IEEE 1588-2008 Annex K. Using this method, participants in the time distribution tree authenticate all protocol messages using symmetric keys. Messages from participants with invalid key are suppressed, thereby eliminating them from the time distribution tree. This solution was implemented on open source linuxptp package. GE Research’s version of secure linuxptp is available at on github project: adding Annex K to linuxptp. The secure PTP work was supported by the Department of Energy under Award Number DE-OE0000894. Read more about DoE project.

In partnership with GE business units, the research team is helping develop and deploy a complete ecosystem of TSN hardware, software, and tools for industrial applications. This technology has been already deployed to our customers via networking products in avionics and locomotive controls.