Multi-gas sensors based on dielectric excitation

Multi-gas sensors based on dielectric excitation

Existing gas detection solutions often are the result of tradeoffs between instrument performance, power consumption and size. Traditional analytical instruments could be inconvenient and costly, even in portable configurations, with reduced carrier gas, vacuum, and power demands, but are an unavoidable alternative over existing gas sensors. At GE Research, we're aiming to change the status quo with our multi-gas sensor solution.

Conventional wisdom, based on certain learnings and assumptions from mathematical principles and design rules, suggests that any gas sensor that fits on the face of a penny could not possibly outperform a big analytical instrument.  Gas sensors normally provide only a single output (resistance, light intensity, etc.) while traditional analytical instruments have one or more types of independent variables in their response, e.g. retention time in gas chromatography instruments (Fig. 1a, b). In these and other systems, independent variables (outputs) allow identification of different gases and rejection of interferents (Fig. 1c). However, miniaturization of such traditional systems is reaching a plateau based on laws of physics and laws of electronics.

The cover story in the May issue of Nature Electronics (https://rdcu.be/b35YH) presents a detailed report on how GE Research is boosting the performance of commonly found gas sensors – semiconducting metal oxide (SMOX) chemiresistors. Our excitation scheme, based on contemporary electronics, enables highly desired features, such as linear sensor response (R^2 > 0.99), dynamic range of six decades of gas concentrations, 50-fold improvement in the limit of detection, and cancelled effects from ambient temperature from -25 to 50 ℃. We lab-tested our excitation scheme with numerous volatiles (benzene, formaldehyde, hydrogen sulfide, hydrogen, carbon monoxide, methane, ethane, propane, etc.) and did field validations in wireless sensor network, drone-based, and wearable formats. The core of our technical approach is the dielectric excitation principle in the sensor design and formation of independent spectral variables in sensor response to deliver sensor performance comparable to traditional analytical instruments (Fig. 1c), and with reduced size and power (Fig. 1d-g). Our solution allows previously unachievable deployments because of its extreme miniaturization.

The evolution in developments of diverse types of gas detectors is outlined in Fig. 2 as three technology curves. Natural organisms are also being used for gas detection for industrial safety, homeland protection, etc. These days, while canines continue to be applied for detection of drugs, explosives, etc. their training is ~$50,000 per dog and their accuracy is only 50% in real-life situations. Single-output gas and vapor sensors have been under development for many decades. We see tremendous merits of single-output sensors in providing solutions to measurement needs in scenarios where selectivity of the response is not required. However, as the complexity of analyzed samples increases, single-output sensors rapidly lose their performance accuracy. Combining single-output sensors into arrays is a common compromise of poor selectivity of existing sensors. Over the years, the field of sensor arrays has matured to understand the gigantic unsolved problem of uncorrelated drift of each sensor in an array outside controlled laboratory conditions. Thus, at present, classic analytical instruments successfully compete with gas sensors for high value applications where selective gas detection is critical. 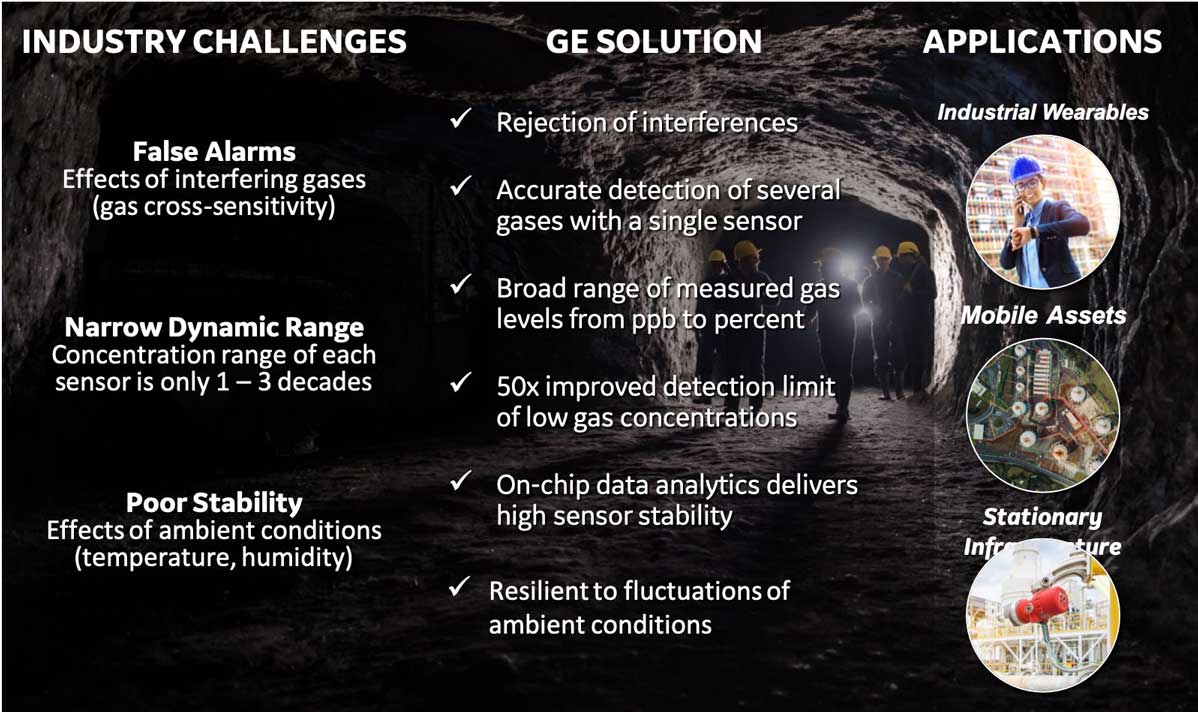 Thus, by understanding the mathematical principles of operation of traditional analytical instruments, we can build new sensors with the goal to perform on par with these traditional analytical instruments, and deliver solutions for diverse applications in our contemporary and complex world.  Examples of unsolved gas-sensing challenges in diverse industrial applications and our solutions are illustrated in Fig. 3.

As we look ahead, could we recognize 5 – 10 volatiles with a single sensor?  What about 20 – 50 volatiles? Can we reject ambient interferences to allow detection of parts-per-billion and parts-per-trillion levels of volatiles of interest in ambient air?  To answer these and other challenging questions, we are actively seeking and building new collaborations to commercialize this technology.