Over the past several years, ultrasound technology has rapidly trended toward low-cost and miniaturized implementations, laying the foundation for widespread adoption of the technology in the same way that smartphones or computers became cheap and widely available. However, a skilled sonographer (operator) is still required to perform a successful scan, limiting adoption to where you have a trained expert. If we can enable novice users to perform ultrasound scans (general medical professionals, doctors, nurses, people throughout the developing world, and even someday people in the home), we open the technology to widespread growth. By enabling these users, ultrasound can provide improved quality of care with increased access to basic screening exams, access to ultrasound in the developing world, reduction of unnecessary referrals to high-cost imaging modalities, and reduction in scan times and variability of diagnosis. 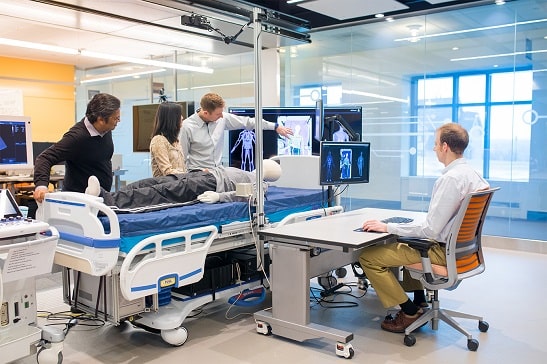 The team demonstrated a proof-of-concept holistic solution that automates many operator actions and guides the operator through the exam. They explored the fusion of many technologies, such as sensing systems, probe and patient tracking, image processing, atlas-based registration, deep learning, anatomy modeling, AR visualizations, and robotics to realize this vision. Similar themes are present in other medical imaging modalities and industrial applications, and we see clear opportunities to translate and integrate this technology there as well.

This mission developed and spread the vision internally and externally of the comprising technologies and impact of furthering Autonomous Imaging systems. It served as an incubation of ideas in this space, and as a result have fed two new external pursuits, was a key enablement for an internal GE Research project, and informed GE Healthcare product roadmaps.