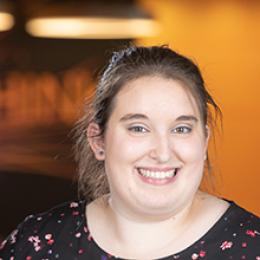 She did her undergraduate degree at Union College, majoring in Mechanical Engineering and minoring in Chemistry. While there she conducted cross-disciplinary mechanical engineering and chemistry research for developing nanomaterials for photo-voltaic cells. During this research she used a manual probe for conductivity characterization, authoring a procedure that has since been used for future testing. Her senior thesis was a collaborative team project for SAE’s Aero Design Competition, designing a RC (remote controlled) plane with a ten-foot wingspan. The team received second place for their design report. For her various achievements throughout her college career, she was awarded the Warner King prize her senior year. She was also fortunate enough to be apart of Tau Beta Pi, Pi Tau Sigma, and Sigma Xi.

She received her masters from Imperial College of London for a M.Sc. in Aeronautical Engineering. Her final thesis was on CFRP (carbon fiber reinforced polymer) tube flexure optimization; a type of self-deploying hinge method for space applications. This project mainly focused on HPC (high performance computing) optimization to improve better performance through use of Abaqus’ FEA software.