The Edison Edge: Hacking the future of industry

The Edison Edge: Hacking the future of industry

On July 10th, thirty young engineers gathered for the EEDP Hackathon, an all-day event in GE Research’s Forge Lab, where EEDP members and interns were presented with dynamic issues facing sectors that are important to GE Research’s customers, like autonomous management of Unmanned Aerial Vehicles (UAVs) and preventing premature births.

Designed to promote teambuilding and creative problem-solving, the event gave some of GE Research’s early-career talent the chance to develop new solutions addressing technology problems that have the potential for real impact with GE Research’s customers and partners, like GE’s businesses and the U.S. Government.

Prior to the Hackathon, participants organized into five teams based on the problem that interested them and prepared for the event, performing background research and formulating a plan with clear goals to ensure they were ready to jump into problem-solving on the day of the event. The teams spent the day performing research, building models and generating conclusions before reporting out to GE Research’s sector leadership teams and their fellow program members.

Intrigued with what the team’s concluded? Keep reading for more details on each team’s challenge and findings below.

Is integrating a powerplant and an indoor farm a viable option to achieve site carbon neutrality? That’s what team Powered Plants intended to find out when they looked at how to combine electricity and crop production to reduce ecological impact. Ideally, the system would emit less CO2 than conventional outdoor industrial agriculture or potentially have net zero CO2 output.

The team analyzed current technology and infrastructure to develop a model for an indoor farm that uses a percentage of a gas turbine’s power capacity to grow lettuce, which has a high usable biomass compared to other fruits and vegetables. They found that a one-acre indoor farm optimized for use of space could contain the same volume of plants as a 384-acre outdoor lettuce farm while also producing more lettuce heads per year, thanks to the approximately 21-day growth cycle of lettuce that is produced indoors. 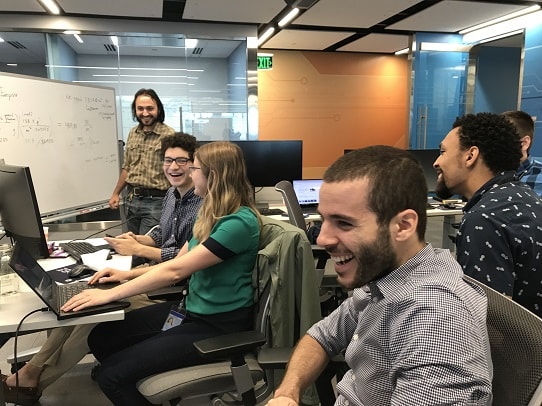 The group looked at pairing the gas turbine and indoor farm with reforestation and other mitigation techniques to reduce the location’s carbon footprint. By running exhaust gases from the power plant through the indoor lettuce crop, up to 5% of CO2 emissions would be consumed. Carbon sequestration through the growth of a forest would account for the remainder of the model’s emissions, yielding net zero CO2 emissions.

Powered Plants concluded that alternative carbon treatment options like carbon cleaning and hydrogen-doped fuel are less likely to be commercialized, namely due to the complexity and cost of manufacturing and operation. Future research may increase the viability of other potential solutions, such as enhanced geothermal systems and the use of biofuels.

In the emerging unmanned aerial vehicle (UAV) market, developers are facing a new battle: how to benchmark and design a system that can safely and accurately manage drones and other UAVs. Currently, ground-based air traffic control (ATC) units track and manage manned aircraft like commercial jets, but there is no singular system to oversee, track and manage all types of aircraft. That’s where the Game of Drones team comes in—on the day of the hackathon, they brainstormed road markers and limitations for designing a system that manages UAVs without interfering with current ATC systems.

Using mission manager and path planner software, the team designed a high-level flight plan to demonstrate current UAV management system capabilities. In the simulation, they introduced a no-fly zone to the drone’s flight path, causing the drone to alter its path in real time to avoid the obstacle. The simulation has applications for the management of real drones, which fly at a low altitude and therefore need the capability to detect, identify and avoid obstacles like buildings. 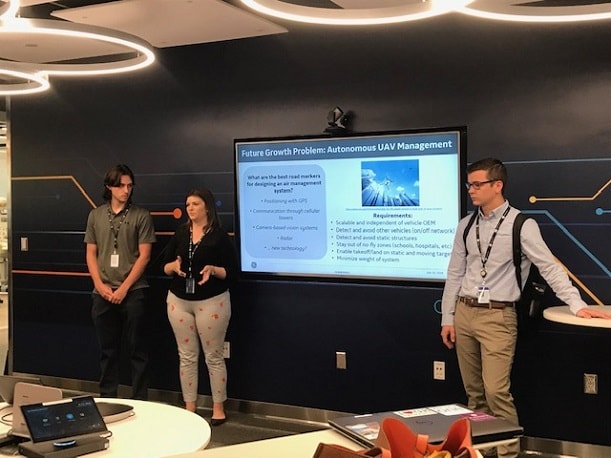 When a UAV management system is put in place, it will be necessary to connect drones with the system for in-flight data transfer. Real-time computing scenarios will require reliable, high-speed wireless networks to facilitate quick communication between the drone and the management system, especially if computing occurs in the cloud rather than at the edge. New technologies like 5G and the Automatic Dependent Surveillance-Broadcast (ADS-B) system, which allows an aircraft to determine and broadcast its location data, may help promote wireless communication between UAVs and operators. As Game of Drones concluded, the challenge going forward will be to create a UAV management platform that utilizes the newest communication and navigation technologies and has interoperability with current systems.

The manufacturing of onshore wind turbine towers involves the construction of a massive concrete base that can support the load of the turbine. Due to the size of the base, shipping and labor costs associated with traditional manufacturing techniques are extremely high. Increasingly, manufacturers are exploring additive manufacturing of the base, which could reduce labor costs by 50-80%, reduce construction time by 50-70%, and allow for better customization, optimization and sustainability of the design. 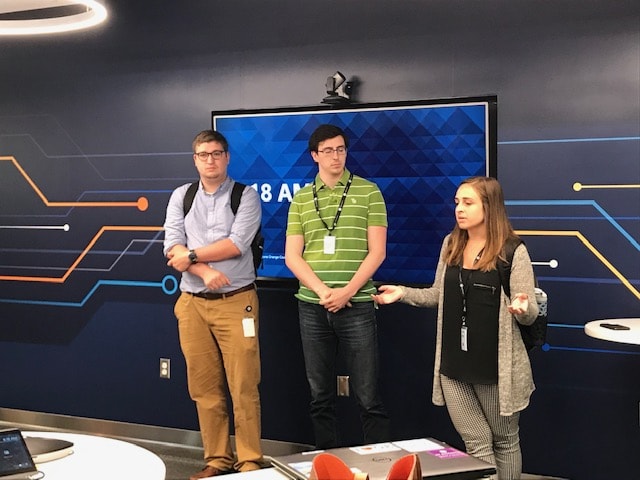 Using a decision matrix that measured effectiveness and labor, capital and development costs, the team explored eight rebar automation methods before researching the four highest-scoring designs in-depth. The team identified benefits and challenges for these concepts and made a recommendation on which method to pursue. They also proposed techniques to mitigate potential risks associated with the design, such as precision and environmental variability.

When onshore wind turbines sustain surface damage from environmental factors like rain, sand and frost, the turbine loses efficiency, leading to power losses that result in high monetary losses over the lifetime of the turbine. Team Rough Draft was tasked with developing a low-cost method to repair cosmetic and structural defects caused by such environmental damage and to clean current-generation turbines while minimizing downtime.

The team analyzed the effectiveness of two different approaches: a passive mitigation solution that is built into the turbine system, like a coating or sleeve, and a reactive repair solution that utilizes autonomous solutions to clean and maintain the turbine. The development of an automated cleaning system involves three major components. There are several existing locomotion methods, from magnetic tower crawlers and drones to helicopters. And each type of environmental damage has a multitude of possible end effectors, including brushes and solvent spray for cleaning and polishes or paint for repair. Additionally, the level of automation and human intervention could vary between cleaning systems. 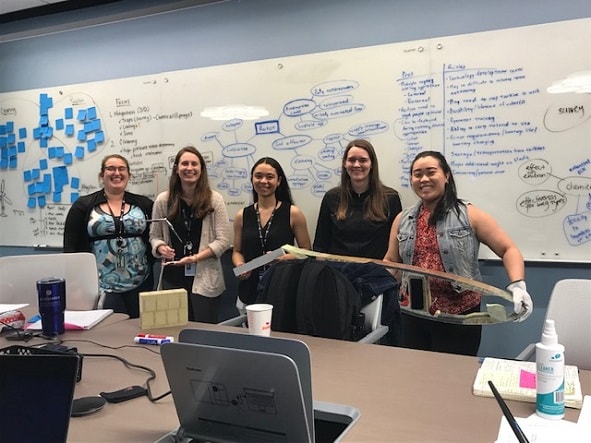 After learning that wind turbine power can be reduced by up to 50% when insects hit the blades, the team investigated the development of a coating that would keep pests away from the turbine. Coatings might be highly individualized, depending on the types of insects present in the environment of different turbines. Ideally, the coating would be nontoxic and easy to integrate with current processes. Rough Draft outlined a five-step project plan for the research, development, testing and production of a deterrent that could reduce insect-related erosion and result in significant cost savings over a turbine’s lifetime.

Preterm birth, which occurs when a baby is born at less than 36 weeks, happens in 11% of births worldwide and is the leading cause of death for children under 5. Preterm birth can be precipitated by factors like low hormone levels, preexisting health conditions, or uninformed, at-risk mothers. To address this problem, team Carry2Cantaloupe looked at how to engage pregnant women with at-home smart devices to assess risk factors and drive preventative behaviors. Current pregnancy apps can track factors like the mother’s mood, number of contractions or kicks while also connecting expectant mothers through chat rooms. The team looked at integrating tracked user data like healthy weight gain, progesterone levels and stress sensor data to create an app that addresses as many pregnancy and preterm birth factors as possible. 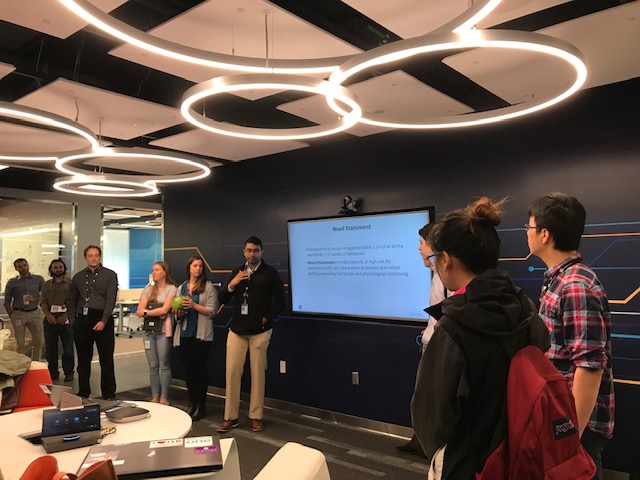 The group looked at both digital and physical solutions to collect, track and monitor data from pregnant women. They designed two devices that would monitor levels of progesterone, which keeps women from having contractions. Other risk factors, like exposure to particulate matter in the air, could be tracked via a sensor which transmits and collects data points. The team designed an app demo that tracks and aggregates this data, allows users to take risk factor surveys, and has a chat functionality. Going forward, the team decided, additional risk factors will need to be identified and further data tracking options developed to improve the scope of the app.