The race to decarbonize flight just picked up speed. Airbus and CFM International said this week they’ll collaborate on tests of an aircraft engine fueled by hydrogen.

As races go, this is a long-distance one. The partners will go to work immediately, with the aim of performing the first tests around the middle of this decade. This demonstration could pave the way for an aircraft that, if all goes according to plan, would carry passengers in the mid-2030s while producing no carbon emissions during flight.

Airbus, the French aerospace manufacturer, first announced its plans to fly on hydrogen in September 2020, dubbing the project “ZEROe.” The plane-maker unveiled three concept aircraft at the time that would rely on hydrogen as a primary power source and would “help us explore and mature the design and layout of the world’s first climate-neutral, zero-emission commercial aircraft, which we aim to put into service by 2035,” said CEO Guillaume Faury.

CFM International is a 50/50 joint company between GE and Safran Aircraft Engines.

Hydrogen, which happens to be the most abundant element in the universe, produces no CO2 emissions when it burns. It has long been held up as a possible potent ally in humanity’s quest to curb carbon emissions. 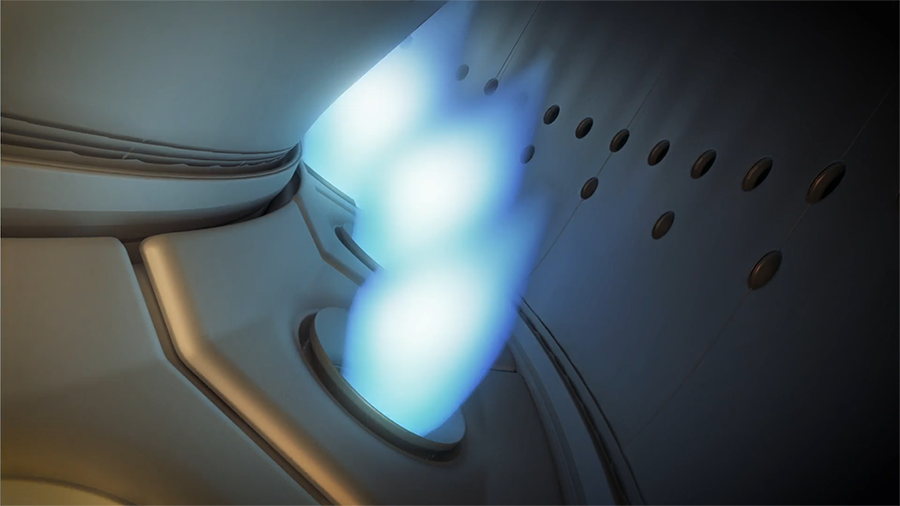 But the challenges of using it as an aviation fuel are daunting. GE Aviation’s Sean Binion, the hydrogen engine systems leader for the demonstration program, likens these challenges to those faced by the early space industry. Beyond just the technology development aspect, there are very real issues in establishing operating procedures, the development of new infrastructure and — ultimately — certifying a product. He says that it would be impossible without partnerships like this one, which comprises contributors all over the world.

The engineers at GE Aviation and Safran Aircraft Engines — a team that already numbers 100 and is growing fast — are working to modify a GE Passport jet engine. This includes a complete overhaul of its combustor, fuel system and controls system to make them compatible with liquid hydrogen fuel. The group picked the Passport because of its size, advanced turbomachinery and ability to operate at the appropriate pressures and temperatures for the flight platform.

When flight tests begin around the mid-2020s, the modified engine will be mounted on the rear top of the fuselage on an Airbus A380, the world’s largest commercial airliner, powered by its original four engines. But the new configuration will allow the team to test the modified hydrogen-powered engine’s emissions, including contrails, and monitor them separately.

Massimo Varriani, European system leader for the hydrogen program at Avio Aero, a GE Aviation company, says “the purpose of the project is to demonstrate the technology,” and the resulting prototype will later be scalable to work with different sizes of engines and different types of aircraft applications. Ultimately, it could be applied to various designs like Airbus’s three ZEROe concepts, which include a turbofan engine, a turboprop and a futuristic blended-wing design. “What is important is that we demonstrate we can fly with an engine that is burning just hydrogen, we have the storage capability of hydrogen in the aircraft and we have a system that is capable of distributing the hydrogen fuel into the combustor with the proper characteristics,” Varriani says.

Storing the hydrogen onboard presents another big engineering challenge. Because H2 naturally exists as a gas — which, if carried in sufficient amounts for passenger jet travel, would take up more storage space than the entire plane — it will need to be stored in liquid form, which means cooling it to about minus 253 Celsius (423 degrees Fahrenheit). That liquid hydrogen will then need to be vaporized into gas to be used as fuel — this will mean that certain parts of the engine could see temperature differences of some 1,500 degrees Fahrenheit.

It’s no small task, but Binion believes the team is up to the challenge: “CFM is committed to working with our partners to decarbonize aviation,” he says. “And our team is passionate about succeeding on this project. It’s both exciting and gratifying … We’re very tangibly inventing and executing on a key element of the future of sustainable flight.”

In October 2021, the Air Transport Action Group (ATAG) announced a goal of achieving net-zero carbon emissions in the aviation industry by 2050, by helping deliver the technologies to make that possible. CFM and Airbus, as signatories to that pledge, have both rolled out ambitious plans in recent years.

CFM’s RISE (Revolutionary Innovation for Sustainable Engines) Program, announced in June 2021, aims to develop the technology that could lead to an engine that would use 20% less fuel and produce 20% fewer CO2 emissions than the most efficient jet engines today using conventional jet fuel. Additionally, a configuration compatible with hydrogen technology developed as part of the CFM and Airbus combustion demonstration would result in zero carbon emissions during flight.

Sustainable aviation fuel (SAF), made from renewable biomass and waste products, has also started to take off: Last October, Etihad Airways employed a fuel blend containing SAF among an array of existing solutions on a regularly scheduled long-haul flight from London to Abu Dhabi. That flight produced carbon emissions 72% below those of an equivalent flight two years earlier. In December, United Airlines operated the world’s first passenger flight using 100% SAF in one of its CFM LEAP-1B engines.

But for airlines to move their fleets over to H2, there will need to be a concerted effort to produce more H2 — which can be done in a more renewable fashion if the power used to produce it is derived from sources like wind and solar. The good news is, GE Gas Power already has years of experience in using hydrogen in power plants; its turbines have logged more than 8 million operating hours running on blends of hydrogen, including green hydrogen in several recent demonstration projects. The knowledge and experience from those projects will be one of many instances of cross-pollination within GE and across the partnership that Binion says are reason for optimism.

Gaël Méheust, president and CEO of CFM International, agrees: “Bringing together the collective capabilities and experience of CFM, our parent companies, and Airbus, we really do have the dream team in place to successfully demonstrate a hydrogen propulsion system.“