Have SAF, Will Fly: USDA Meets With GE Aviation On Sustainable Aviation Fuel To Reduce CO2 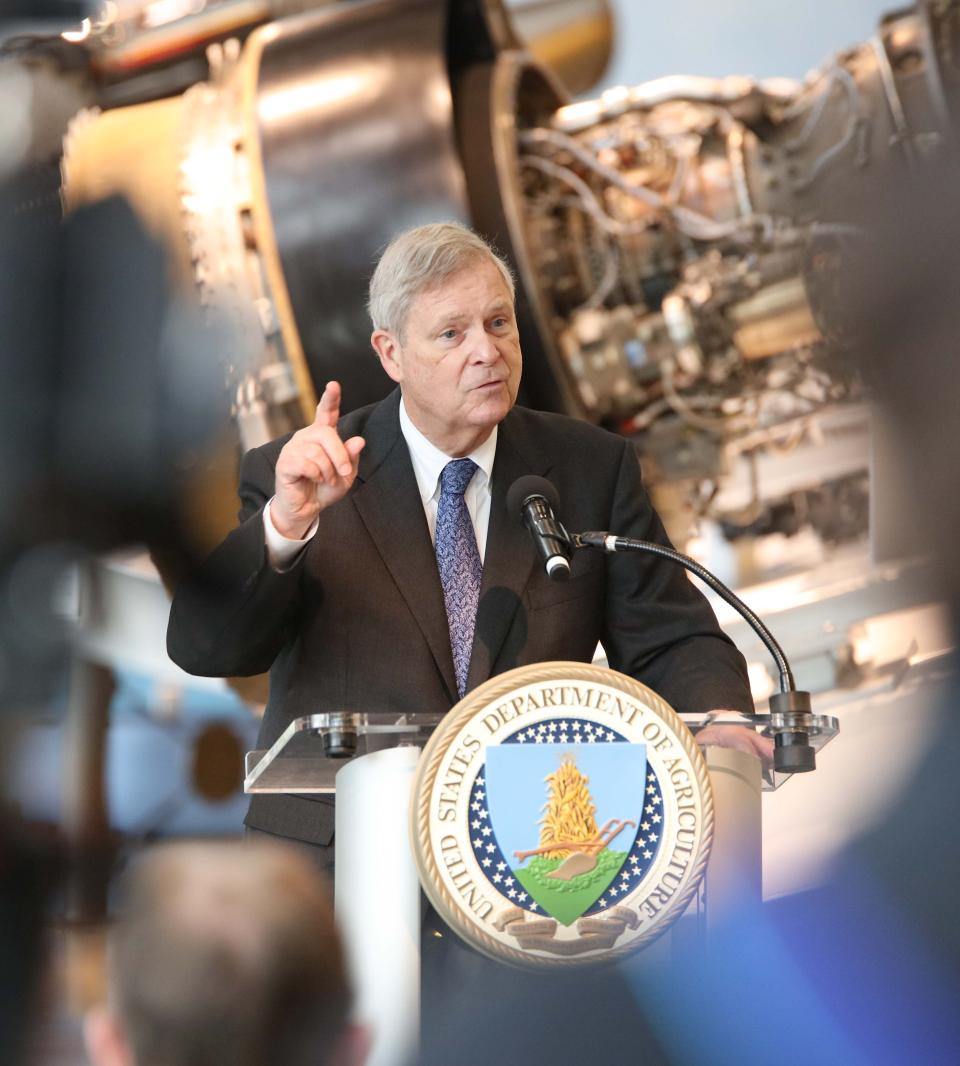 After leading Secretary Tom Vilsack on a tour of the engine development assembly facility at GE Aviation’s headquarters in Evendale, Ohio, in early December, chief engineer Chris Lorence posed a rhetorical question to the reporters assembled for a news conference: “What does the Department of Agriculture have to do with aviation?”

A lot, it turns out.

Secretary Vilsack was visiting GE Aviation’s headquarters to promote, as he put it, a “partnership that understands and appreciates the challenges the aviation industry has in complying with regulations and requirements, relative to climate change, to reduce its greenhouse gas emissions and [enact] its vision of a net-zero aviation industry.” And sustainable aviation fuel (SAF) is a key to achieving this vision.

Sustainable aviation fuel is a synthetic fuel that can be made from any of 60 different feedstocks — among them plant oils, algae, greases, fats, waste streams, alcohols, sugars, captured CO2 and other alternative feedstock sources and processes. When burned in a jet engine it provides the same power as conventional petroleum-based jet fuel with a significantly smaller carbon footprint. 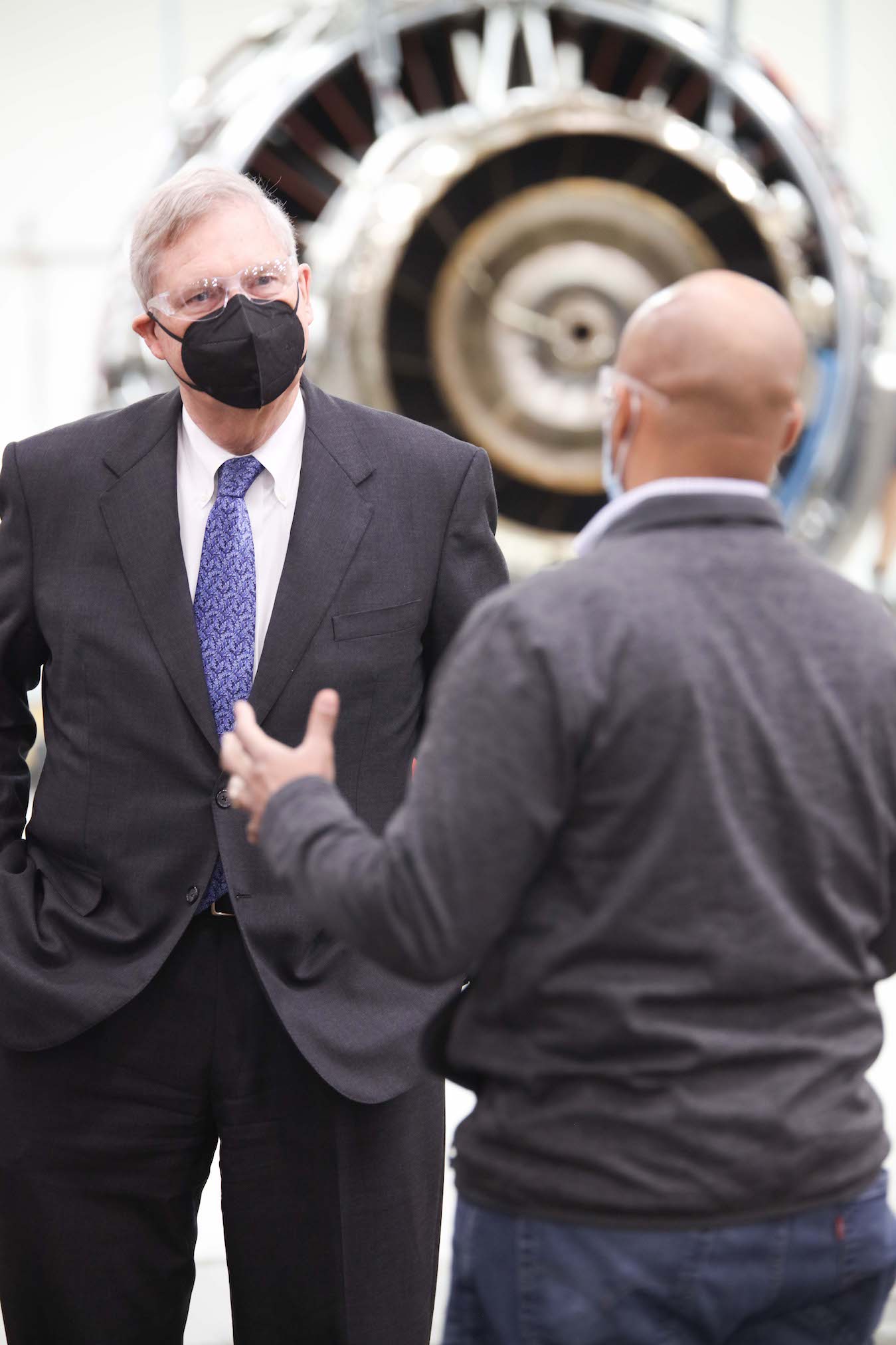 How does SAF manage to do that? “That’s where agriculture comes in,” Lorence said. Plants cultivated for agricultural purposes extract carbon dioxide from Earth’s atmosphere as they grow, just like trees and wild plants. But at the end of the growing season, the CO2 those plants stored up gets released as they decay. “If we interrupt that process and take advantage of those feedstocks and residue, we can convert that from waste or targeted crops to aviation fuel,” he said. “And that aviation fuel, with the right efficiency and scale, can be made efficient enough so that the carbon that the airplane emits is no greater than what the plants have extracted from the air to begin with.” It’s what Lorence calls a “virtuous circle.”

The Department of Energy estimates that the United States alone has the resources to produce 50 to 60 billion gallons of SAF per year. For context, commercial airlines will use about 57 billion gallons of fuel worldwide by the end of 2021, down from a peak of 95 billion gallons in 2019, according to Statista. By switching from petroleum to SAF — when you take into consideration the entire life cycle of the fuel — the aviation industry could reduce its carbon contribution from fuel by up to 80%, according to industry associations the Air Transport Action Group and the International Air Transport Association.

This was the idea behind the USDA, DOE and Department of Transportation coming together in September to announce the Sustainable Aviation Fuel Grand Challenge, which aims to work with stakeholders “to reduce costs, enhance sustainability and expand production and use of sustainable aviation fuels that achieves a minimum of a 50% reduction in life cycle GHGs [greenhouse gas emissions] compared to conventional fuel.” As Secretary Vilsack noted, the goal of the challenge is for the U.S. to be producing 3 billion gallons of SAF by 2030 and 35 billion gallons by 2050. To kick-start development and help the industry meet that goal, the DOE is providing $4 billion in grants and loans, and the Biden administration has included a tax credit in the Build Back Better bill currently being debated in Congress.

“Sustainable aviation fuel has been more expensive to produce than traditional jet fuel,” Vilsack said. “We have to reduce that cost differential.” To do that, the USDA will have to figure out what makes the best feedstock and build an extensive and efficient supply chain to get it to the producers — essentially a “farm to fuel” pipeline. The USDA already has four research centers experimenting with different feedstocks for SAF. “It isn’t just enough to produce the feedstocks,” he added, “but the way in which they are produced must also be sustainable.” 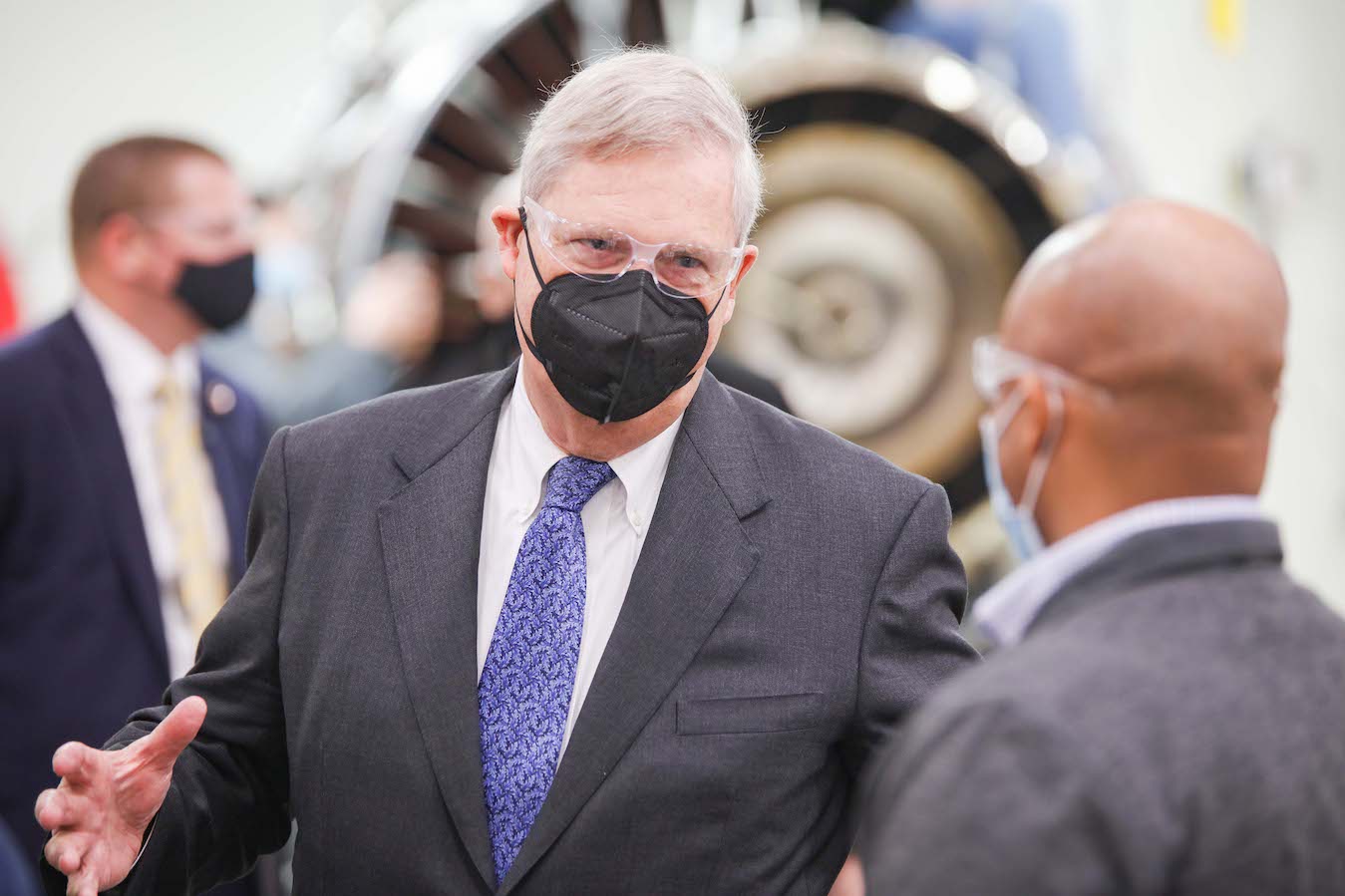 For GE, which has been actively researching SAF for more than a decade, reducing CO2 emissions from flight is paramount. In fact, GE Aviation’s SAF testing includes several industry-first flight tests powered by GE and CFM International engines: the first SAF commercial demonstration flight (2008), the first SAF transatlantic flight of a large freight commercial airplane (2011), the first 100% SAF military jet flight (2016) and, earlier this year, the first use of power-to-liquid (PtL), in which renewable electricity is used to split water into hydrogen and oxygen, and the resulting H2 is used with captured CO2 to synthesize liquid hydrocarbon fuel. (CFM International is a 50-50 joint company between GE and Safran Aircraft Engines.)

Recently they added one more to the list: In early December, a Boeing 737-8 operated by United Airlines flew from O’Hare Airport in Chicago to Reagan National Airport in Washington, D.C., the first commercial flight with passengers on board to use 100% drop-in SAF for one of the two LEAP-1B engines on the aircraft. “Drop-in” ready SAF is interchangeable with conventional Jet A and Jet A-1 fuel and requires no modifications to engines or airframes. “If you ask the pilots, they couldn’t tell the difference,” Lorence said.

GE has been researching the use of SAF with a number of customers. Recent flights operated by Etihad Airways and British Airways used a fuel mix containing SAF, and GE Aviation is also working with Emirates on plans to test 100% SAF in 2022.

“If you look at the investment that we’ve made and the progress that we’ve made as an industry, the technical challenges can be overcome,” said Lorence. When it comes to finding the best formula for SAF and ramping up production, the challenge “solely comes down to markets, availability and pricing.”

“We know that we have to continue to look for more ways for farmers to profit from what they do on the land,” said Secretary Vilsack. “And one way to do that is by converting agricultural products — agricultural waste products — into this very valuable commodity that will allow our planes to fly more environmentally friendly. It’s an exciting opportunity. We are joined in partnership with the aviation industry, and GE, to try to develop this.”