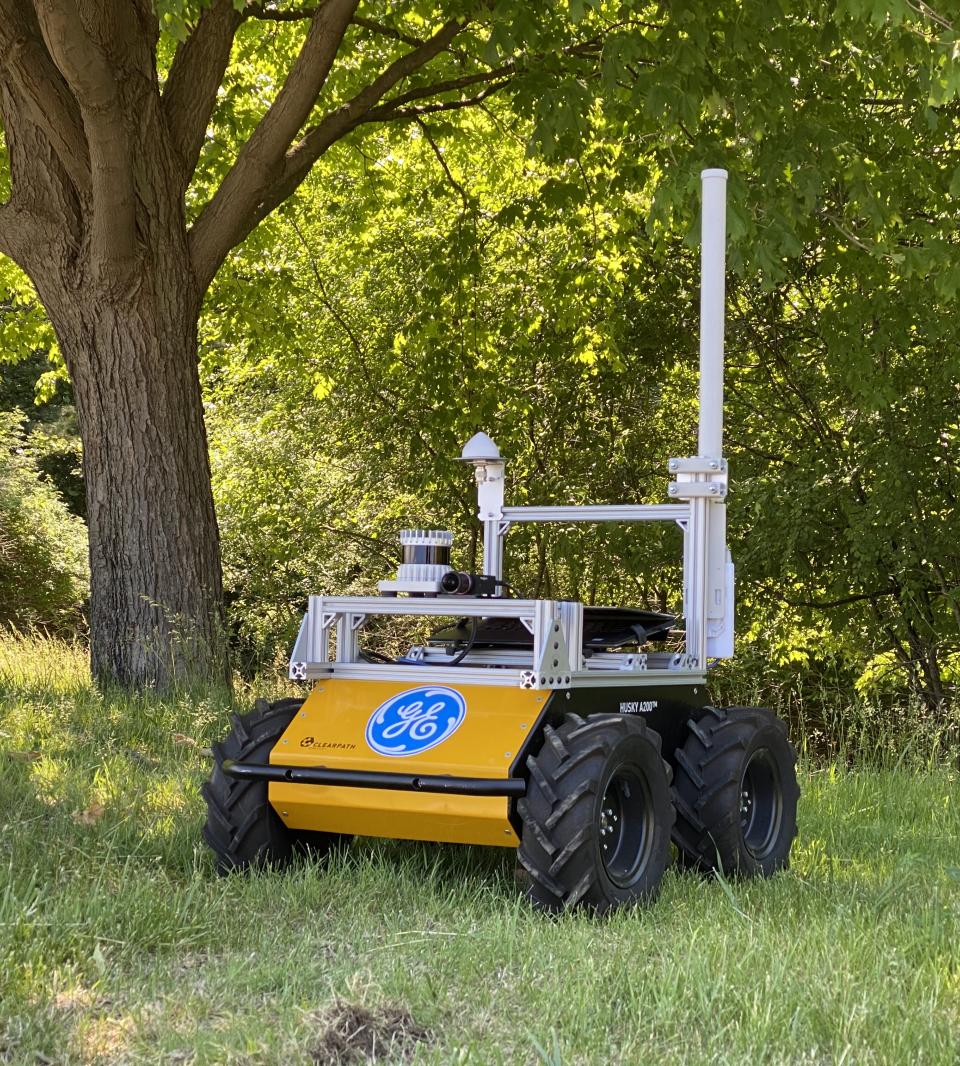 Developing artificial intelligence that can obey traffic laws while navigating a 3,000-pound vehicle through busy city streets is a complex feat, and many are stepping up to address the challenge.

But potholes notwithstanding, building an autonomous vehicle that can cross unknown, rough terrain without roads, signs or rules, all while under threat of attack from a hostile enemy? That’s a puzzle that keeps people like John Lizzi up at night. The executive director for robotics with GE Research, Lizzi and his team recently teamed up with the U.S. Army to develop a new kind of “risk-aware” autonomous technology that will help enable military ground vehicles to move more safely in complex off-road conditions. “Our warfighters find themselves in very complex environments — they’re contested, they’re dangerous, they’re unstructured and there are a lot of unknowns,” Lizzi says. “Our goal is to give them tools and teammates that better enable them to execute the mission at hand in a safer and more efficient manner.”

The project is part of the Scalable, Adaptive and Resilient Autonomy program (SARA), and one of eight being funded by the U.S. Army’s Combat Capabilities Development Command Army Research Laboratory to advance autonomous navigation. The GE Research robotics team is planning to develop AI software to allow a small, four-wheeled vehicle outfitted with cameras and sensors to travel several kilometers to a specified location through unmapped, tough terrain without roads, traffic lights or other such infrastructure — ideally without any human intervention.

This is not the first time GE Research has been asked by the military to help build a robot. In one example, another team is working on the Underminer, a tunneling automaton inspired by the earthworm. In the 1960s, GE researchers even built an AT-AT-like walking truck and a powerful exoskeleton called Hardiman.

To design the brain of the Army’s self-driving vehicle, the GE Robotics team will leverage humble AI software — a program that monitors incoming information from machines like wind turbines and draws assumptions based on that information, but also notices when certain data is missing. In essence, it is a type of AI that raises its hand when it doesn’t have all the answers — when it’s uncertain — and asks for help. GE has employed it successfully to oversee energy-generating wind turbines and improve gas turbine efficiency.

The humble AI concept will be incorporated into GE’s new Uncertainty Aware Planning System. To navigate a vehicle, the team is planning to program it to classify terrain and navigate through unknown territory by assessing the risks involved in driving certain routes. “One of the biggest challenges to achieving such a mission is how we effectively handle uncertainty,” says Shiraj Sen, the GE roboticist who’s heading the team. “The technique we are proposing is to look at uncertainty at various levels and incorporate the uncertainty information to plan out a path.” 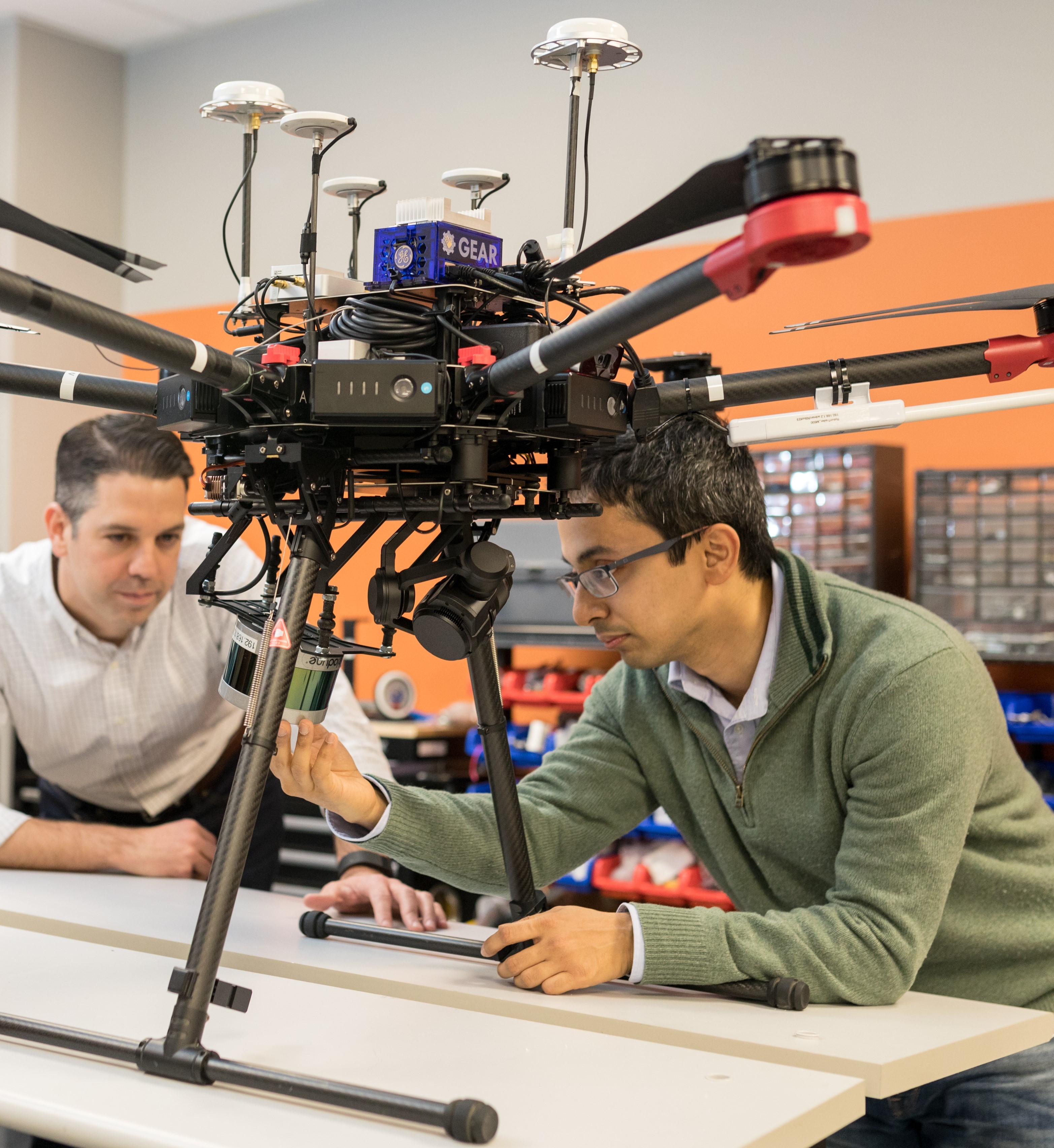 Out in the field controlling the Army’s surrogate R&D testbed vehicle — a meter-long 4x4 based on the Clearpath Robotics Husky — the system is being designed to compare imagery of the terrain it sees through the vehicle’s onboard cameras to that which it has either driven over before or has been programmed to trust, like short grass or flat ground. Should it find itself in an environment that is too hard to read, like dense brush or muddy water, or with which it has no experience, it is being designed to slow down and maneuver so that its front-facing camera can look for a different route.

But some terrain obstacles are more complicated, and the “brain” must assess their risks. For instance, humble AI can use an onboard measuring sensor to decide whether a felled tree or log is too big to drive over. Tall grass also provides a quandary — is it too high to safely navigate? These details build a risk-awareness that must become part of the AI’s programming in order for it to weigh risk quickly and choose the wisest path to its destination.

Programming machine learning software that can evaluate risk and make the correct decision is perhaps one of the most important factors in developing and trusting autonomous machines in the future, says Sen. “For autonomous systems to be truly useful, dealing with uncertainty is going to be the challenge, be it commercial — like self-driving cars — or military or industrial,” he explains. “Currently there’s a lot of hand-holding that has to be done, and humans have to be there all the time to assure that the robot is performing the task safely.”

The team is scheduled to demo the software in November at the Army’s Robotics Research Collaboration Campus at Graces Quarters in Chase, Maryland. During the display, the Army will rate the performance based on how quickly the vehicle can travel from point A to point B while navigating all by itself. Such a vehicle could be employed for reconnaissance, mapping or even supply transport, but the Army’s long-term goals are likely more ambitious, says Lizzi. “The real goal for the Army is to leverage the technology to instrument their fighting vehicles, including the RCV — robotic combat vehicles.”