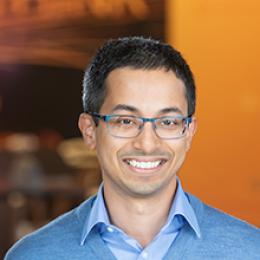 Shiraj Sen is a lead scientist at GE Research, where, as part of the GE Robotics team, he is responsible for research, development, and deployment of real-world systems for aerial and ground robots.

At GE, which he joined in 2014, Sen works closely with customers and multi-disciplinary teams to shape robotics projects and products in the oil & gas, power, and transportation sectors. His main areas of interest include robot learning, robot planning, computer vision, and certification of autonomous systems. He has been actively involved in the creation of two new robotics-enabled businesses at GE and has filed over a dozen patent disclosures.

Prior to joining GE, Sen was a postdoctoral fellow in the UMass Amherst College of Information and Computer Sciences Robotics Lab and worked with NASA to develop robotic learning techniques, including teaching robots to make decisions under uncertainty.

He recently continued his work with NASA, winning second place in the agency’s Space Robotics Challenge. The competition tasked teams with developing software to increase the autonomy of NASA's R5 robots so they can complete specific tasks during space travel or after landing on other planets.

Sen earned a B.S. in mathematics and computing from the Indian Institute of Technology at Kharagpur in 2004 and his M.S. and Ph.D. degrees in computer science from the University of Massachusetts Amherst in 2007 and 2012, respectively.