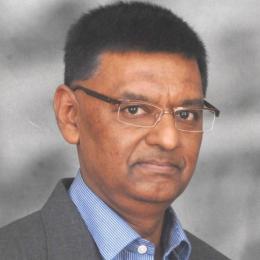 Dr.Shyamsunder obtained his Bachelors degree in Metallurgical Engg. in 1983 from the Maharaja Sayajirao University, Vadodara, India, and attended the 27th batch of BARC Training School for a one year Orientation Course Nuclear Science and Engineering at Mumbai. He worked as a Senior Scientist at the Indira Gandhi Center for Atomic Research, Kalpakkam from 1984 to 2000 in the area of R&D in Nondestructive Evaluation (NDE) and Inspection techniques aimed at improving the sensitivity and reliability of defect detection and characterization for structural integrity assessment of engineering components and structures in a wide variety of industries including nuclear, aerospace, defence, petrochemical and others.

He obtained his Ph.D from  IIT-Kharagpur in 1998 in area of applying pattern recognition techniques to NDE for better reliability and enabling automation. Since 2000, he has been working at GE Research, Bangalore where he is responsible for incubating the NDE Lab and a team at the newly formed research Centre. He has taken on several roles at GE in the last 18+ years including, Project Leader, Program leader, COE Leader, Lab Manager, Platform Leader, Quality Leader and is currently a Principal Scientist for the NDE / Inspection area. Some of his major areas of work include, Eddy current, Microwave, Terahertz NDE, Nonlinear Ultrasound, Positron Annihilation for both metallic and non-metallic materials related to the aerospace, energy, oil and gas industries primarily in the area of Damage detection, Life estimation, Residual stresses, Sensor design/optimization and Probability of Detection.

Dr.Shyamsunder is a certified Lean Six Sigma Black Belt and a Level 3 TRIZ (Theory of Inventive Problem Solving) Expert certified by MATRIZ – International TRIZ Association, Russia. He is also a certified American Society for NDT (ASNT) Level III in Eddy current, Magnetic particle Testing and Magnetic Flux Leakage testing. He has filed 10 patents and authored about 100 publications in journals, conference proceedings and books including a BIS standard and over 40 inspection procedures to his credit. He has delivered more than 50 Invited talks at National and International conferences and at various academic and research institutes. He is a regular faculty member for Lean six sigma, TRIZ, Edison Development program and several certification NDT courses and Workshops.

He was awarded the “National NDT Award in the R&D Category” in 1999 by the Indian Society for Nondestructive Testing (ISNT), the GE India’s “JRD Tata Award of Excellence for Building Reputation” in 2010 and GE Research’s Whitney Team Award in 2016.

He is a Life Fellow of ISNT, Life member of ASNT, MSI, InSIS and AMSI and currently the Chairman, National Certification Board of ISNT.