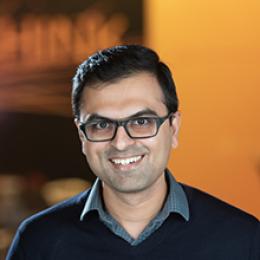 Dheeraj Kapilavai is a Lead Engineer at GE Research in Thermosciences organization. He is passionate about leveraging his expertise in the area of Combustion Physics, Gas Turbine Systems, High Performance Computing and Data Analytics to help develop energy and propulsion technologies for a fuel efficient and low carbon footprint future.

At GE, he has contributed to flagship products like the F-Class and HA series Gas Power Systems, LM6000PF+ Aeroderivative Gas Turbines, Passport 20 and GEnx Aircraft Engines. He has more than 10 years of experience in implementing and developing combustion modeling tools for high performance computing platforms both internally and through grants on national facilities. As a PI for a Compute grant on DOE's TITAN super-computing platform, he deployed a parallel computing code to achieve breakthrough combustion simulation for a gas turbine combustor.

His work on aerodynamic analysis of a novel supersonic exhaust nozzle was recognized as the AIAA 2009 Best Paper in Systems Integration. He has served as a reviewer for the Proceedings of Combustion Institute, Combustion Science and Technology, ASME Turbo Expo, Aerospace Science and Technology, ASME and AIAA conferences in his field. Dr. Kapilavai is the author of more than 10 scientific publications and reports. He has presented his work at premier conferences of AIAA and Super Computing. Dr. Kapilavai received his PhD in Mechanical Engineering in 2011 and an MS in Aeronautics and Astronautics in 2008 from Purdue University. He earned a Bachelor of Technology degree in Aerospace Engineering from the Indian Institute of Technology, Madras in 2006.