to be added to Portuguese grid

of the continuous operating range

of the total operating range 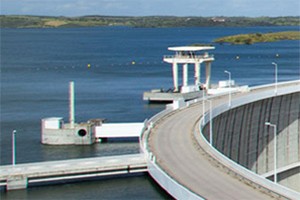 What would actually happen if a hydropower plant (HPP) failed? In Portugal, a country that now gets over half of its electricity from renewable sources, a shortfall of either of two of its biggest hydropower plants, Alqueva II and Salamonde II, would have serious consequences.

For EDP (Energias De Portugal), who operate both, the challenge is to extend the operating range of the plant equipment, while being able to improve advance planning of repairs.

They needed a solution to observe the turbines in action, without disrupting production, to measure stress damage or to test their turbines in extreme conditions. However, short of giving their HPP an X-ray, EDP could not rely on traditional methods.

Enter Big Data: GE Renewable Energy and EDP called on the power of Data to create a computer generated, digital facsimile of the runner blades at Alqueva II.

While the computer models are not fully-fledged ‘digital twins’ yet, they are well on the way. GE’s Digital Twin technology has been breaking ground in plenty of other industries such as Aviation or Healthcare.

“We used the GE computer models and digital simulation alongside some real-world measurements to see points of weakness in the system,” added Elisabeth Atheaux, Controls Product leader in GE Hydro. “We’re working on developing these digital solutions to eventually reach a point where we can provide real-time recommendations, and include the dams in a digital platform, like Predix for example.”

“This kind of technology lets us push the boundaries of what our hydropower plants are capable of,” said Filipe Duarte from EDP. “This opens the door to machine learning, where the software linked to the turbines can learn, adapt and predict. It sounds like science fiction but it is really happening now!”

Portugal launched an ambitious hydropower plan to put out a total of 7,000 MW. Digital technology will be essential, as for any other country turning to renewables, to optimize the HPP’s performance in conjunction with other intermittent renewable energy sources.