The Way Forward: How GE Engineers Are Helping Build A Path To A Renewable Future

GE is working with its national partners to test a full-size turbine blade tip made from low-cost thermoplastic skin reinforced with a 3D-printed, skeleton-like structure. Image credits: LM Wind Power.

GE has used 3D printing to make a number of parts for jet engines and gas turbines. It now wants to apply additive manufacturing to the way wind turbine blades are made. GE Renewable Energy and the U.S. Department of Energy set up a partnership earlier this year that will 3D-print turbine blade tips that could be lighter and stiffer compared to current designs, and even recyclable.

Fit to print: The last 10 to 15 meters of a wind turbine blade (the “tip”) captures as much as 40% of the wind energy that spins the generator. That’s why they are the focus of this 25-month, $6.7 million project. GE and its partners plan to print a full-size blade tip assembled from a 3D-printed, skeleton-like structure, and covered with thermoplastic skin. The GE team and its partners, the Oak Ridge National Laboratory and the National Renewable Energy Laboratory, plan to test the structural properties of one tip in a lab and expect to install another three tips on a wind turbine. GE Renewable Energy’s subsidiary LM Wind Power, which makes blades for onshore and offshore turbines, could eventually use the technology on an industrial scale.

LM Wind Power is one of the world’s largest makers of blades for wind turbines. These blades are designed to last for more than 20 years, but what happens to them when they are done spinning? Too often they end up in landfills, lined up like dinosaur bones, because viable recycling solutions are not widely available. LM Wind Power wants to change that. The company, which became carbon neutral in 2018, is working with the wind industry and recycling industry to scale up sustainable solutions for recycling blades that are already in use, while at the same time designing blades that can be more easily recycled in the future.

Group effort: Last fall, LM Wind Power’s parent company, GE Renewable Energy, partnered with Veolia North America to co-process decommissioned blades in the manufacturing of Portland cement, the most common ingredient in concrete. And in January, a group of Danish companies that includes LM Wind Power won funding from the country’s authorities for a three-year project, DecomBlades, focused on upscaling recycling technologies for decommissioned blades. GE Renewable Energy will also collaborate with Carbon Rivers, a startup at the University of Tennessee in Knoxville, and other partners to develop a system for recycling glass fiber from blade parts. And LM Wind Power is also working with its supply chain to identify opportunities “Preventing waste before it occurs is the best way to reduce our impact on the planet, and it’s simply good business,” says Hanif Mashal, vice president of engineering and technology at LM Wind Power. The company’s waste reduction in blade manufacturing has yielded more than $33 million in savings since 2016.

Lawrence Cheung, a lead mechanical engineer at GE Research, specializes in harnessing the computational firepower of modern supercomputers to create elaborate models of how the wind moves in the real world to make the most of its energy. Image credit: GE Research.

Wind’s a renewable source, of course — but that’s not the same as being unlimited, according to a fascinating new paper in Nature Energy. It finds that giant turbines at wind farms suck in so much moving air that they can cause detectable decreases in wind speeds as far as 30 miles away, giving the upwind farmer a distinct advantage over the downwind farmer and emphasizing the need for more careful planning. The realization that there’s only so much wind to go around in a given region is also fueling work at GE Research, where lead mechanical engineer Lawrence Cheung has been harnessing the power of modern supercomputers to gain an elaborate understanding of how wind works in the real world. Knowledge like that is increasingly valuable for countries and energy producers seeking the most optimal arrangement of renewable sources of energy.

Not just hot air: Cheung’s latest work can model airflow across a wind farm that spans 5,000 acres (or more than 3,780 football fields). Known as computational fluid dynamics simulations, his supercomputer models break wind farms up into hundreds of millions of individual cubic meters for a granular understanding. His goal isn’t to eliminate the wind-wake problem, but to understand the precise impact of the slower air after it passes through a turbine in different wind farm configurations. That way, the cost of reducing wind wake can be weighed against the price of building farms with more widely spaced turbines. With coordinated wind energy development, everybody win(d)s.

THE HEAT IS ON 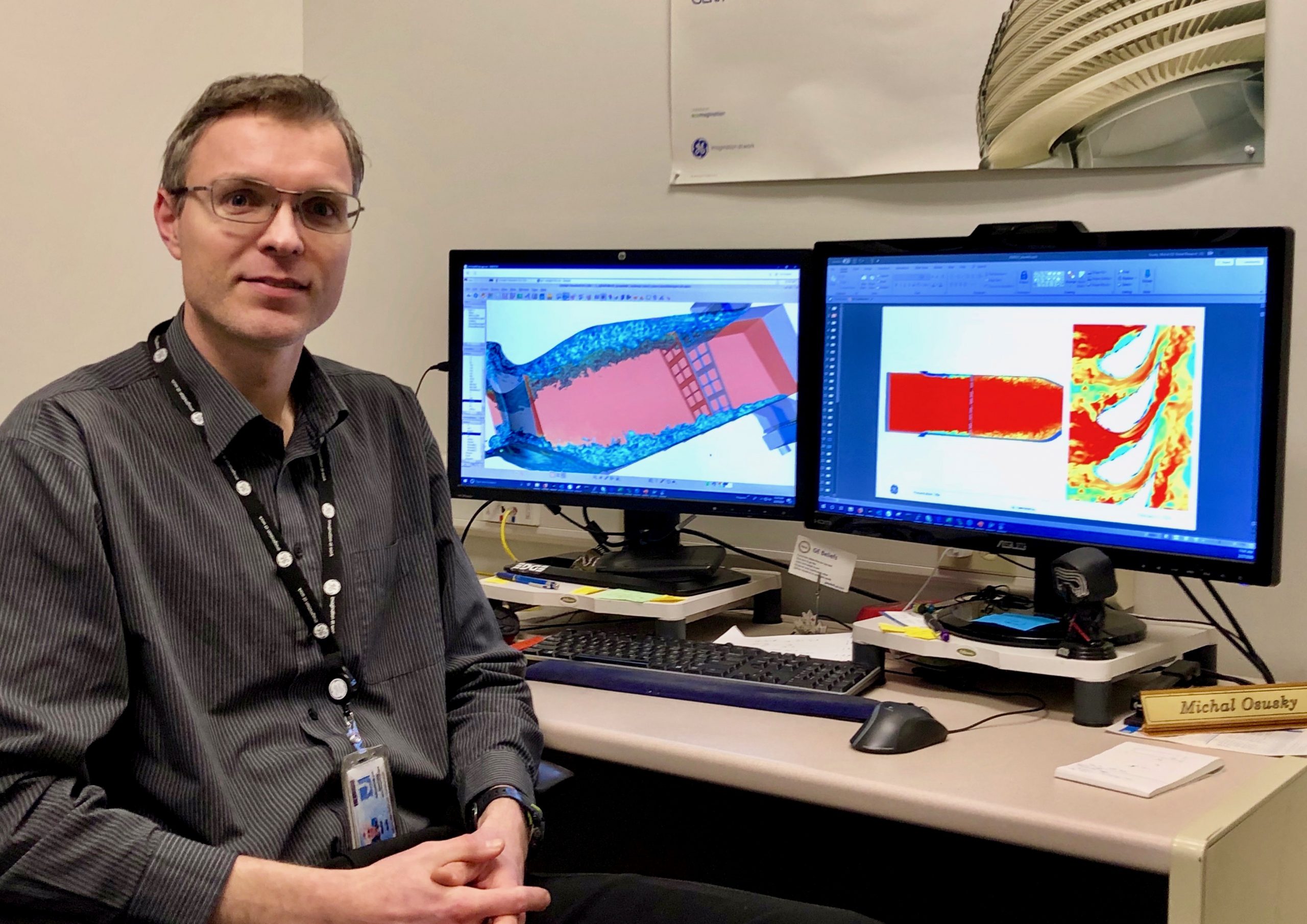 Fun fact: Engine turbines, including those in airplane engines, can run hotter than the melting point of their parts — yet the parts don’t melt. That may seem counterintuitive to most of us, but it’s all in a day’s work for engineers at GE Research, who pursue a deep understanding of how heat flows through engine turbines. Why? Because it’s a key element to a broader challenge: Given the central role turbines play in aircraft engines and electrical generation, even tiny tweaks in design could lead to enormous savings in cost and efficiency. Part of that work involves running computer simulations, said GE Research engineer Rick Arthur: “Just like biologists use microscopes or astronomers use telescopes, high-fidelity simulations empower researchers to see what they otherwise could not.” The fidelity’s about to get even higher, as GE Research has been granted the use of one of the world’s fastest supercomputers.

Sim city: That’d be Summit, housed at Oak Ridge National Laboratory in Tennessee. The supercomputer will allow the researchers to create realistic simulations of turbulent heat flows coursing through engines better than they could with older computer models of turbines, which simply couldn’t process the data fast enough. “It opens up a whole new area of predictions we never would have been able to do,” says Michal Osusky, a lead thermosciences engineer at GE Research. “It wasn’t that the methodology wasn’t there. It’s more that the computing resources weren’t there at the necessary scale.”