Global wind farm operators added more than 22,000 wind turbines in 2019 and the growth is only going to pick up speed as more and more countries continue to press ahead to lower their carbon footprint. With good reason: On average, a single wind turbine operating in the U.S. reduces emissions to the tune of 4,600 metric tons of CO2 each year, according to the Environmental Protection Agency. In 2019 alone, the electricity generated from wind turbines around the world avoided the equivalent of roughly 42 million cars’ worth of CO2 emissions.

The flip side of the wind industry’s vertiginous growth over the last three decades is that an increasing number of wind turbines are also starting to mature. Upgrading the blades to generate more electricity without enlarging the turbine footprint is a net positive. And recycling the metal parts is fairly straightforward. But removing aging blades and reconstituting them into something useful — each turbine carries three in the most typical configuration — has been a challenge. Most blades, which can weigh several tons and stretch over scores of meters, end up in landfills.

Now, however, there’s a new way to give old blades a more eco-friendly ending — one that not only recycles the material but puts it to a truly efficient use helping the cement industry dial back its own significant CO2 emissions. “It’s a very elegant solution, because it addresses several requirements for the cement production process, making it more sustainable from multiple perspectives,” says Michelle Simpson, a productivity and technology leader at GE Renewable Energy. “Firstly, it provides energy for the manufacture of cement by replacing coal. It also replaces some of the raw materials that are part of the cement recipe, such as sand and clay, that would otherwise have to be mined or sourced from other locations.”

Simpson should know. Her employer just signed a multiyear agreement with Veolia North America (VNA) to recycle blades removed from its onshore turbines in the United States during upgrades and repowering. VNA will shred the blades and blend its various components, including fiberglass and balsa wood, to create material suitable for the coproduction of Portland cement, the most common ingredient in concrete around the world.

When fed into the crucible of the cement kiln, the material could help cement manufacturers lower CO2 emissions by as much as 27% compared to the traditional manufacturing process, according to Simpson. She says the new initiative will reuse nearly 90% of the blade material by weight. More than 65% of the blade weight will replace the sand, clay and other raw materials that would otherwise be added to the kiln to create the cement. Approximately 28% of the blade weight takes over the role of coal: providing energy for the chemical reaction in the cement kiln. “The resources will now be used for something new rather than being buried in the ground,” Simpson says.

GE Renewable Energy and VNA, the U.S. and Canadian subsidiary of the French water and energy giant Veolia, anticipate they will recycle and repurpose thousands of blades through this agreement.

The agreement is a win for GE, a manufacturer of some of the world’s largest wind blades; VNA, which will process the blades to make them usable by the cement industry; and also for the cement industry, which is keen to decarbonize its operations.

A blade’s journey from the turbine tower to the cement manufacturer takes a number of steps. First, during repowering, engineers replace the old blades, which could have been spinning for up to 20 years, with longer, lighter and more efficient ones. “These longer blades, along with some other components in the drivetrain, allow the turbine to generate more electricity on the same footprint,” Simpson says.

Still, at approximately 120 feet from root to tip, the retired blades can be as long as a single wing of the Airbus A380, the world's largest passenger airliner. Workers will lower them with a crane, split them into three sections for loading onto a truck, and haul the pieces to a shredding site where powerful shredders will chomp down the large blade segments into smaller chunks. 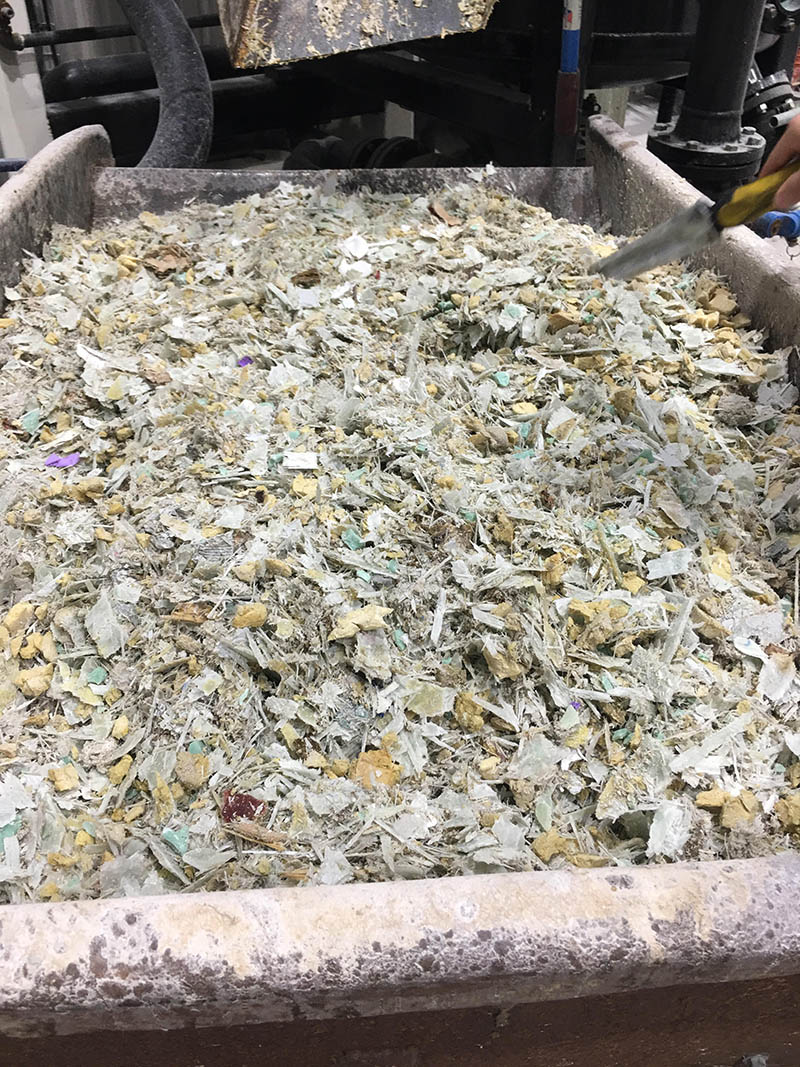 Broken down to pieces the size of a deflated football, “we can get three to four blades’ worth of that primary shredded material onto a dump truck,” says VNA Vice President Chris Howell.

The final leg of the processing journey takes the blades to Missouri, where the smaller chunks will undergo one last shred down to pebble-sized bits that cement manufacturers can mix with other material and feed into their kilns. “They need to be small and light because they are fed into the kilns by air inductor systems,” says Howell. From the time the blade is lowered to the ground to the time it is fully coprocessed at the cement plant will be just a matter of weeks, once operations are fully lined out.

So, how do tiny chunks of wind turbine blade translate into cement with less of an environmental impact? It has to do with the source material. A portion of the shredded blade that provides energy for the chemical reaction in the cement kiln consists of biogenic matter — that is, material derived from living organisms, in this case the balsa wood and some of the resins in the blade. Because that biogenic matter absorbed CO2 through photosynthesis during its lifetime, it has already offset the emissions, even before being burned. It’s the same principle by which biomass, the organic material from plants that humans burn as a power source, is categorized as renewable energy. (This doesn’t apply to fossil fuels such as coal, explains Howell, mainly because it takes millions of years for coal to form inside the earth.) “There is a strong push from the cement industry to look at these biogenic alternatives,” he adds.

The inorganic materials that make up 65% of the blade weight will also help to lower the cement industry’s emissions. The glass fiber in the blade contains silica, which replaces one of the crucial ingredients of cement: sand. Blade fragments also contain calcium oxide, which combines with other industrial minerals to form alite, the compound in Portland cement that helps it to set. In a traditional cement manufacturing process, calcium oxide (CaO) is generated by decomposing calcium carbonate (CaCO3, which is also known as limestone) at very high temperatures — above 1,500 F — resulting in CaO for the cement but also CO2 that is emitted into the air. By using the blade material in the cement manufacturing process, some of that CO2 generation is avoided because the blades contain calcium oxide. “The silica and other minerals would otherwise have to be sourced or mined from outside of the cement manufacturing industry, which involves emissions,” Howell says.

An environmental impact analysis conducted by Quantis U.S., a sustainability consulting group, has found that recycling a single 7-ton blade in this way enables the cement kiln to avoid consuming nearly 5 tons of coal, 2.7 tons of silica, 1.9 tons of limestone, and nearly a ton of additional mineral-based raw materials.

The cement project will begin in the United States but it has potential in any region of the world. “It will work anywhere they make cement, which is pretty much everywhere,” Simpson says. And onshore wind turbine blades represent just one part of the potential market. “Coprocessing would obviously work for decommissioned offshore blades too, but that market sector is still relatively young,” Howell says. Other fiberglass-rich components such as airplane wings, boat hulls and car bumpers could also be coprocessed in cement manufacturing, he adds.

The blade fragments’ transformative journey could also have a fitting epilogue. “They might end up as concrete used in the foundation of a wind turbine,” says Howell. “That would be a kind of ‘Shangri-La’ moment in terms of the circularity of this initiative.”