Break It Down: This Big Wind Industry Player Is Seeking To Make Future Turbine Blades 100% Recyclable

It should come as no surprise that wind has one of the energy industry’s lowest carbon footprints. But that doesn’t mean it can’t be even smaller — and one promising avenue involves recycling wind turbine blades. “There are huge sustainability advances in terms of energy, materials and consumption at every stage,” says Hanif Mashal, vice president of engineering and technology at LM Wind Power. In fact, the Danish company, a subsidiary of GE Renewable Energy, is seeking to find ways to make blades that could be 100% recyclable one day.

LM Wind Power is one of the largest makers of wind turbine blades. Its factories around the world produce annually some 14,000 blades for turbines that are capable of generating power in excess of 9 gigawatts, enough to supply more than 11 million European households. The smallest blades weigh around 12 tons; the largest — for GE’s Haliade-X offshore wind turbine platform — stretches 107 meters from end to end and weighs 50 tons each. “These rotors are the wind turbine motors,” Mashal says. “They involve plenty of labor, polymer-rich composite materials and heat to build, as well as a lot of effort and energy to transport and install.”

The company has been shrinking its carbon footprint for a while, becoming carbon neutral in 2018, achieving a zero-emissions carbon footprint for its operations by balancing its emissions with reductions through improved energy efficiency, the use of renewable energy and the purchase of carbon offsets. Mashal believes that finding ways to recycle wind blades — which are designed to be used for more than 20 years — is the logical next step. “We now want the whole value chain to be sustainable, well beyond the area of our operational control,” he says. 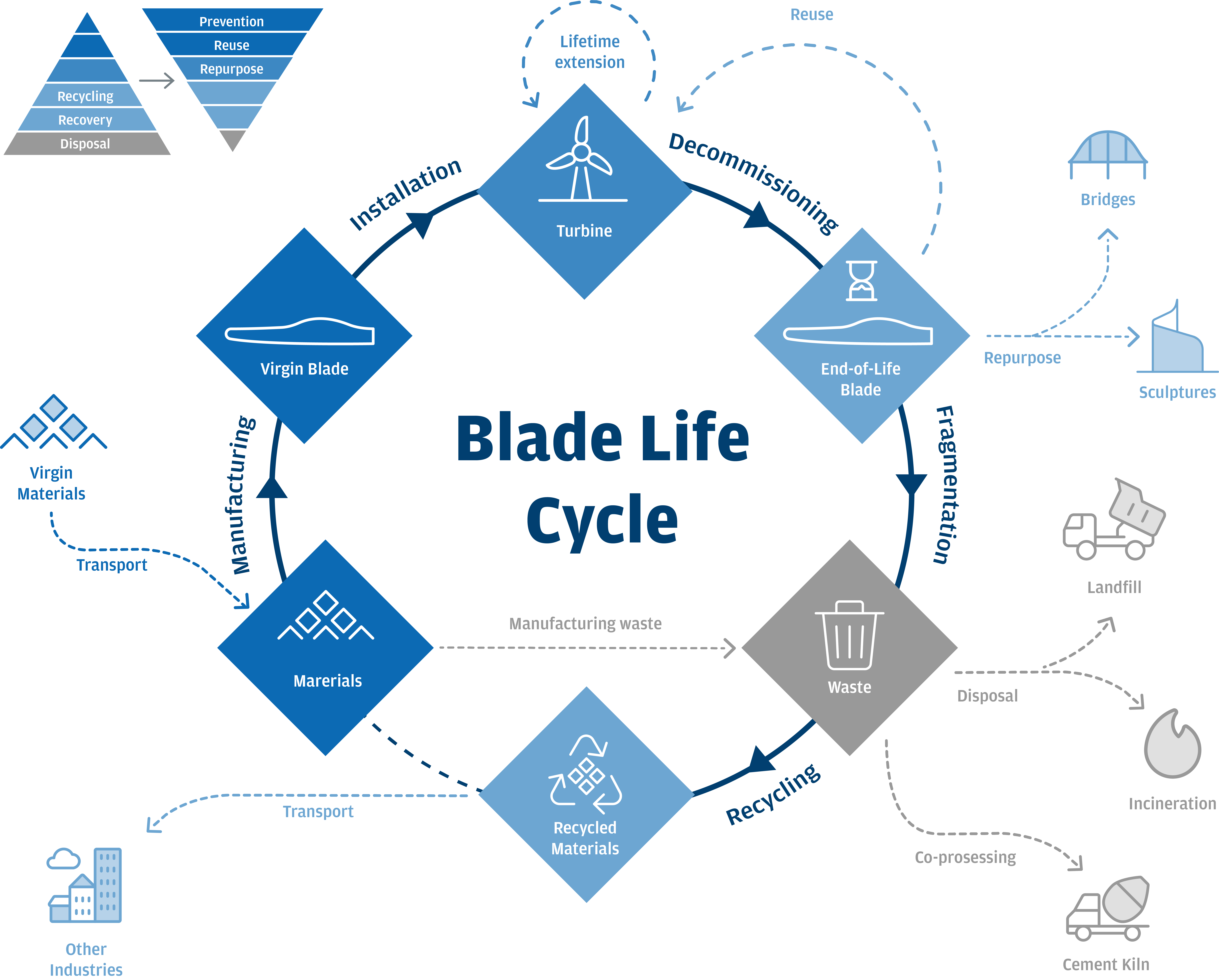 But that’s not simple. Unlike steel turbine towers and generators, the long blades are made of fiberglass, polymers and core material, all bonded together with a thermoset adhesive. “They’re not easy objects to recycle in a sustainable and cost-efficient way,” Mashal says.

In the past, most decommissioned blades typically ended up lined up like dinosaur bones in landfills. “I don’t like that at all,” Mashal says. Some projects also tried to repurpose blades as bridges, sculptures and playgrounds

But LM Wind Power is thinking bigger. Last fall its parent company, GE Renewable Energy, partnered with Veolia North America to co-process blades in the manufacturing of Portland cement, the most common ingredient in concrete around the world. And in January, a group of Danish companies that includes LM Wind Power won funding from the country’s authorities for a three-year project, DecomBlades. The project will look at the establishment of viable recycling value chains by different recycling technologies. “The wind power industry is committed to finding a sustainable way to dispose of these decommissioned wind turbine blades with respect to the environment, health and safety of workers, energy consumption and cost, and we simply don’t yet have solutions that meet all those criteria,” says John Korsgaard, senior director of engineering excellence at LM Wind Power who chairs DecomBlades’ steering committee. 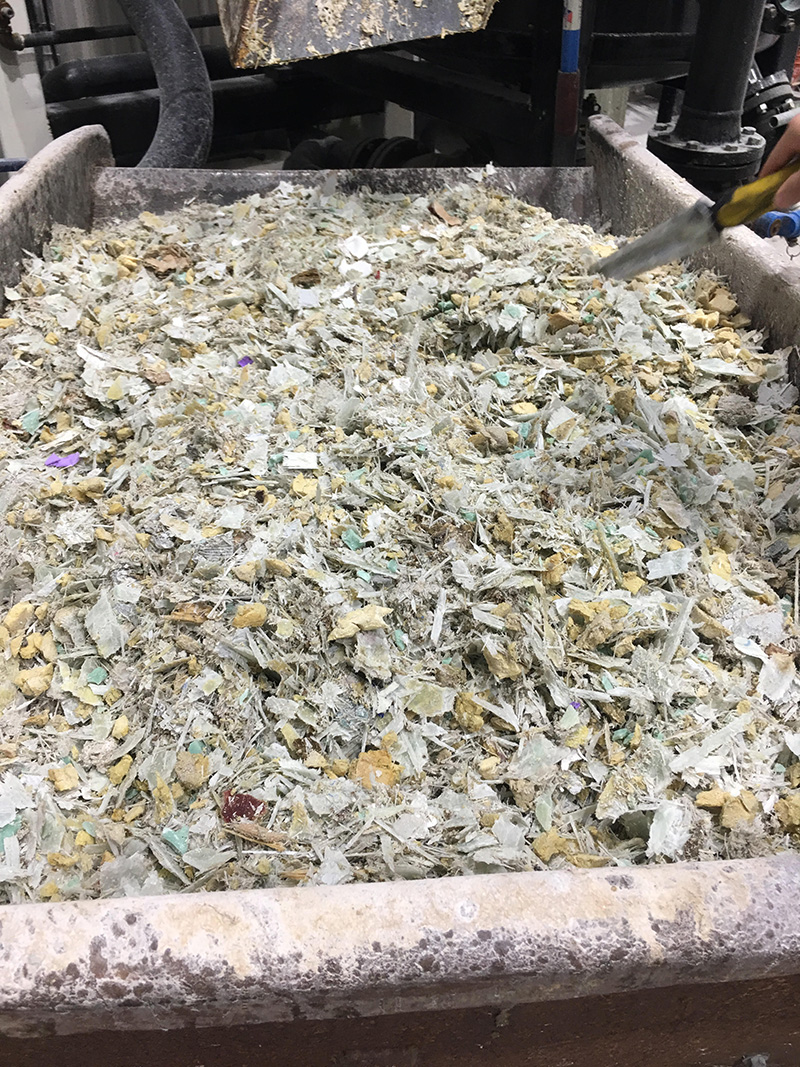 During the next two years, GE Renewable Energy will also collaborate with Carbon Rivers, a startup at the University of Tennessee in Knoxville, and other partners to develop a system for recycling glass fiber from blade parts. The focus will be on pyrolysis — a way to break down materials by exposing them to very high heat. If successful, the collaboration could result in a wind blade waste processing plant that would supply the recovered glass fibers to other industries. “The fibers might even end up in a surfboard,” Mashal says.

In an industry that seeks to be truly sustainable throughout the product life cycle, establishing these end-of-life blade recycling solutions will be essential. But when it comes to eliminating the waste of valuable natural resources, recycling is still only one piece of the puzzle. In the life cycle of a wind turbine blade, the blade’s end-of-life represents only about 1% of its total lifetime CO2 emissions. In contrast, about 70% of the emissions from the life cycle of a blade occur in its supply chain, during resource extraction.

The most direct ways LM Wind Power could impact the emissions from the total life cycle of the blades it produces will involve working with suppliers to source materials to the exact sizes needed, switching to recycled materials instead of virgin materials, and reducing production waste through lean operations. “Preventing waste before it occurs is the best way to reduce our impact on the planet, and it’s simply good business,” Mashal says. The company’s waste reduction in blade manufacturing has yielded more than $33 million in savings since 2016.

Finding efficiencies in the way it sources materials and operates factories can go a long way to reduce waste, but these efforts alone won’t bring the waste to the target, zero. New, innovative materials, designs and processes are needed to close the gap. That’s why, in part, LM Wind Power joined another consortium last year that will manufacture two prototype blades using a special resin, produced by French chemicals giant Arkema. The project, ZEBRA (Zero wastE Blade ReseArch), will test and validate the behavior of the blade made with the resin and its feasibility for industrial production.

The consortium project represents a major effort by the industry to improve recycling. “From the get-go, we will be using materials that are already designed to be recycled,” he says. “To make a business case for recycling, you need more volume and more predictability, so the big players getting together is good news.”

Introducing materials designed to be recycled, as well as already recycled materials into the manufacturing process, is part of the strategy for fully sustainable blades. While LM Wind Power is trying to close the circle on the blade life cycle, it is also already focusing on the next lap. As of last year, about 50% of the materials used to make the cores in its blades consist of recycled plastic.

“We have the vision to create a less wasteful world, and our products support that,” Korsgaard says. “But we must also look inwards and embrace this fully.”

Their success would be good for LM Wind Power, and also for our planet.