How Cool Is This: Superconducting Generators Aim To Unlock More Offshore Wind Power At Lower Cost

In 1911, Dutch physicist Heike Kamerlingh Onnes made a very cool discovery. Electrons usually lose energy as they careen through an electrical conductor, but he noticed something funny happen in a mercury wire at temperatures approaching absolute zero — minus 459 degrees Fahrenheit: The electrons met no resistance and the current flowed unimpeded, with no energy losses. Decades later, that phenomenon — called superconductivity — would prove handy in a host of applications, from speedy computer chips to magnetic resonance imaging (MRI) scanners that can help detect conditions like cancer and strokes.

Now things are getting even cooler at GE Research in Niskayuna, New York. Engineers are looking to take Kamerlingh Onnes’ work to new heights, literally. They are seeking to incorporate superconducting magnets in powerful offshore wind turbine generators that convert strong sea winds into electric power for use onshore. Backed by a $20.3 million contract from the Department of Energy, the GE team aims to lower overall wind energy costs, simplify the turbine-manufacturing supply chain and support DOE’s goal of nearly tripling wind power’s role in U.S. energy production — to 20% — over the next decade.

People have known that electricity and magnetism are closely connected ever since scientists like Michael Faraday started building the first electric motors and generators 200 years ago. Faraday proved that electrical energy could be transformed into mechanical energy by running an electric current through a magnetic field. The same principle also works in reverse, allowing spinning rotors to produce electricity.

One way to create more electricity from the wind is by building larger turbines with bigger magnets that can generate stronger electromagnetic fields. Last year, GE’s Haliade-X pumped out a record 312 megawatt-hours in a single day, enough to light as many as 30,000 homes in Rotterdam, Netherlands. But the economics of building and maintaining even larger turbines eventually starts running into headwinds. “You can stick with the same old permanent magnets, but that means bigger and bigger generators, blades and everything that goes along with that,” says David Torrey, senior principal engineer at GE Research and project leader on the superconducting generator project. “At some point, you’ll be limited by size.”

Size isn’t the only constraint with conventional permanent-magnet generators. Those magnets are made from rare earth elements —such as neodymium and dysprosium — presenting a potential choke point in the supply chain. “DOE is extremely excited about eliminating the rare earth content and customers also want greener turbines,” Torrey says. 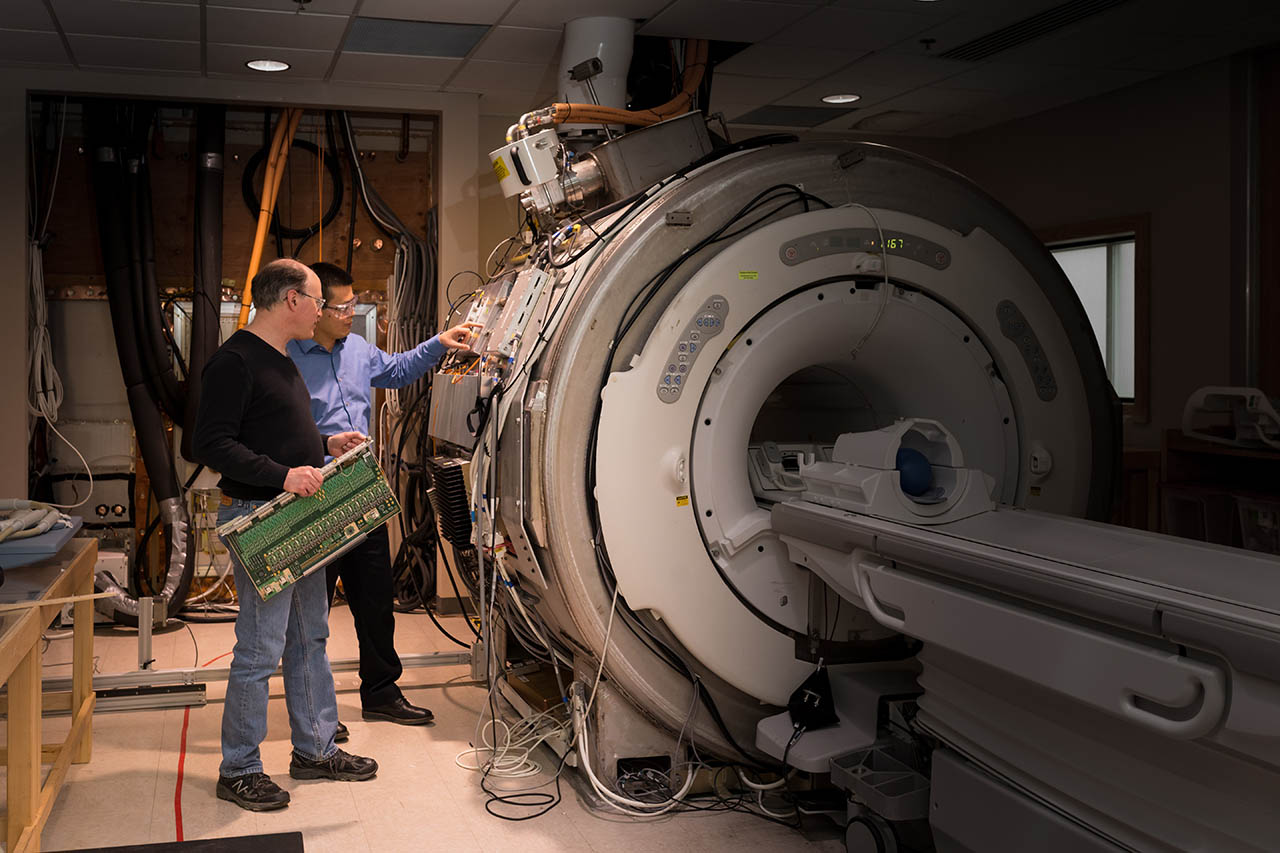 Superconductors are familiar territory at GE. They play a crucial role in modern MRI scanners, which researchers like GE’s John Schenck helped develop and GE engineer Walter Robb helped bring to market in the 1980s. Without the superconducting coils, the scanner would draw too much electricity to create the magnetic field that helps construct the images. (GE Research’s MRI team has pushed the development of superconducting magnets to boost the strength of their magnetic fields while minimizing footprint and weight. They are currently at work on a head-only scanner that could be strong enough, perhaps, to shed more light on the microstructure of the brain and how information flows between functional groups of neurons in the brain.)

The new wind turbine generator research promises more power in a smaller, lighter package using coils of superconducting wire — made from an alloy of titanium and niobium (commonly used in steel) — to produce the magnetic field. The current density in a superconducting coil is up to 100 times greater than in a normally conducting material like copper. Result: a stronger field and lower energy losses.

“Ideally you want to work with as large a magnetic field as possible, so your generator requires less current to make the same amount of power,” Torrey says. That additional efficiency could reduce a wind farm’s levelized cost of energy — the total cost of ownership divided by the total energy produced. But how to keep the coils cold enough to stay superconductive and maintain the magnetic field?

The engineers had some decisions to make. Charging the coils with a separate power supply could work; however, drawing extra power would offset some of the gains from getting rid of the magnets and extra steel used to guide the field. Instead, the GE team chose to charge the coils once and lock in the current. With no resistance in the coils, those electrons would keep flowing as long as the coils stayed cold. “If something were to go wrong, the field would need to get recharged, but this can be done with a portable power supply,” Torrey says.

Keeping the coils in their superconductive state took some imagination, too. In a conventional turbine, the blades spin a shaft holding a magnet array that induces voltage in a set of stationary copper windings. In GE’s new design, the voltage-producing copper coils are spinning within an outer ring of stationary superconducting coils that generate the strong magnetic field. This setup adheres to the laws of induction while avoiding the formidable challenge of keeping spinning coils cold. As for the cooling apparatus itself, each generator will need eight refrigerators called cryocoolers, versus just one for an MRI scanner.

Torrey and his team believe they will produce a working prototype of a superconducting wind turbine generator by mid-2023. “We’ll build one, test it and do a technology bake-off between a superconducting generator and a permanent-magnet generator,” he says. “If it performs well, we’ll have the basis of future generations of Haliade X wind turbines.”