Austria might be landlocked, but it has a special relationship with mountains and water. It is home to emerald-green alpine lakes fed by majestic Tyrolean glaciers, and the river that inspired that immortal waltz: “The Blue Danube.” Water was also Austria’s lifeblood ever since it started building hundreds of hydropower plants to propel the economy forward a century ago. It’s hardly a surprise that the country has even had an affectionate nickname for water: They called it “white coal.”

To belabor the point, water really does run deep here. One of the many things it moves is the country’s iconic red and white trains, one of Europe’s most electrified rail networks. The traction networks, which supply the locomotives with the electricity they need to get moving, feed off the main grid — which is based on hydro — as well as their own dedicated hydro dams. Now Austria’s main railway operator, ÖBB, is taking the system to a new level by adding variable-speed pumped hydro storage to the mix.

ÖBB is building a new project in an Alpine valley south of Salzburg — Mozart’s birthplace —that will act as a rechargeable battery for the country’s traction networks and a flexible friend for the grid. Tauernmoos, a 170-megawatt plant scheduled to come online in 2025, will have two modes of operation. When in pump mode, it will utilize low-cost surplus power from Austria’s grid to push water uphill by as much as 260 meters and store it in a lake. When in turbine mode, the water will reverse its course, run downhill through the same pump turbine and produce electricity. The power plant also will be able to dispatch that zero-carbon power to the grid to help smooth over any gaps caused by the intermittency of renewable power.

Tauernmoos is also remarkable in that a single original equipment manufacturer will deliver the entire scope of work. GE Renewable Energy is not only designing, building and installing the two 85-MW pump and turbine generator units that will be the beating heart of the project, but will also be responsible for integrating its nerve center: The power transformers and frequency converters that will help ensure smooth, flexible and synchronized electricity transfer between the pumped storage plant, traction network and grid.

It’s a world-first for a variable-speed pumped storage plant, explains Tomi Erstic, business development manager for central and eastern Europe at GE Hydro Solutions. “Normally when you deliver these machine sets, you have one supplier for each component — the turbines, the frequency converter, the generator and so on,” he says. “But GE is responsible for the integration of everything.”

GE Renewable Energy, which has the largest installed base of hydropower storage units in operation and equips more than 30% of the world’s hydro storage plants with technology, will leverage its vast global footprint for the project. Over the next few years, GE will manufacture, test and source equipment for Tauernmoos from a long list of countries. “China, India, Turkey, Austria, Switzerland, France, Brazil — all over the world,” Erstic says. This will provide huge benefits for ÖBB, he adds, because “they will only have to deal with one supplier, rather three or four for each component.”

But Tauernmoos will be much more than a nifty source of on-demand renewable power for the country’s trains. Pumped storage, which relies on heaving hundreds of millions of gallons of water uphill and then unleashing it to flow through turbines, also underpins Austria’s hopes of a 100% renewables-based grid. The country is targeting zero-carbon power generation by 2030 and it’s already well on course to meet that goal: A little over three-quarters (77%) of its electricity generation came from renewables in 2018. 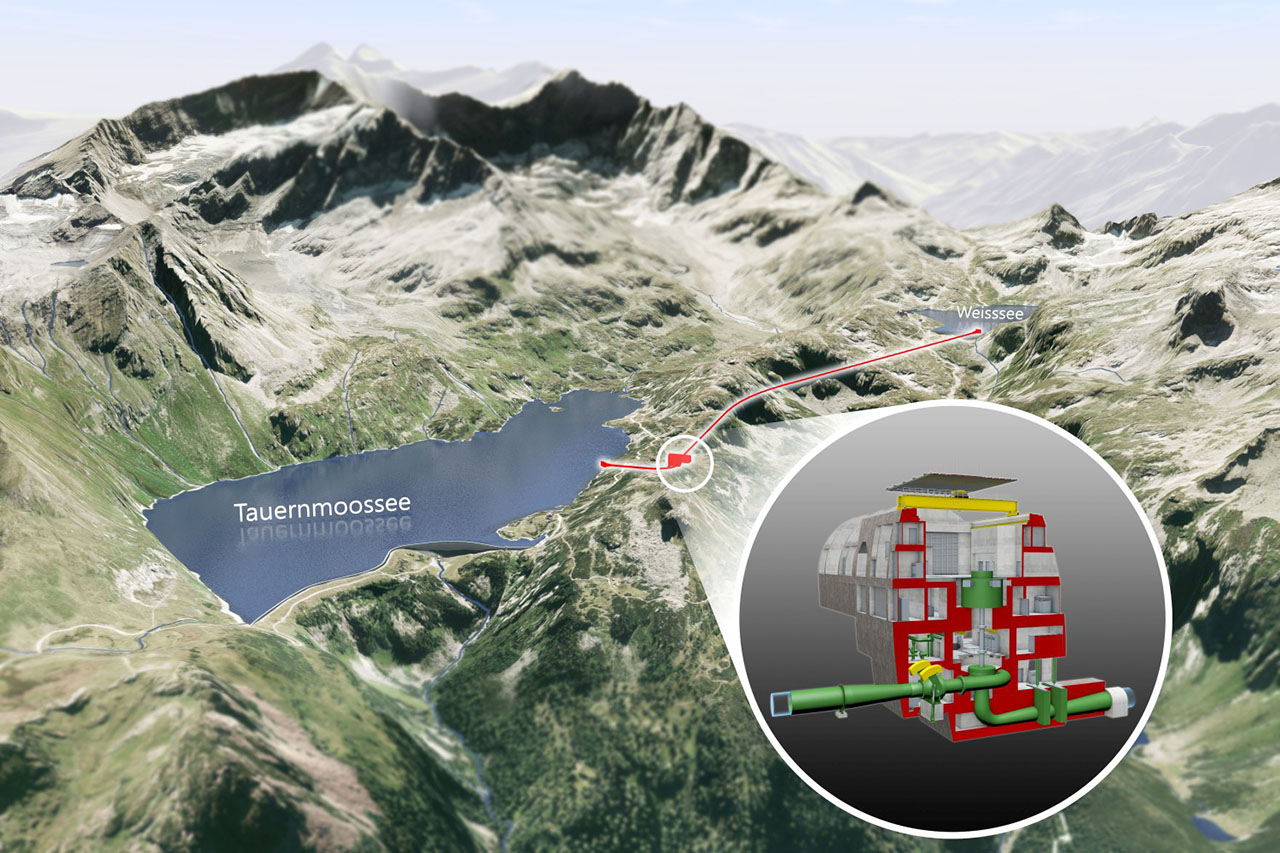 Power generation from Austria’s more than 3,000 hydropower plants fluctuates depending on rainfall, and that’s where pumped storage can step in to smooth out those bumps. When there’s plenty of precipitation, the plant can help soak up the abundant, off-peak electricity by pumping water uphill to a reservoir, turning it into a potent battery that can then dispatch energy at will. It’s a great insurance policy for the grid operator during periods of high-power demand or low rainfall. “Pumped storage is the most efficient way to store a large amount of energy, and you can control it both ways,” says Alex Schwery, chief consulting engineer at GE Renewable Energy’s Hydro Power unit. “You can control production as well as absorption.” (ÖBB itself owns eight hydropower plants and produces a third of Austria’s traction supply.)

Schwery helped design GE’s ingenious variable-speed technology that will bring even more flexibility to Austria’s traction networks and grid. That’s because the system will be able to do double duty, acting as pumps or, alternatively, as turbines, and consequently store and generate the right amount of electricity. “It will go all the way from minus-100% load,” consuming 170 MW, says Christof Gentner, a project engineering manager at GE Renewable Energy, “to a plus-100% load” generating 170 MW.

The best way to illustrate the beauty of variable-speed hydro is to contrast it with conventional, fixed-speed plants. Imagine Tauernmoos were in pump mode and received 120 MW of off-peak power from Austria’s grid. A conventional, fixed-speed plant would only be able to run one 85 MW pump whereas it can’t use the other 35 MW of grid power. But thanks to the variable speed technology, Tauernmoos would be able to modulate consumption across both pumps, ensuring that all 120 MW is put to work, says Gentner.

That technology also comes into its own when pumped storage plants are in turbine mode, generating power for the traction network or grid. Variable-speed plants can regulate dispatch from zero to 170 MW and everywhere in between. It’s like having a dimmer switch that adjusts a lamp’s brightness, rather than an on-off button.

Tauernmoos is expected to be one of the most flexible pumped hydro storage plants globally, says Pascal Radue, CEO of GE Renewable Energy’s Hydro Solutions. “It will provide system strength and inertia to the grid, and will help safeguard the security and reliability of the energy supply,” he says. “We are delighted to join forces and help ÖBB Infrastructure demonstrate the role that hydro storage solutions can play in accelerating the energy transition.”