Winds of Change: Women Are Now Calling the Shots at This Giant Turbine Blade Factory in India

The 150,000 blades spinning away on GE Renewable Energy’s onshore wind turbines might all look the same, but one has a special backstory. It rolled off a production line staffed by women. Every inventory controller, molding technician, and supervisor on the shop floor that made the component was female.

This blade was made in India, a country where women make up just 12% of workers in the manufacturing sector. A female shop floor supervisor in the South Asian nation is practically unheard of. But thanks to a groundbreaking initiative that overcame cultural challenges, the gender imbalance is rapidly changing at the giant Dabaspet plant, near Bangalore, operated by LM Wind Power, which is owned by GE Renewable Energy.

Dabaspet now boasts an army of women who specialize in each stage of blade manufacturing, from cutting and trimming the giant component to laying its innards with fiberglass, balsawood and carbon and spraying its surface with a special gel coating. About 275 women now work at Dabaspet, or 12% of the workforce. And around 20% of them have already progressed into leadership or mentorship roles, such as overseeing highly technical production techniques, implementing “lean” operations, and managing other shop floor workers.

“We’ve given these women a chance, and they have seized on every single opportunity with enthusiasm,” says Sowmya Acharya, a regional communications manager at LM Wind Power. “We’re very proud of them.”

LM Wind Power began employing women on its Indian factory floors in 2018, which was a bold step in the South Asian nation. The gender gap in India’s labor market — the difference between the percentage of men and women who work — is one of the highest in the world, at nearly 51%. The gap is even higher in its manufacturing sector. 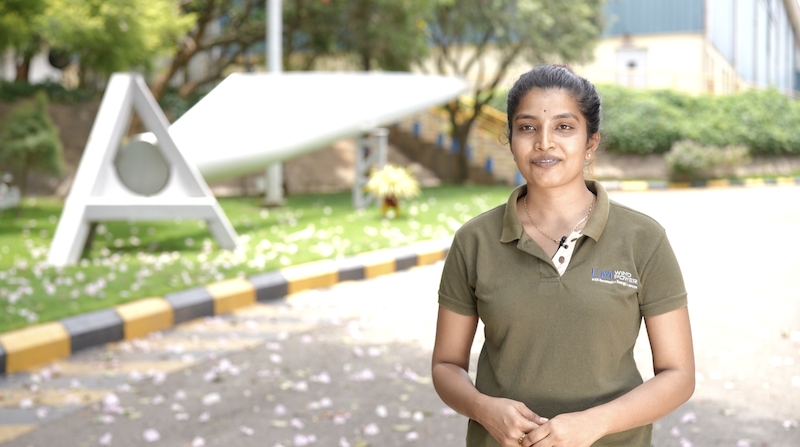 Few women worked at the 50-acre Dabaspet plant, which has produced more than 40,000 blades for GE’s onshore wind platforms since 2007. There were no female leaders to speak of.

So starting around 2015, managers began hunting for promising female candidates at the regular induction courses for new shop floor recruits. Over the next few months, they gauged their capacity and enthusiasm for learning new skills. It wasn’t long before they’d drawn up a list of around 20 women.

Then they collided with India’s glass ceiling. Some men on the Dabaspet shop floor were anxious about the initiative, particularly with regard to tradition, security, and modesty. Various husbands, fathers, and brothers of the women shared similar concerns. Even some of the women had cold feet.

Managers weren’t surprised by the objections. Indian society is slowly changing, but many people favor traditional gender roles: man as breadwinner, woman as mother and housekeeper. Some of these attitudes were deeply ingrained at the Dabaspet plant, whose workforce is drawn from rural villages to the south of Bangalore.

One concern was that women would wear factory uniforms in their new roles, instead of traditional clothing such as saris. Local families were also uncomfortable about women working night shifts. The safety of women is a major issue in India, with official statistics showing that female vulnerability has significantly increased over the past decade.

“Many men might think it’s OK for women to work in an office, but they’ve never imagined seeing their wives on a shop floor,” says Chandra Duraiswamy, senior director of communications at LM Wind Power. “Many of them will also worry about these women gaining financial independence.”

Human resource managers from LM Wind Power India decided to tackle the concerns head-on. They visited family homes in person to explain the work and respond to questions. They’d show husbands how the uniforms were essential for health and safety and reassure the women about pickup and drop-off at their doors by a fleet of company cars. Women already working on the shop floor sometimes accompanied HR managers on these home calls. “They said, ‘Hey, I am working in this plant. I work night shifts. I feel extremely safe,’” explains Acharya.

Farnaz Banu is the daughter of a local fruit seller and the first person from her family to work in a factory. Managers gave her an in-depth briefing about Dabaspet’s shop floor and different products, and a primer on the facility’s working culture. Three months later, she works alongside men on the shop floor and is an expert in applying coating layers to the tips of LM Wind Power’s 62.2-meter blades. “My team treats me like family, and I am very comfortable with them,” Banu says.

Also finding her niche is Susmita NG, who is part of a team making the 68.7-meter, two-piece blades for Sierra, GE’s new onshore wind turbine platform. Susmita is now the only woman in a 15-strong crew that specializes in grinding and “laying up,” which involves cutting materials to approximately the same size and shape as the giant molds. “At the beginning I felt uneasy, but they have all welcomed me and supported me,” she says.

Sumalatha, who works on the molding, infusion and grinding teams, explains that her family members, who all work as farmers, were initially wary of the initiative. But they’re now fully onboard. “I convinced them and made them understand about the facility, the people and safety,” she explains. Her family was particularly reassured by the pickup and drop-off service for women. “They now encourage me a lot.”

Championing women is not a new thing for GE. Earlier this year, GE Healthcare subsidiary Wipro GE opened a brand-new medical equipment factory in the Bangalore suburb of Whitefield that also made a special effort to hire women.

“It was always obvious that women could do this kind of work, just like men,” says Duraiswamy. “But we still had to conquer mindsets.”