We Have Liftoff: The First Clean-Sheet Turboprop Engine Design In 50 Years Completes First Flight In Berlin

It may feel like the end of an era in Berlin these days, with Angela Merkel stepping down as Germany’s leader after 16 years. But if you are an aviation fan, the German capital may have just witnessed the beginning of a new one.

On Thursday, a test plane powered by a GE Catalyst engine completed its first flight at an airport on the outskirts of the city, capping an important milestone for GE Aviation, its partners, and the aviation industry. That’s because the Catalyst engine is the first clean-sheet turboprop engine design for the business and general aviation market in more than a half-century. “The first flight was very successful,” said chief test pilot Sigismond Monnet. “I must say, everything went flawlessly. We actually flew longer than planned, and the engine performed as we expected.”

At 1,300 shaft horsepower, the engine includes advanced technologies that had not been tried in turboprops before. For example, it combines technology and know-how from GE’s large commercial jet engines with digital engine controls. Together, they can change how pilots fly turboprop planes and open new design options for plane-makers.

The engine seeks to deliver fuel savings and cut CO2 emissions by up to 20% compared with engines currently on the market. As sustainable aviation fuel (SAF), sometimes referred to as biofuel, becomes more widely available in the future, it will be able to run on it, and the engine could also power new types of unmanned aerial vehicles and hybrid aircraft. 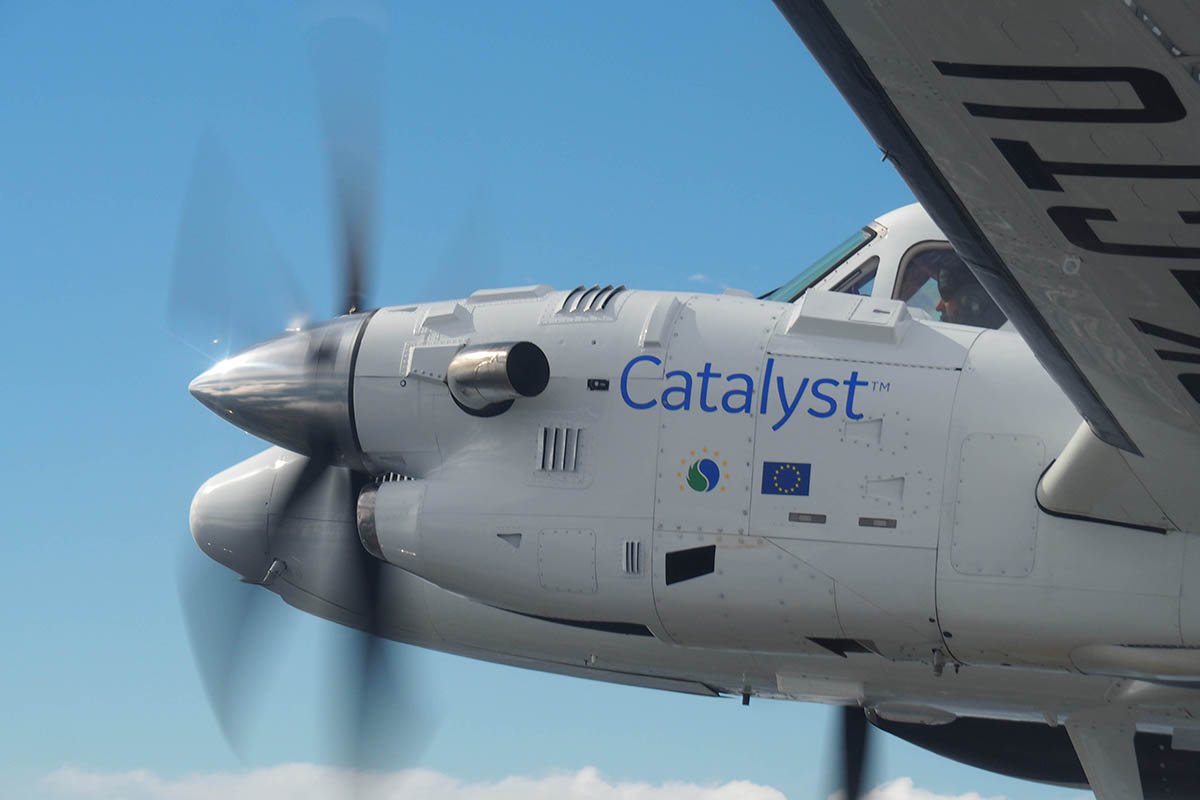 The Catalyst engine also can achieve 10% higher cruise power compared to competitors in the same size class. “In terms of technology, it really is an enabler for the aircraft manufacturer,” says Paul Corkery, general manager for turboprop engines at GE Aviation. “A lot of the decisions that we made when we started developing the engine five years ago positioned us well for the future.”

The first flight, which lasted 1 hour and 40 minutes, is an important step in the engine’s certification journey. GE Aviation has produced 16 test engines so far and they have accumulated more than 2,600 hours of operation in ground tests in the Czech Republic and Germany and completed four certification tests.

The GE unit also shipped a Catalyst engine to its launch customer, Textron Aviation, in the U.S. for the single-engine turboprop Beechcraft Denali, a brand-new plane design set to become the first aircraft to use the engine in service. “The Catalyst first flight opens a world of opportunities not only in the business and general aviation market with our launch customer at Textron Aviation, but also for defense applications like drones and trainers,” said Riccardo Procacci, CEO and general manager of Avio Aero and GE Aviation turboprop engines. He also said that it could open a new avenue for hybrid-electric aircraft designs.

About 400 GE engineers have developed the engine almost entirely in Europe, where it’s being tested and will be built. They included features like variable geometry in the Catalyst engine’s compressor, a design originally developed by GE and aviation legend Gerhard Neumann for supersonic engines. It allowed the team to increase the pressure and temperature inside the engine, burn fuel more efficiently and give it more power and speed at altitude. “More power enables the aircraft-maker to design a bigger, more comfortable cabin and build a plane that can fly fast at high altitude,” Corkery says. “Not only can I fly fast, but I also burn less fuel and emit less CO2. We know how to do it because we’ve done all of that on the big engines.”

Last year, GE made a commitment to becoming carbon neutral in its own operations by 2030. In GE’s 2020 Sustainability Report, released in early July, the company went even further, with an ambition to reach net-zero by 2050, including Scope 3 emissions from the use of sold products. GE partnered on the Catalyst with the European Union’s CleanSky initiative and its Maestro project, the largest European research program devoted to the decarbonization of aviation.

Another new feature is the “full authority digital engine control,” or FADEC, which controls both the Catalyst engine and the propeller. It consists of two fully redundant computers that process data from sensors about speed, air temperature and density, altitude and many more factors, which allows the pilot to fly the plane in an optimal way.

Jets have been using this technology for decades, but in the commercial turboprop market, “the pilot is the FADEC,” Corkery says. The Catalyst’s FADEC will allow the pilot to spend more time flying the aircraft than fine-tuning the engine’s settings. “The FADEC knows the conditions my plane is in, and it then optimizes the pitch of the propeller and the fuel flow around those conditions,” Corkery explains. “The pilot will no longer need to consult a chart to optimize the flight around the correct parameters with four separate levers. It will all be digitized. The pilot will just have a single lever. It will be like flying a jet.”

David Kimball, GE’s Catalyst program leader, also points to a future where the FADEC “not only simplifies pilot operations, but also opens the door" to emerging applications for UAVs and hybrid-electric propulsion.

Says Kimball: “We designed this engine with our Textron customer in mind, to ease the experience and increase the enjoyment of Denali’s pilots, and we’re just getting started.”