A couple decades ago, engineers from GE Aviation canvassed customers to learn what they wanted to see in an ideal jet engine. The engineers turned up a wish list of about 300 items, with one wish firmly at the top: fuel efficiency. That’s no wonder, given that fuel accounts for close to a fifth of an airline’s operating costs. Those engineers got to work — and came up with the GE9X engine. Together, the engine and the plane it was designed for, Boeing’s 777X widebody passenger jet, are 20% more efficient than their predecessor, the Boeing 777-300ER, powered by a pair of GE90 engines. Efficiency isn’t the only thing this machine has going for it, though. It’s also the most powerful jet engine in existence.

In September, the Federal Aviation Administration certified the engine — meaning that GE can start manufacturing engines for commercial service. But building the world’s largest and most powerful commercial jet engine also means having to engineer ways to transport it, test it and hang it under the wing of GE’s flying testbed.

How exactly do you hang an engine that's as wide as the body of a Boeing 737 under the wing of a Boeing 747? And what happens if the engine is too large for the state roads that lead to a test site?

Here are some of the fascinating technical challenges GE Aviation engineers had to figure out to get the world's most powerful engine certified.

With its fan coming in at more than 11 feet in diameter, the GE9X engine required a uniquely designed transporter, one that would allow the engine to be carried over the road while staying under the maximum requirements for height so that the engine didn’t clip power lines, railroad trestles and other transportation challenges. The team designed a trailer nestles down, allowing the GE9X to go across the country to Boeing’s Everett site. 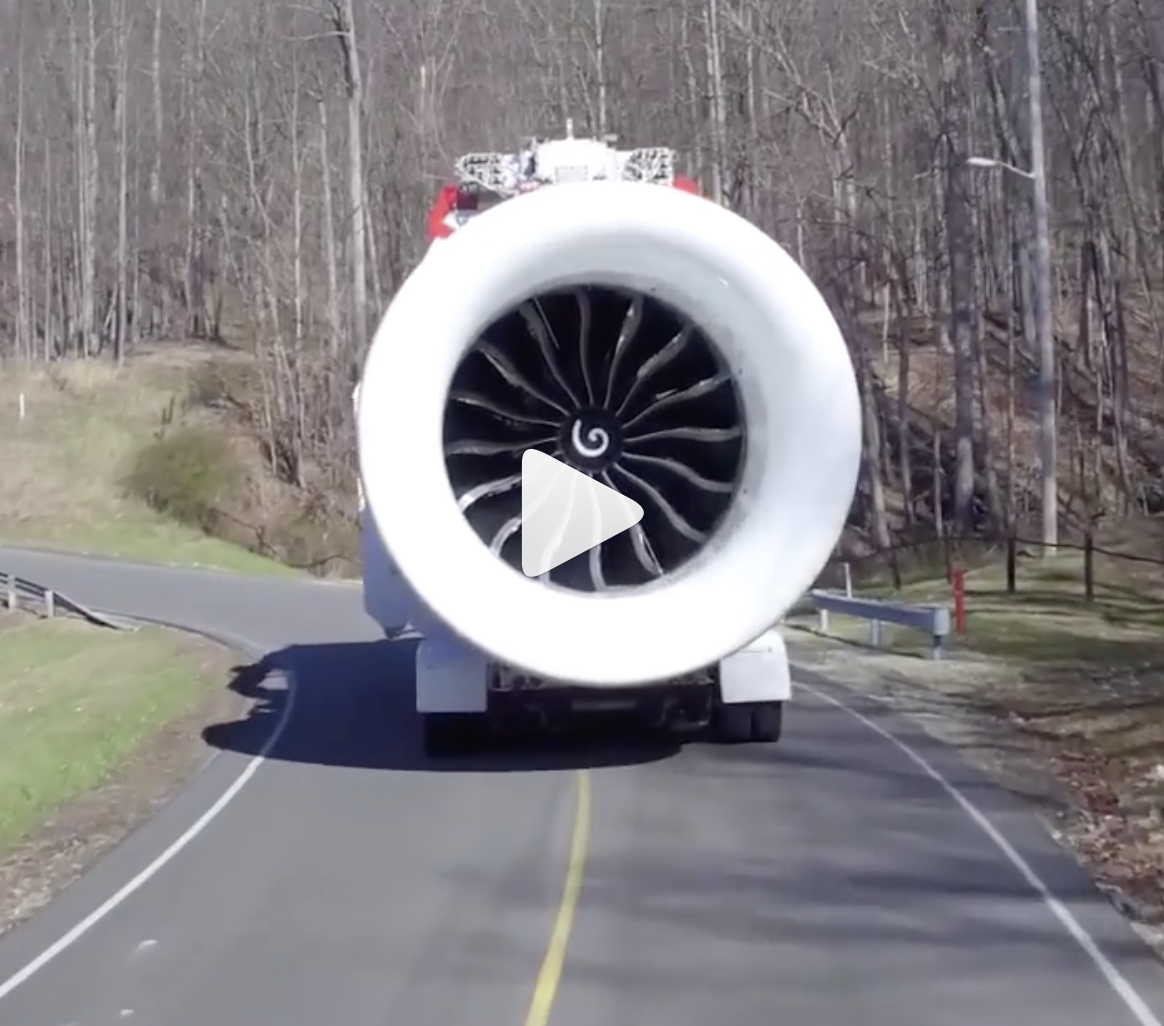 Every engine program creates its own challenges, and nowhere was that clearer than the roads around GE Aviation’s Peebles Test Operation in Peebles, Ohio, a village of fewer than 2,000 people 65 miles east of Cincinnati. Though the transportation vehicle wasn’t vastly different than one used for the GE90,  more than one GE9X engines were coming into or out of  test site at the same time. For safety reasons and to give the transport vehicles more room, Ohio State Routes 73 and 32 were widened so trucks hauling the GE9X would have  enough room for two engines to pass each other.

Though the clip above is from inside Peebles’ testing grounds, it gives you an idea of how large the engine is traveling over road.

At a whopping 18 feet in diameter and 15 feet long, the bellmouth inlet for the GE9X is the largest in the world. When it was trucked to Ohio, the highway patrol measured the shipment at a weigh station because it pushed the concept of “wide load” to a new level.

Which of these engines is not like the others? 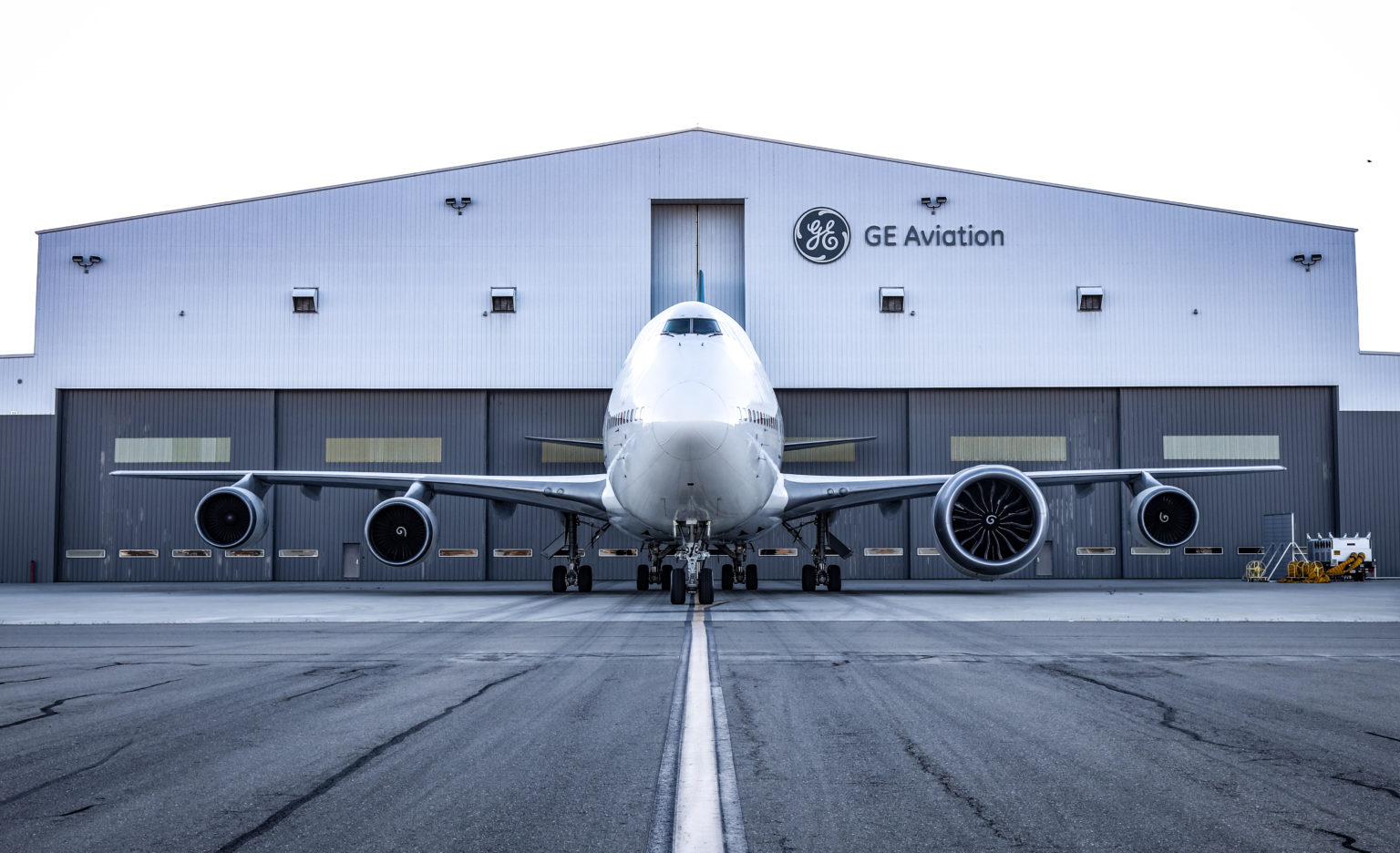 Engineers and aviation enthusiasts alike marveled at how peculiar the gigantic GE9X looked on the wing of the GE Aviation flying testbed, especially compared to the three production CF6 engines next to it. Given the 11-foot diameter of the GE9X, many also asked: How did engineers account for ground clearance?

The engine is mounted on a unique pylon that cantilevers the engine out in front of the wing and tilts it upward by approximately 7 degrees. In addition, engineers extended the landing gear struts to provide an additional 4 inches of clearance. The result is about 18 inches of clearance between the bottom of the nacelle and the ground when the test aircraft is sitting still on the tarmac.

A version of this story originally appeared on The GE Aviation Blog.