Waterworld: In The European Union, Hydropower Is The Key To A Renewable Energy Future

In September, the European Commission in Brussels proposed an ambitious new goal for renewable energy in the region: a 55% reduction in greenhouses gases by 2030 (compared to 1990 levels) to put Europe on track toward climate neutrality by 2050.

To get there, EU countries are going to have to accelerate their efforts around renewable energy. Much of that will be in the form of solar panels and wind farms (which combined account for 21% of Europe’s total power generation today). But maybe the most crucial player is going to be hydropower — renewable energy generated by gravity and water.

“Hydropower is one of the most reliable and proven sources of generating electricity, with three important attributes: It’s renewable, available on demand, and it can be used to store power,” says Pascal Radue, CEO of GE Renewable Energy’s Hydro Solutions. “This combination is the perfect complement to the growing popularity of solar and wind farms.”

Why? Remember that the sun doesn’t always shine and the wind doesn’t always blow. But energy grids need to maintain a delicate balance between supply and demand. In areas with high reliance on renewables, for example, gas-powered plants known as peakers have to be on call to maintain the balance and make sure that the grid doesn’t crash when the wind stops. In the manner of large grid-scale batteries, pumped storage hydro plants provide such balancing and grid services like those supplied by fossil plants, but with even more reactivity and in a sustainable manner without CO2 emissions. In addition, pumped storage plants soak up excess electricity by pumping water to an elevated reservoir and releasing it quickly when demand spikes.

Spinning one way, the turbine becomes a pump, sending water to a reservoir uphill. When power is needed, the water shoots down through a pipe, pulled by gravity, and spins the same turbine in the other direction, activating a generator. The design can produce energy at the drop of a hat when it’s needed and turn off when it’s not. And unlike solar and wind generation, hydro can operate regardless of the weather, day or night. “We need to have very flexible means of injecting power into or removing power from the grid to keep the lights on,” says David Havard, head of advanced offerings in GE’s hydro product management. “That’s what pumped hydro storage provides.” 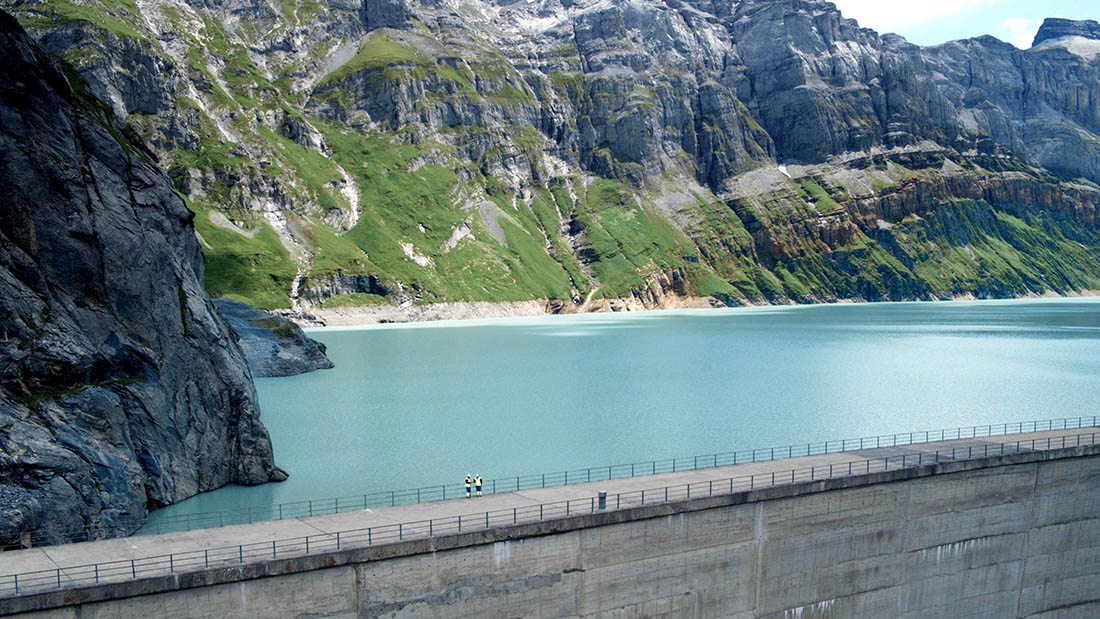 Today, hydropower facilities supply about 16% of the world’s annual electricity generation — 10% in the U.S. — with a total installed capacity of 1,300 gigawatts (GW), with nearly 16 GW being added last year. Yet, there is currently only about 158 GW of pumped hydro storage capacity at play internationally; another 40 GW is under construction. The more capacity grid operators have access to, the easier it will be for them to balance energy supply and demand as more renewables get mixed into the energy supply. “Grid operators only currently have a few options for long-duration energy storage,” says Eddie Rich, CEO of the International Hydropower Association, “and pumped storage is the only proven and affordable solution applied at scale around the globe.”

Take the example of Norway, which hopes to be a source of grid stability for its neighbors. Thanks in part to its mountainous geography, the Scandinavian nation has more than 900 hydropower plants, which provide 96% of its electricity, giving it the ability to easily address dips or spikes in power demands on its grid. Norway is able to transfer that power abroad to nearby nations in Europe. Over the next two years, the country will increase its interconnections with Europe, especially with Germany and the U.K., by large undersea electrical cables that will allow power transfers, making each country just a bit more grid-secure.

Another European region where hydro is on the rise is the Alps. In the French Alps, the Grand Maison pumped storage facility — with a capacity of 1.8 GW — is the biggest hydropower station in France and the largest pumped storage facility in Europe. It’s mainly powered by GE turbines and generators. During a blackout in November 2006, when more than 15 million European households found themselves in the dark, the dams in the Alps supplied 5,000 MW of power in 20 minutes, enough to replenish around 5 million homes. The Grand Maison power plant was mobilized, contributing largely to the stabilization of the grid. “The blackout was in danger of spreading to the whole continent,” says Havard. “The timely, massive intervention of hydro helped to stop this from happening.”

In Linthal, Switzerland, another pumped hydro storage facility, the Linth-Limmern hydropower plant, sits 2,490 meters (8,100 feet) above sea level. Its two reservoirs are separated by a 2,000-foot cliff. When the operator, the Swiss utility Axpo, wants to generate electricity, it can release up to 23 billion gallons of water and run it through four GE pump turbines that turn GE variable-speed motor-generators. At full power, the plant can churn out 1,000 MW of renewable power.

Further to the south, near the town of Finhaut, the Nant de Drance pumped storage power station’s massive generators, being built by GE, have the capacity to produce 900 MW — as much power as a small nuclear plant — in just 100 seconds.

“If we retire fossil fuel generation plants and stop building nuclear, we’re taking away a lot of synchronized and dispatchable generating plants,” says Radue. “What’s left to keep that balance on the grid? Hydro.”