Could This Be The Most Extreme Power Plant In The World?

Hidden away above the tiny Swiss Alpine town of Linthal, deep inside a snowcapped granite massif, sits Europe’s newest engineering marvel. It is a hydropower plant like no other, able to generate as much electricity as a nuclear power plant and, at the flip of a switch, act as a giant battery. “It’s the only grid-scale method of storing energy,” says Maryse François, the hydrotechnology leader at GE Renewable Energy, the company that developed the technology powering the site.

The Linthal facility is a so-called pumped-storage power plant. It generates or stores electricity by moving water between two teal-colored mountain lakes separated by a 630-meter cliff (2,000 feet) twice the height of the Eiffel Tower. When the operator, the Swiss utility Axpo, wants to generate electricity, it opens massive steel valves that can withstand titanic pressures and lets the water run down from Lake Mutt, located at 2,490 meters (8,100 feet) above sea level, to Lake Limmern, filling up a deep, dammed valley below with nearly 23 billion gallons of water (92 million cubic meters). The water runs through four GE pump turbines that turn GE variable-speed motor generators, converting the potential energy in all that falling water into electricity.

But if demand for power drops, the plant reverses the flow, pumping water back up to Lake Mutt. “It’s as if the system was recharging the upper reservoir,” François says. The system “becomes a giant natural battery, ready to be used again when needed.”

To be sure, pumped storage is not a new idea. But the Linthal plant, the first place where GE installed the variable-speed technology, is different. The technology allows Axpo to fine-tune the plant, precisely monitor the amount of excess electricity in the grid and move just the right amount in just the right direction. The technology's overall cycle efficiency —  the ratio between the electricity supplied by “turbining” the water as it runs downhill and the energy used to pump it uphill — is as high as 80 percent. “This is as much a power-generation play as it is an economic play,” François says.

The power plant will produce 1 gigawatt of renewable electricity when all four of the motor-generators come online — enough to supply 1 million Swiss homes at peak power. 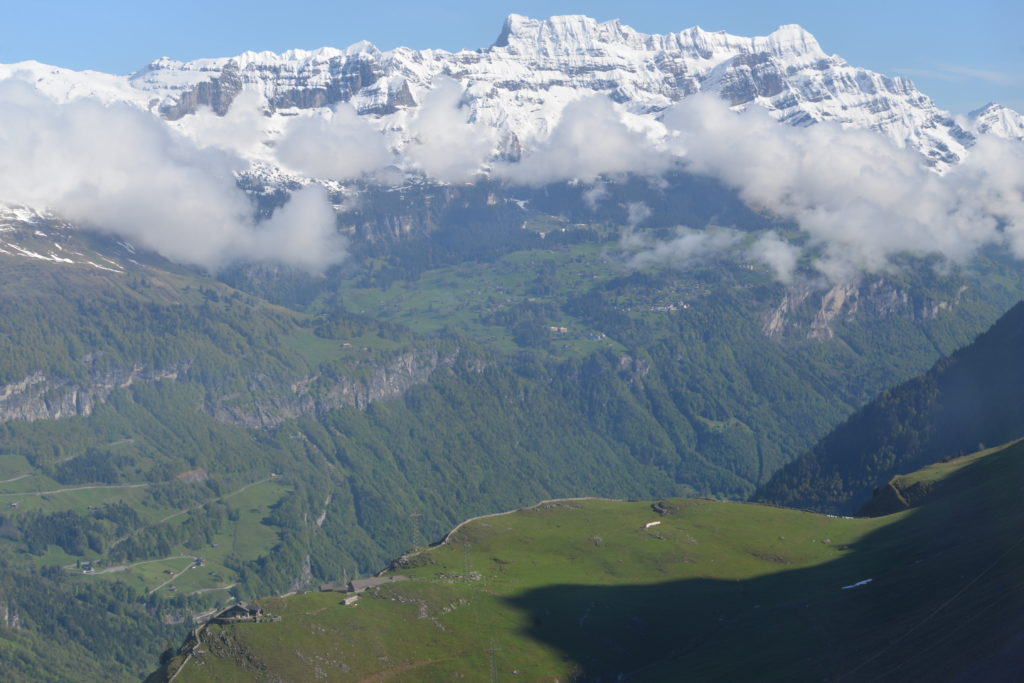 Above and below: To get to the plant, workers use a cable car to cover the first 1,000 meters (3,280 feet) in elevation. Image credit: GE Reports/Eric Lenoir 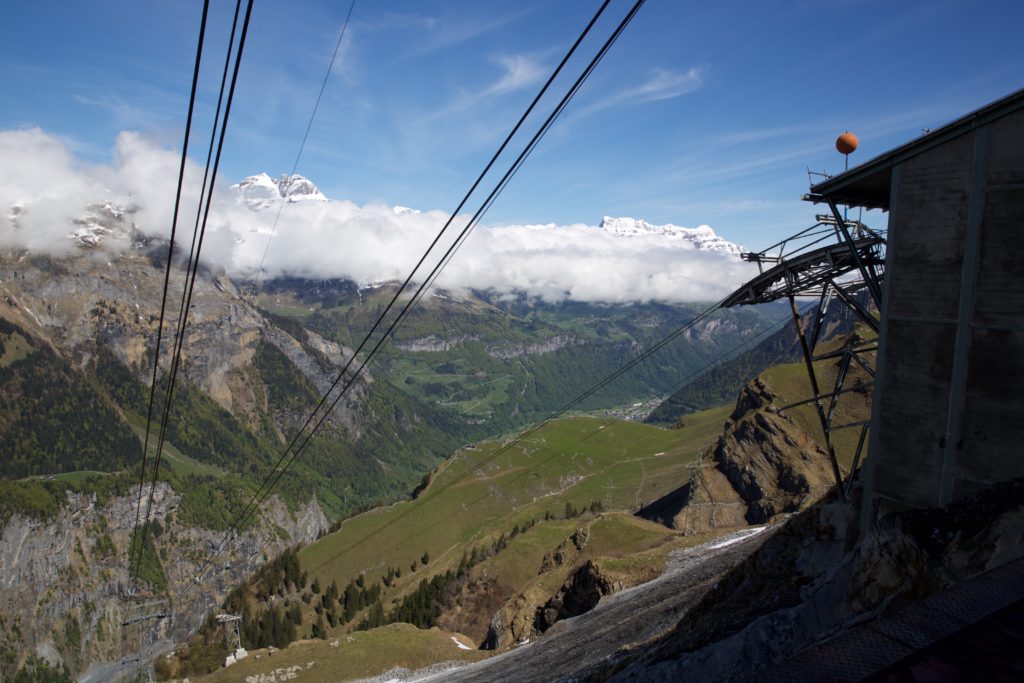 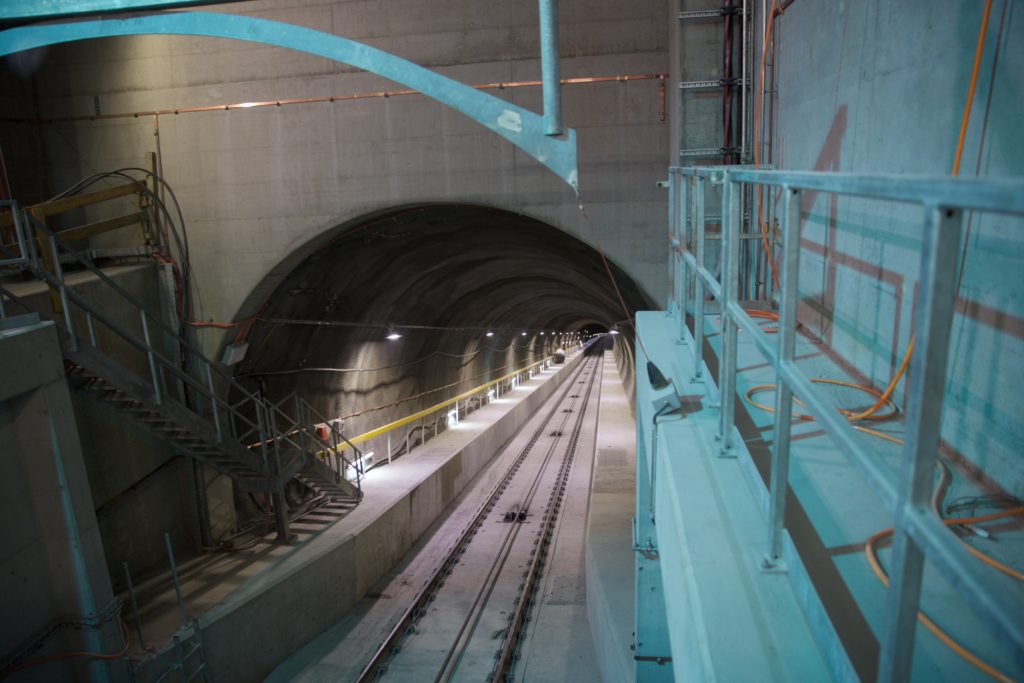 They can also ride an underground funicular. It's essentially a subway line several kilometers long running from the bottom of the mountain to the power plant. Image credit: GE Reports/Tomas Kellner

Very few people will ever get to see the Linthal plant. To get there, you first zip down the autobahn. Then, as the Alpine peaks towering on either side of your car tighten their grip, you proceed along a series of increasingly narrow, winding roads. The last stretch, from the little town of Linthal itself, ends at a wall of rock. Here, climb inside a cable car that rises above meadows sprinkled with grazing herds of Alpine ibex. (No sign of Julie Andrews.) The cable car drops you off at the mouth of a tunnel. You are now roughly 1,800 meters (5,900 feet) above sea level. 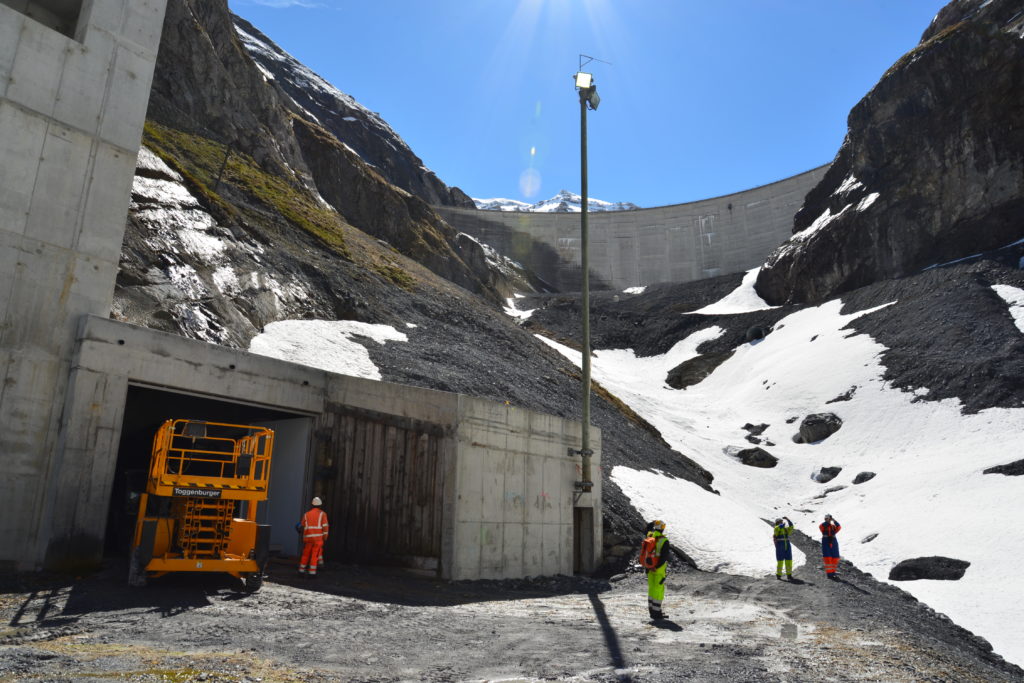 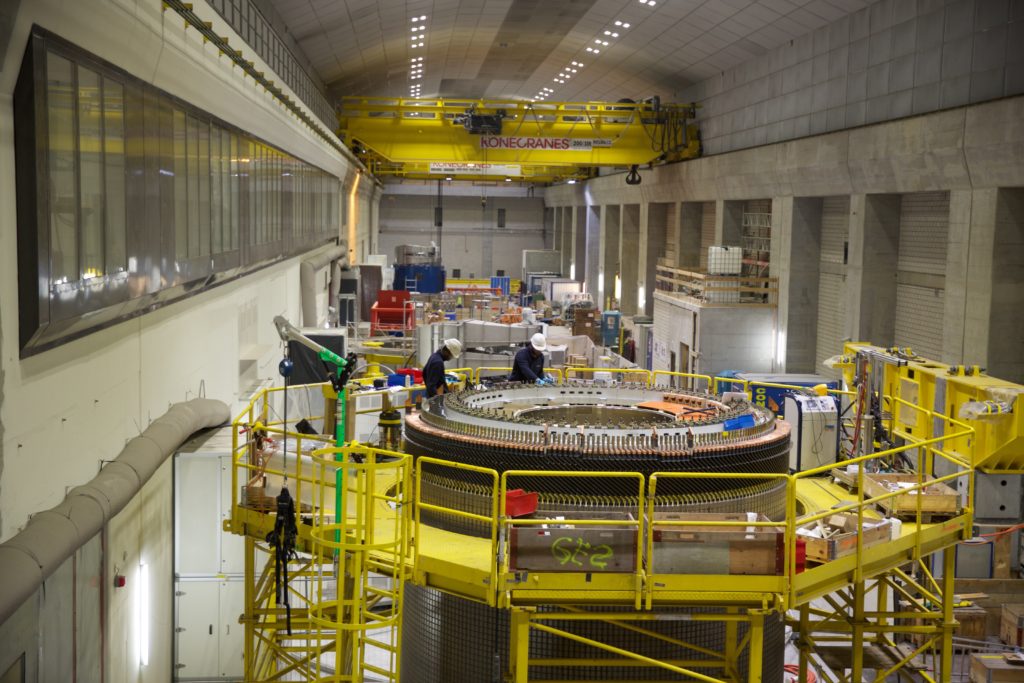 The generator hall deep inside the mountain. In the front, workers are assembling the rotor for one of the pump turbines. Since it’s too large to transport through the network of tunnels, workers must assemble some equipment on-site. Image credit: GE Reports/Tomas Kellner

Enter a tunnel drilled into the heart of the mountain. You drive two miles in a Mercedes truck converted for passenger transport. The last few hundred yards is a system of tunnels and caverns, illuminated by color-coded fluorescent lights, that drop you off inside, at long last, a generator room. 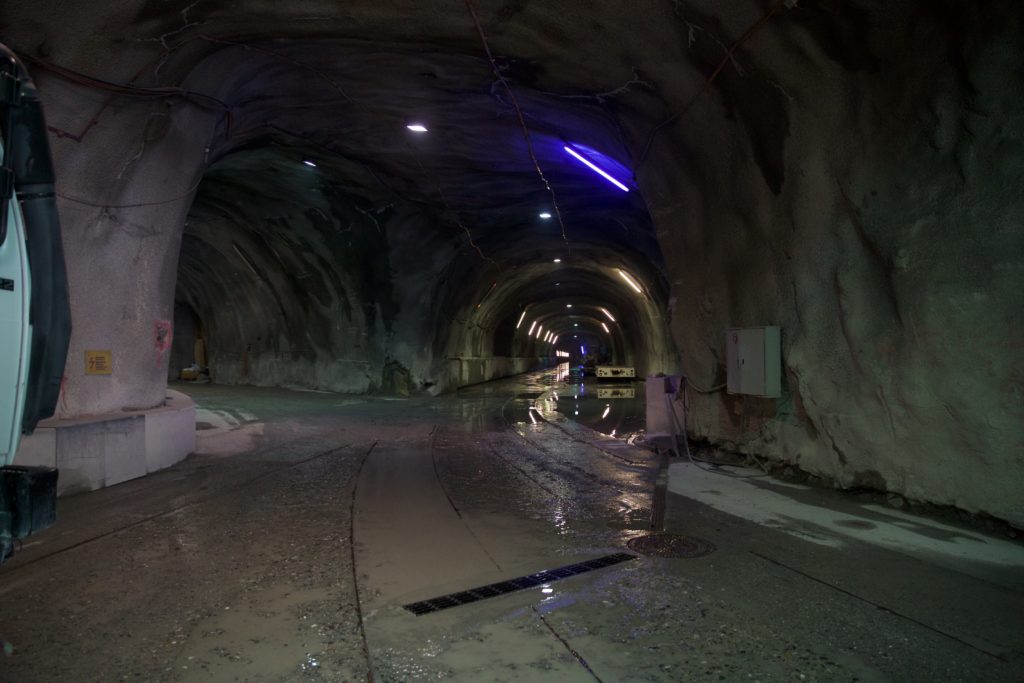 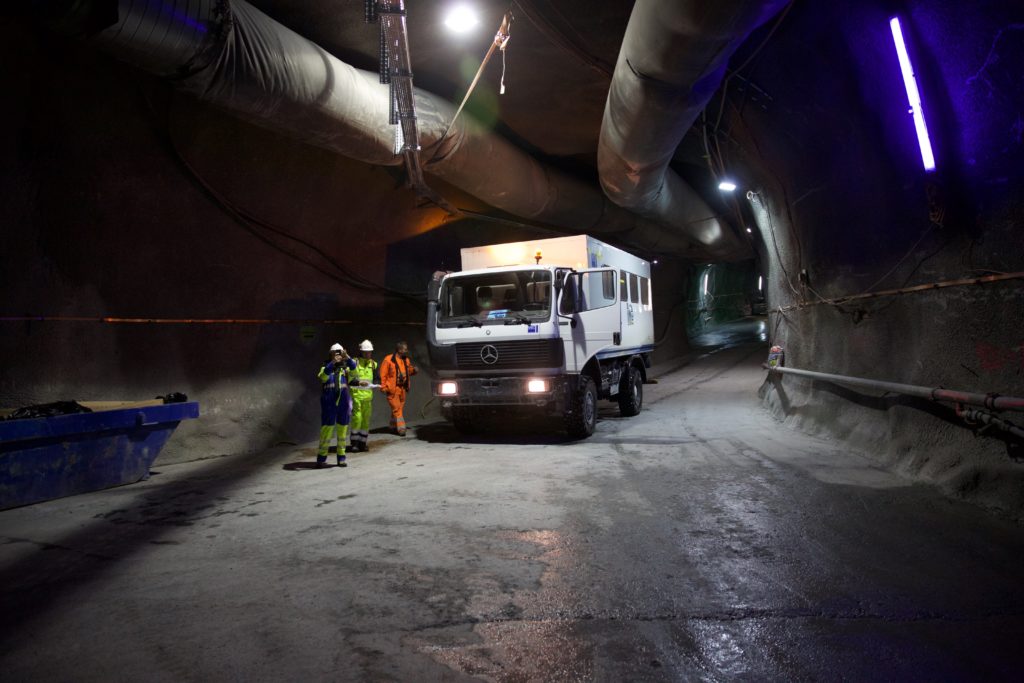 A remarkable amount of space was excavated here and Axpo, which operates the site, stuffed it full with technology. It brings to mind either Europe’s medieval cathedrals or a secret underground military command center.

François says the GE technology, which the company acquired with Alstom, allows hydropower plants to become a key part of the power-generation network. Since the GE pump turbines here can stop and start pretty much immediately, they give utilities the flexibility to incorporate intermittent sources of energy like wind and solar and help stabilize the grid.

GE technology powers some 40 percent of pumped-storage power plants in the world, and the company is currently developing more than 6,000 megawatts of projects around the world — half of them with variable-speed technology. The same technology installed at Linthal will also power the Nant de Drance (Switzerland) and Tehri (India) hydropower plants. Says François: “Hydro is flexible and storable and, combined with the right technology, it is one of the most powerful tools for putting more renewable energy on the grid.” The power plant is located above a narrow Swiss valley. The two emerald lakes at the bottom just store water and are not used for power generation. Image credit: GE Reports/Tomas Kellner 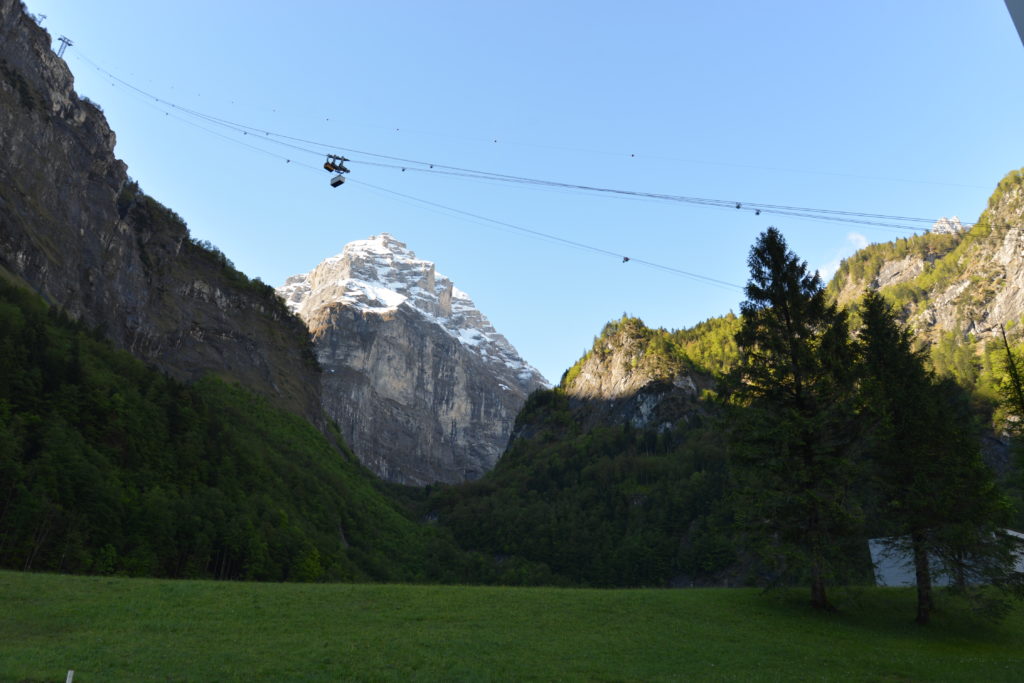 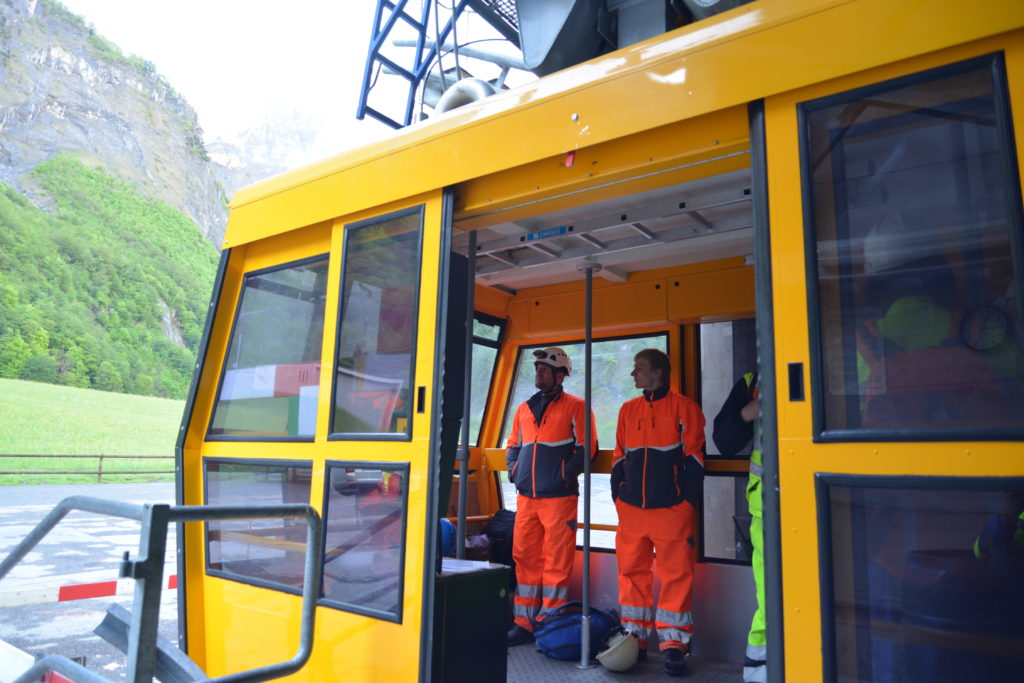 A pair of workers inside the cable car. Image credit: GE Reports/Eric Lenoir 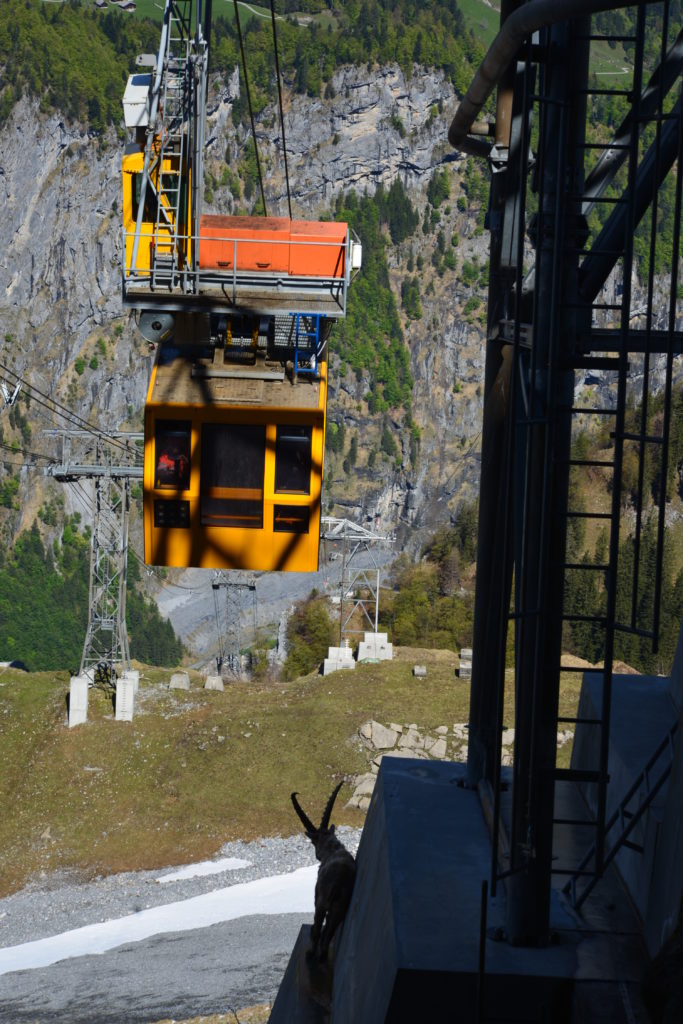 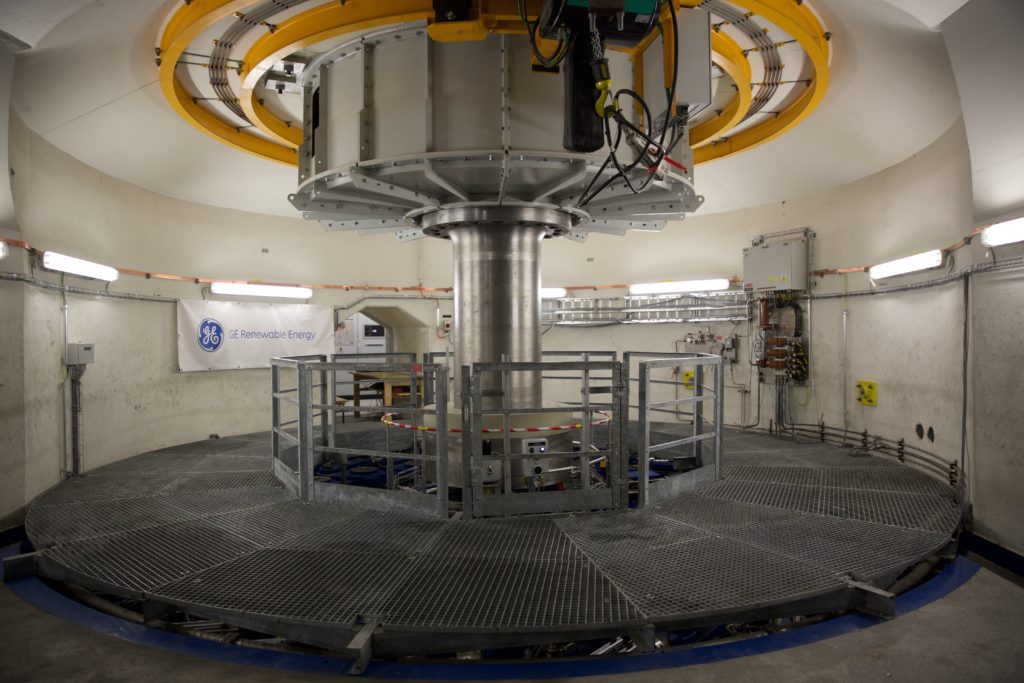 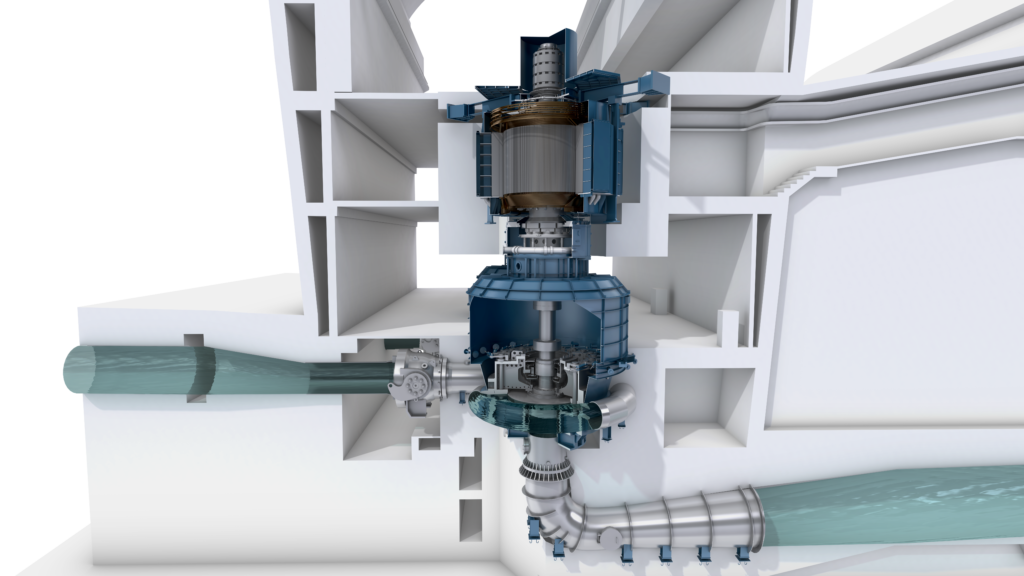 The Linthal power plant will have four variable speed hydro generators like the one shown above. They allow operators to change output, absorb spikes in demand and help utilities stabilize the grid. Image credit: GE Power

This massive valve holds a column of water that rises twice the height of the Eiffel Tower. Image credit: GE Reports/Eric Lenoir 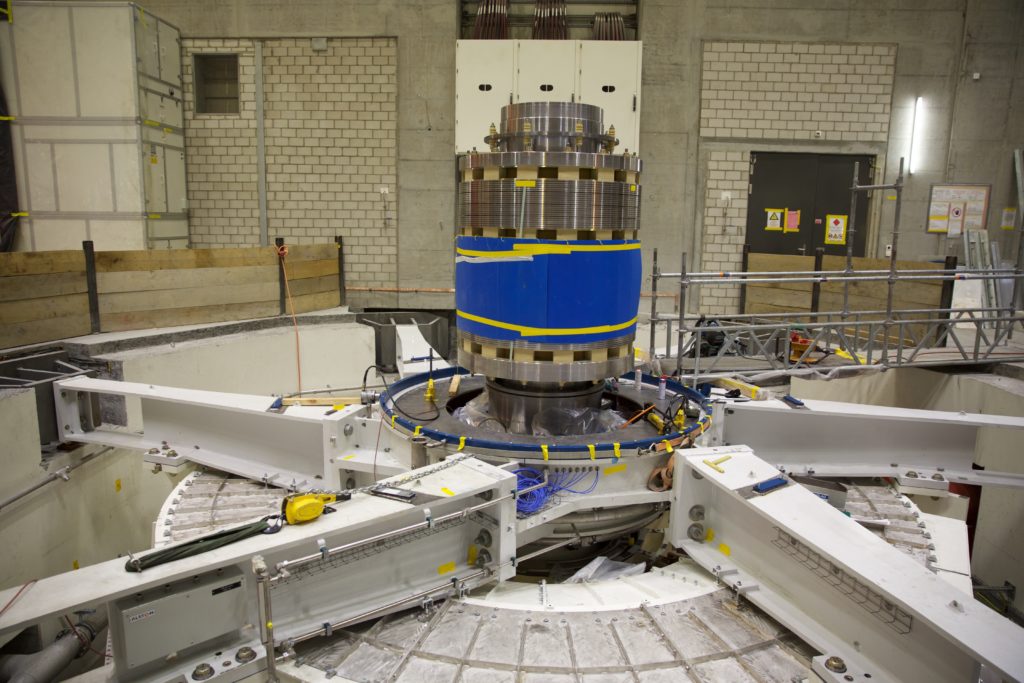 The rotor and a stator after completion. Image credit: GE Reports/Tomas Kellner 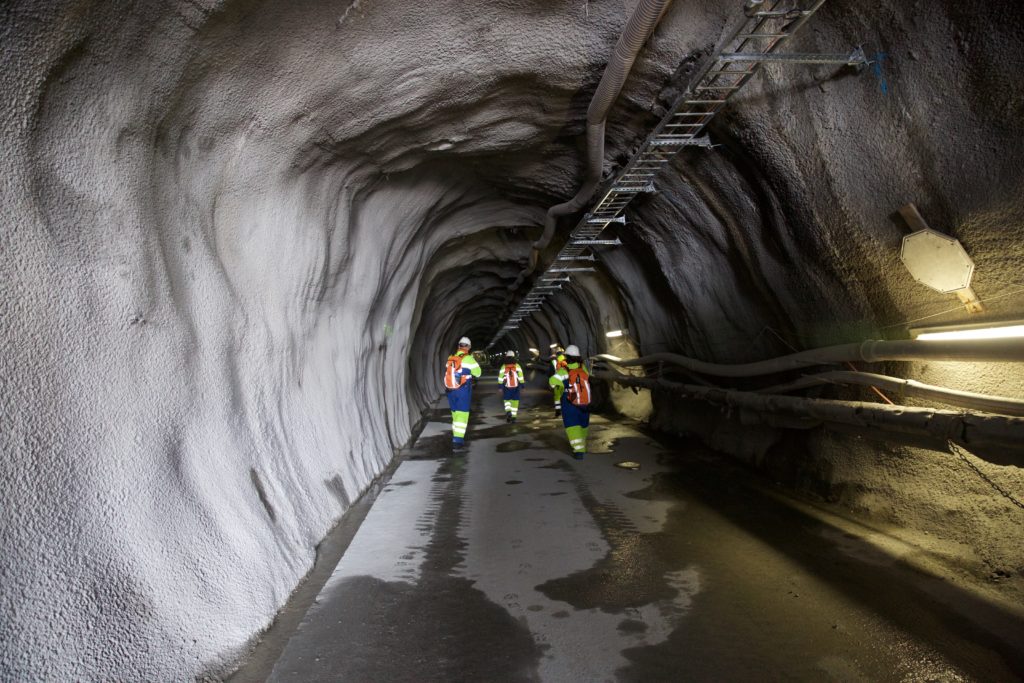 Above and below: The mountain hides an underground labyrinth. Image credit: GE Reports/Tomas Kellner 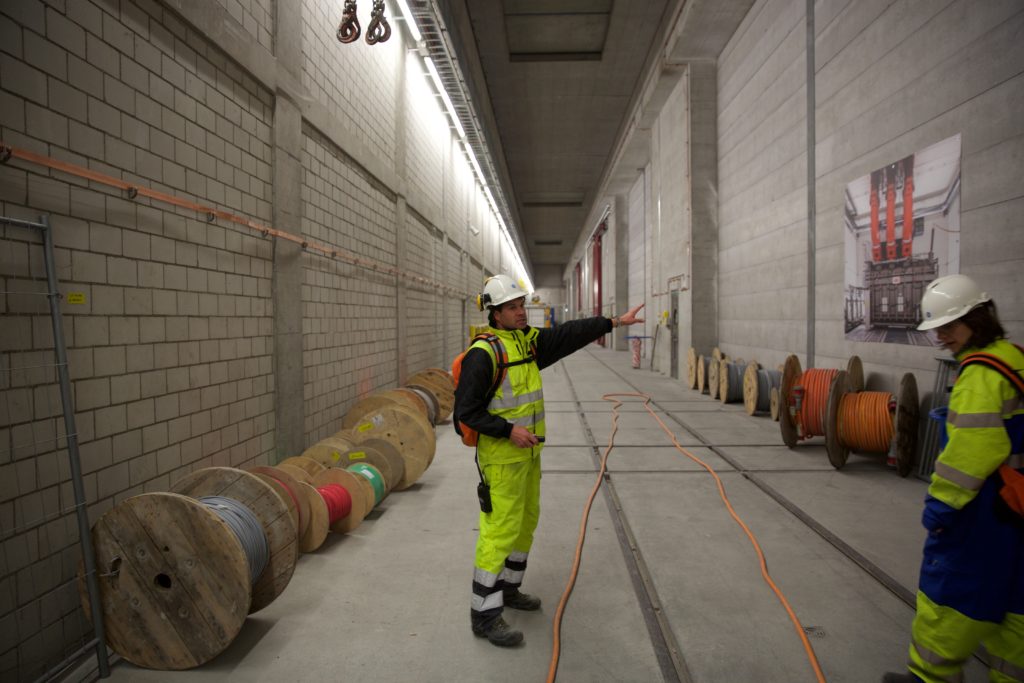 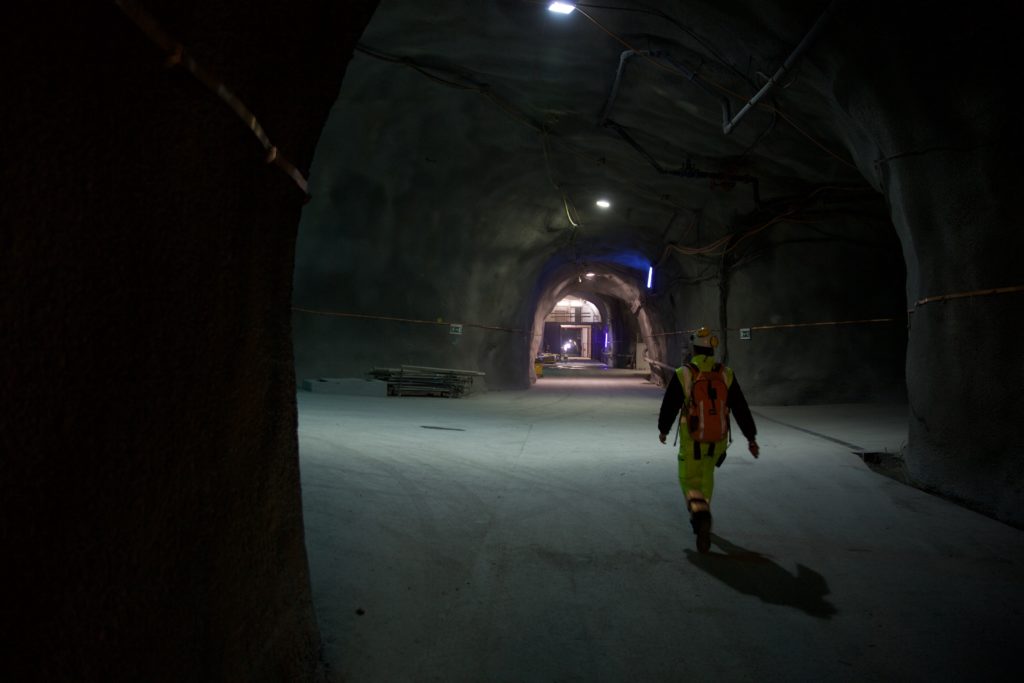