This Idea Is Fly: The Story Of The First Passenger Flight Using Only Sustainable Aviation Fuel In One Engine

Some big ideas begin their life as a sketch on a napkin. You might say that a recent commercial flight that could help the aviation industry reduce its carbon footprint had only a slightly less humble beginning: It popped into existence as a PowerPoint slide during a video call.

Early last year, Jeff Shaknaitis, who works as a senior engineer for customer technical programs at GE Aviation, was presenting to United Airlines ideas for how the companies might collaborate to reduce flight CO2 emissions. Shaknaitis is passionate about fighting climate change, and one of the bullet points on his slide caught the United team’s attention: an engine powered by 100% sustainable aviation fuel (SAF).

There were many obstacles to overcome, but this winter the idea became reality. On December 1, United became the first airline to operate a passenger flight using 100% SAF in one of its engines. “After our first dialogue on SAF, one thing quickly led to another and culminated in a historic milestone for aviation,” Shaknaitis said. “Thousands of hours of work went into making the flight a reality, and there are more people than I can count who were integral to making it happen.” 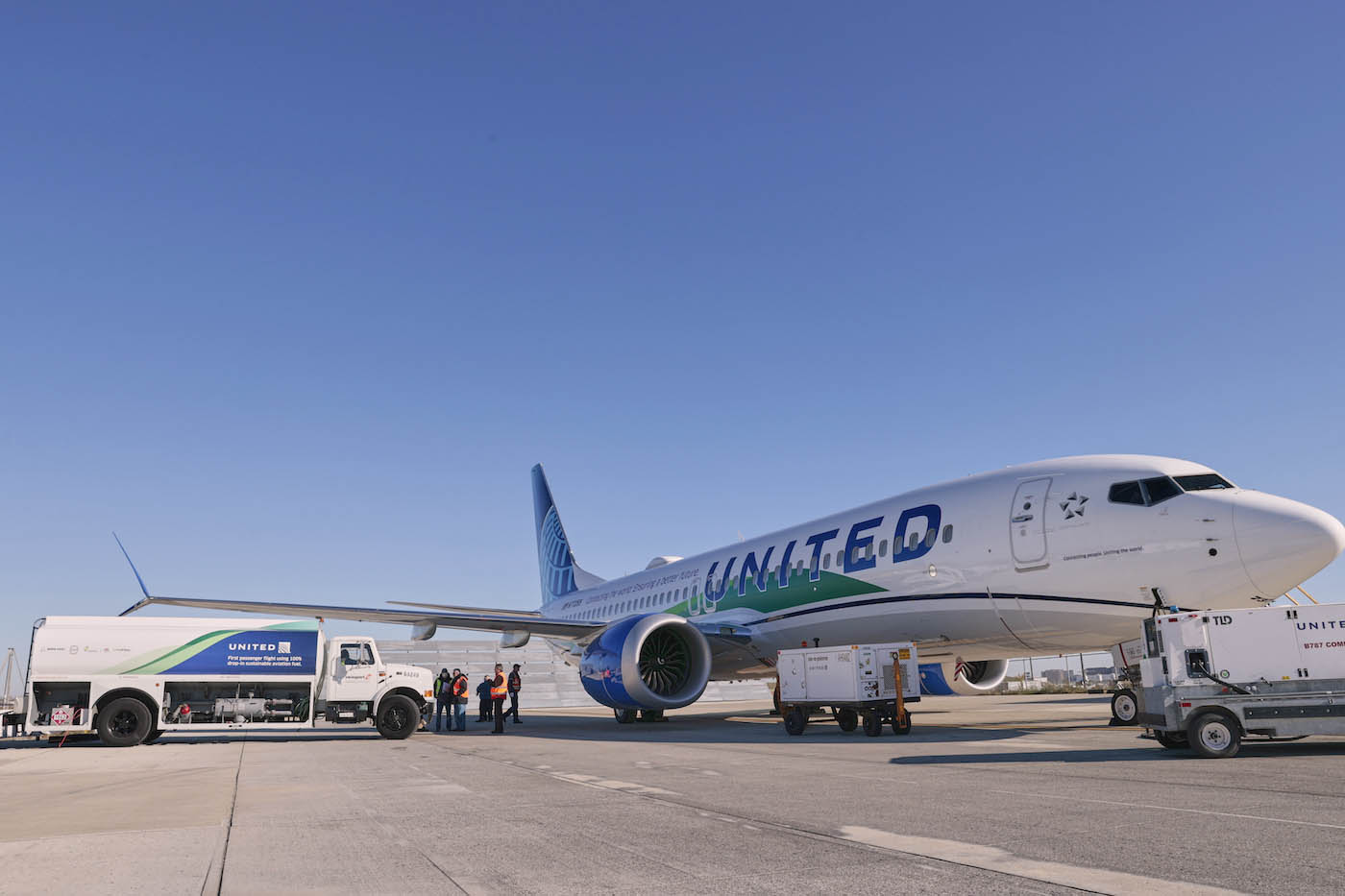 The flight, from Chicago to Washington, D.C., carried more than 100 passengers, including Shaknaitis, United CEO Scott Kirby, and GE Aviation CEO John Slattery. The jet, a Boeing 737 MAX 8, used a pair of LEAP-1B engines developed by CFM International, a 50-50 joint company between GE and Safran Aircraft Engines. One of the engines operated on 100% SAF and the other used the same amount of conventional jet fuel. The point was to demonstrate that there are no operational differences between  SAF and petroleum-based jet fuel. “Stopping climate change and achieving environmental sustainability is imperative, it’s possible, and I plan to do everything I can to help,” Shaknaitis said.

SAF is jet fuel made from plant oils, algae, greases, fats, waste streams, alcohols, sugars, captured CO2 and other feedstock sources and processes. By switching from petroleum to SAF — when you take into consideration the entire life cycle of the fuel — the aviation industry could reduce its carbon contribution from fuel by up to 80%, according to industry associations the Air Transport Action Group and the International Air Transport Association.

Currently, a SAF blend can contain up to 50% SAF mixed with petroleum-based Jet A or Jet A-1 fuel. United had to get special permission from the U.S. Federal Aviation Administration to operate an aircraft engine fueled by all SAF. 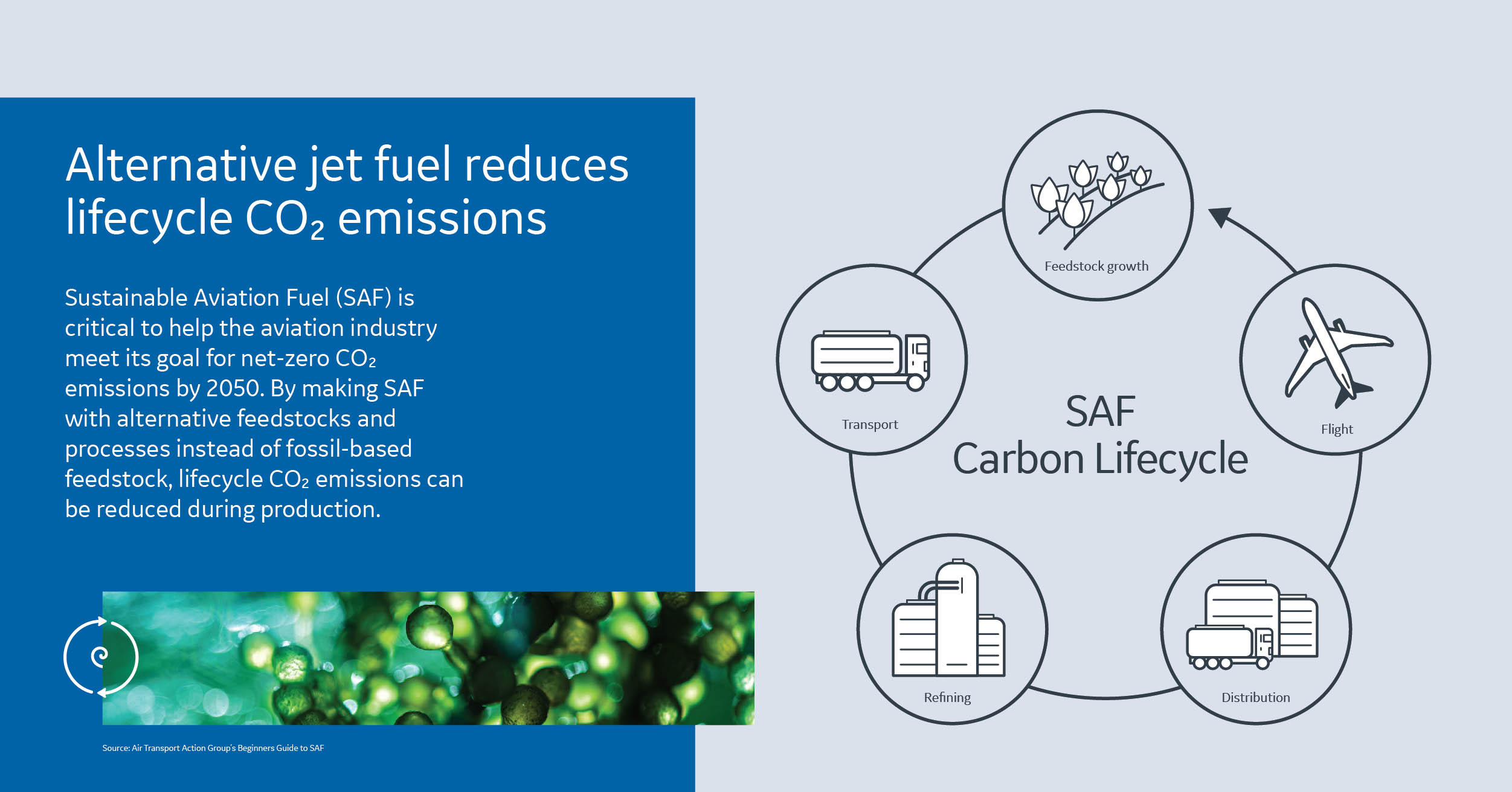 GE has been studying and testing SAF since 2007. The company works closely with SAF producers, regulators and operators to ensure that SAF can be widely adopted for use in aviation. In fact, Gurhan Andac, GE Aviation’s engineering leader for fuels and fuel additives, who was also on the United flight, leads an industry committee helping define standards for  SAF so it can be approved for industry use. Tests have shown that SAF can work by itself without being blended with conventional jet fuel. The United flight contributed to the research-and-development work to standardize SAF and further reduce life-cycle CO2 emissions. “This flight was tremendously important,” Andac said. “This was not just the first flight with passengers on it to use all SAF in one engine, but it had great practical value regarding increasing the SAF blend ratio above the current limit we have at 50%.”

Andac also pointed out that the SAF powering the engine was a blend of two different SAF types — SAFs made from different feedstocks. “What we learned from this flight is that we can actually blend two different distinct SAF types together to get to a fully drop-in sustainable synthetic jet fuel as a replacement for conventional jet fuel,” he said.

“Drop-in” ready SAF is interchangeable with conventional Jet A and Jet A-1 fuel and requires no modifications to engines or airframes. This also makes it compatible with the existing commercial fleet and the existing fuel distribution and storage infrastructure. Says Andac: “These molecules don’t know where they come from.”

But they can help the entire industry reach a new, less carbon-intensive destination.