The Road To Decarbonization: How To Achieve A Lower-Carbon Future? The Energy Industry Has Some Ideas.

There has been a lot of talk in Washington recently about decarbonization and bringing more renewable energy online. Proposals include extending tax credits for wind and solar power and building enough offshore wind turbines to capture 30 gigawatts of wind energy by the end of the decade — enough to power more than 10 million American homes and reduce carbon dioxide emissions by 78 million metric tons.

The energy industry can bring some valuable insights to the table. More than two dozen large U.S. utilities, for example, have already committed to becoming carbon neutral by 2050. “There’s no doubt that the electricity sector is the lead horse in decarbonization,” says former Energy Secretary Ernest Moniz, who spoke recently at a Washington Post Live “Future of Energy” event sponsored by GE. “The investor-owned utilities are heading towards 50% reductions in emissions in this decade and are prepared to pick up the pace even more in response to the president’s challenges.”

But the road to a low-carbon future isn’t easy. Consider that for all the recent growth of renewable energy generation, wind and solar power still account for less than one-tenth of the world’s energy output. And as utilities around the world try to cut back on carbon-intensive coal power, they will need to replace it with energy from sources that not only have low-carbon emissions but also is always available — as we all want electricity on windless, rainy days.

This is a big task. According to the International Energy Agency, coal generated 35% of the world’s electricity in 2020, and as recently as 2018 it produced nearly a third of the world’s carbon emissions. One way to swap out coal involves natural gas. A gas-powered generation plant emits anywhere between 50% and 65% less carbon than coal. And a modern gas power plant can quickly ramp up output when the wind stops blowing. Indeed, the transition to gas has been the largest factor in the ability of the U.S. power sector to reduce its carbon emissions by 33% since 2007. GE believes natural gas can serve as a vital complement to renewable energy and, along with investments in the grid, can help to drive decarbonization. “Considering the urgency of the challenge in front of us, we can now do more, faster, and it starts with the power sector,” says Scott Strazik, CEO of GE Gas Power, who participated in the sponsor's segment of the Washington Post Live event. 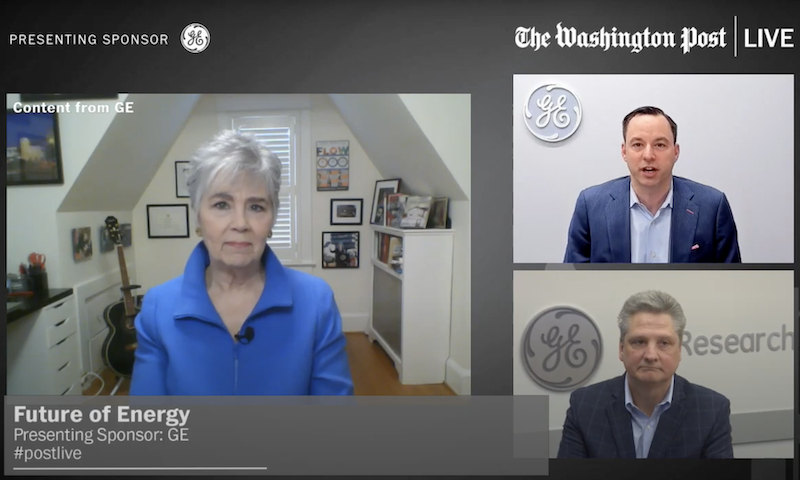 Homes and businesses aren’t the only consumers looking to use lower-carbon electricity. The future of the transportation industry is shaping up to be electric as well, raising the stakes in finding more sustainable sources of energy. Without progress on making the production of electricity more sustainable, other industries relying on increasing their use of electricity — such as electric vehicles — will provide less net benefit than needed. If that doesn’t happen, says Strazik, “we’re not going to get the benefit as we electrify these other industries.”

GE recently laid out a road to lower carbon in a white paper discussing the interplay of gas and renewables. It involves growing renewable power sources as fast as the world can afford while at the same time investing in modern gas power plants in order to ultimately retire coal. The third step involves improving and investing in the grid so that it can better accommodate the different players supplying and consuming electricity.

Debate over grid modernization is an important reminder that technological improvements aren’t limited to methods of power generation. Software and digital investments — such as the monitoring and automated communications made possible by the Internet of Things — can produce significant gains to productivity and safety. “The benefit of modernizing and adopting these latest technologies to the grid is paramount,” Vic Abate, senior vice president and chief technology officer at GE, said at the Washington Post event. “We see more opportunity to drive renewables, greater resilience and really a more robust path to decarbonization with the administration’s plan to invest in the grid.”