Engineer and avid runner David Riddle usually finds himself asking “Why do I do this” during races. But this year’s 125th running of the Boston Marathon was an exception.

That’s not to say that it wasn’t hard or that it didn’t hurt. It did. But everything was going according to plan. A rarity in distance running. While Riddle has run upwards of 10 marathons, many more 50K+ races and even two 100-plus-mile races, this was his first Boston Marathon.

“People tell you about the crowds in Boston, and they were everything they were billed to be,” he says, reflecting on the race. “But the volunteers were also super into the event in a way that was surprising, so that just added to the atmosphere and mystique of the Boston Marathon for me.

It all powered Riddle to a remarkable 2:28 finishing time, wearing a GE singlet, of course.

Much like engineering, his exacting race training and focus on continuous improvement were paramount to Riddle's success, he says — though his blistering pace is certainly testing the limits of continuous improvement when it comes to amateur marathon running. Marathon training is a rigorous and relentless endeavor, and there are few off days. Riddle, who leads the Acoustics and Installation Aerodynamics group on the engineering team at GE Aviation, is the first to admit he wouldn’t have accomplished what he did in Boston without the support of his family and colleagues.

“You definitely don’t run a 2:28 marathon at 40 years old when you have a wife with a demanding career, two small children and your own people leader role at GE Aviation without the support of the business and coworkers,” he says. “I’m proof that GE Aviation does more than just talk about work-life balance.” 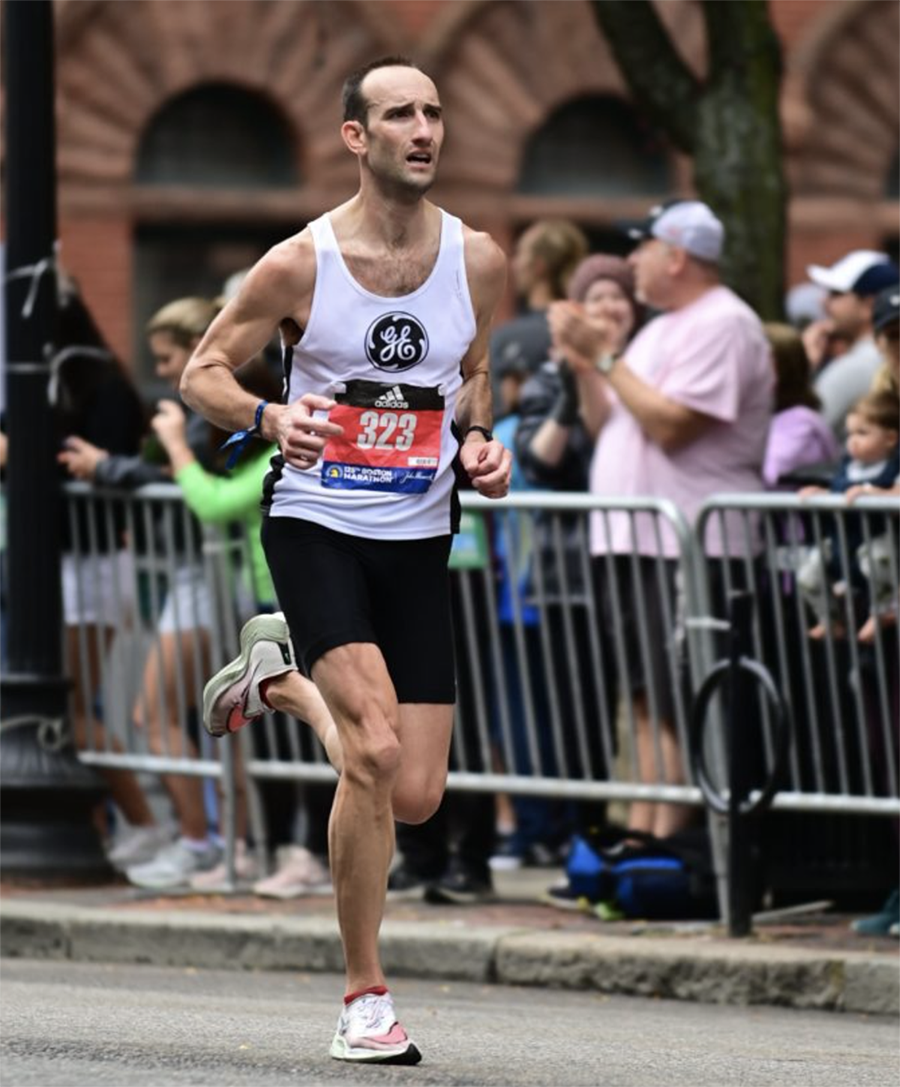 It’s an essential part of life for Riddle, who's been a runner for nearly 30 years. From the structure to the discipline to the routine, running suits his personality and helps him be a better, more understanding manager.

Fortunately, he is also surrounded by an impressive group of runners in the Advanced Technology Organization in engineering, many of whom run together at lunch and support each other as training partners, coaches and colleagues.

“My team supports me by understanding that I have to get in my run every day in order to be my best self,” he says. “Whether that means I’ve planned to step away for a long lunch, or I can’t stay after 5, they understand and respect this is simply who I am. In return, I believe this has a positive impact on my team as they see me on a nearly daily basis model a commitment to work-life balance and know they can expect the same grace from me as a manager.”

At its core, the lean concept is to get better every day, whether it’s on the shop floor, in the engineering office or on the running paths of Cincinnati.

“Fundamentally, the goal of training is to improve the mechanical efficiency of your running stride and eliminate wasted energy usage — to become lean, in other words,” he says.  “But it’s not just running itself where you’re looking to continuously improve; nutrition, sleep, strength training, mental preparation, etc., are all aspects of the sport where there are gains to be had.”

Riddle and his team are similarly focused on gains in sustainable aviation, including uncovering new and innovative ways for GE and the aviation industry to reach the goal of net-zero CO2 emissions by 2050. Their current work concentrates specifically on reducing both fuel burn and noise emissions through engineering design, analysis and testing.

This includes work on the CFM RISE* (Revolutionary Innovation for Sustainable Engines) technology program announced in June, which aims to demonstrate and mature a range of new, disruptive technologies for future engines that could enter service by the mid-2030s.

“I really do believe I am playing a part in inventing the future of flight,” he says. “I know the design efforts in which I participate can positively impact almost everyone on this planet within a few years.”

*RISE is a registered trademark of CFM International, a 50-50 joint company between GE and Safran Aircraft Engines.

This article originally appeared on the GE Aviation blog.