Sound Engineering: From Big Cities To Rainforests, Pocket-Size Ultrasound Helps Save Lives Around The World

Last year, Dr. Yale Tung Chen, an emergency medicine clinician in hard-hit Madrid, Spain, became one of a handful of clinicians around the world testing Vscan Air™, a handheld, wireless ultrasound scanner developed by engineers at GE Healthcare. The device, which GE Healthcare released for sale in the U.S. and Europe in March, beamed images from the ultrasound probe to an app on his smartphone, and this quickly became common practice on his daily rounds. “I’ve been using it on COVID-19 patients, scanning hearts, lungs, blocked vessels,” he says. It fit inside his white coat pocket and allowed him “to quickly perform a complete exam on my patient and make decisions quickly right at the bedside.” Anders Wold, president and CEO of global ultrasound at GE Healthcare, envisions the Vscan Air™ “as delivering on the future of healthcare at a time when ultrasound has proven to be an essential tool at the point of care.”

Wold is speaking from experience. GE Healthcare was the first company to bring a pocket-size color ultrasound scanner to market, 10 years ago. The company has since supplied some 30,000 Vscan Family technologies to clinicians in over 100 countries. GE Healthcare estimates that the scanners have helped clinicians care for more than 50 million patients. Here are some of their stories.

In Papua New Guinea’s rugged Gulf Province, the Kamea people measure travel in terms of walking distance — there are few roads in sight. And so recently, when a woman named Yaniamo began to fear complications in her pregnancy, she walked for two days with her family to the nearest clinic, Kunai Health Centre. Challenges like these contribute to high infant and maternal mortality rates in Papua New Guinea, where many children are delivered at home and some parents wait until their infants turn a year old before naming them. But when Marie Elizabeth Bell, an American nurse, undertook a nine-month stint at the Kunai clinic, she found that medical workers there had a secret weapon to monitor the health of expectant mothers and their babies: an ultrasound so portable it fits in clinicians’ pockets.

In the palms of their hands: At Kunai, Yaniamo was examined by medical workers using Vscan with Dual Probe, a handheld ultrasound made by GE Healthcare that’s been a boon for infant and maternal health. “The exam by medical workers can be life-changing for some of these expectant moms, as this may be the only medical care they receive during their entire pregnancy,” Bell says. In Yaniamo’s case, the Vscan revealed that her baby was transverse, making a natural delivery out of the question — and compelling clinic staff to call in a helicopter, which transported Yaniamo to a regional medical center where, with the help of a C-section, she and her husband welcomed a happy, healthy newborn.

In the small town of Lucedale, Mississippi, Dr. Leigh Ann Cashwell found herself caring for her 15-year-old son, Luke, with a GE Healthcare handheld ultrasound system called Vscan Extend, when she noticed something wrong with his thyroid. “I immediately knew that there was nothing normal about what I was looking at,” she says. Lab testing confirmed her suspicion: Luke had an autoimmune disease in which the body attacks the thyroid. While Cashwell’s story is every parent’s worst nightmare, this one had a happier ending. Luke was able to get treatment for his thyroid condition. “It was an absolute blessing that we were able to find this and get it fixed so quickly so he can live a healthy, normal life,” Cashwell says.

Magic wand: The American Academy of Family Physicians refers to point-of-care ultrasound as “the biggest advance in bedside diagnosis since the advent of the stethoscope 200 years ago.” But handheld ultrasound isn’t just for primary care settings. Doctors use the devices throughout the hospital, including in the ICU and the oncology unit. And it’s played a role throughout the pandemic: Clinicians around the world are using the Vscan Extend to quickly monitor the lungs and heart of COVID-19 patients. With the addition of the AI ejection fraction app, Vscan Extend can also be used to help clinicians evaluate patients’ hearts for risk of heart failure. “Handheld ultrasound facilitates an earlier and more reliable diagnosis,” says Dr. Francis Pellet, a general practitioner at Léopold Ollier Medical Station–Les Vans, in France.

With 12 hospitals across Pennsylvania and New Jersey, St. Luke’s University Health Network has grown into a bustling regional provider. Exponential growth over the past few years, however, has presented challenges to the network in terms of standardizing care and streamlining workflows, particularly in the system’s vascular, radiology and echocardiography departments. But that’s changing. St. Luke’s has just announced that it is partnering with GE Healthcare, which will install 76 ultrasound systems before the end of 2020. Valued at $11 million, it’s the largest single-order ultrasound deal GE Healthcare has made in the U.S. to date.

Seeing is believing: The heart of the new setup will be GE Healthcare’s LOGIQ E10 for General Imaging and Vivid E95 for Echocardiography ultrasound machines. Both systems connect to an automated reporting and post-processing system called ViewPoint 6. The new equipment produces superior-quality images that can support quick diagnoses and treatment for patients. ViewPoint 6 alone is expected to save St. Luke’s $300,000 a year in radiology efficiency gains. GE Healthcare has agreed to continue upgrading the system for the next four years, meaning that — according to Everett Cunningham, president and CEO of GE Healthcare in the U.S. and Canada — St. Luke’s “can maintain its fleet with the latest technology developments.” 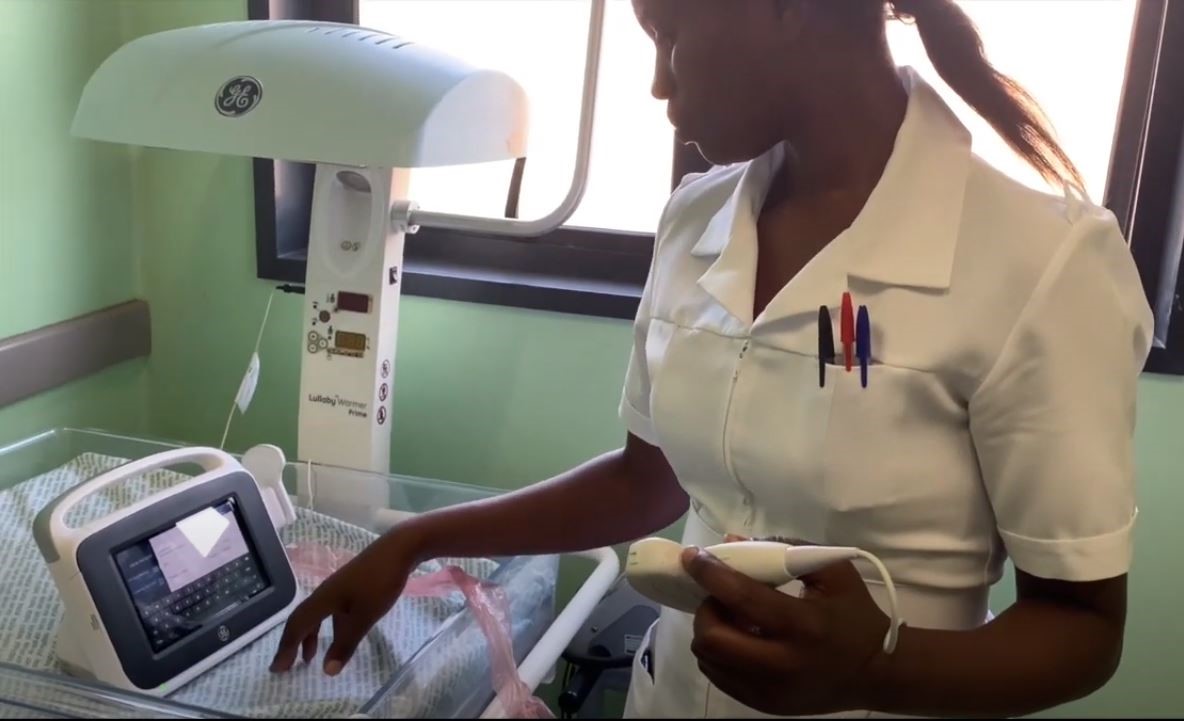 Sister Miriam Cibale Mushoda, a nurse practitioner at the Chilanga District Health Center, in Zambia, once had to use her hands to tell if an expectant mother was carrying her baby in breech. Then the clinic received a handheld ultrasound device. “The first time I held the ultrasound probe and was able to see the fetal heart and cardiac activities — and the presentation of the baby — was the greatest day of my life,” she says.

Improving delivery: With ultrasound now at the health center, Sister Miriam and her team have improved diagnostic confidence, because they can now see what they once could only feel and hear. The handheld ultrasound system is easy to carry and clean, and it quickly gives users the information they want. If the patient can’t come to the clinic, Sister Miriam simply takes the portable ultrasound in her backpack and travels by bicycle to the patient’s residence. A nurse practitioner can use it to see 30 women a day — more than double the previous number.

Dr. Nils Petter Oveland still recalls his epiphany about handheld ultrasound. Back in 2018, the Norwegian clinician was in Haiti on a three-month mission to train local medics. He was distressed by the lack of working imaging equipment in the country. “In one hospital they had an X-ray machine, but they couldn’t plug that in because the electricity would break down,” Oveland recalls.

Haiti to Norway: Fortunately, Oveland and his colleagues had packed their handheld ultrasound scanners. “I knew then that handheld ultrasound was the way to go if doctors were going to reach the masses,” says the doctor, who also heads up research and development at the Norwegian Air Ambulance Foundation. The ability to obtain high-quality ultrasound images without a tangle of cables is crucial for Oveland, who often finds himself treating patients in a noisy, cramped and turbulent helicopter cabin. “Even when there is turbulence, you always need that one image that can tell you what’s wrong with a patient,” he says.