“So we rowed through the narrow strait in tears,

On one side Scylla, on the other, shining

Charybdis with a dreadful gurgling noise

sucked down the water.”*

If you enjoy tales from the deep, you will know all about Ulysses, the hero of Homer’s epic poem, “The Odyssey.” The many ordeals he and his crew endured on their peripatetic journey home from Troy included sailing their ship past beguiling sirens and then charting a path between two terrible sea monsters: Scylla and Charybdis.

Great navigational feats are also in a day’s work for Brice Lavault, a marine operations leader for GE Renewable Energy. But unlike Ulysses, Lavault is not trying to steer clear of towering giants. He’s docking with them.

The offshore wind services team is maintaining the Merkur Offshore Wind Farm, a massive wind field that covers an area of 47 square kilometers in the North Sea, some 55 kilometers off Germany’s mainland. It includes 66 GE Haliade™ 150-6MW turbines capable of producing 396 megawatts. That’s theoretically enough to supply 500,000 European homes, or a city larger than Frankfurt.

Fortunately for the offshore wind services team, it doesn’t have to rely on sails and oars. It is counting on the Windea Jules Verne service operations vessel (SOV). Named after another awesome maritime storyteller, this high-tech vessel has been specially designed and built for GE Renewable Energy by Norwegian company Ulstein. The ship is a floating mission control center, workshop and hotel that can safely ferry teams of technicians to and from turbine towers, even in rough seas and strong winds. “The objective of maintenance is to maximize the availability of the wind farm that requires utmost accessibility from this vessel,” Lavault says.

The Windea Jules Verne has just sailed from Norway to Holland, where it was handed over to GE formally this week in Eemshaven, Netherlands, where the operations and maintenance base is located. 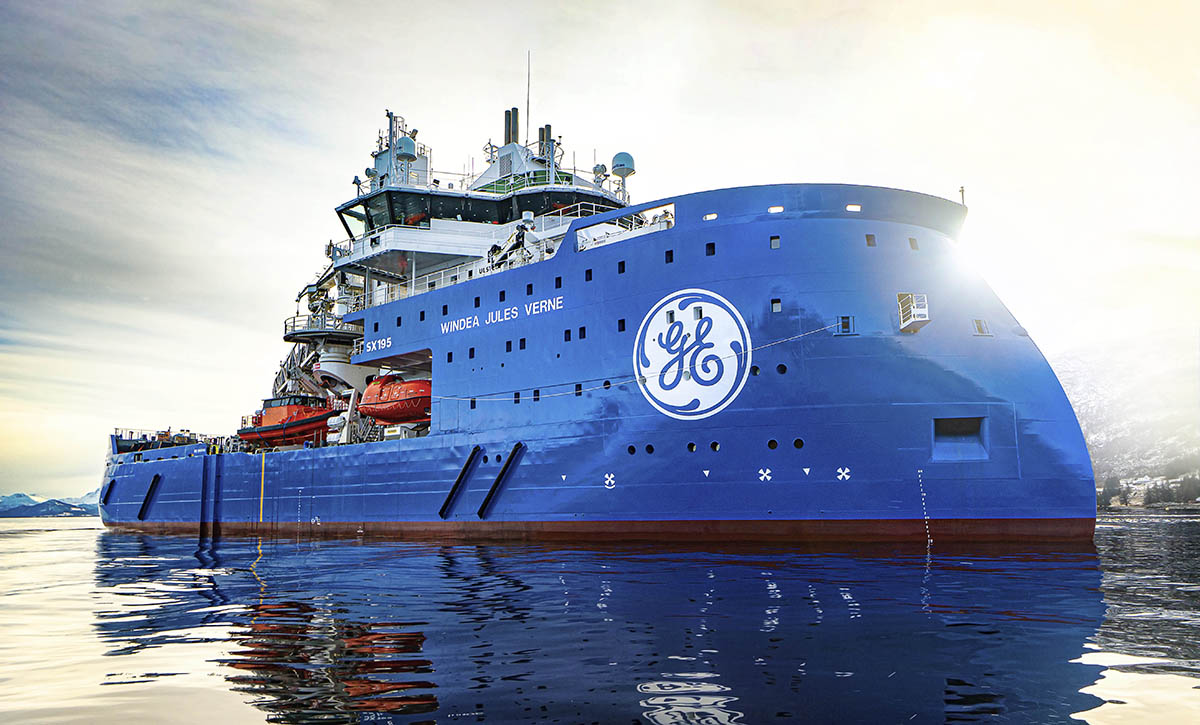 Like all machines and vehicles, wind farms also need regular maintenance to ensure that, when the wind blows, they are ready to generate at installed capacity and dispatch peak megawatt hours to the grid. But the task gets exponentially harder when the machines are located amid the cold and choppy reaches of the North Sea. “Some problems can obviously be fixed remotely, but if you can’t restart [a turbine], it will need a visit at the earliest to limit turbine downtime,” Lavault says.

Those visits — or interventions — could involve anything from minor jobs, such as sending a team up more than 100 meters in the turbine’s service elevator to change the oil that lubricates the gearbox, to major work such as changing a turbine blade with the help of a giant jack-up vessel and crane. And those interventions quickly add up. Lavault says technicians are expected to carry out maintenance on each turbine between five and 15 times per year. 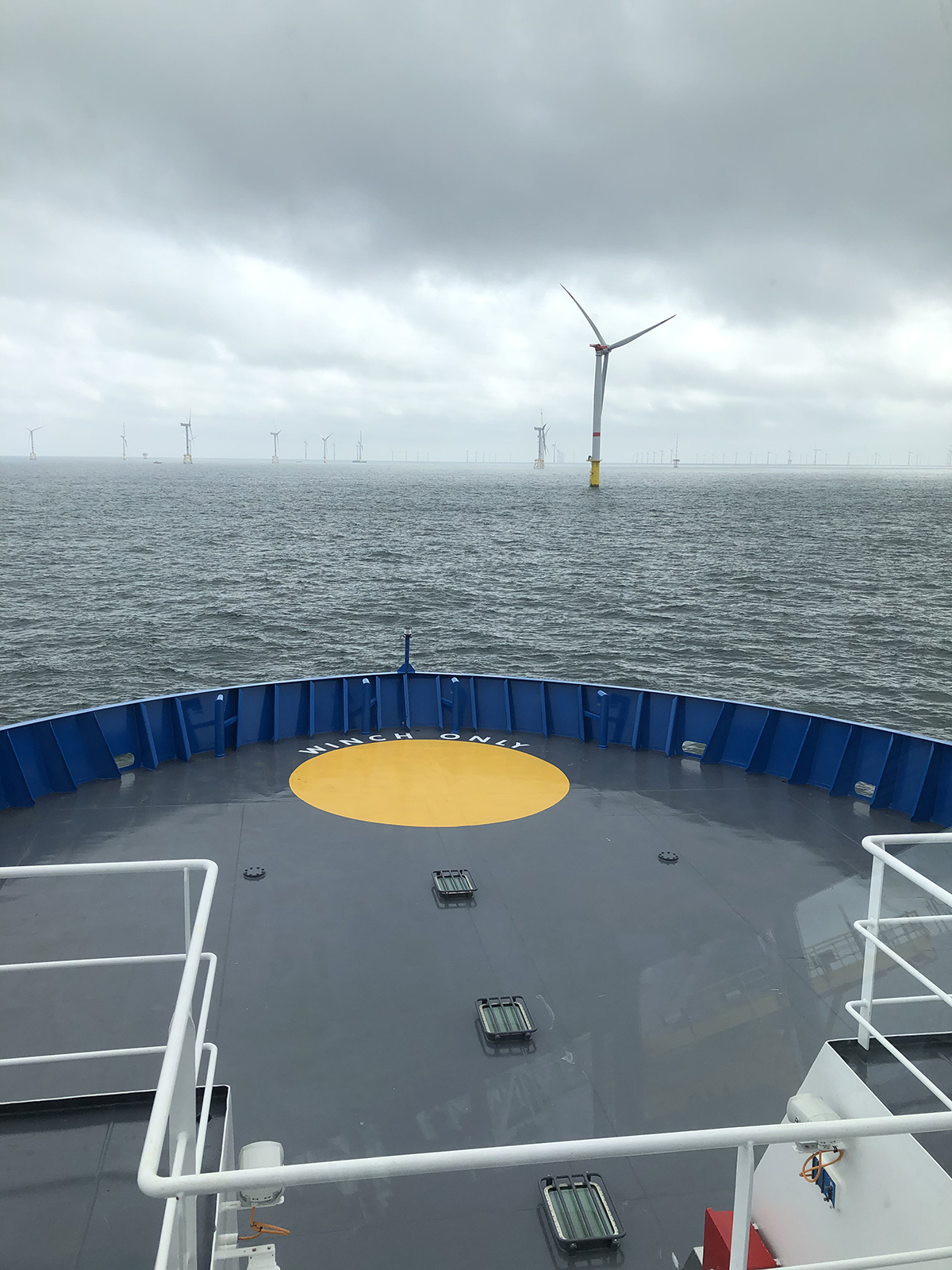 Lavault has a knack for this work. He’s a kind of superfixer for giant offshore construction and maintenance projects. Before GE, he worked for an oil and gas company that installed subsea pipelines. Whether companies need a construction vessel or crew transfer vessel for offshore projects, or a helicopter to ferry engineers back to dry land, Lavault helps take care of it. “I define, source, mobilize the marine logistic set-up to the project and services contract requirements,” he says.

A special boat like the Windea Jules Verne adds a powerful tool to his team’s arsenal. The 80-cabin vessel, with its GE logo, will have a permanent 20-strong crew, including captain, marine crew, cleaners and caterers. It also has room for an additional GE team of 80 or 90 passengers (vessel management and turbine technicians, who are mainly sourced from Germany). 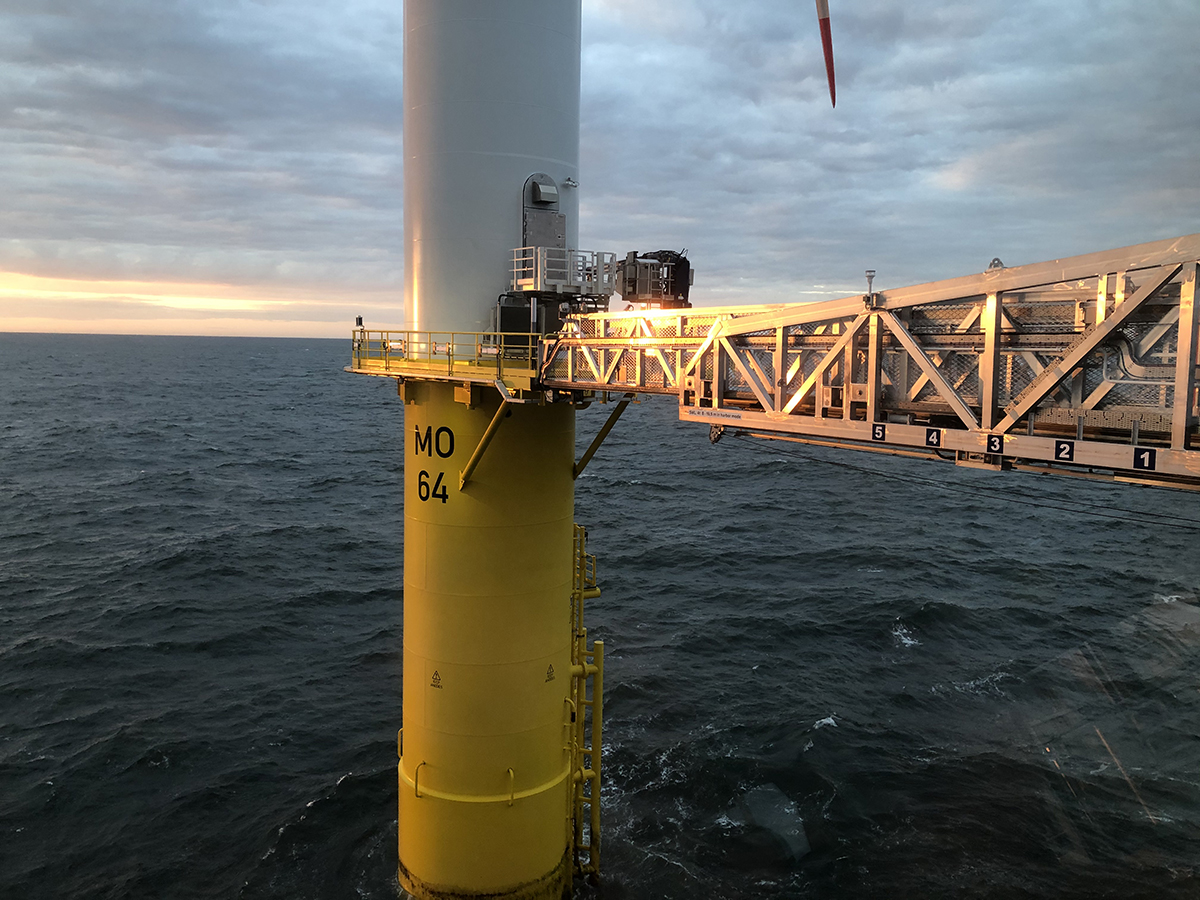 These technicians need safe access to the 66 wind turbines, especially during what Lavault calls “marginal conditions;” weather that is at the edge of the range at which turbines can operate but the vessel can have access to it. (Here, Lavault acknowledges the inherent paradox of the job: Strong winds are great for power production but usually result in rough seas.)

This is why the boat is equipped with a dynamic positioning system and advanced software to maintain its position with strong weather conditions (wind, wave and current) coming from all directions. The software and hardware are far more accurate than the global positioning system (GPS) on our cellphones.

When the boat approaches wind turbines to transfer personnel, the software helps ensure that the vessel can bob safely at a 20-meter distance next to towers, treading water in exactly the same spot. Technicians can then travel via a horizontal compensated gangway that gives them direct access from the warehouse inside the vessel into the turbine tower platform for most efficient transfer. The technicians also can be transferred via a “daughter” craft (at 12 meters), which is a smaller boat with space for a few people that will go faster throughout the wind park. This combination of smaller boat and gangway means that the SOV can “deploy more teams faster in parallel extending our working radius,” Lavault says.

The 30-meter gangway is “motion-compensated,” which means that it can telescope, steer and turn quickly to adjust to large waves that buffet the main vessel, just like a car’s suspension system. “It can deal with waves up to 2.5 meters of significant height and wind speeds of up to 20 meters per second, which are pretty extreme conditions,” Lavault says.

Once they arrive at the turbine, the technicians will put in long days, sometimes with only seals and the occasional whale for company. “We have long working days offshore that demand 12-hour shifts on the turbines or on the SOV managing the 24/7 site operations,” says Bernd Nolte, site operations manager at Merkur, who is responsible for keeping the farm’s turbines spinning. “For preventive maintenance works, technicians leave the vessel in the morning with their lunchbox and we won’t see them until we pick them up in the evening again.”

Just like workers in other offshore businesses, those technicians can regularly go a fortnight without seeing dry land, which requires plenty of self-discipline. But they can count on some creature comforts to help them relax at the end of a long shift and to build team spirit. “There are cinema rooms, PlayStations, a gym, a sauna and offices,” Nolte says. “And of course, there is internet and good food, especially on Sundays,” he adds. 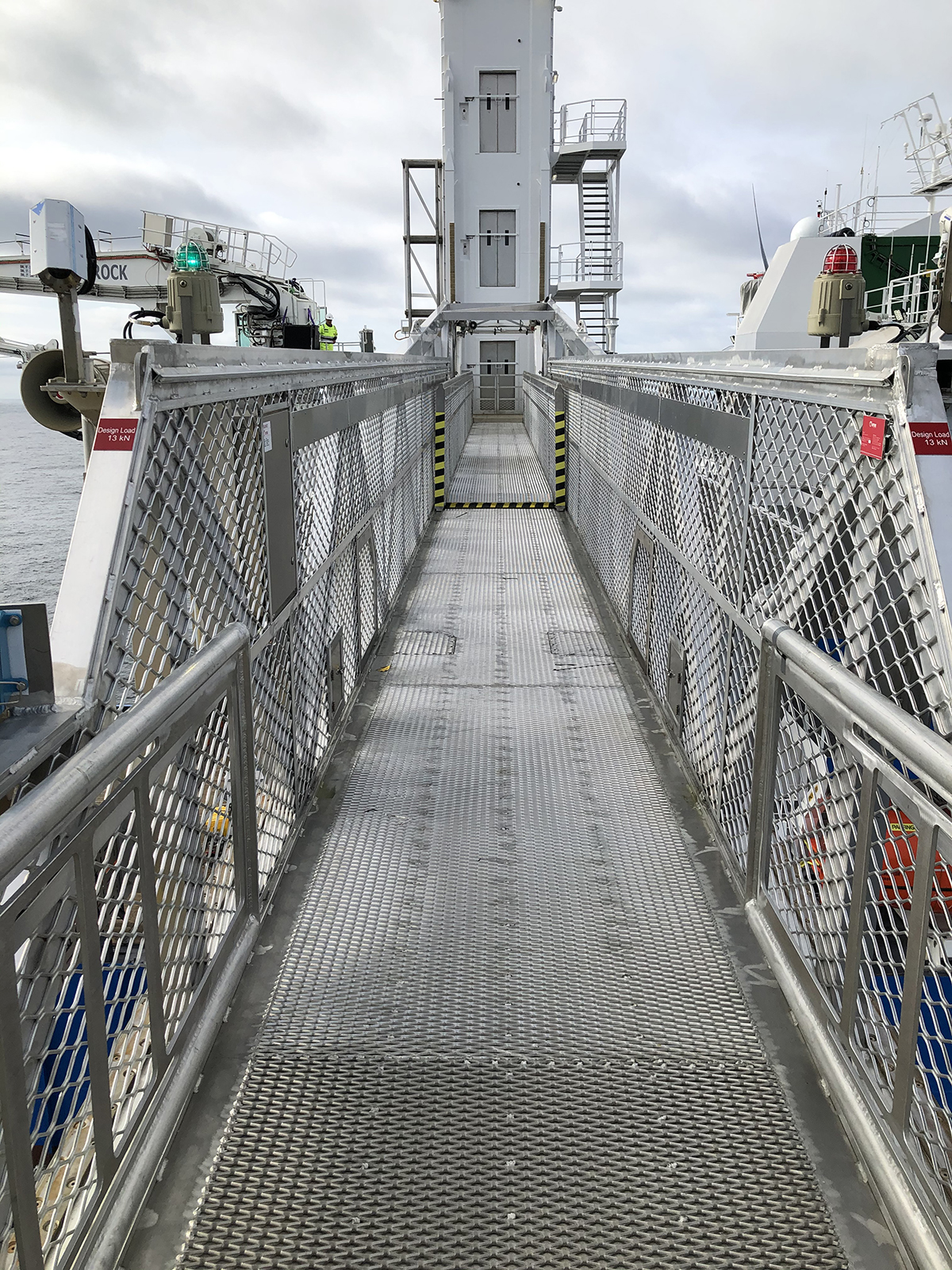 The job will be especially challenging in winter, when crews have to contend with freezing temperatures and squally showers out on the high seas. “It can be tough to find a workable window,” says Nolte. A skeleton crew of three teams, each consisting of three technicians supported by the site management team on the SOV, works through the coldest months. That is why the summer, with its longer days, calmer seas and warmer weather, is prime maintenance season. “We carry out preventative maintenance with larger teams and more equipment,” adds the operations manager.

The Windea Jules Verne is also one of the first SOVs to use a hybrid propulsion system made up of diesel engines and electric motors coupled to a 565-kilowatt battery pack. Besides lowering fuel consumption and emissions, the setup is ideal for this operating vessel as it is constantly changing power demand while it zigzags between turbines and inches back-and-forth to hold a position. GE is leasing the vessel from Bernhard Schulte Shipmanagement, a maritime services company, for eight and half years.

In fact, it may not be long before boats just like this one become a familiar sight on the eastern seaboard of the United States. In 2016, GE constructed and installed the country’s first offshore wind farm of Haliade 150-6MW turbines on Block Island, just off the state of Rhode Island. And Danish renewable giant Ørsted announced last year that it would build two offshore wind farms in America’s eastern waters using the more powerful Haliade-X 12 MW offshore wind turbines.

Ocean Wind, located off New Jersey’s coast, is the larger of the farms and as currently designed, it is expected to come online in 2024. It will be capable of generating 1,100 megawatts, the equivalent of an average U.S. nuclear reactor. Skipjack, off Maryland’s coast, is currently designed to sport a capacity of 120 MW with expected commissioning in 2023.