Shake It Off: GE’s Record-Breaking Jet Engine Is A Dust-Busting Powerhouse

At the Dubai Airshow this week, one of the most anticipated sights will be the Boeing 777X, Boeing’s new plane powered by the GE9X, the most powerful jet engine in the world. But thrust is just one of the engine’s many attributes. It’s also tough, and the United Arab Emirates, a hot, desert country that also happens to be the base for two of the world’s largest airlines — Emirates and Etihad Airways — is an ideal place to talk about the engine’s brawn.

The GE9X has just passed a series of 1,600 grueling dust ingestion test cycles at GE Aviation’s test site in Peebles, Ohio. GE Aviation engineers injected a stream of fine dust debris straight into a demonstration engine to simulate some of the world’s toughest flying conditions. The verdict?

“We’ve pushed this engine to the limits of what it might experience in the harshest conditions that we can imagine,” says GE9X program manager Karl Sheldon. But when they inspected the inside of the engine with a tool called the borescope, the “images of the engine looked good. Its core looks excellent, and all components are functioning as expected.”

Proving the durability in dusty conditions is just the latest drill at Peebles, where the GE9X already spent the past several years completing rigorous tests to meet strict regulatory and industry requirements. Last year, the engine received certification from the U.S. Federal Aviation Administration (FAA), a key milestone in its journey to power the twin-engine Boeing 777X family. GE Aviation is the sole engine supplier for the planes.

“These dust ingestion tests aren’t even part of any certification effort,” says Sheldon. “We’ve now put this engine through more testing than any engine in our history prior to entry into service.” According to Boeing, the 777X is expected to enter service within the next two years. 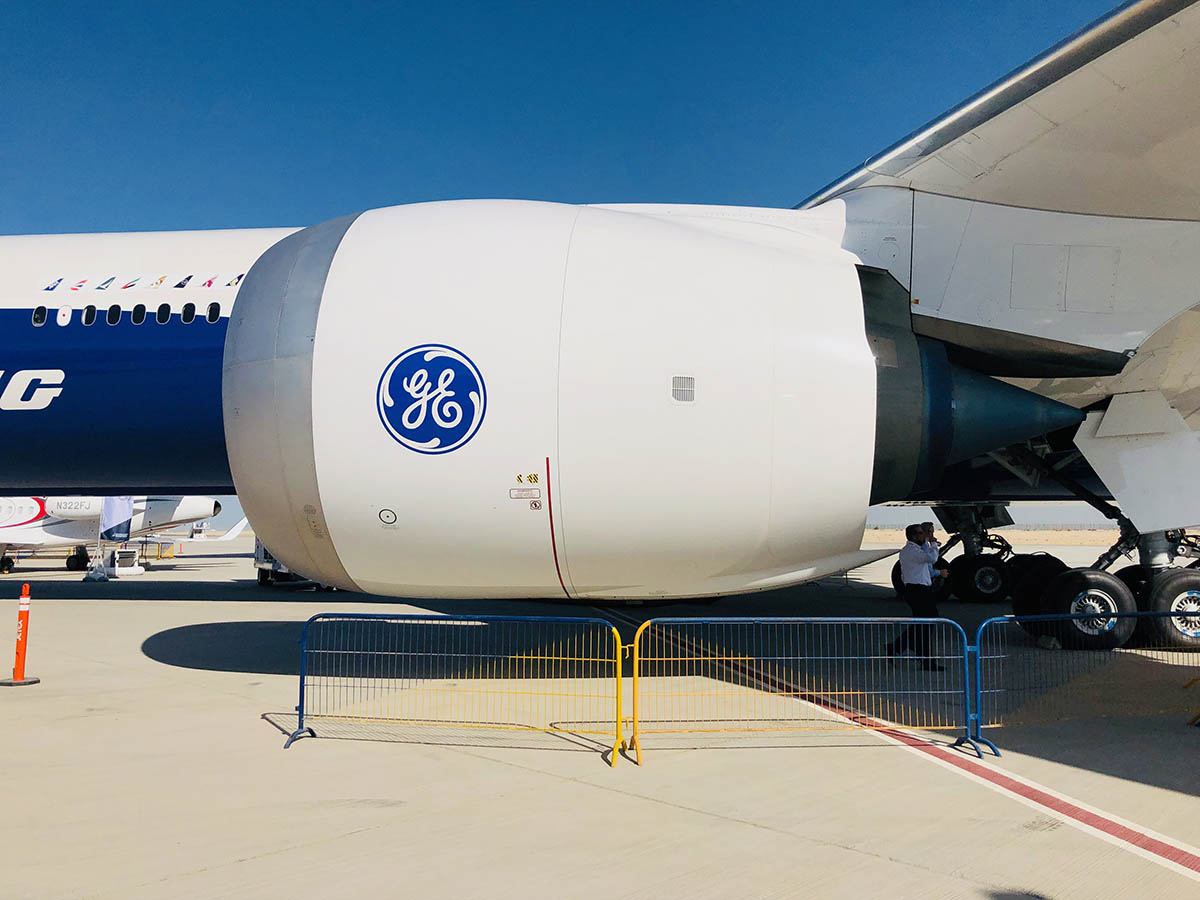 Dust can cause a slew of issues for jet engines, explains Eric Aho, GE9X systems engineering manager. Silt-sized airborne particles that sneak into an engine’s core, where the compressor, burner, and turbine are located, can wear down crucial components. This affects an engine’s efficiency and performance, meaning that the aircraft needs to burn more fuel to generate the same amount of thrust, thereby emitting more carbon dioxide.

The risks of ingesting a lot of dust is the highest during takeoff, because the first few thousand feet of altitude are relatively dense with particulate matter, Sheldon says. Takeoff is also when a plane’s engines run at full throttle, reaching temperatures over 1,000 degrees Celsius.  “At that level, the dust can melt and infiltrate into the system,” Aho says. The engine’s high-pressure turbine, which is just downstream of the combustion chamber and the hottest part of the engine, is particularly susceptible to the molten debris.

To demonstrate that the GE9X could resist dust throughout the entire flight “envelope” — takeoff, cruise, and landing — GE Aviation engineers used a special rig to simulate the volume, trajectory and velocity of airborne debris that the engine might encounter in a typical journey.

GE Aviation even manufactured its own dust in partnership with scientists from GE Research Center in Niskayuna, New York. Engineers positioned the rig in front of the GE9X, and the mighty engine pulled in the specially engineered dust.

In the bowels of the engine, an array of innovations and technology keep the dust at bay. This includes a 3D-printed particle separator, which sifts out dust from the stream of air, or flow path, that cools the turbine. “Traditionally, dust blocks those cooling passages and the blades heat up, leading to durability issues,” Sheldon says.

The lining of the GE9X’s combustor and turbine shroud is also made of next-generation materials called ceramic matrix composites (CMCs), which can withstand much higher temperatures than most metals.

The GE9X engine has passed the dust test at every stage of the flight envelope. “That’s important, because the flying environment and mission will wary widely from customer to customer,” says Sheldon. He uses car drivers as an analogy: “Some people might drive their car at 4,000 RPM, but others might be driving at a completely different speed,” he says. “There’s different wear and tear on the vehicle as a result.”

At GE Aviation, engineers are always thinking about new ways to test the limits of their design, see how they do, and get new insights from the results. They are conducting 3,000 cycles of additional ground testing on the GE9X to support Extended Operations (ETOPS) approval, a certification that permits twin engine aircraft to fly routes at a prescribed distance from the nearest airport that is suitable for an emergency landing. GE Aviation anticipates ETOPS testing to conclude in the first half of 2022.

“These tests help us set a baseline going into service,” Sheldon says. “We know what the customer is going to get.”