The Next Generation: A Team Of Young Engineers Helped Bring 3D Printing Inside The World’s Largest Jet Engine

Stefka Petkova enjoys building things. It’s a passion she’s had since she was a  small child when her dad, an electrician who liked to work on cars, kept the door to his workshop open. “I was exposed to that as a very young child and just got a lot of encouragement,” says Petkova, who she spent many afternoons watching him weld and wire automobiles.

Her childhood tinkering led her to study mechanical engineering at the University of North Florida, near America’s Space Coast, where she joined the school’s space club.  She traveled with the club to Cocoa Beach to watch the liftoff of Space Shuttle Atlantis in 2011, NASA’s final flight in its Space Shuttle Program. “At the Atlantis launch, we were able to go in the overhaul facility, touch the space tiles protecting the shuttles and talk to the engineers,” she says. “It was an amazing experience.”

Eight years later, her own career is soaring. She’s part of a GE Aviation team developing 3D-printed parts for the world’s most powerful jet engine, the GE9X, and preparing them for production.

Even though the engine doesn’t go to space quite yet, the GE9X is so wide at more than 11 feet in diameter, one of her father’s cars could easily drive through it. Thanks to 3D printing (also known as additive manufacturing) and other technologies, the engine is 10% more fuel-efficient than its predecessor, the GE90. GE developed the GE9X for Boeing’s new 777X wide-body jet, which made its maiden flight on Saturday. 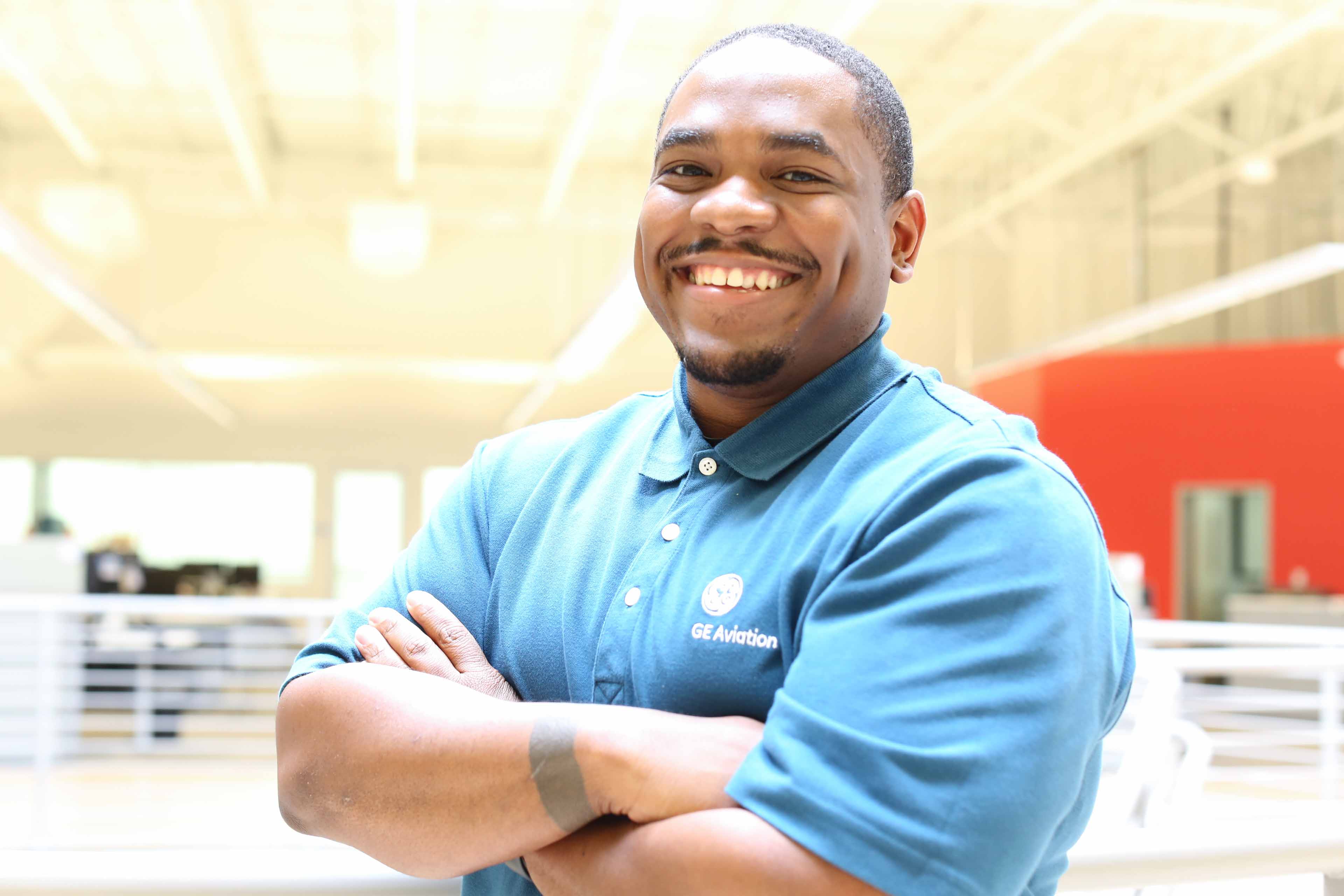 Top image: Stefka Petkova is part of a GE Aviation team developing 3D-printed parts for the world’s largest jet engine, the GE9X, and preparing them for production. Image credit: Stefka Petkova. Above: “The beauty and the value of additive manufacturing comes in the flexibility of design and the speed of innovation,” says Antroine Townes, site leader for GE Aviation's Additive Technology Center. Image credit: Alex Schroff for GE Reports.

Petkova joined GE as an intern while still in college. After graduation, she quickly progressed through the company’s Edison Engineering Development Program, a two- to three-year scheme for training talented engineers straight out of university. “It was highly technical, but I was learning engineering from the best,” she says. “It’s stuff, some of it trade secrets, that we would not get to learn at school at all.”

By 2014, Petkova moved to Cincinnati, Ohio, where GE Aviation has its headquarters. The company recently developed its first 3D-printed parts — a fuel nozzle tip for the CFM LEAP jet engine and a sensor casing for the GE90 — and Petkova was smitten with the technology. Today she is based at GE Aviation’s Additive Technology Center (ATC) in West Chester, Ohio, a short drive from GE Aviation’s headquarters. The center, which employs hundreds of engineers, designers and workers from GE Aviation and GE Additive, is possibly the largest and most advanced 3D-printing facility in the world. “It’s not hard to walk into this building every morning and go to work,” says Eric Gatlin, a general manager for GE Aviation focusing on additive manufacturing. “A lot of the things we do here, we are doing for the very first time. I think that breeds a certain amount of excitement, a certain amount of energy, and requires a certain culture.” 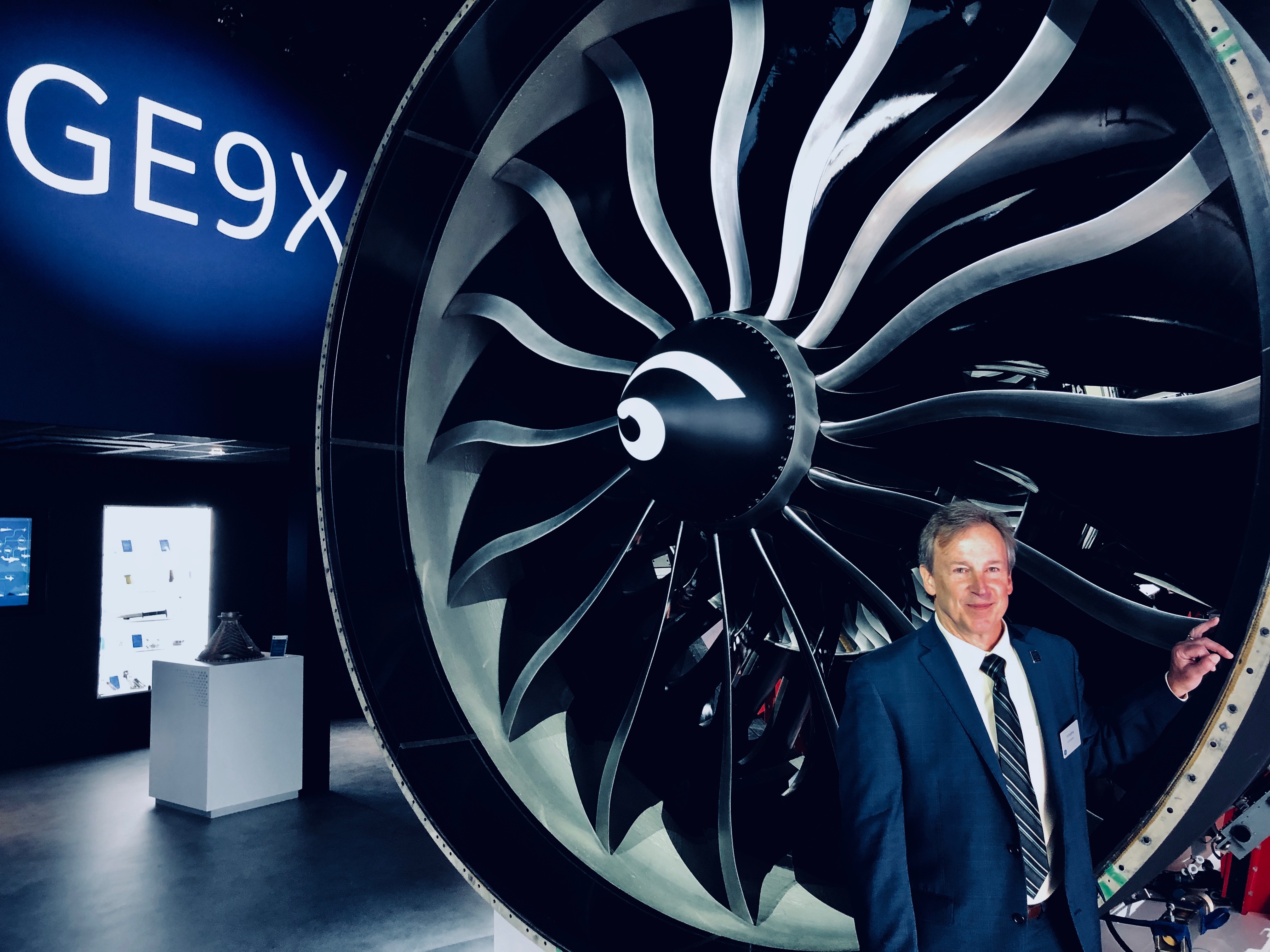 No kidding. Many of the engineers working here, even those in their 20’s and 30’s, didn’t study additive manufacturing in school — the technology was still too new — but that didn’t stop them from learning it quickly to help the rest of GE catch up.

At the ATC engineers can design parts with the most ideal shapes and then print them directly from a computer file. The technology works by fusing together thin layers of metal powder with a laser or an electron beam to make the final product. It allows engineers to make shapes that were previously too expensive or impossible to manufacture by traditional methods, like stamping or casting. “The beauty and the value of additive manufacturing comes in the flexibility of design and the speed of innovation,” says Antroine Townes, site leader for the ATC. “In the past, designers were trapped by the manufacturing methods available to them. Now you can take those limitations away and design the best thing for the engine, not the best thing for manufacturing.” 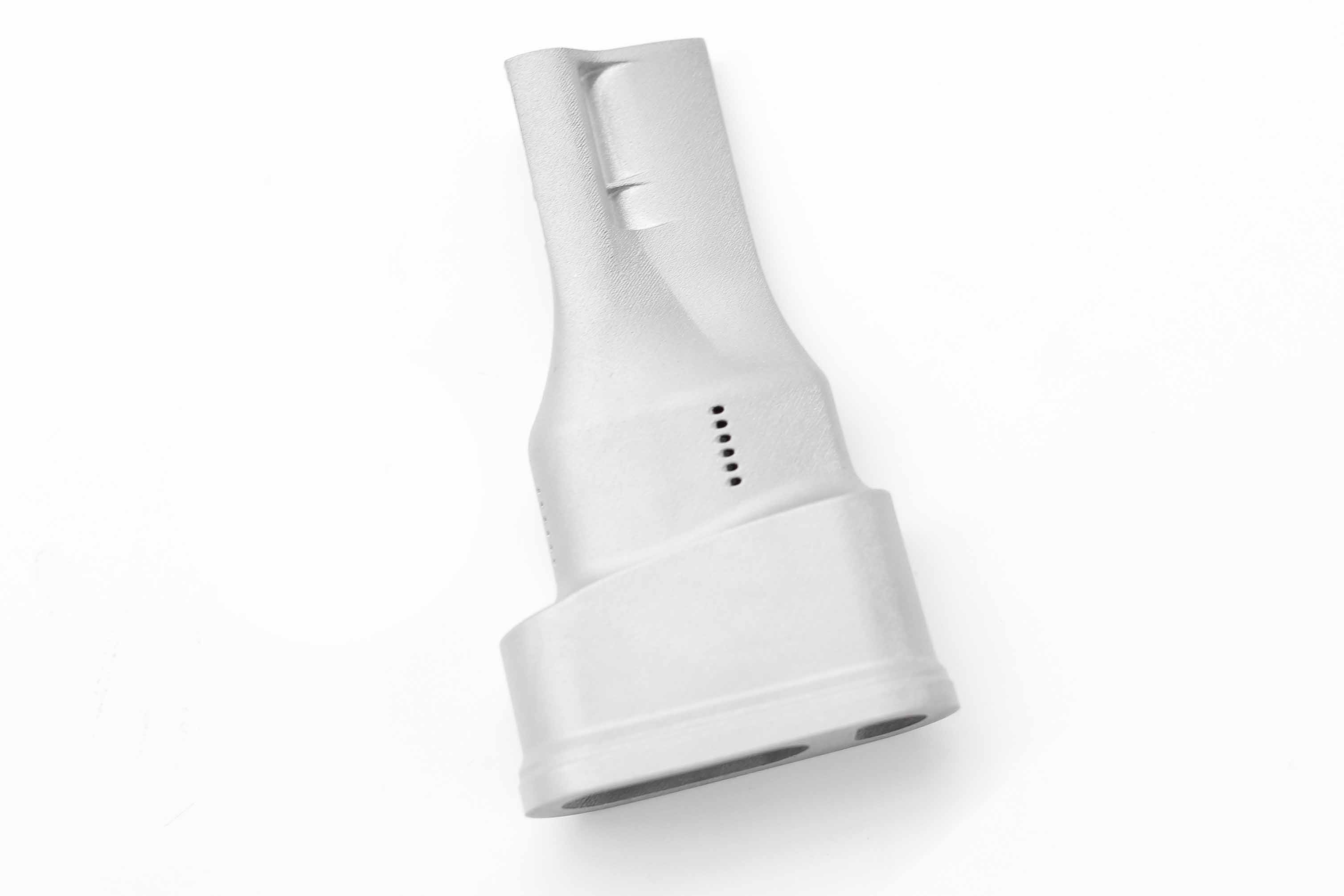 Townes, Petkova and their colleagues help prepare the 3D-printed parts for mass production, nail down the manufacturing process, and transfer it to GE Aviation’s additive manufacturing plant in Auburn, Alabama. But they also work closely with GE9X designers to help them quickly and inexpensively iterate and improve on their concepts as engine test results stream in.

The GE9X combined more than 300 engine parts into just seven 3D-printed components, including the fuel nozzle tip that precisely sprays a mixture of fuel and air into the combustion chamber, low pressure turbine blades and heat exchanger. Another, the inducer, helps pull out dust, sand and other debris the engine has ingested and extends its life. It’s so new — and hard to make it — that it has never been used inside a commercial GE jet engine before. “The inducer cannot be manufactured any other way, except by 3D printing,” says Zach Studt, senior manufacturing engineer at GE Aviation. “In this way, additive is unlocking performance of the engine. A different manufacturing process can deliver a better product. Going forward, most engines will probably come with some version of that inducer.”

But additive is even more powerful than that. It’s not only precise, but — given the complexity of the parts the process can produce — it’s also fast. Take a look at another component: the combustor mixer. It works like a carburetor in a car and helps the engine feed the right fuel-air ratio in the nozzle. In the past, GE made these mixers by pouring molten metal in a mold, a process known as casting. But building patterns and other tooling for the molds is slow and expensive — and its relative rigidity makes it hard for designers to make changes. But 3D printing can help, again. “It allows us to incorporate a redesign much faster than a lot of the traditional processes and we don’t have to compromise on design,” Studt says. 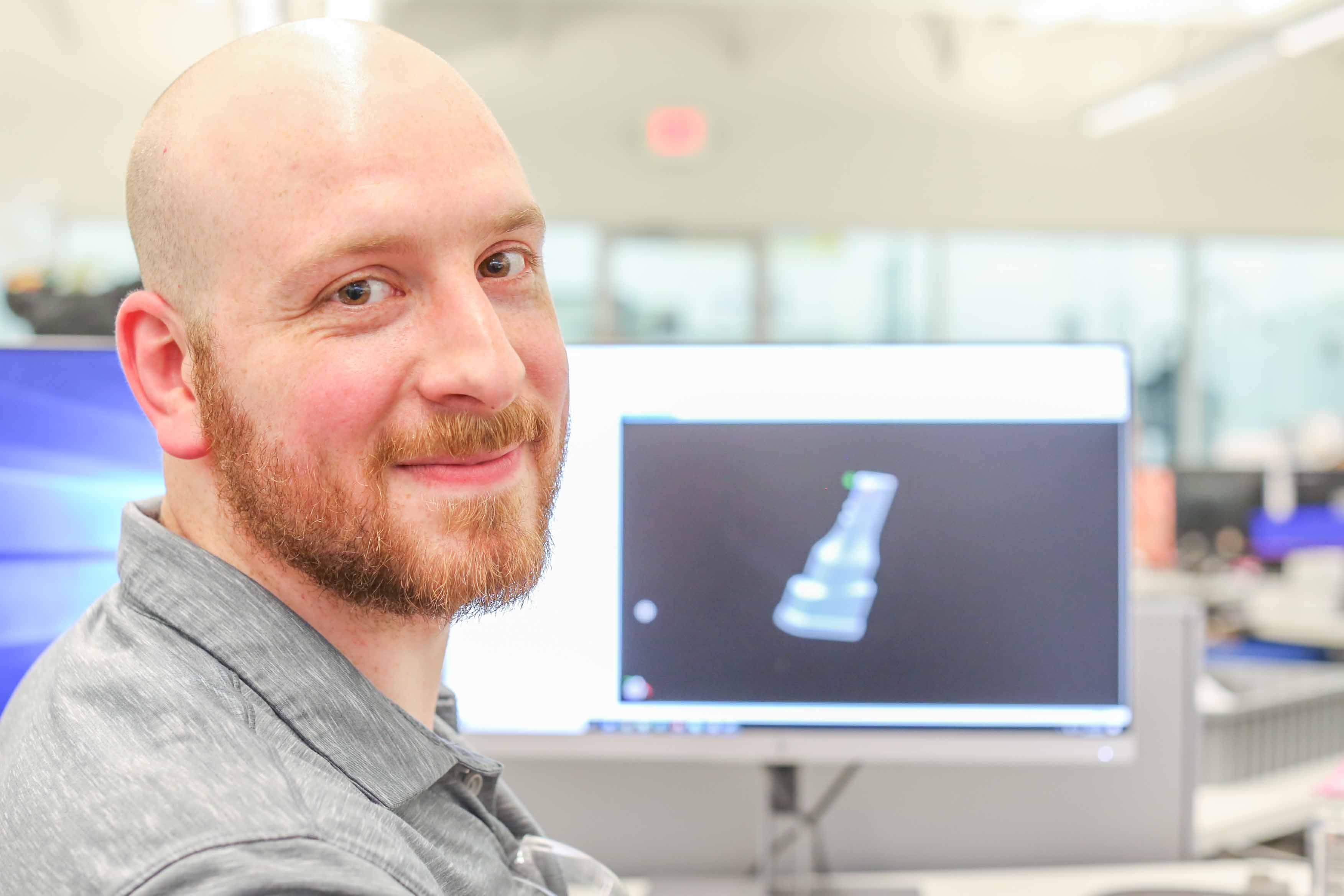 This is important because engine development and testing operate on a tight schedule agreed upon with the planemaker, in this case, Boeing. Additive manufacturing is handy, for example, when test results from the first test engine come in and the team is able to analyze the insights and make design changes in time to include them in the second test engine. “We've had a lot of different configurations and a lot of learning that we would not have been able to even fit into the schedule had we gone about it in any other way,” Petkova says.

At the ATC, the team prints parts for the GE9X, like the mixer and inducer, on machines from Concept Laser, a German company GE acquired in 2016 and folded into GE Additive. The low pressure turbine blades are made inside the Arcam printer, which GE also acquired the same year. Arcam also makes the metal powder used in printing. “We take advantage of being co-located in one building and help each other succeed, help GE Additive produce the best machines for the industry, but also help others at GE Aviation build the best engine parts,” Studt says.

The teams at the center are working closely with the engineers developing the Catalyst, the first new turboprop engine designed from scratch in 30 years. They used 3D printing to combine hundreds of engine parts into just a dozen or so. Says Petkova: “We’re going so fast. If you learn something, you can’t just say, ‘Oh, this doesn’t apply.’ You have to go in and say, ‘I’ve learned something, let’s make sure everyone knows about it” and we apply it to all of our programs. We don’t want that to be a stopper.” 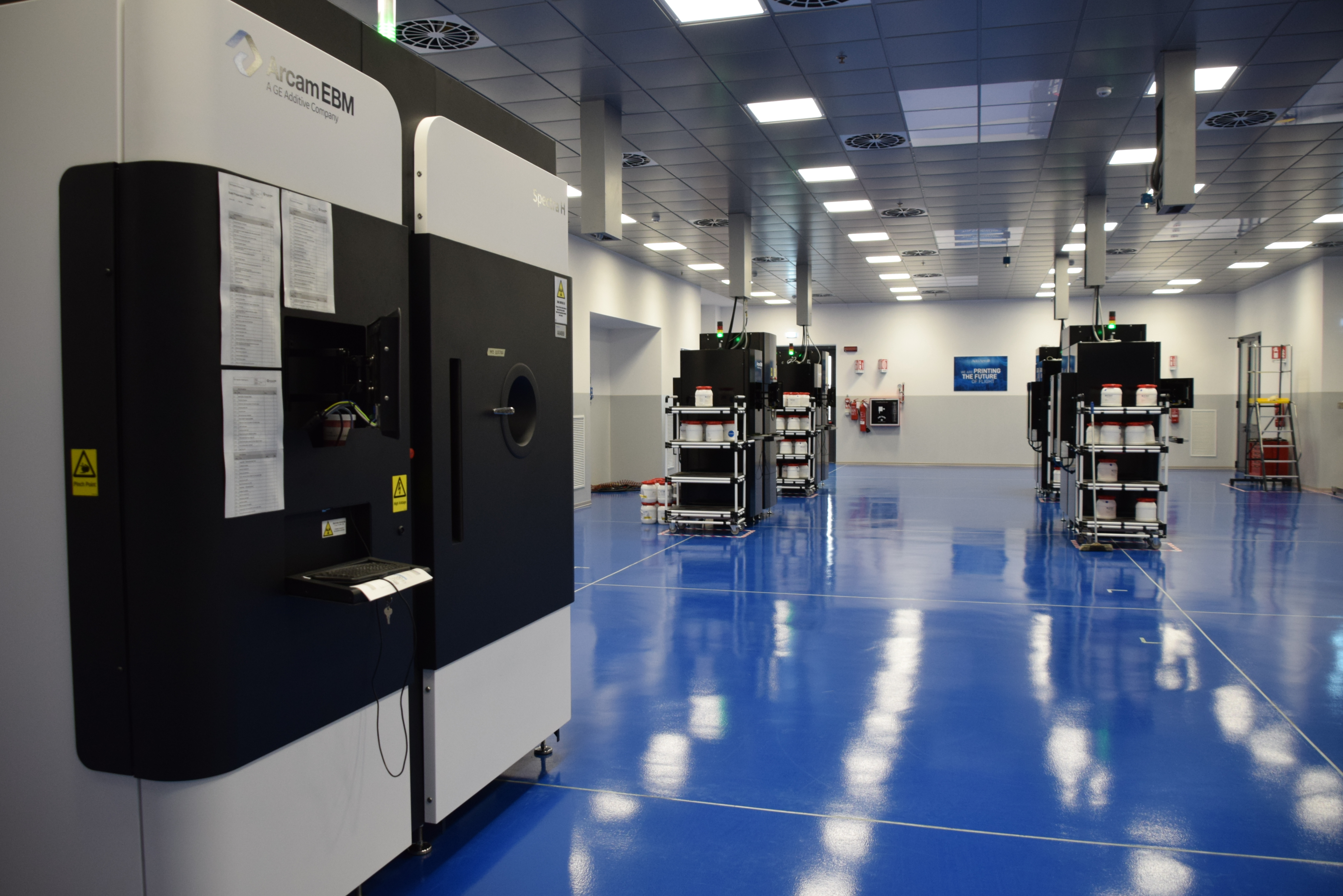