On The Frontlines: Journalist Mikey Kay Traveled The Globe To Show Healthcare's Response To COVID-19 Pandemic

Journalists relish finding stories hidden in unassuming places. For Mikey Kay, a reporter and filmmaker who set out in early 2020 to tell the story of the healthcare industry during the COVID-19 pandemic, one of those places was an orange and white building standing in a green field in the Indian state of Haryana.

Located some 70 kilometers northwest of New Delhi, the handsome four-story structure is the home of Kainos Hospital where clinicians dispense modern medical care to the local, largely rural population. Their mission, which didn’t stop even during the pandemic, includes caring for premature babies in neonatal intensive care units and keeping them alive with the help of ventilators and other equipment.

Some 3 million people live in the villages surrounding Kainos and not long ago this technology would have been at least two hours away. The lack of access to emergency care meant, in part, that as many as 70% of infants born extremely premature in the immediate region died, according to intensive care specialist Dr. Arvind Dahiya.

“Over 67,000 babies are born in India every single day. That’s one-sixth of the world’s childbirths,” Kay noted, referencing a recent UNICEF statistic as he pulled up to the hospital on his Royal Enfield motorcycle last fall. “And, tragically, every minute, one of these 67,000 newborns dies.” 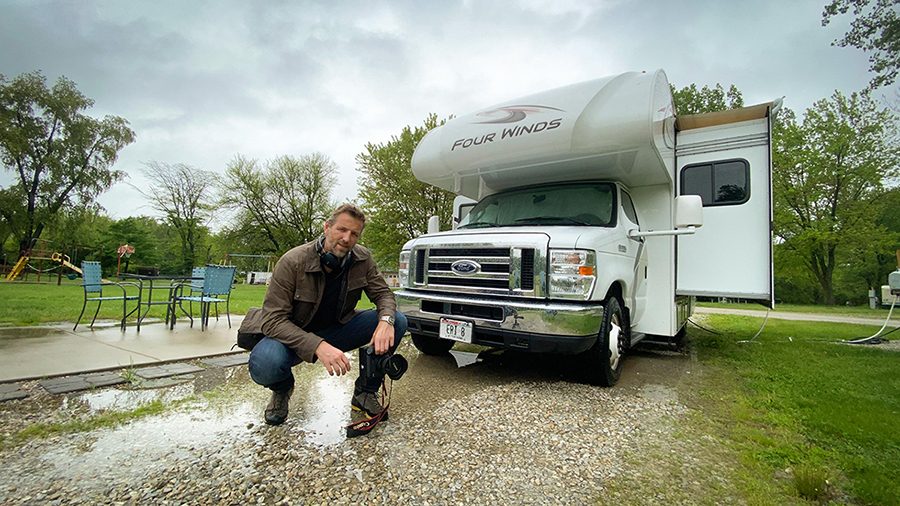 But when Kay visited the hospital, he found a different story. “Outside metro cities, neonatal care was not well structured,” Dahiya told him. After losing several family members because of the lack of emergency medical care, Dahiya had helped establish Kainos in the city of Rohtak in 2009. Since opening, the doctor told Kay, the facility had saved around 4,000 emergency care patients who would have likely died and reduced the rate at which extremely premature babies perish in the nearby region from 70% to 2%. Dahiya attributes this rate drop to local doctors now having confidence in local care and not outsourcing its patient care to Delhi.

The numbers alone make Kainos Hospital a successful example of modern medicine being delivered to the Indian countryside. But they are also a reminder that, even as the pandemic swept around the world, healthcare innovation continued to thrive. “What has struck me hard is the resilience of the professionals working not just on the frontlines but behind the scenes to make healthcare happen,” Kay reflected in his final report from India. “The fundamental need to access quality healthcare, it transcends us all.”

A former helicopter pilot with the Royal Air Force, Kay’s work as a multimedia journalist and filmmaker has focused on issues in crisis zones. He has reported on the effects of climate change in the French Alps and Greenland, the aftermath of terrorist attacks in Europe and energy issues in the developing world. Kay met Kristin Fallon, director of brand and digital marketing at GE Healthcare, on an earlier collaboration between GE and CNN in which he hosted a series of human-centered stories filmed in Pakistan, Ethiopia and the Middle East. Fallon learned of Kay’s documentary about his severely autistic brother, which aired on the BBC in 2019, and came to realize that he had the ability to both tell human-centered stories and operate as a one-man crew in unconventional situations. Fallon saw a gap in news being reported at the beginning of the pandemic and wanted to use video on social media to highlight the challenges of delivering healthcare during COVID-19 — and she knew Kay could deliver.

Kay’s background in the military, along with his work on television and as a crisis advisor, made him the ideal candidate to travel the world solo, shoot video, and interview front-line doctors, nurses, patients, ambulance paramedics and even the engineers who design the ventilators that have provided crucial relief to COVID-19 patients. Thus, a collaboration was born. Kay would interview and film during the day, and edit at night — a one-man show supported by a remote team managing logistics and planning stories. The result is “On The Frontlines,” a series of videos divided into three parts — so far — that began airing on social media in April and just finished its latest installment with Kay traveling across India.

Kay, who lives in Paris, France, began his trip last March. Living and working in a rented RV (which he nicknamed “Matilda” after a friend’s daughter), he started filming at a GE Healthcare ventilator factory in Madison, Wisconsin, just as COVID-19 was erupting in Europe and the U.S. “The logistics were really hard,” says Kay, who arrived in the U.S. the night before American borders were shut. “In a country that is shutting down rapidly, you just don't know what's going to happen from one day to the next.”

By October, when he finished shooting, Kay had ridden shotgun in ambulances in Italy and trekked to Jaipur, India, via motorbike — just two of the roughly 18 destinations in five countries he visited for the project. To get into India, which was experiencing a surge in COVID-19 cases in the early fall, Kay had to provide a negative virus test and then power through a 14-day quarantine inside an airport hotel room in Bangalore. The highlight of the two weeks in isolation? The food. “I’ve been looking forward to this for a long time,” says Kay while unpacking his first boxed meal in the India segment. “I am a massive curry fan.” 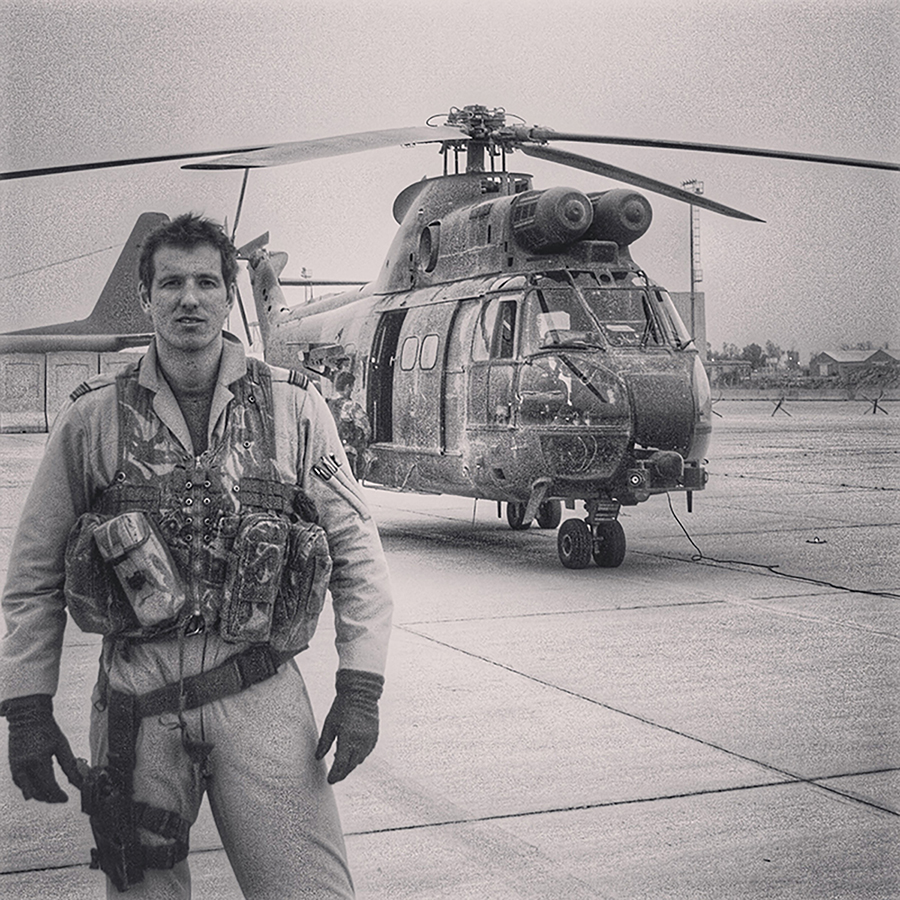 Watching “On The Frontlines” is a reminder of how much the world has changed in the last 11 months. In the first few episodes, set inside the GE Healthcare facility in Madison, Kay talks to Brian Kost, an engineer who came out of retirement to help GE speed up ventilator production to meet the growing numbers of COVID-19 patients in hospitals. “I’m still an engineer at heart,” says Kost, who retired two years ago from designing medical diagnostic imaging technology. “After 35 years, I’ve had a lot of highlights in my career but this will be one of them. Because it’s helping the world.”

Fast forward to the second part of the series, filmed five weeks later in Europe. Kay walks with Dr. Roberto Fumagalli in Milan’s hard-hit Niguarda Hospital as the head of intensive care tells viewers how his team reacted to wave after wave of COVID-19 patients, inventing treatment protocols as they went. Fumagalli’s description of how the loss of colleagues and friends affected his staff felt particularly poignant to Kay. At the time, he says, “no one was talking about PTSD of medical staff, doctors and nurses. That was a subject that wasn’t really being spoken about.”

The third part of “On The Frontlines” takes viewers to India, a nation of 1.3 billion people, most of whom live in the countryside. “India’s healthcare system is a bit of a paradox,” Kay says. On the one hand, Indians have access to some of the best doctors and medical technology in the world. On the other, rural Indians — who make up nearly three-quarters of the nation’s population — have access to just one-third of its hospital beds and often defer medical care because getting to a clinic or hospital takes too much time and costs too much money, according to a study by IMS Health.

Kay makes his way from Bangalore to Jaipur and ultimately to Delhi, traveling by motorbike, car, plane and tuk-tuk on a 5,000-kilometer journey, using a GoPro camera and an iPhone to conduct interviews and a drone to capture scenery. In one episode, he documents a new cancer hospital rising in the midsize city of Nagpur, in Maharashtra state, and hears how telemedicine is freeing up precious ICU beds in a part of the world that is embracing digital solutions at a rapid pace.

Throughout the entire series, GE Healthcare’s technology surfaces again and again. “To be completely honest with you, I had no idea of the footprint that GE had in the world,” says Kay, looking back on his work. “What this company has been doing and the effect that this company has been able to have, countering and ameliorating the effects of the pandemic, has been phenomenal.”

GE Healthcare’s business is big — it recorded $20 billion in revenues in 2019 — and covers many of the key technologies used in clinics and hospitals around the world, such as ventilators, imaging machines like X-ray, MRI and CT scanners. The challenge of bringing the latest medical technology to a fast-growing and modernizing nation like India stoked Kay’s natural curiosity.

“The main essence of the India season was about access to healthcare,” says Kay, who worked with Fallon and a team at GE Healthcare to uncover stories about the subcontinent’s digital leap in medical technology. “Well before COVID-19 came along, the engineers and scientists and doctors in GE’s innovation hub in Bangalore have been doing all sorts of brilliant work.”

Among the technology that surprised Kay was a lightweight battery-powered echocardiogram, developed by GE engineers in India, that can be carried into rural areas by a visiting doctor and can complete 200 scans on a single battery charge. Without the ability to hook up to a desktop printer, the team had to design a small built-in unit that would spit out the results of the scans, sort of like the ticket printer a train conductor holds while taking payment.

“I think the biggest thing, though, was just how much impact these innovations were having,” says Kay, recalling his visit to the neonatal ICU in Kainos Hospital, where doctors had reduced infant mortality substantially using modern diagnostic devices. “That is a massive impact.”