No Pain, No Gain: GE’s Newest Gas Turbine Went To Boot Camp As It Prepared To Join The Grid

Thomas Edison reportedly said that genius is 1% inspiration and 99% perspiration. In a way, that quote also applies to the latest version of GE’s HA advanced natural gas turbines used for power generation, the GE 7HA.03. Over the past three months, at a high-tech turbine validation facility in Greenville, South Carolina, GE’s engineers have subjected the 7HA.03 to hours of grueling workouts to test its durability and squeeze out every last decimal point of efficiency and power. All has been preparation for the upcoming commencement of commercial operations for two of the turbines at Florida Power and Light’s (FPL) Dania Beach Clean Energy Center in Fort Lauderdale.

The turbine was far from being a slouch, to be sure. It can now generate up to 430 megawatts (MW), enough to power the equivalent of nearly 900,000 US homes, achieves an industry-leading efficiency of 64% and is remarkably nimble, reaching full load in the time it takes to make a cup of tea. Still, as Cody Ford, the GE test director for the 7HA.03, says, “Customers invest millions of dollars in these turbines. We have to be able to say, ‘Yes, this will work for you, in your environment, with your fuel.’”

The turbine has chalked up nearly 500 hours during the tests. These exercises explored its “entire operational envelope” — or the range of parameters in which the turbine can operate safely and effectively. Every second, thousands of sensors gathered gigabytes of data the engineers used to understand engine performance efficiency.

While there are rarely big surprises, this type of testing can’t take place at the customer’s power station. Instead, it happens at what GE engineers describe as the toughest power-plant proving course on earth. “We can exceed the normal operational envelope and do these stress-inducing tests at Greenville because we’re not connected to the grid,” Ford says.

The 50-meter-long test bed at Greenville consists of six major components: starter motor, drive motor, torque converter, gear box, load compressor and the gas turbine. From above, it looks like someone has removed a huge car engine from its casing and then laid out the pieces in a giant metal crocodile.

One of the main tools in this torture chamber is the load compressor. It applies load to the gas turbine in a similar way to how a generator would at a power plant. At the touch of a button, the compressor draws in huge volumes of air, pressurizes it and feeds it into the combustion chamber at hundreds of kilometers per hour. “We can use the compressor to simulate pretty much everything that a customer might do on-site,” Ford explains. For example, engineers used the load compressor to quickly ramp up to baseload, which is the term for the full 430 MW that the 7HA.03 can dispatch on a continuous basis. This ability to ramp up and down quickly and safely is increasingly critical for utilities. Renewable energy is becoming pervasive on the grid, and FPL alone has plans to install 30 million solar panels throughout Florida by 2025. But when solar or wind power drops off, operators must quickly find a new power source to meet demand and prevent outages. 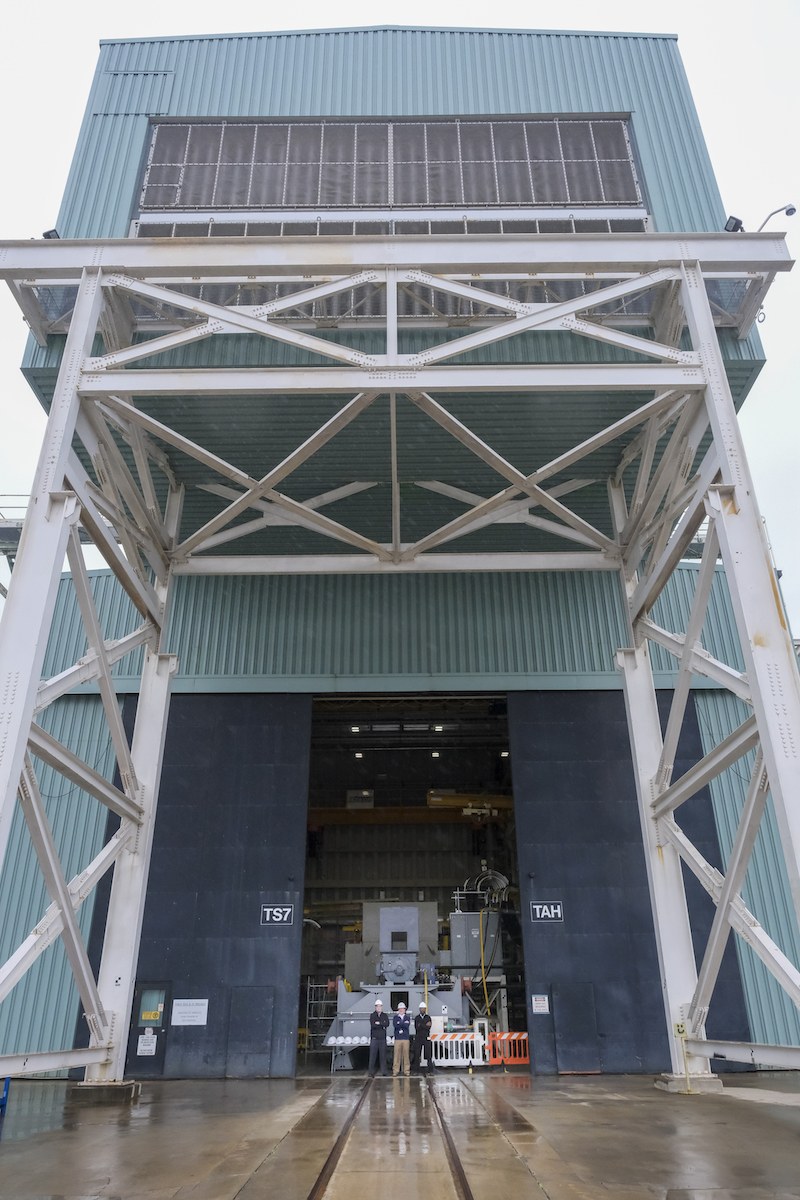 Looking at the list of tests, Ford especially likes the “speed sweep” workout, in which engineers push the turbine from nominal speed all the way up to 110% of its rated rotation, and then back down again. It’s a bit like removing the RPM limiter from a car and then revving the engine at full throttle. “We’re validating blade response,” he says. At certain frequencies, blades can resonate or begin vibrating like a car window at certain highway speeds. Resonance is a form of vibration that can occur spontaneously, just like car windows can start to buzz all of a sudden at a certain speed on the highway.

Engineers also tested the 7HA.03’s versatility in extreme environments. The turbine will debut in the humid, subtropical Florida climate, but the machines must endure temperatures at both extremes, from the subarctic steppes of Alberta to the broiling desert heat of Saudi Arabia. Engineers simulated these conditions by changing parameters within the test facility.

The Greenville proving grounds also allowed GE to reinvent gas turbine testing. Chris Corron, a product manager for the 7HA.03 who has racked up 32 years at GE, says that the old standard for testing a gas turbine’s reliability was 8,000 generation hours, or a full year of continuous operations. But the test stand allowed GE to rewrite the rule book. “We can do much more concentrated, harsher testing at Greenville,” he says.

For the customer, FPL, which is owned by NextEra Energy, the testing showed that the 7HA.03 provides the lowest-cost conversion of gas to electricity in the 60-hertz industry. That could save the utility up to $337 million over the full life of the Dania Beach power plant project, according to the project partners. “We’ve made small adjustments, but we haven’t had to make any major changes to hardware or the hot gas path,” Corron says. “We really have to take our hat off to the engineering teams.”

“This project is the result of exceptional teamwork among FPL, [field services company] FieldCore, GE’s on-site teams, and our test stand’s engineering and testing teams,” says Amit Kulkarni, head of product management for heavy-duty gas turbines at GE Gas Power. “To be able to deliver such an incredible package of technology — safely and on time — is a testament to what we were able to achieve together and will unlock new levels of power-generation stability, emissions performance and reliability across the FPL power plant.”