The endeavor to get unmanned aircraft to coexist safely in the sky with planes and other “manned” flying vehicles took a significant first step recently as a group of researchers, engineers and pilots gathered in upstate New York. For the first time they successfully tested drone flights integrating next-generation airborne collision avoidance system (ACAS X), which is being developed by the Federal Aviation Administration (FAA).

When the FAA’s Traffic Alert and Collision Avoidance Systems (TCAS) Program Office began designing an improved collision avoidance system a decade ago, drones were largely used by the military and deployed in war. But the popularity of drones, or as they are formally called, small unmanned aircraft systems (sUAS), has ballooned since. According to FAA estimates, some 7 million unmanned aircraft might be flying in the U.S. skies by 2020, compared to just 320,000 manned aircraft.

The potential economic benefit from drones is huge – perhaps $46 billion by the middle of next decade, according to an analysis by McKinsey & Company. They are already being used to inspect power lines, refineries and other industrial assets, and to crop-dust farms. Future applications may include package and even passenger delivery, as in the urban air mobility ecosystem. Foreseeing the need for manned and unmanned aircraft to share the skies safely, the FAA is looping in a good portion of the aviation industry to tackle the infrastructure and technological challenges all those buzzing ”small” vehicles require.

Gathering in late October at Griffiss International Airport in Rome, New York, at the center of New York state’s drone testing zone, GE’s flight operations team — including experts from GE Aviation, GE Research and AiRXOS, a new GE subsidiary that offers support services for the drone industry — conducted 53 flights of various drone configurations, distances and situations. Over five days, they demonstrated the ability of drones to avoid each other and for unmanned vehicles to adjust their paths to stay well clear of manned aircraft flying through the zone where the vetting took place. 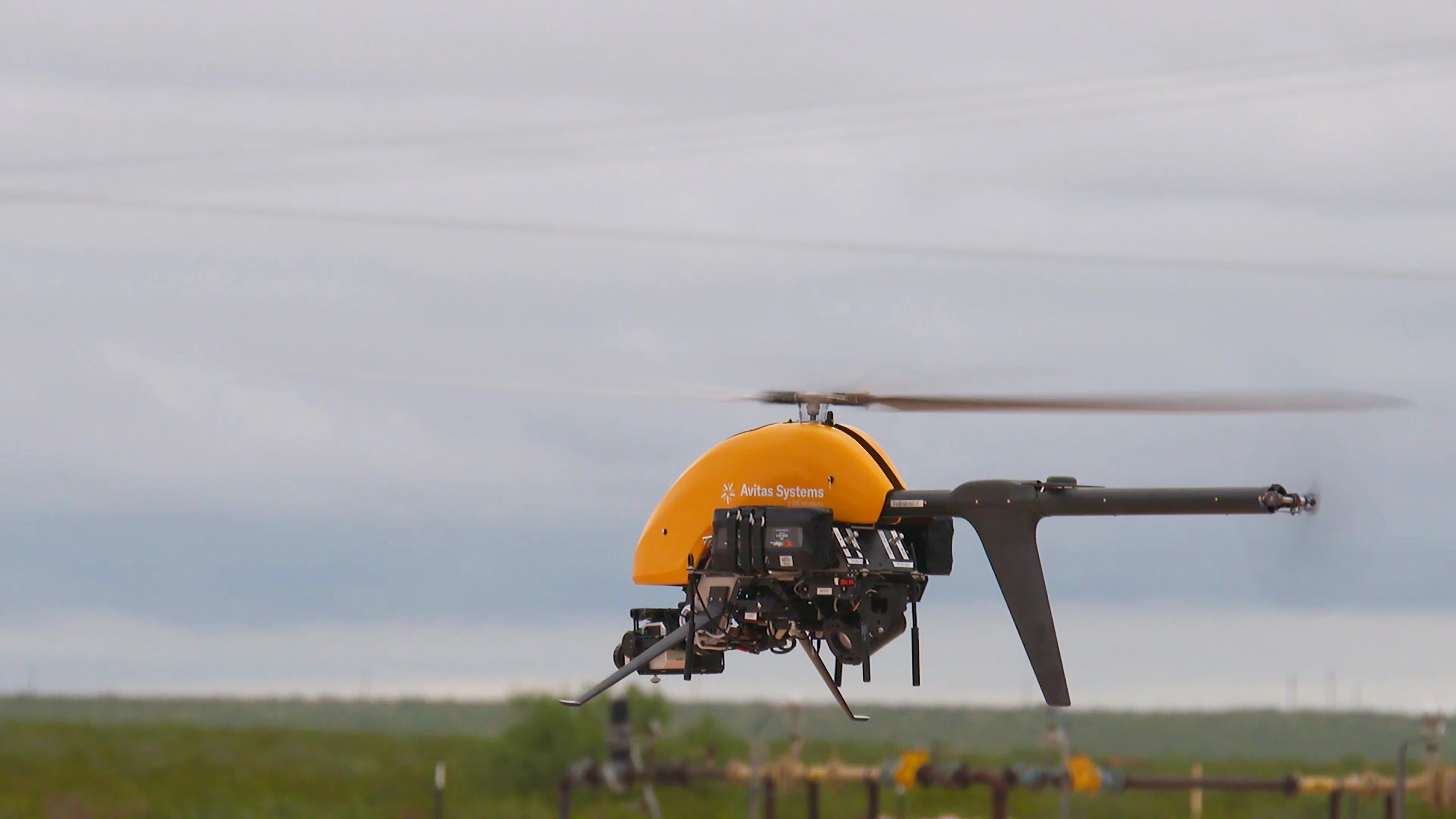 GE and partners demonstrated the ability of drones to avoid each other and for unmanned vehicles to adjust their paths to stay well clear of manned aircraft flying through the zone where the vetting took place. Above image credit: Avitas Systems. Top GIF credit: GE Reports.

At October’s demonstration, engineers tested a series of ways for aircraft of all types to share airspace, with air-based warning systems as well as ground-based systems, both of which will be needed for the variety of aircraft that will use the skies in years to come. In addition to testing performance of drones flying at each other, overtaking one another and approaching at various angles, scientists also had to test how drones receive and act upon information with themselves and through their operators on the ground, who may or may not have the craft in their line of sight.

Higher-end drones have the ability to carry beacons and powerful computers onboard, similar to manned craft. This allows them to detect interference, like a tree or telephone pole.

Some lower-end drones, however, can lack onboard computing power or sophisticated sensors and have to receive signals from ground systems. This means the detect-and-avoid capability needs to come from the overall infrastructure in which they are flying.

That’s why in addition to running ACAS sXu — the newest addition the ACAS X family designed specifically for small unmanned aircraft — on board of the drones themselves as a self-contained capability, one other objective of the October demonstration was proving that small drones can receive alerts and advisories from ACAS sXu running in the cloud midflight. That’s similar to how your mobile phone map app receives reroutes on the fly, but in a more dynamic manner and at a much faster pace, according to Liling Ren, principal scientist at GE Research who was in Rome for the testing.

While not the only organization involved in the ongoing effort to open up the skies, GE has been playing a vital role in achieving this milestone. Among the many components that contributed to the ACAS sXu effort are an intelligent avionics platform called M100, integrated flight controls including the autopilot and the flight manager, the ground control station and a robust Edge operating system that allows for software like ACAS sXu to be deployed on drones and literally updated on the fly.

The group also used GE’s cloud-based autonomous service platform to provide ground radar surveillance services and advisory and alert services to vehicles by air-ground communications links. GE and Fortem Technologies, also on-site, helped demonstrate the interoperability of different manufacturers’ systems and protocols, an essential step to prepare for the adoption of ACAS sXu by variety of sUAS designs and configurations.

There are still more steps to be taken, not least a thorough FAA review of the data collected, but October’s demonstration was a milestone years in the making. “This is probably the first time somebody put this technology in an airborne asset and flew it around while also having vehicles that were doing detect-and-avoid that didn’t have the tech deployed in the airborne asset,” says Andy Borgyos, principal product manager of intelligent avionics for GE.

“The successful flight test was not only a demonstration of technologies themselves. More importantly, it demonstrated how the power of integration between the GE entities can enable us to achieve technical and business goals,” adds Mike Madden, senior business operations manager of avionics and digital systems growth for GE Aviation.