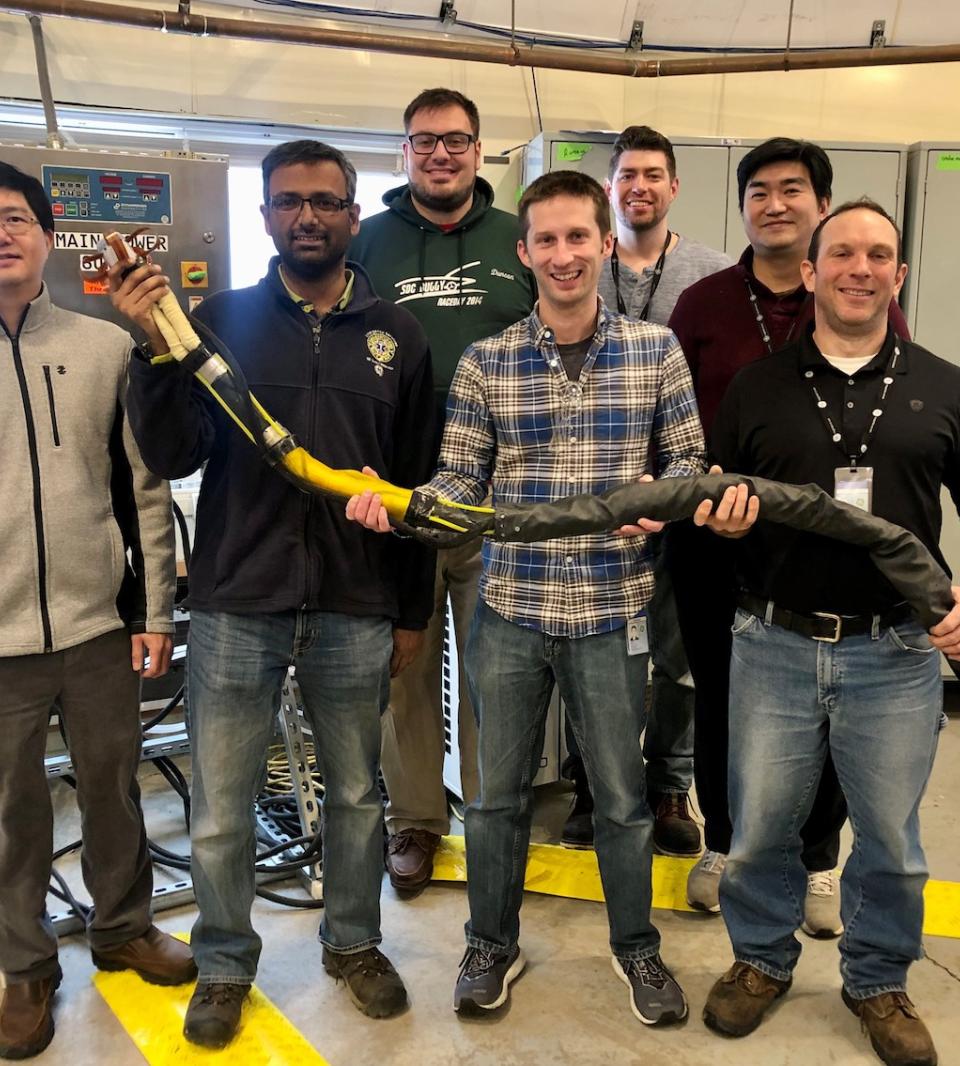 Some of us might feel like we spent the past two years living under a rock. GE researcher Deepak Trivedi has been working there.

Last July, GE Research was one of three teams to complete the Defense Advanced Research Projects Agency’s Underminer program, a 15-month, $2.5 million challenge to develop technology for rapidly digging tactical tunnel networks. Trivedi and his robotics team demonstrated a wormlike robot that could burrow its way through rocky terrain, without help from above or leaving telltale piles of dirt in its wake.

Based on the results of the autonomous robo-worm they demonstrated, DARPA posed a new challenge.

“The agency asked us, ‘Hey, is it possible to use this to actually navigate complex irregular networks of pipelines with flowing water? And by the way, you have three months to show the whole thing,’” says Trivedi, a mechanical engineer at the GE Research campus in Niskayuna, New York. “We accepted the challenge.”

So began a late-summer sprint to redesign the literally groundbreaking, earthworm-inspired prototype into the Programmable Worm for Irregular Pipeline Exploration, or Pipe-worm. The soft robot — named for a field of robotics that employs flexible materials for greater freedom of movement — could be used for a range of commercial and industrial applications, such as pipeline monitoring, sewer inspection and power turbine repair.

At 2 inches in diameter, Pipe-worm’s predecessor was already a feat of robotic engineering. Armed with a nose suitable for digging, the soft robot was able to burrow into the dirt and dig a 100-foot tunnel, navigating around rocks and other obstacles. For the next iteration, the Robotics team’s challenge was to improve the wriggly bot’s flexibility, so it would be able to turn 90 degrees at pipe joints without getting stuck. They also added new sensing capabilities and souped up its artificial intelligence so it can use that extra sensing to navigate its environment and make on-the-fly route decisions.

The fundamental mechanics of the worm are mostly unchanged from the original version. A series of bladders, designed and provided by InnoVital Systems, an advanced technology company serving the defense and health industries, make up the worm’s muscles. When filled, the muscles expand in width and contract in length; when deflated, they thin out. (The current design fills the bladders with air, but future models could use any number of gases or liquids.) Inflating and deflating the artificial muscles in a precise sequence creates a wavelike motion that inches the worm forward or back.

But the Pipe-worm has to do more than crawl. It also has to bend and straighten, as well as anchor itself inside whatever pipe it’s exploring so that if water (or gas or waste) should come rushing through, it won’t flush the robot along with it.

The muscles accomplish these goals in two ways. To anchor itself, the Pipe-worm can inflate to more than twice its starting diameter, so that some portion is always in contact with the full circumference of the pipe. When the front of the worm is anchored, the trailing muscles inch up. Then the tail anchors while the front extends forward. In demonstrations, the robot blew itself up to fill a 4.5-inch pipe, which is big enough to carry fiber-optic conduits for 5G networks. The machine could be scaled up for larger pipes, such as sewers and water mains.

When the Pipe-worm encounters an elbow or T in the pipe, muscles on one side inflate, while those on the other side don’t, allowing the robot to curve as much as 90 degrees. Combined with the gravity-defying anchoring ability, this enables it to not just turn left and right, but also crawl straight up or down as needed.

And how does it know when it’s time to turn? That’s where its new whiskers come in. Inspired by the antennae cockroaches use to navigate nooks and corners, Trivedi replaced Underminer’s nose with numerous flexible sensors that feel along the length of the pipe as the robot travels. And so can Pipe-worm itself, with its onboard processor. That means it can explore uncharted networks without any help from above, make its own decisions about which way to turn and even create a full three-dimensional map of its route in the process.

In Niskayuna, the robot successfully traveled more than 100 meters of serpentine pipe with multiple diameter and altitude changes.

From the defense agency’s perspective, the ability to rapidly bore tactical tunnels could help resupply troops as they rapidly move through an area, and with rescue missions. GE has a more prosaic target in mind: fatbergs. These are congealed masses of cooking grease, “flushable” wipes and other unsavory leavings that clog sewer systems from London to Los Angeles. Sewage clogs cost U.S. municipalities $1 billion a year, according to the National Association of Clean Water Agencies. A giant Pipe-worm outfitted with a larger version of the original tunneling tool could help bust a fatberg to pieces.

Trivedi’s team is also exploring a range of commercial applications, from inspecting electrical conduits to welding cracks in chemical or fuel supply lines.

“We have demonstrated that it can also walk opposite the flow of water, so that opens up the possibility of doing inspections and repairs and cleaning of pipes without [having] to shut down an entire pipe network,” he says. Pipe-worm “can actually live inside the pipe and just keep walking around inspecting it or repairing it.” (The prototype relies on tethers that supply power, but future versions could be wireless.)

The Pipe-worm could also find jobs all over GE, inspecting miles of heat pipes in power plants, or repairing wear and tear in jet engines. And Trivedi has ideas for how non-military parts of the government might put Pipe-worm to work, but for now those talks — like Pipe-worm itself — are staying underground.