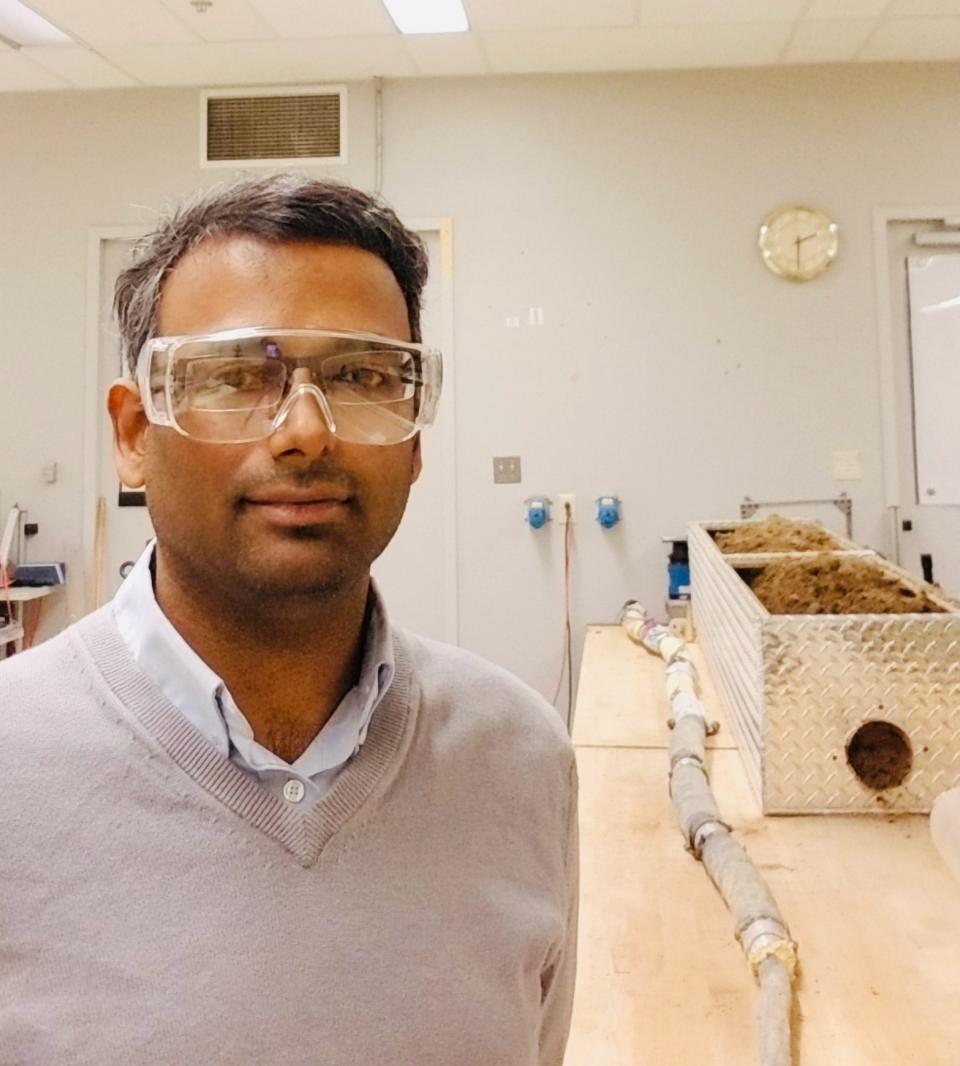 With the suppleness of a gymnast and the strength of a football player, a robot in the shape of a giant earthworm recently slithered through and around dirt, small rocks and tree roots. The tunnel it dug was comparable to the typical trenchless methods used today, but the journey marked a significant milestone for the prototype: It demonstrated the feasibility of using a so-called soft robot to burrow autonomously through tough terrain quickly and without breakdowns.

“The ability of GE’s robot prototype to operate reliably during testing in rugged, extreme environments is, to our knowledge, a first in soft robotic design,” says Deepak Trivedi, a pioneer in the field who led the project at GE Research’s testing site in Niskayuna, New York.

Trivedi and the robotics team at GE Research developed the 6-foot-long, 2-inch-wide robot as part of a $2.5 million, 15-month project funded by the Defense Advanced Research Projects Agency’s Underminer program. A machine like the earthworm robot could one day save lives by helping, for example, to resupply troops, a job that can now expose soldiers to enemy fire at moments when they are least able to defend themselves. 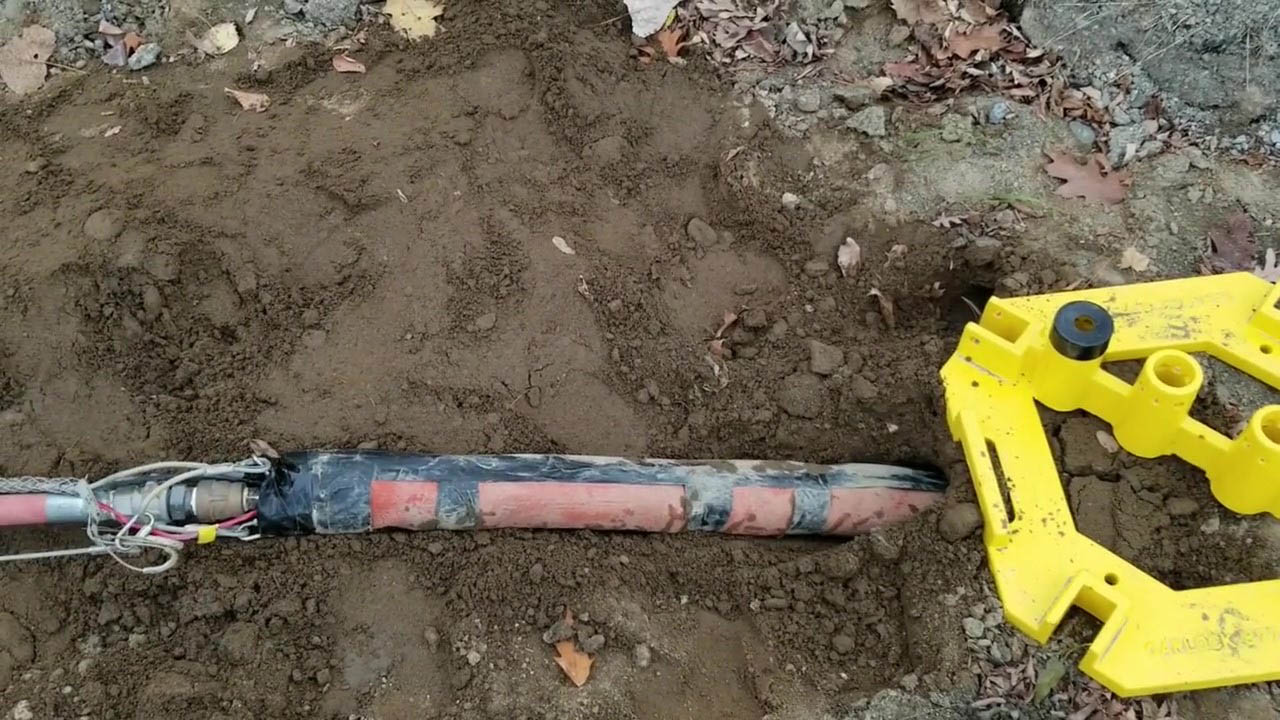 By slicing through an array of obstacles to carve a tunnel 10 centimeters (4 inches) in diameter, the GE robot worm has shown the potential of the technology to do the job, and opens “a whole new world of potential applications that go well beyond commercially available technologies,” Trivedi says.

The goal of soft robotics is to give devices many more degrees of freedom in movement than conventional robots. With no joints or bones, soft robots have the dexterity and flexibility to make sharp turns, squeeze through small, confined spaces and even pick up and move objects of vastly different shapes or sizes. These designs are often inspired by nature, seeking to mimic the movements of structures like octopus tentacles and elephant trunks.

For this project, GE scientists drew their inspiration from one of the most proficient tunnel diggers, the earthworm. They are tiny but mighty. They can dig though the dirt and leave behind a tunnel twice their diameter. And because the robot compresses soil along the hole’s walls as it inches forward, it can move without needing to remove any land it’s pushing through.

The GE team’s design grew out of Trivedi’s deep expertise. He became fascinated with soft robotics during his years as a graduate student at Pennsylvania State University, which he attended after coming to America from Delhi, India, in 2004. There, he co-wrote a seminal paper in this branch of robotics and worked on a DARPA-funded project to build a mechanical arm that resembled an octopus’s tentacle. “This was some of the earliest work that started the field,” he says.

The worm prototype digs and moves forward with a piloting tool on its nose, which stirs and softens the earth. As the ground loosens, the inside of Trivedi’s worm begins to churn. Mimicking the earthworm’s internal dynamics, fluid flows in and out of the many internal chambers that act as muscles, flexing and pushing the robot forward as pressurized fluid courses through. The robot’s skin, made of a fiber-based mesh, resembles an earthworm’s exterior, providing a durable shield that can bend and protect the fluid-filled chambers from the gritty subterranean environs.

InnoVital Systems, an advanced technology company serving the defense and health industries, worked with the GE Research team to design and supply the fluidic artificial muscles. During testing, the artificial muscles exceeded the state of the art in scale and pressure capability — key factors in achieving higher degrees of ruggedness and performance in extreme environments.

Trivedi even deployed his knowledge of tree roots — they exert varying force under different conditions — to gauge the amount of pressure his worm’s muscles need to apply as they burrow. The expanding muscles not only provide an anchor but also compress the surrounding dirt, which gives the tunnel some structural integrity as it forms.

GE’s expertise in healthcare and aviation also came into play. Like an aircraft, the robot tracked its own movements as well as its force, angle and position.

The Underminer team is looking forward to exploring other potential use cases with this type of rugged, autonomous soft robotic design. The team sees many possibilities beyond the battlefield, including the inspection and repair of jet engines and major power generation equipment. In fact, Trivedi is currently working with GE Aviation to explore different soft robotic designs for many other applications.

“In the future, we want to enable deeper, in situ inspection and repair capabilities that would enable more on-wing inspection and repairs, or enable major power generation equipment like gas and steam turbines to be inspected and repaired without removing them from service for lengthy periods of time,” Trivedi says. “The advancements we have made on this project support key developments needed to make that possible.”

This is not the first time GE researchers have looked for inspiration in nature. One scientist, for instance, has been studying butterfly wings to develop better sensors.

“There’s something beautiful in understanding these soft structures,” Trivedi says, “in addition to being able to make something really cool, really fast.” Robots both huge and infinitesimal can change along with the problems they’re built to address. “Some of these new ideas,” he says, “open up an entirely new world for exploration and innovation.”