In March, employees from GE’s grid operations — they work with utilities and other customers to bring electricity to consumers around the globe — were set to gather in Florida. The meeting was a kaizen, a working session associated with the legendary system of continuous improvement known as lean. Lean is at the heart of GE’s business transformation. GE has applied it in factories to untangle supply chains, for instance, and fix production lines, but it can be equally powerful within the office for project management, software development and other commercial challenges. Kaizens and other hands-on steps in the lean journey are meant to identify problems, find their root causes and figure out ways to eliminate them. But a problem presented itself even before participants could gather in Florida: The COVID-19 pandemic and lockdowns prevented them from getting there. Could lean work as well online?

Virtual awakening: That was a dilemma, given the problem-solving power of people working in the same room together. Virtual kaizens, said GE Digital’s Paul Sloup, had to “replicate that intent, which is to tap into people’s creativity and their problem-solving skills, but also to draw out of people their ideas and their thoughts.” Sloup and colleagues settled on a whiteboard software that made virtual collaboration easy, and soon found that, despite the challenges, the online method yielded surprising benefits: instant digital storage of ideas and insights, for instance, and the ability to share them with more people. “I would never have been able to scale a physical event that easily in that way,” Sloup said. Now, even when in-person kaizens return, the GE team will be able to add virtual tools that will enhance the experience — and help the problem-solvers solve problems.

Find out about lean lessons learned during COVID-19 here.

When she was a kid, Lauren Duncan was crazy about “Star Wars” and space travel, and knew she had a career in aviation ahead of her. But back then, as someone who identified as transgender, getting to live as a woman seemed light years away. These days Duncan is not only an engineer at GE Aviation — she’s also the global transgender advocate for the company’s Gay, Lesbian, Bisexual, Transgender & Ally (GLBTA) alliance. Duncan joined GE in 2011 and came out as a woman during a job rotation a few years later, to the support and encouragement of friends, colleagues and managers — though she still sometimes struggled to defend herself to the wider world. It was a colleague who encouraged Duncan to become a strong, visible LGBTQ ambassador: “That really resonated,” she recalled. “I wouldn’t say I came out again, but I let go of that notion of hiding. This is my journey, I’m not like everyone else, accepting that is OK and makes me who I am.”

Pride in her work: As Pride Month came to a close, Duncan was reflecting, in turn, on the leaders who’d come before her — like the trans women of color who helped spark the modern LGBTQ movement — and sees parallels to the Black Lives Matter rallies that are ongoing today. Looking back at her journey, Duncan says she would tell her younger self that “not everyone will accept you, but at the end of the day, you control your own destiny and write your own future. You deserve to be who you are and as long as you love yourself and continue on the path you choose for yourself, you will find the people that accept you and you will get to live your life.”

Learn more here about how Duncan is working to make GE as welcoming and inclusive as possible.

MAKERS ON THE MOVE

The chain reaction began with Kathy Armijo Etre, vice president of mission for New Mexico’s oldest hospital, the Christus St. Vincent Regional Medical Center in Santa Fe. Etre normally sets up programs for homeless and other vulnerable populations, but in March she faced a new trial: the COVID-19 pandemic, and her hospital’s need for personal protective equipment. Etre called an acquaintance from the state’s maker community who put her in touch with Sherry Lassiter, who runs the Fab Foundation — a spinoff of the Massachusetts Institute of Technology that promotes digital fabrication technologies, and also partners with the GE Foundation. Up and down this informal supply chain, folks had brains, skills and resources — and knew they could engineer a solution to the shortage Etre anticipated.

Facing it head on: Lassiter connected with MIT professor Martin Culpepper, who had designed a flat, clear piece of plastic perforated so that it could be easily folded into a face shield that would help protect healthcare workers against COVID-19 infection. Culpepper arranged for the production of thousands of the pieces — and, in early May, donations started arriving in New Mexico, courtesy of the Fab Foundation and the GE Foundation. And not a moment too soon: The gear came just as Christus St. Vincent needed to prep for a coming surge through the region’s Native American reservations. Lassiter sees the arrangement as a model for how foundations and hospitals can partner with the maker movement and communities in need. “This is first time we’ve done anything like this,” she said. “It’s amazing, fascinating, overwhelming and incredibly exciting in terms of the way it points to the future.”

Learn more here about the shields — and the specific challenges of treating patients in rural New Mexico. 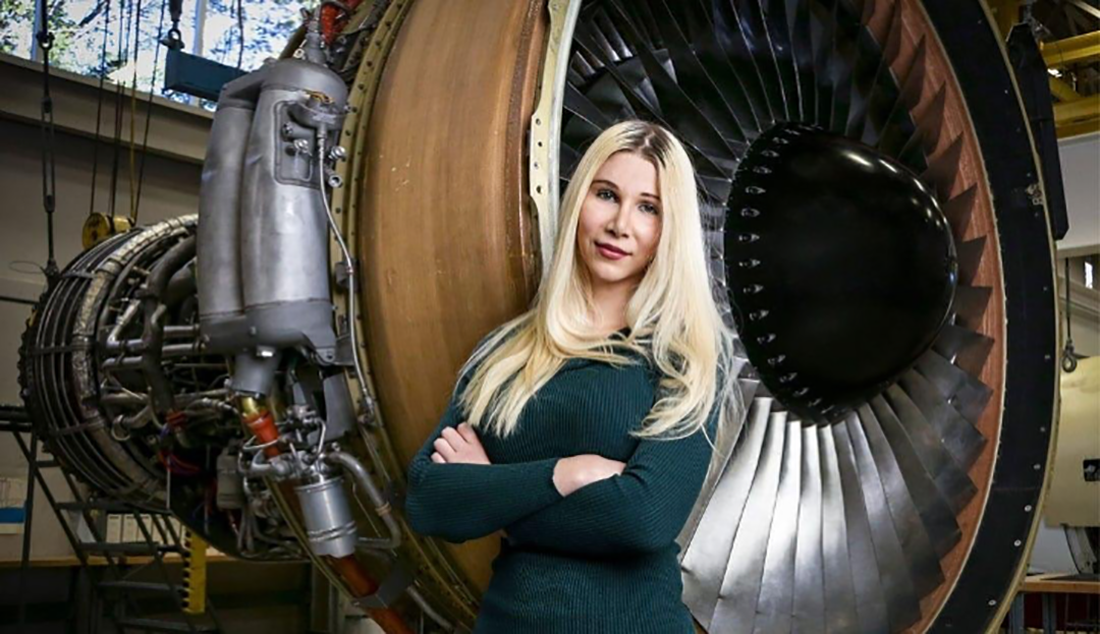 As we celebrate Pride Month, GE Aviation’s Lauren Duncan
shares her personal story and journey as well as her advice
for creating a more inclusive world.

“Even though we hit it at 99.5% on-time delivery to when the proposal was due, are we doing it efficiently? It took a bit of discussion to say, ‘Well yeah, but maybe it's costing us three times what it should to get it out on time.’ Until we laid this all out, we couldn't see that we had so much waste upstream.”