By the last event Sunday at Oshkosh 2022, a finale that saw commercial, general aviation, and military aircraft glittering in the skies above Wisconsin’s Wittman Regional Airport, more than 650,000 people from 92 countries had experienced the magic of the weeklong festival. Dubbed the Woodstock of aviation, and officially known as EAA AirVenture Oshkosh, it’s the largest and perhaps greatest of all airshows, gathering pilots, engineers, industry executives, and superfans of all ages to celebrate the best in the business and the stars of tomorrow. With hundreds flying in and camping beneath the wings of their own planes, it’s a communal scene, with beer, bratwurst, world-class aerobatics overhead, and not a few amazing aircraft.

This year’s show included special events and displays honoring the 75th anniversary of the U.S. Air Force. Outside the GE Aviation chalet, visitors strolled a commemorative “heritage walk” — a path lined with eight-foot-tall photo panels depicting iconic military aircraft that flew with GE engines. (See the timeline below.) GE’s long partnership with America’s flying forces began in 1942 — five years before the Air Force became a separate branch of the military, in 1947 — when a GE I-A engine powered the country’s first jet airplane, the Bell XP-59 Airacomet. 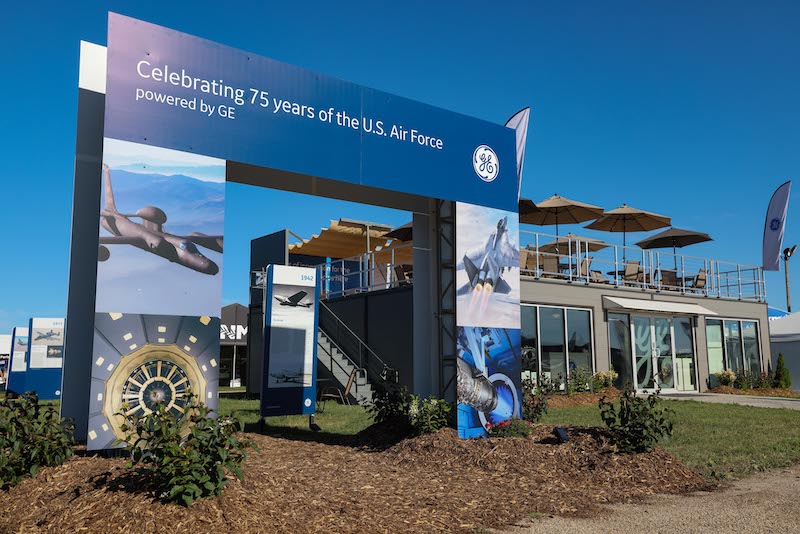 “GE has been at the forefront of military aviation for decades, and our legacy extends all the way back to the U.S. military’s very first jet engine, which was developed at the end of World War II,” says Matthew Gerus, senior director of marketing for combat and military engines at GE Aviation. “The heritage walk featured many of the military aircraft we have developed engines for over the decades — the aircraft that have allowed the U.S. Air Force to become and to remain the most respected air power in the world.”

Teams from GE Aviation and its EU-based Avio Aero business celebrated another important partnership at Oshkosh: their collaboration with Textron Aviation and McCauley Propeller Systems to build the game-changing Beechcraft Denali. 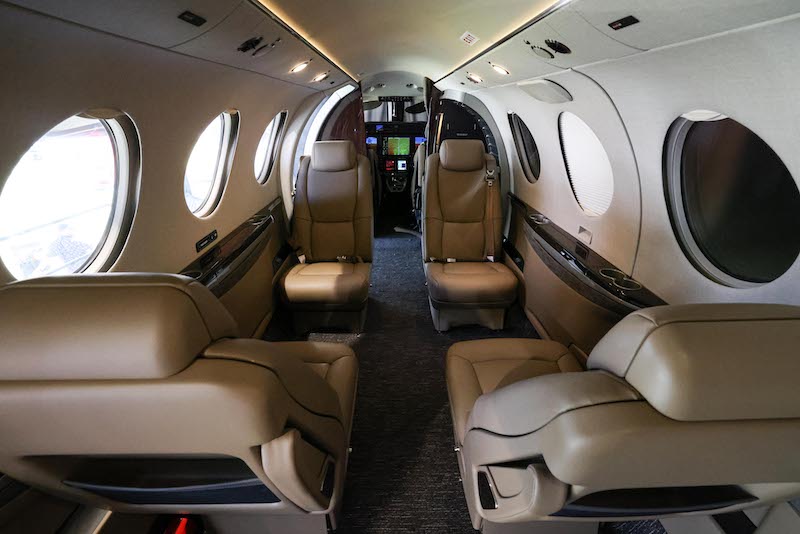 A six-seater single-engine turboprop that completed its second round of flight testing in June, Textron’s Denali promises a jet-like experience for both passengers and pilots, combining a quiet, roomy cabin — the largest in its class — with streamlined cockpit controls. It also uses a high-performance, highly efficient power system, centered on the next-gen Catalyst engine, developed by Avio Aero, and McCauley’s five-blade, 105-inch-diameter C1106 propeller, created with light and durable composite materials. 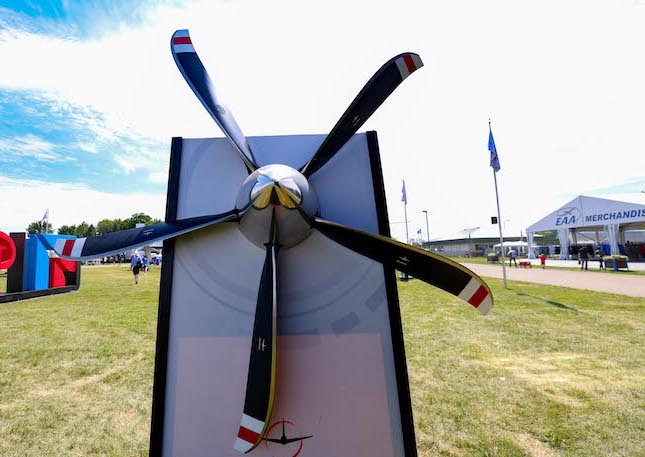 “The Denali is designed to be a flexible aircraft,” says Darrel Hornbaker, Denali program leader at Textron Aviation. “Its size, cabin comfort, and efficiency make it a great fit for charter and scheduled passenger service as well as medevac and other special-mission applications.”

Perfecting the new technologies individually and making sure they worked together in the Denali required extensive cooperation by all parties involved. “As the airframe and engine were being developed, so was the propeller,” explains John Dandurand, vice president and general manager at McCauley Propeller Systems. “All three development teams worked together to optimize product interactions and assure a successful outcome.” 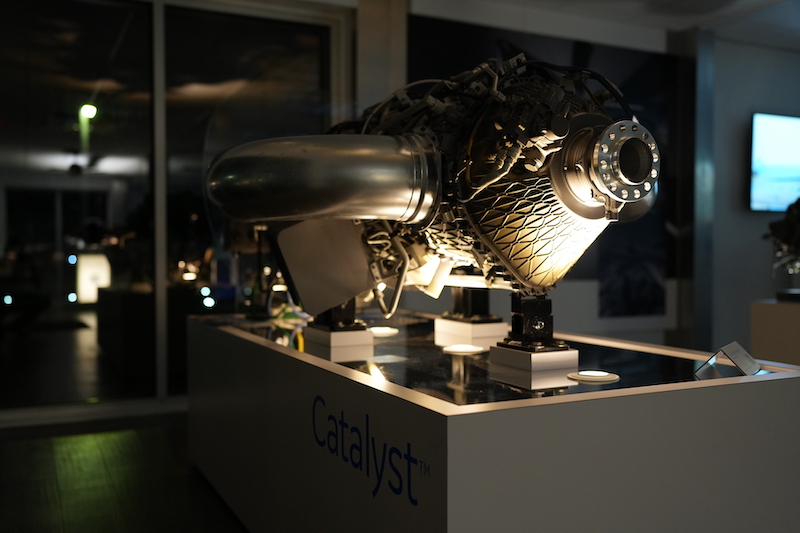 Textron drew visitors at AirVenture Oshkosh with a full-scale mock-up of the sleek, T-tailed Beechcraft Denali, as well as a free-standing model of the McCauley C1106 propeller on display nearby. Meanwhile, at the GE Aviation chalet, a full-scale replica of the Catalyst was popular among tech lovers and potential customers. Though this was not its first appearance at Oshkosh, as the first new turboprop engine to be designed from scratch in more than 50 years — and now with 400 flight-test hours on its résumé — it continues to generate buzz.

In a significant first for turboprop engines, 3D printing is used to create several metal parts in the Catalyst. Known as additive manufacturing in the industry, the process helps create an engine with fewer parts (and fewer weight-adding part connectors), making the Catalyst lighter and more efficient than its competitors in the same class.

Efficiency also gets a boost from the Catalyst’s full-authority digital engine control (FADEC) technology, which closely monitors and adjusts every aspect of the power system — including the propeller — throughout a flight. Found only in jet engines before now, FADEC guarantees that a plane will fly with maximum efficiency from takeoff to landing. In addition, it allows pilots to fly using just one power control lever, rather than the three found in turboprop cockpits of the past. 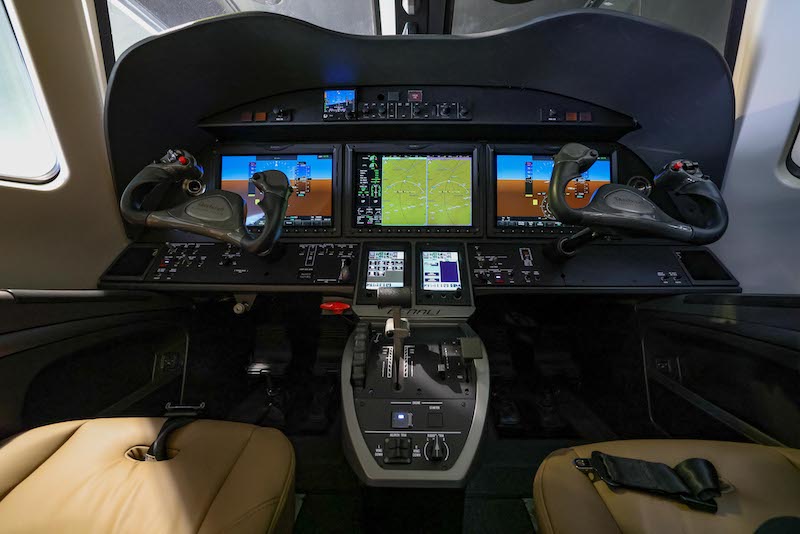 “With the burden of elevated gas prices, as much as a 20% improvement in fuel efficiency is an attention-getting highlight of the Catalyst engine,” notes Joshua Hobson, senior customer leader at GE Aviation Turboprop. This also means an up to 20% reduction in carbon emissions, and further reductions could be achieved through the use of sustainable aviation fuels (SAFs), which the Catalyst is designed to be compatible with.

“Customers are elated to see engine competition in this market segment, driving much-needed innovation and change from the key engine manufacturers,” says Hobson. “There’s also a high level of interest in hybrid-electric propulsion, and the Catalyst is well positioned within the segment to support advanced studies and development due to its capacity to generate up to 1 megawatt.”

There’s more work to be done this year, and engineers on the Denali, Catalyst, and C1106 propeller teams are focused on their next immediate steps. It’s a collective to-do list that includes starting flight tests with a third Denali aircraft, likely in the coming weeks.

“A third aircraft is expected to join the flight test program, along with the prototype and first pre-production aircraft, which have accumulated over 370 flight hours to date,” says Hornbaker. “The new, clean-sheet design will be thoroughly evaluated and refined during the flying tests.”

“We’ve already delivered a third engine to Textron,” adds GE Aviation’s Hobson. “The feedback from pilots has been tremendous, with the engine meeting or exceeding all performance expectations.”

With the Denali project moving ahead successfully, GE and Aero Avio Aero are working on new applications for the Catalyst and continuing to expand on its technologies. 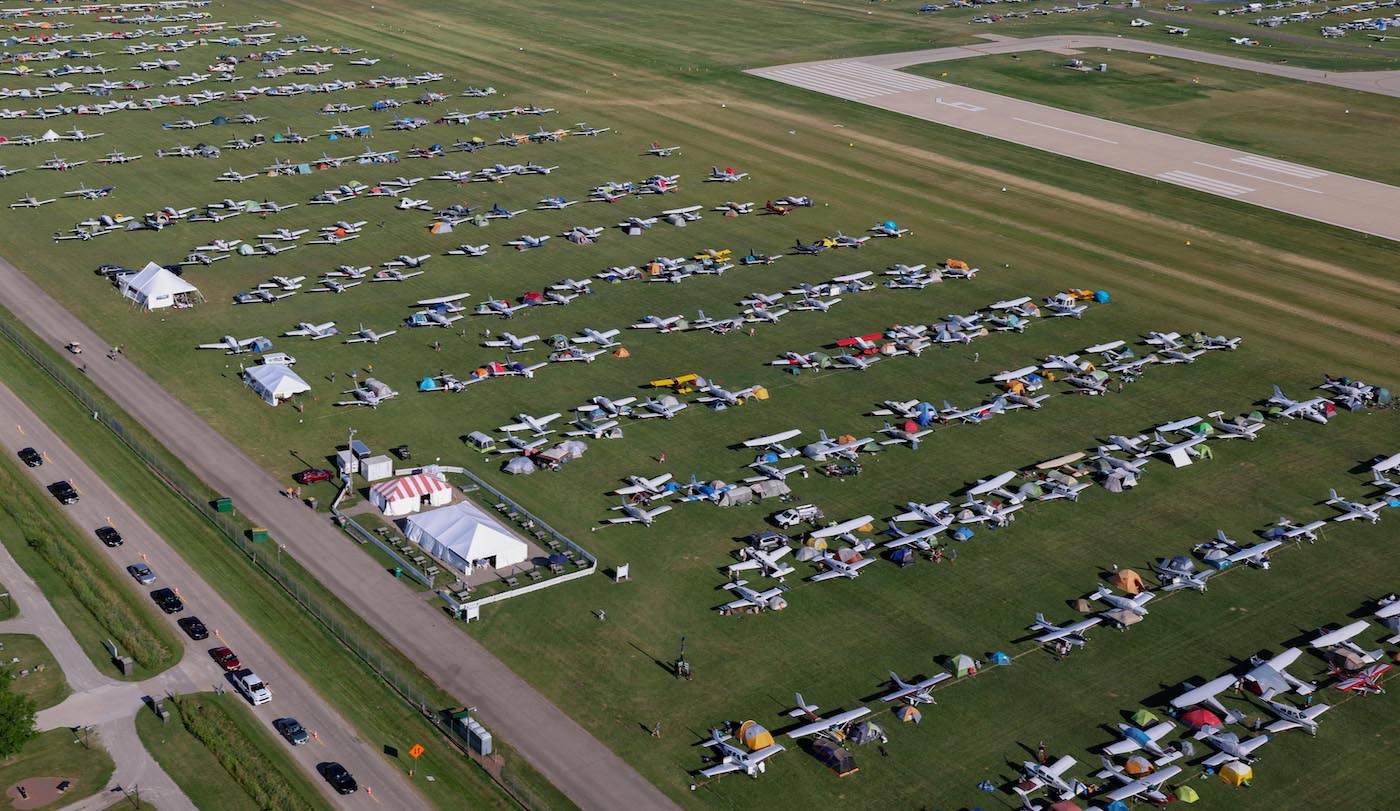 GE engines have powered iconic American military planes since the dawn of the jet age. Here’s a timeline, as showcased on GE Aviation’s heritage walk at EAA AirVenture Oshkosh 2022.