XO-rbitant Strength: Electric Exoskeletons Give Wearers The Strength Of A Forklift But A Gentler Touch

In popular culture, automation is generally synonymous with putting people out of work. But in real life it can do the opposite, making workers more effective at the jobs they already have. That’s the case with a full-body exoskeleton under development at Sarcos Robotics, which expects to release a commercial product in early 2020.

The machine, the Guardian XO, wraps around a human body and gives its wearer the ability to lift objects with the strength of a forklift and handle them with the deftness of human hands. A Salt Lake City firm with investment from GE Ventures and others, Sarcos is offering the exoskeleton for a wide range of commercial applications, including work in factories and mines and at construction sites.

Full-bodied, powered exoskeletons have been under development for decades, but earlier prototypes were typically tethered to a power source. What’s held them back from commercialization is the lack of batteries capable of generating the power needed to perform heavy tasks. In recent years, however, batteries have improved greatly. And Sarcos engineers, through assiduous engineering of the actuators, sensors and computers that go into an exoskeleton, managed to design machines that operate on less power. The Guardian XO consumes less than 10 percent of the power of some of the first prototypes, says Kristi Martindale, Sarcos’ chief marketing officer: “The first prototype 10 years ago was hydraulically powered and drew 6,000 watts. Now it’s less than 400 watts of power for the whole suit.”

These developments mean an exoskeleton can work an 8-hour shift without having to be plugged in, which brings it into the realm of a commercial product. “It’s one thing to make a very expensive robot in the lab,” CEO Ben Wolff told IEEE Spectrum. “We’re finally at the point where the exoskeleton’s capabilities coupled with the economics make it a viable product.” 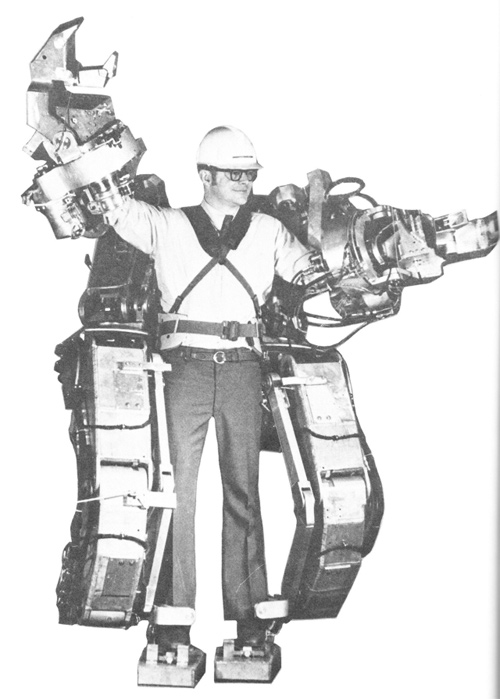 Above: GE’s Hardiman, developed in the 1960s, could lift 1,500 pounds. Image credit: Museum of Innovation and Science Schenectady. Top: Sarcos' sleek Guardian XO exoskeleton can work an 8-hour shift without having to be plugged in. Image credit: Sarcos.


Sarcos is offering two models: the XOS, which allows workers to lift 35 kilograms, and the XO, which can lift 90 kilograms. The machines are expected to find their way into diverse industries. Schlumberger, an oil-field services company and one of Sarcos’ investors, may be interested in using the device to help workers during construction and repair jobs on oil rigs. Caterpillar, which makes cranes and other machines that move and lift heavy objects, is considering selling the exoskeleton through its distribution channels. Automakers are also interested in using exoskeletons in their factories.

Another potential customer is GE, which has many businesses that involve employees working out in the field. “These kinds of exoskeletons can eliminate overhead cranes and forklift trucks, which drive the structure of the factory,“ says Ralph Taylor-Smith, managing director of GE Ventures. “That limits the flexibility of a factory. The thing about an XO is it enables the heavy lifting and gives you a similar degree of flexibility a human has. It allows you to make a factory with more of a human workflow.”

Flexibility is also important in many construction applications that have resisted automation. For instance, one drywall manufacturer, says Martindale, was interested in using exoskeletons to install sheets of drywall in buildings. The sheets can weigh as much as 200 pounds, which makes them difficult to handle for humans — and yet the work of installing them is too intricate for robots to complete by themselves. In part because the work is so physically taxing, the labor market is tight. “This is repetitive work, so people can only work so many hours a day, and so many years, before their body starts to fatigue,” Martindale says.

Over the next year, Sarcos will be testing the exoskeletons to make sure that human operators can work in them safely, without strain or fatigue. Engineers will be fine-tuning the exoskeleton’s internal sensors, which anticipate movements of the operator’s arm to reduce the amount of muscular force that has to be exerted. In addition, the company, working with an advisory group that includes potential customers, will make sure the robots have the capabilities that the marketplace will demand. For instance, a robot that moves luggage in an airport needs a different “end effector” — basically, the robot’s hand — than one that handles pipes on an oil rig or holds drywall in place.