Larger Than Life: Ted Ingling Started Out As Car Mechanic. Now He Is Building The World’s Largest Jet Engine

When Ted Ingling was growing up in a small town in Michigan, he wanted to be a car mechanic. But the plan didn’t work out, and the world might be a better place for it.

Instead of replacing brake pads and gaskets, Ingling has spent the last 30 years developing efficient engines for jetliners that have made hopping from continent to continent in a matter of hours easier than packing for a summer holiday. Today, he is the general manager for the GE9X engine program, the world’s largest commercial jet engine, which GE Aviation has developed for Boeing’s next-generation wide-body jet, the 777X. Consider that at more than 11 feet in diameter, the whole engine is as wide as the body of an entire Boeing 737. “The technologies I’ve worked on are out of this world,” he says. “I never have a dull moment.”

We caught up with Ingling before the Paris Air Show last summer. Here’s an edited version of our conversation.

GE Reports: How do you build the world’s largest jet engine?

Ted Ingling: I like to start every discussion about the size of the GE9X engine by pointing out what came before. It feels like it’s big and new and really stretching the boundaries, but it’s also rooted in a fifth generation of engine architecture. The big, clean sheet of paper was the original GE90 engine we developed for the Boeing 777 and launched in 1990. Having said that, it’s bringing these technologies to bear to achieve a 10 percent fuel improvement, compared to the GE90-115B, the world’s most powerful jet engine and the most advanced GE90 engine in service today. These fuel savings are really the hallmark of the engine.

GER: How did you do that?

TI: The size of the engine is certainly a part of getting the performance. We are chasing what we call the bypass ratio. It describes how much air goes around the core of the engine versus how much energy it takes to drive the large fan at the front of the engine.

GER: Let’s slow down here. Can you explain to readers how modern jet engines work?

TI: The jet engines powering virtually all passenger jets are called high-bypass turbofans. That’s because the vast majority of the thrust comes from the fan at the front of the engine. You can see the blades of the fan when the plane is parked at the gate. The fan of the GE9X is more than 11 feet in diameter — 134.5 inches. You also get some thrust from the core, which generates a high velocity and high temperature jet of air, but the core’s main function is to drive the fan.

GER: How does this design compare to early jet engines?

TI: The original jets used the core to generate all of the thrust. The air traveled inside the engine, mixed with fuel in the center, ignited, and went out the other end. They were noisy and not very fuel-efficient. By expanding the front fan on commercial engines around the core, we were able to preserve the aircraft speed that people have gotten accustomed to and deliver great performance by getting the bypass ratio to more than 10:1, which is what we achieved on the GE9X. That engine is sending 10 times more air around the core and through the fan than through the core. 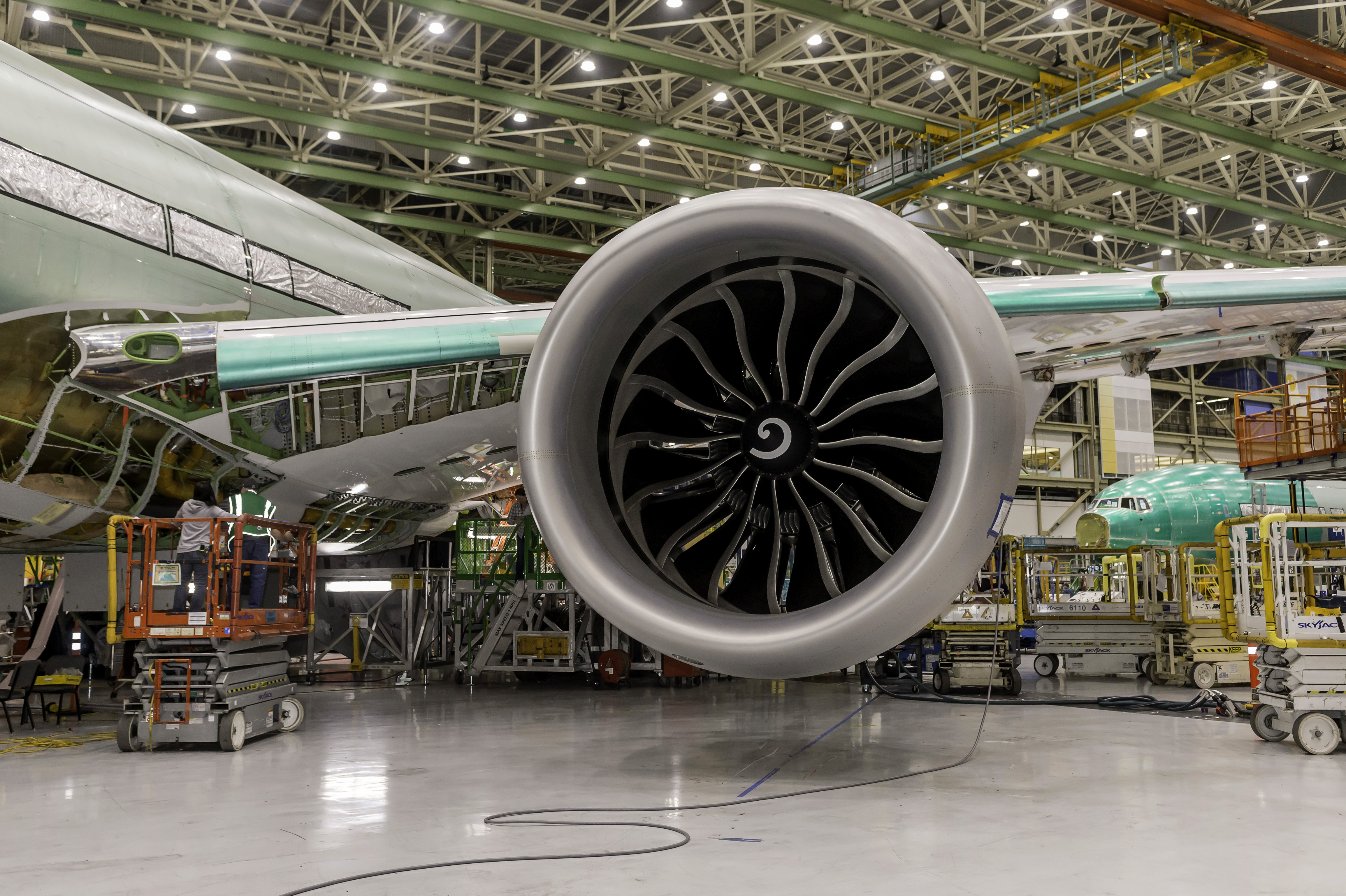 Top image: Ted Ingling, the general manager for the GE9X engine program, unveiled the GE9X jet engine at the Paris Air Show on Monday. Image credit: Tomas Kellner for GE Reports. Above: GE Aviation developed the engine, the world's largest commercial jet engine, for Boeing’s next-generation wide-body jet, the 777X. At more than 11 feet in diameter, the whole engine is as wide as the body of an entire Boeing 737. Image credit: Boeing.


GER: So, in the future we will have engine behemoths with larger and larger fans?

TI: It’s not so simple. Bigger isn’t always better because you are also adding weight and drag to the plane. Also, the airplane has to accommodate the bigger design. You have to be able to take off and land.

GER: How do you find the right size then?

TI: It’s an iterative process internally at GE Aviation and also with Boeing, in this case. They are building a plane, the 777X, which has 20 percent better fuel economy than the existing Boeing 777-300ER, one of best airplanes out there, and at the same time can carry more passengers the same distance. Together we have to figure out what’s the best combination of engine, wing and airplane to do that.

About half of the fuel savings come from the design of the airplane. For example, Boeing has designed large all-composite wings with folding wing tips that provide a dramatic improvement in drag and lift. The other half comes from the engine.

GER: What technologies allowed you to get there?

TI: The fan is a great example. Starting with the GE90, all of our large new engines have fan blades made from a carbon-fiber composite material. The composite is tough, but also much lighter than titanium. We spent many years getting it right, but the effort paid off. The material allowed us to reduce the weight of the engine by hundreds of pounds.

But the blades on the GE9X are very different from their first iteration in 1990. Using new computational tools, for example, allowed us to refine the blades and optimize their solidity and the shape for performance. If you look at the original GE90 blade, it was pretty straight and lightly flared at the root and the tip. We now have a sweep and tilt built into the blades that make them look completely different. We are also using new techniques to reinforce the leading edge of the blades with steel, rather than titanium, which gives them higher strength. As a result, we were able to reduce the number of the blades from 22 on the GE90 to just 16 on the GE9X. Although we are already on the fourth generation of the blades, we are still the only engine maker that makes composite fan blades.

GER: Are you using 3D-printed parts inside the GE9X?

TI: Yes, we have seven 3D-printed components inside the engine. We print relatively small parts like temperature sensors, a part of the combustion system we call a mixer, which mixes the fuel and the air, and the fuel circuits for the fuel nozzles, as well as larger components like a heat exchanger, a particle separator that prevents airborne dust and debris from entering the core, and even foot-long low-pressure turbine [LPT] blades.

GER: Is the GE9X the first GE jet engine with 3D-printed parts?

TI: No, the GE90 was the first engine to use a 3D-printed temperature sensor. But the sensor was a relatively simple part. The heat exchanger, for example, is a complex component we used to make from dozens of narrow metal pipes nestled together. Additive manufacturing gave the thermal engineers the freedom to come up with the best design without worrying about production costs. 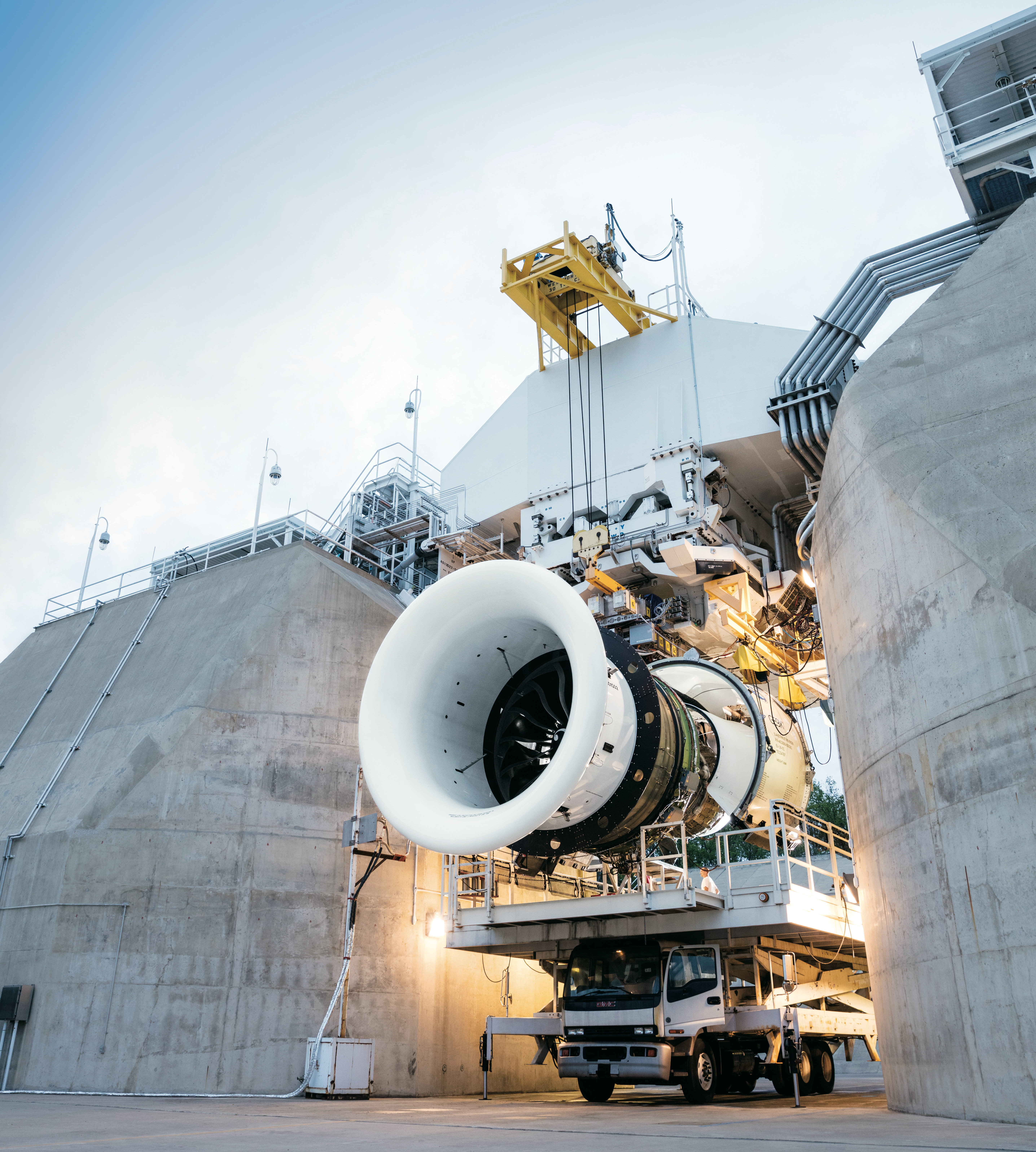 The fan of the GE9X is more than 11 feet in diameter — 134.5 inches. But Ingling says that a 10 percent fuel improvement compared to its predecessors is "really the hallmark of the engine." Image credit: GE Aviation.


GER: Do you use 3D printing just to manufacture parts?

TI: No. It also helps us during the design phase. For example, designing the combustion system for a jet engine the traditional way can take 18 months, and you have to spend money on tooling to cast the prototypes. Imagine trying to iterate, learn something new, refine your design, test it and iterate again if it takes months just to build your tooling. We found, quite frankly, that additive manufacturing is quite powerful, especially in the early phases of development, where it allows the design team to iterate on concepts much faster.

GER: Is the GE9X using any technology that’s not inside the GE90?

TI: Yes, we are using parts made from a light and heat-resistant material called ceramic matrix composite. This material is very different from the carbon-fiber composite we use for the fan blades. It’s one-third the weight of steel, but it also can withstand temperatures where most metal superalloys grow soft. It took us 30 years to develop the technology at GE Global Research, our corporate labs, and we pioneered it inside the LEAP, a jet engine built by CFM International, a 50-50 joint venture between GE Aviation and Safran Aircraft Engines. The LEAP is the best-selling engine in CFM’s history, with orders topping $220 billion. Because of that program, we now know how to mass-produce parts from the material and design new parts that take advantage of its properties.

GER: Why does the material matter?

TI: Remember when I told you about how we’re the chasing bigger bypass ratios to make our engines more efficient? The ceramics allow us to do that by making the core of the engine smaller.

GER: Rather than making the fan bigger?

TI: Yes. We want the bypass ratio as big as possible, and we can do that by shrinking the physical size of the core and still producing the necessary power to drive the fan. We do this by increasing the pressure ratio inside the core, which allows us to get more energy from a smaller volume. As a result, we get a larger natural bypass without having to take on the drag and the weight from growing the fan bigger. Essentially, we shrink the core and make the engine a little smaller on the inside so the fan doesn’t have to be as big.

GER: This is brilliant, but this miniaturization of the core must involve some extreme engineering.

TI: Right, this is where the ceramic matrix composites come in. Squeezing the pressures inside the core also raises the temperature. The ceramics can handle as much as 2,400 degrees Fahrenheit and allow us to increase the temperature. We can turn this increase in temperature into extra performance. 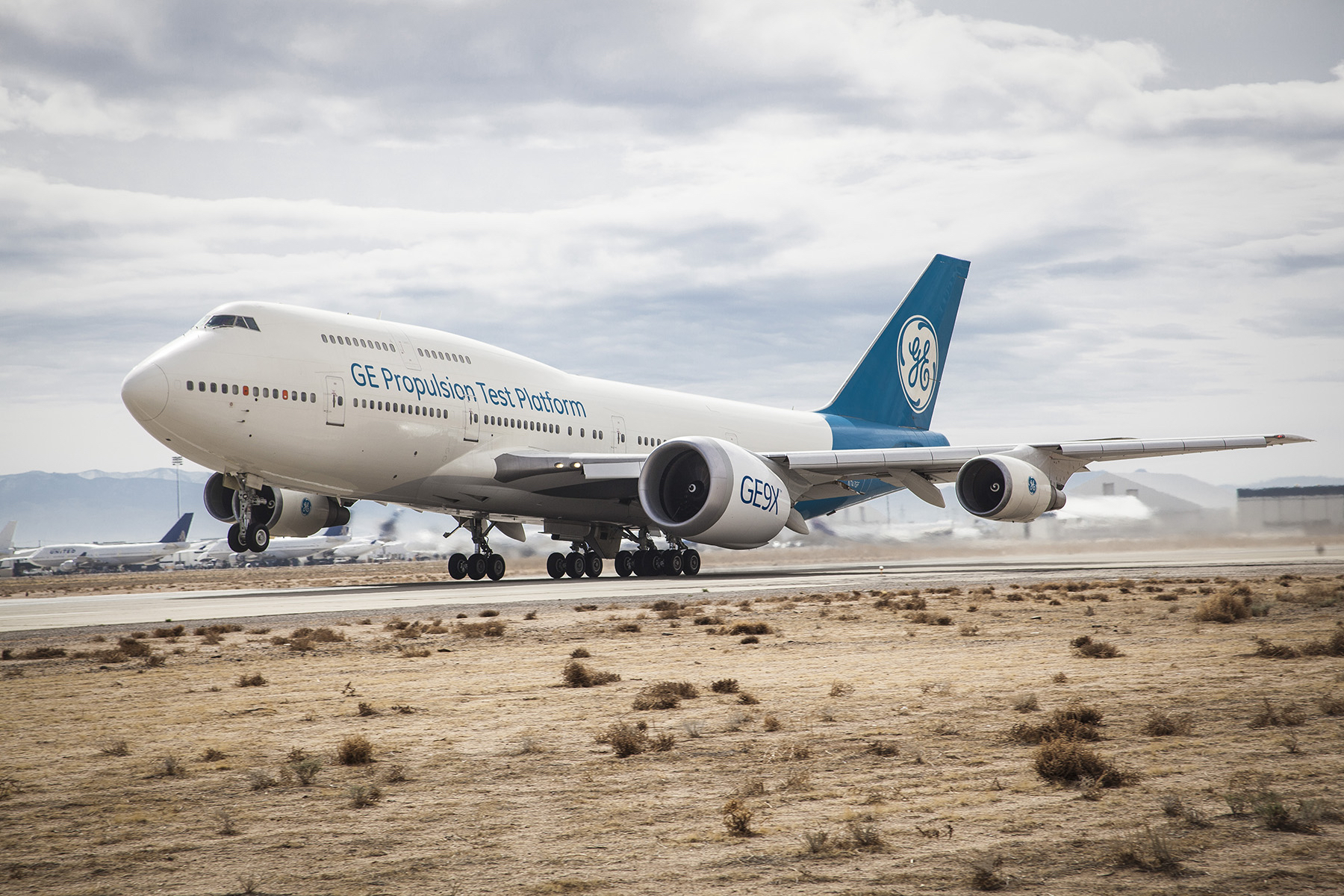 
GER: How large is the pressure ratio?

TI: The pressure ratio between the front and end point of the compressor in the GE90 engines is around 40:1, basically 40 times the atmospheric air pressure. Our next large engine, the GEnx, which powers many Boeing 787 Dreamliners and the latest variant of the Boeing 747 jumbo jet, has a pressure ratio of 50:1. But the ceramics allowed us to go to 60:1 inside the GE9X. That’s huge. As result, the GE9X engine is not dramatically larger than engines in the GE90 family, even though it’s much more efficient.

GER: Have you always been interested in building jet engines?

TI: I discovered jet engines later in life. I’m from Michigan, a rust belt automotive junkie. After high school, I worked as a car mechanic full time and thought that would be my career. But after one year of working 60-hour weeks and seeing my friends in college, I realized that maybe this wasn't the long-term career path for me. My dad was extremely happy when I told him that I was going to give college a try.

GER: Did you study aerospace engineering?

TI: No, I thought engineering school would be a good way to enter the car industry, but when I graduated, the automotive industry was in one of its big downturns. I started looking for a job, and I actually didn't know GE made jet engines when I set up my interview with them. But I quickly fell in love with the aviation industry. The technologies I’ve worked on are out of this world. I never have a dull moment.