The U.S. Navy has commissioned for service the USS Zumwalt, its largest and most advanced stealth destroyer. The ceremony took place in Baltimore on Saturday.
Named after the late Adm. Elmo “Bud” Zumwalt Jr., the 610-foot-long, all-electric "multi-mission" ship was built at General Dynamics Bath Iron Works in Maine. The Navy estimates the 15,600-ton vessel can hit a target at a range of more than 60 miles. It also has a wave-piercing tumblehome design and a unique superstructure that make it less visible to enemy radar at sea.

The ship is equally innovative below deck. Traditionally, the Navy powered its vessels with gas turbines driving controllable pitch propellers through large and complex gearboxes. But the new destroyer has on board a 78-megawatt power station supplying electricity to an advanced integrated power system (IPS). GE Marine designed the system, which powers giant GE induction motors connected directly to the propeller shafts and routes electricity to a vast array of sensors, weapons, radar and other critical systems on board.

As a result, the ship will have nearly 10 times as much available power as its predecessors. In fact, the Zumwalt could become the first ship carrying next-generation weapons such as electromagnetic railguns, which use a strong electromagnetic pulse, rather than gunpowder, to shoot projectiles. “We’re no longer restricting the engines to provide propulsion power only,” Adam Kabulski, director for naval accounts at GE Power Conversion, told GE Reports. “This design allows you to send electric power wherever you need it. You can access many megawatts in a short amount of time and convert it into energy. It’s instantaneous.”

The system is also highly redundant. Instead of the typical three-phase motors, the Zumwalt’s advanced induction motors have 15 phases. Kabulski said that by simply reversing the direction of the rotating magnetic field in the motor, for example, the shaft can turn in the opposite direction to give astern power. “The design is innovative, being smaller and quieter than traditional motors, and also highly survivable,” he said. 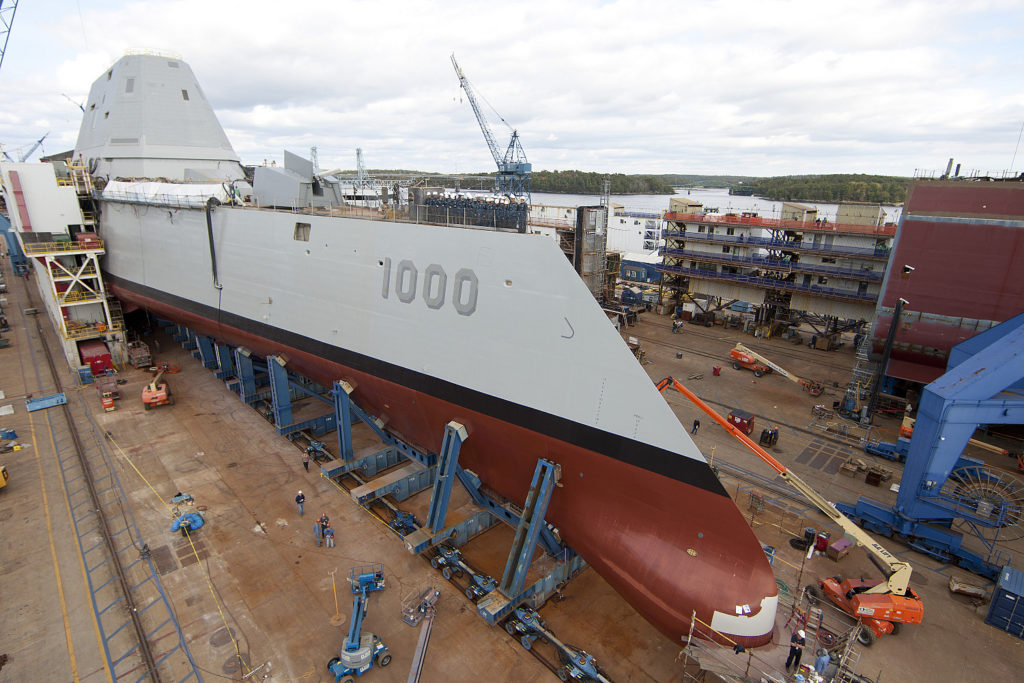 Top: But the new destroyer has on board a 78-megawatt power station supplying electricity to an advanced integrated power system. Image credit: U.S. Navy. Above: The ship in a dry dock during construction. Image credit: General Dynamics

GE has been supplying electric propulsion technology to the shipping industry for a century. The Navy’s first electrically propelled ship, the aircraft carrier USS Jupiter, was commissioned in 1913.

The destroyer spent the last year going through sea trials in the Atlantic Ocean. The Navy said the “ship [would] provide independent forward presence and deterrence, support special operation forces, and operate as an integral part of joint and combined expeditionary forces.”